Mystery Photo No. 59 was forwarded to us by Peter Cannell.

The image (which has been Photo-shopped to remove markings) showed a futuristic looking aircraft which could have been on the drawing boards today: but in fact it was designed and built in the 50s. We asked readers for:

When the Editor first saw it he thought it was a BAC TSR2: a delta-winged supersonic bomber design of the 60s that promised much but which was prematurely cancelled by the Government in April of 1965 before going into production. 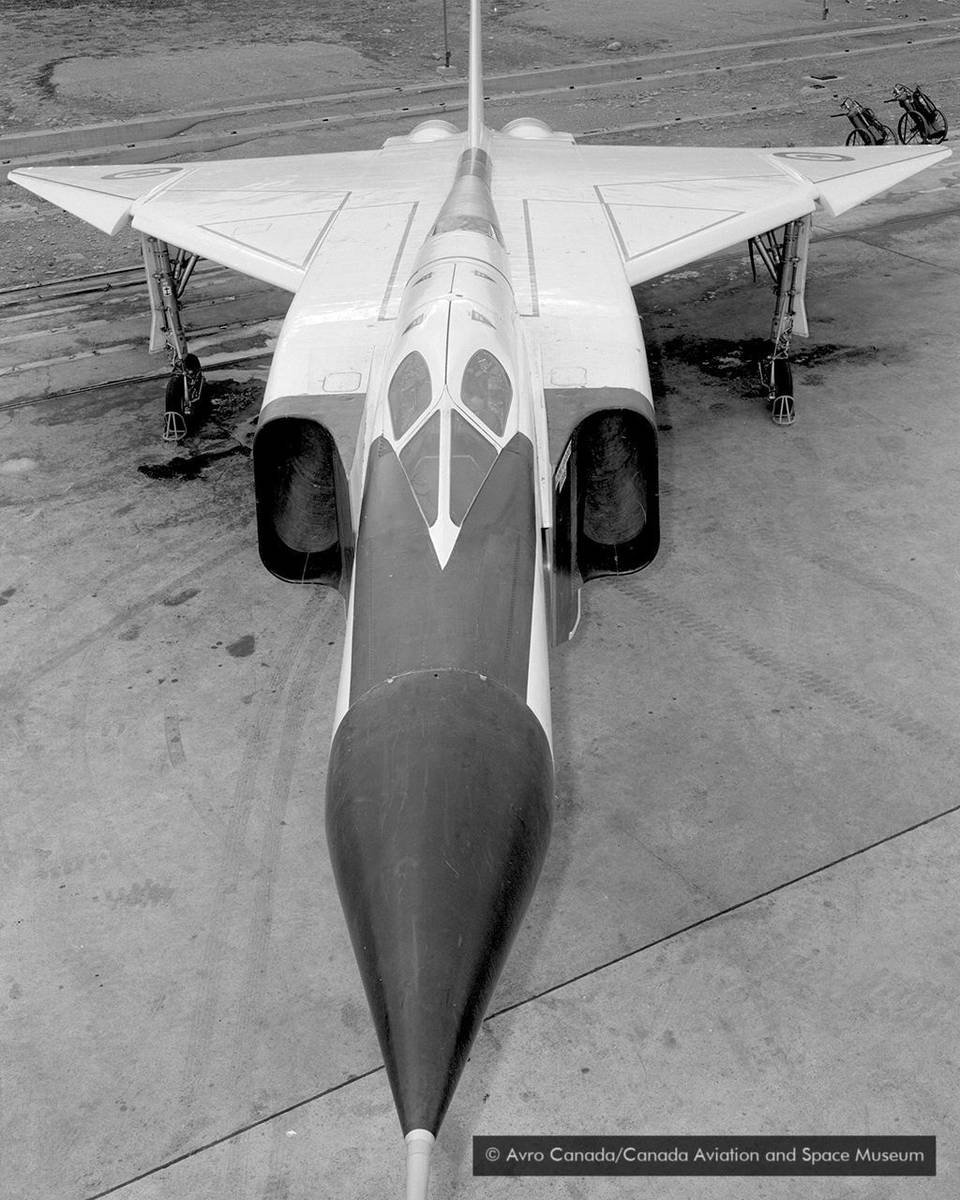 In fact, the aircraft in our Mystery Photo was not British at all:  it was Canadian designed and built during the early years of the Cold War.

During WW2, Canada had ramped up production of British designed aircraft for the war effort, including the Hawker Hurricane and Avro Lancaster.  The end of the war also brought and end to this demand, so the Canadian Government decided to develop a world-leading aerospace industry. Amongst the innovative designs that came out of the factory doors was a revolutionary fighter that challenged the very cutting edge of technology of the time.

This was the Avro CF105 Arrow, which was first shown to the public in October of 1957.  Designed to fly at close to Mach 2, the beautiful delta-wing aircraft presented in gleaming white livery and represented the pinnacle that the best brains in Canada could develop.

The development of the Arrow had taken an astonishingly short time: just 28 months from its first drawing to roll-out of the first aircraft.  It had fly-by-wire technology, new materials and a brand new supersonic engine.

By early 1959 there were five flying prototypes, another fitted with an engine ready to fly and a further four in various stages of construction.  Proposals for even faster versions were in the pipeline too:  Mach 3 and a Mach 5 ‘hypersonic’ model. 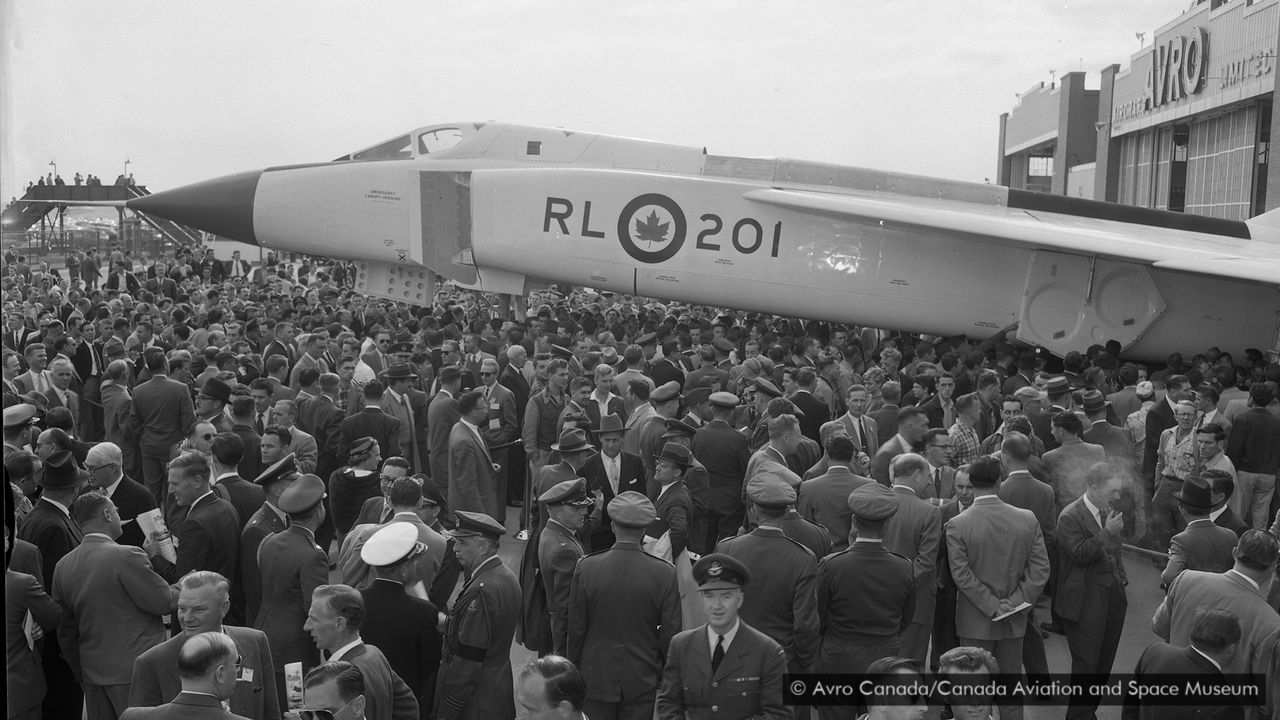 But the expenditure by then had ballooned out to the equivalent of over US$1.6 billion in today’s money, and further development costs stretched out into the future.  It was deemed too expensive and on “Black Friday” (20 February 1959) the newly elected Government of Jon Diefenbaker cancelled the project without notice.  Thousands of skilled workers lost their jobs – many to ‘defect’ to the United States where they played an important part in the future of that country’s aerospace programs, including by an ‘Avro Group’ embedded in NASA’s Apollo program.

In an act of complete bastardry the prototypes were cut up on the shop floor and engineers were told to destroy the blueprints.  One of them – Ken Barnes – was so appalled by the decision that he hid the blueprints in his basement where they were only discovered after his death.  It fuelled hope that perhaps one of the actual prototypes had been smuggled overseas too, leading to conspiracy theories that persist to this day.

Within three years the Avro Aircraft company of Canada had gone, with  the loss of about 50,000 jobs.  Astonishingly, the Canadian aerospace industry survived the shock, and is now the fifth largest in the world.

The failure of the project brought home a hard truth: that small countries like Canada simply could not support the enormous cost of designing, developing and building advanced aircraft.  It was a lesson that Britain was to learn not long afterwards when the TSR2 met a similar fate, and which led to a ‘consortium’ approach whereby smaller nations would look to share research and development costs of advanced aircraft, such as with Concorde and the Eurofighter Typhoon.

The sheer beauty of the Arrow’s design and its untimely end has haunted aviation enthusiasts for decades, though – to the point where, in 2005, the Avro Museum approved a budget to build a flying 60% scaled down version of the Arrow.  Known as the “Arrow II” project, the Museum remains committed to this goal.  You can see updates of progress and many photographs and videos of the project here.   We have reproduced a few of them below, acknowledging the Avro Museum as their source. 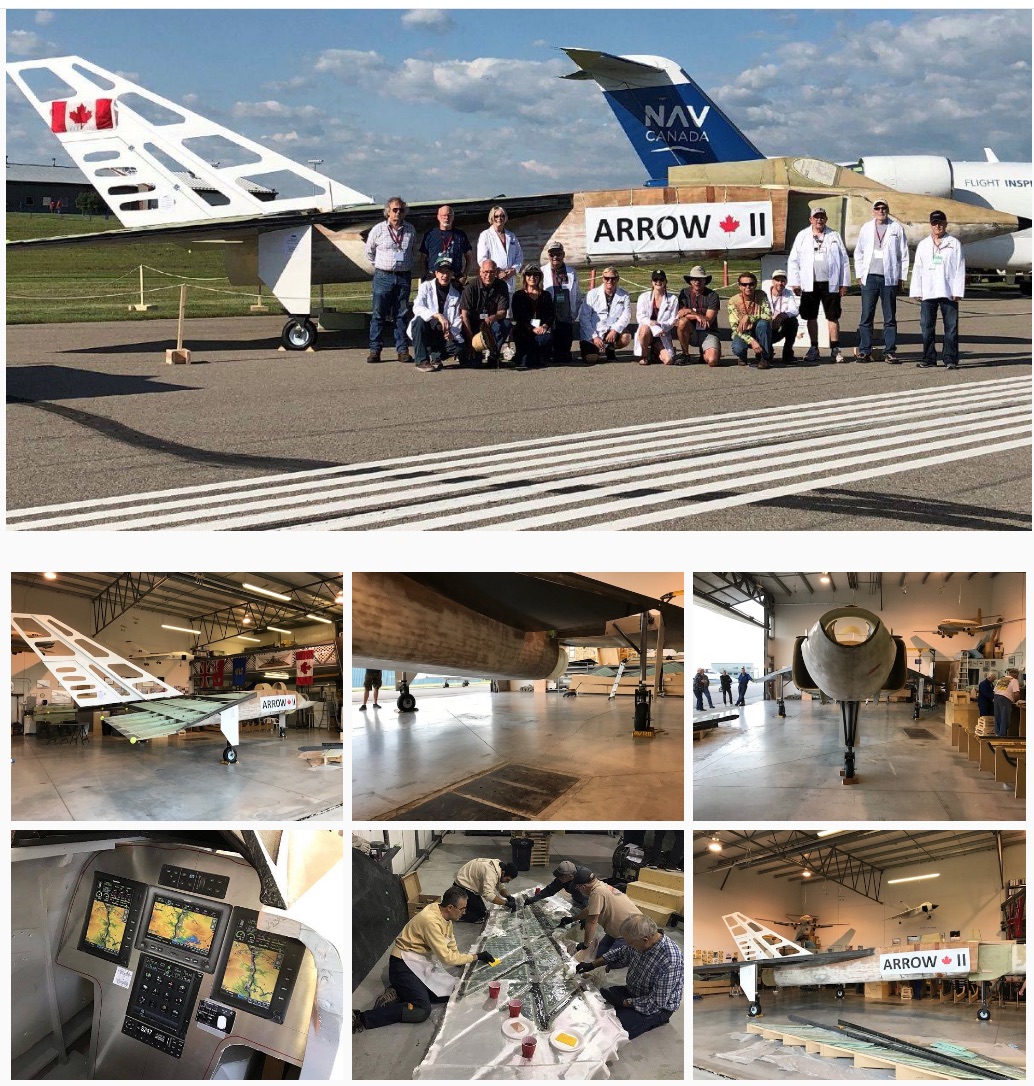 Above.  A compendium of photos of the “Arrow II” project currently being undertaken by the Avro Museum of Canada. You can see these, and many other photos and videos, on the Avro Museum’s website here.  In January 2019 the project was reported as being 70% complete.

The most recent project progress report on the  Avro Museum Website was January 2019, which made us wonder what has been happening in the intervening 18 months.  We wrote to the Museum on 10 August 2020 and received the following update:

“The Arrow ll project is alive and well and progressing.  First flight is scheduled for about 3 years from now.
Since the website was last updated with pictures we have dismantled a Learjet for the engines for the Arrow II (same engines as in the F-5 except no afterburners), and have stripped down and disposed of or are in the process of selling off everything salvageable from the Learjet.  We have cleaned up and rearranged the hangar to get back to work on the Arrow ll.  We have added fuel tanks into the wings, ahead of the landing gear, and are currently installing the tail on the Arrow ll.  Work is also progressing on the flight simulator with a full glass instrument panel being assembled as I speak.  We are also adding motion control to the cockpit mockup.

You may wish to inform your members that they can sign up for the free Avro Museum Newsletter here.  It currently is distributed every 3 months.”

An excellent YouTube video on the development and subsequent cancellation of the Avro Arrow can be seen here.