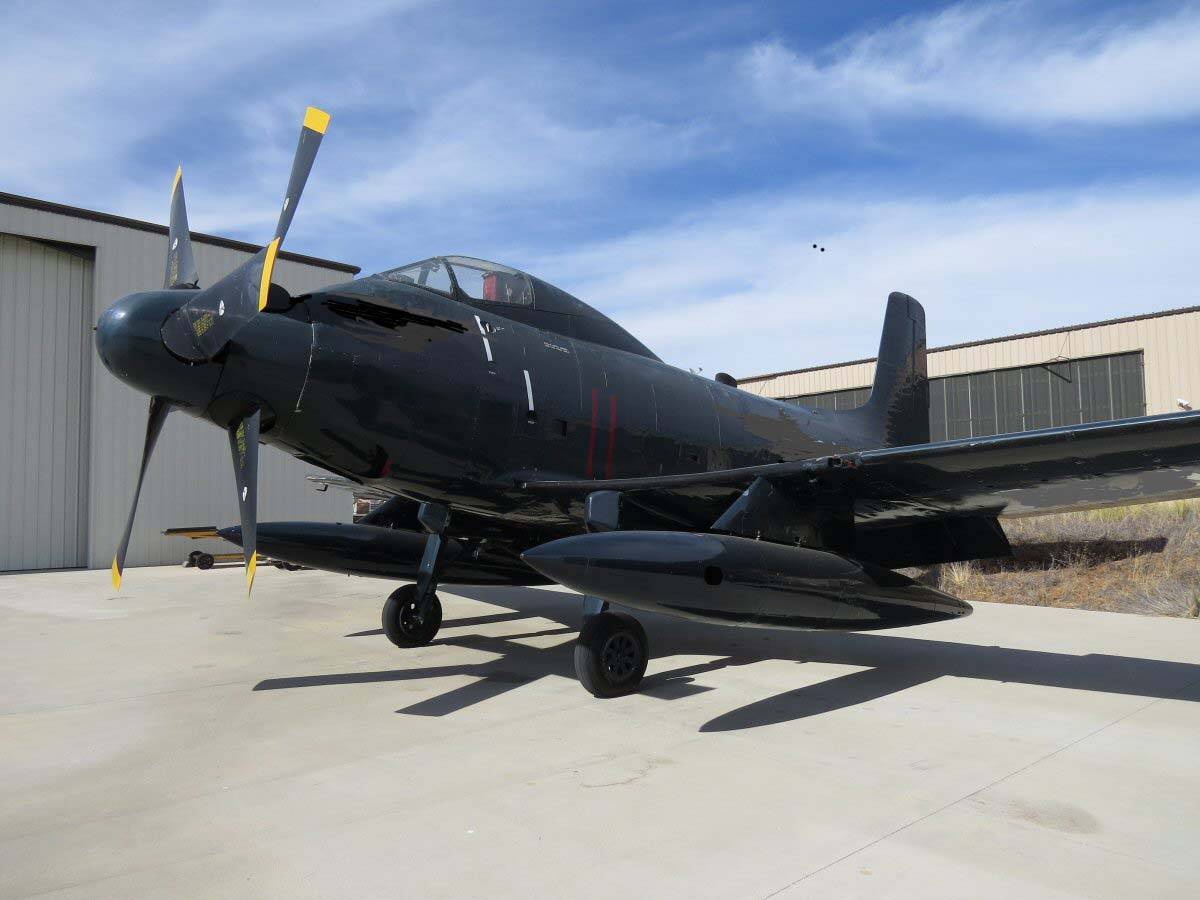 We asked our readers who the manufacturer was, and to tell us a little about its development and history.

By the late 40’s jet aircraft were becoming faster and more capable, but there were those in Naval Aviation who considered pure jets weren’t ready to operate from ships at sea.  They believed that turboprops were the way forward, particularly for smaller fleet carriers.

In June of 1947 Douglas Aircraft received Navy’s letter of intent and work on the turboprop commenced. It was fashioned around their piston-powered AD Skyraider but featured  the Allison XT40-A-2 turboprop engine, which consisted of two T38 engines linked to a common gearbox and intended to provide 5,100 shaft horsepower through two coaxially mounted contra rotating propellers.  The Douglas advertising blurb boasted this carrier-based attack plane possessed “the latest design innovations” and would “outstrip all its predecessors in performance.” They called it the A2D Skyshark.

Two prototypes were ordered, designated XA2D-1 (the “X” denoting “experimental” status). They were huge.  Each aircraft had a wingspan of over 50 feet and weighed 18,720 pounds at Max All Up Weight (the specifications were similar to the Fairey Gannet, but it was an anti-submarine patrol aircraft, not a Fighter).  The Skyshark also boasted a maximum speed of 435 knots (500mph), which was fast.  The Navy  was impressed and placed a tentative order for 331.

But engine development problems delayed the first flight until May 1950.  It was a short flight, lasting only a couple of minutes as the test pilot had to set the aircraft down with severe vibrations.   Worse was to follow: in December another test pilot was killed when his prototype struck the ground with a high rate of descent. An investigation found the starboard power plant had failed but did not declutch. The remaining engine therefore had to drive the failed engine’s compressor, taking much of its available power. Further, the propeller did not feather and the combined effect of low power and high drag induced an irreversible and fatal rate of sink.

Redesign took sixteen months, although serial production was ordered which gave the project new life.  In April 1953 test pilot C. Livingston was pulling out of a dive when there was a loud bang and pitch-up, and the windscreen was covered in oil. The chase aircraft reported that Livingston’s propellers were gone.  The combining gearbox had failed – but he managed to dead-stick the aircraft back to a runway.

This event further delayed development into 1954 by which time the smaller USN carriers were all but removed from service, negating the need for fleet turboprop aircraft.  Then a second aircraft crashed (the pilot bailed out but was severely injured).  Douglas engineer Ed Heinemann was overheard saying that the Skyshark ‘had grown like topsy’ and that, in his view, a smaller, simpler aircraft could carry out the mission.  Not long afterwards Heinemann went on to design the Douglas Skyhawk which was as far removed from the bloated Skyshark concept as could possibly be.

Of the 12 completed Skysharks, only eight were ever flown (including the two prototypes.   Only one survives to this day, int he Ontario Air Museum.