Squadrons & Units of the FAA 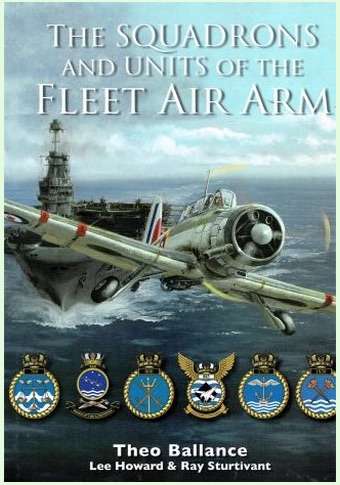 THIS is the third edition of a book by Ray Sturtivant originally published by Air Britain in 1984 but to say that it is an updated version would be a considerable understatement.

It is produced in colour so that squadron badges can be given due prominence and extensive use can be made of colour photographs although obviously the earlier ones are in black and white. Many of the images have never been published before and the overall result can fairly be described as outstanding, making this work visually attractive as well as informative. Unfortunately Ray Sturtivant died before he could see this latest edition of his life’s work completed but his co-authors Theo Ballance and Lee Howard, both of whom I knew when I was curator of the Fleet Air Arm Museum at RNAS Yeovilton, have done it full justice and produced a magnificent book which, at the time of publication in late 2016, was completely up to date.

Previous editions covered RN squadrons from the date when the present unit numbering system was introduced in April 1933 and included RAN and RCN squadrons over the period in which they operated aircraft of British origin such as the Hawker Sea Fury and Fairey Firefly. The new edition goes much further and has complete entries for squadrons of the RAN and RCN to give a full history of the Fleet Air Arm ‘family’. For example the entry for 808 Squadron shows the RN badge and describes the unit up to its disbandment in December 1945. The next sequential entry is for 808 Squadron RAN under the heading 808 Squadron AUSTRALIA, showing its slightly different badge and describing its service from April 1950 when it formed at RNAS St Merryn to the appointment of its latest commanding officer in January 2016. Every other RAN unit is covered in the same way including the RAN Helicopter Flight -Vietnam which forms part of the entry for 723 Squadron on page 27.

Each squadron is given its own section with illustrative photographs of aircraft and a short narrative history. After that there are well-researched notes that give the different squadron markings applied throughout its existence; a list of every ship and base from which it has operated; a list of commanding officers and a list of the aircraft types that it has operated with a specific example of each. For example the latest entry for 808 Squadron shows MRH-90 Taipan A40-017 allocated to the squadron in December 2010 and given the side number 017. In addition to the squadron entries which fill the first 300 pages, the book has a further 186 pages of data including, among many other subjects, ship’s flights, SAR flights, aircraft ferry flights, air-capable ships, naval air stations in the UK and around the world and ships taken up from trade that could operate helicopters.

The normal retail price for this book is £44.75, but as part of a special offer ex-FAA members can buy it through “Navy Wings”  for just  £34.95, a saving of nearly 22% (price does not include postage).  If you wish to take advantage of this amazing offer, please contact the FAAAA webmaster here for the discount code to use when ordering.

Australian readers can find data on the mobile naval air bases set up in Australia during 1945, RAN Battle and Campaign Honours, RAN aircraft code allocations since 1948 and an index that fills 15 pages. The Acknowledgements include grateful thanks to Dr David Stevens, Paul Burnett and Peter Djokovic of the Sea Power Centre – Australia, Terry Hetherington of the RAN Museum – Nowra, Commander Nick Barker RAN, Jeff Chartier and the late Lieutenant Commander Bob Geale MBE RAN and a host of other researchers around the world who helped to make this book as good and informative as it is.

I think that those reading this review will, by now, have realised that I have found it difficult, if not impossible, to avoid the use of superlatives to describe this book. I cannot imagine anyone with an interest in the Fleet Air Arm that has evolved throughout the Commonwealth from its RN origins not wanting to acquire a copy as quickly as possible. The authors should be justifiably proud of this superb work and I cannot recommend highly enough. It is, and will remain, the definitive work on the subject until the authors decide to update it again.

There will be two Memorial events in Western Australia in November 2021. The events are to remember the 80th Anniversary of the loss of the Sydney II and its crew in an engagement with the German Raider Kormoran  which occurred  on 19 November 1941, off the West...

For many years the RAN had a ‘Historic Flight’ (HF), comprising a number of previous Fleet Air Arm operational aircraft. The Flight included two S2-G Trackers, two UHI-B Iroquois, two Westland Wessex Mk. 31B and one C47 Dakota, remnants of a Hawker Sea Fury and a De...