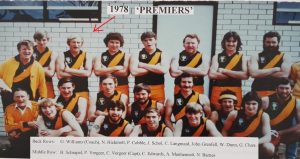 Sad to hear of the passing of Peter Cobble. Peter, born on the 2nd August 1945 passed away on the 10th February 1998. He joined the Navy at HMAS Cerberus in May 1964, later to become a birdie Aircraft Weapons, rising to the rank of Petty Officer.

An early member of the Bomaderry Aussie Rules Club, he became a Life Member.

I will never forget the day he beat the late great snooker champion Eddie Charlton at the Nowra RSL one Sunday morning in the mid 70s. Peter and each challenger was given a 40 points start, Peter was inspired, the only one to beat Charlton, cool under pressure he thrashed Eddie. He received Eddie’s cue as a reward.

Always remember the joy he and his lovely wife Sylvia had for each other.