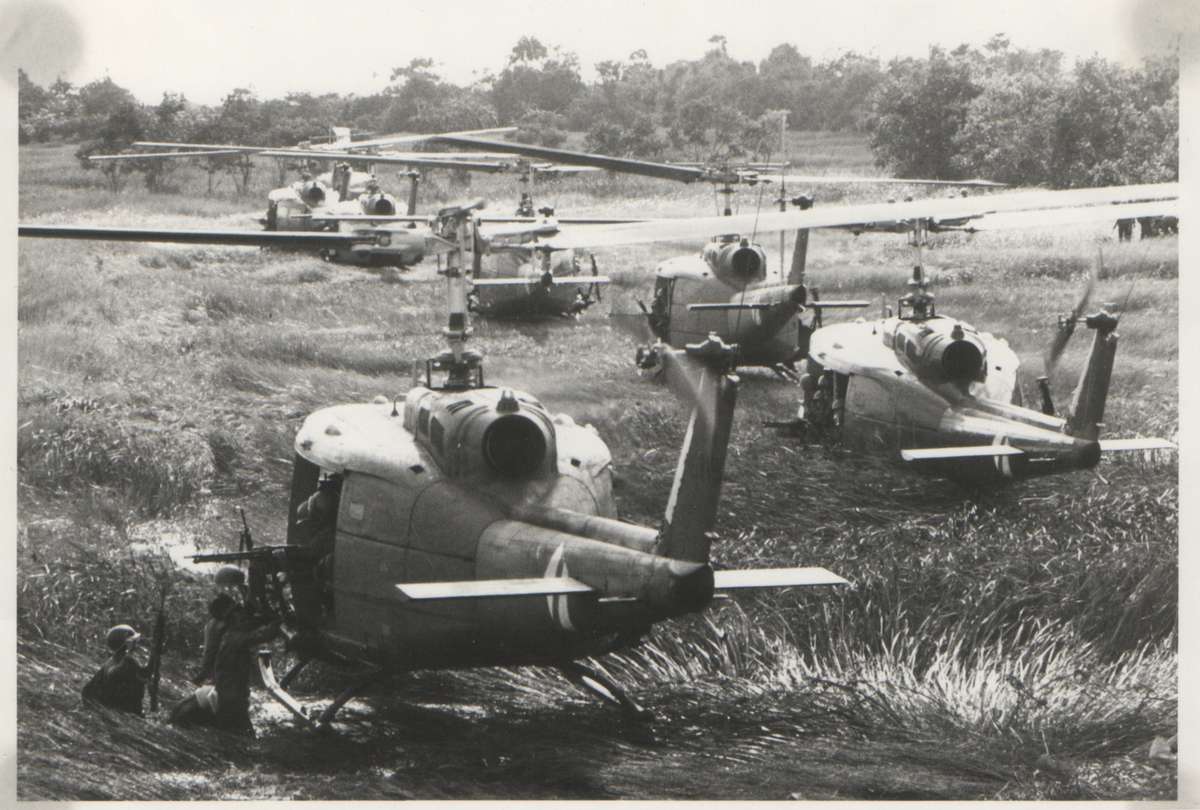 Forty-six years after it was disbanded, the RAN Helicopter Flight Vietnam has been awarded a Unit Citation for Gallantry (UCG).

The actual Citation, which is a rhodium-plated rectangular frame surrounding a ribbon of deep green, is a warrant presented to selected ADF Units for acts of extraordinary gallantry in action. The Citation consists of a certificate to the unit, signed by the Governor General, and insignia that can be worn by individuals to denote their membership of the unit once their Commanding Officer has been formally invested with the Citation.

The RANHFV flew active service operations with the 135th Assault Helicopter Company of the United States Army during the Vietnam War from 22 October 1967 to 8 June 1971. Over this period slightly less than 200 men in four contingents fought against a committed and resourceful foe in a hostile and difficult environment.  The unit lost five men killed in action, 22 wounded and earned for itself a reputation second to none for consistent gallantry in action.  Their story can be found here.

Over the total period of its Service, the RANHFV comprised four consecutive Flights of 48 personnel.  Each Flight comprised eight pilots, four observers, four aircrewmen and a team of maintenance personnel from each aircraft specialisation – plus essential support personnel of cooks, supply clerks, writers and photographers. All fitted in to the 135th AHC according to specialisation and rank. The HFV personnel were well experienced in their trade and in service life.

The 135th  AHC was new in country as was HFV1 when the integrated unit formed up at Vung Tau in South Vietnam in Sep/Oct of 1967 with 26 troop carrying UH-1H Iroquois and 8 UH-1C gunships. After a short work-up period the 135th began operational flying and very high flying rates were not long in coming. Daily missions in support of Army infantry units comprised 10 troop carriers, 4 gunships, the command and control aircraft and a spare troop carrier and could occur anywhere in the II, III or IV Corps, in and around Saigon and the Delta area. The day began very early and often finished late in the evening.

The high rate of flying demanded high rates of aircraft availability and continuous strong efforts from the maintenance organisation, working all night as well as during the day to maintain the availability rate required. Spares were often a problem. It all meant a well-functioning, high performance, concerted effort from everybody in unison and this was the daily norm.

Flying ten troop carrying aircraft in a formation day-in day-out often into small areas with high vegetation around them tested every pilot’s nerve, fortitude and skill. Each troop landing made the aircraft vulnerable to ground fire with the enemy normally waiting until troops were on the ground until opening fire. Night operations without lights or landing aids added further stress. Monthly flying hours were as high as 170 for some Aircrewmen, 120 – 140 was the norm for all aircrew.

Although some individuals deservedly won decorations for their outstanding performances in the many situations which arose, many did not. This was, in part, because of quotas for medals in the Australian system and because the extraordinary became regarded as ‘ordinary’, “just another day in the Delta” as was the saying! The most glaring shortfall in the system was the lack of an award which recognised the supreme achievements of the whole Unit.

The US awards system provided for a Unit Citation whose purpose was to recognise superior teamwork resulting in excellent operational performance. This provision was ideal for units such as ours, but the Australian system did not have such a provision until 1992.

In appreciating that there was at last an award in the Australian system of honours and awards, a submission to the Valour Inquiry was raised in May of 2011 though the Fleet Air Arm Association of Australia, which argued for consideration of a Meritorious Unit Citation for the HFV.  The Defence Honours and Awards Appeals Tribunal Inquiry was sympathetic to the proposal but advised it was outside its Terms of Reference.  It was to take another six years before the Minister of the day agreed to expand the Terms of Reference to allow the Tribunal to inquire into the award of a Unit Citation for the Flight.  You can read those TORs here.

From mid-2017 a number of written submissions were prepared for the DHAAT, including by RADM Neil Ralph, RADM Mark Campbell, CMDR Max Speedy and CAPT Rob Ray.  The Tribunal also conducted hearings during which it interviewed many former HFV members in support of the proposal.

The Tribunal’s report was released in early May of 2018, and goes into great detail regarding the evidence brought before it and its reasons for its recommendations. You can read it here. Interestingly, it considered the award of a Meritorious Unit Citation, as suggested, would not properly reflect the extraordinary and consistent level of gallantry displayed by the whole of the HFV, and instead recommended the award of the higher Unit Citation for Gallantry.

Whilst there were many examples of exceptional gallantry and bravery throughout the period RANHFV was deployed, the Unit Citation for Gallantry recognises extraordinary gallantry in service of the collective unit over a period of time. Only four UCGs have been approved since their introduction and it is properly regarded as the most prestigious Unit honour that can only be granted, and then only after careful and forensic examination of the circumstances of that Unit’s service.

In making its recommendations the Tribunal noted:

“…that the performance of the RANHFV is a clear example where the unit as a whole, and every member individually, performed so outstandingly through the entire campaign that official recognition of all members of the Unit is warranted.

In this instance, whilst individual awards for gallantry in action were completely justified, given the mutual interdependence specific to the RANHFV, the Tribunal considered it would be inappropriate if all members were not recognised for their extraordinary gallantry.”

Although the effort to achieve this historic milestone can be attributed to many people, Max Speedy’s written submission earned particularly favourable comment by the Tribunal.   It is an interesting document as it provides a compelling snapshot of the achievements of the Flight, and why the service it provided was truly sustained and outstanding.   You can read it here.

The Award’s citation reads as follows:

“For acts of extraordinary gallantry in action in South Vietnam from October 1967 to June 1971.

The Royal Australian Navy Helicopter Flight Vietnam, as part of the Experimental Military Unit of the United States Army 135th Assault Helicopter Company, exhibited exceptional and extraordinary gallantry whilst engaged in offensive operations continuously throughout its four-year deployment. This exceptional gallantry was enabled by the efforts of the entire Royal Australian Navy Helicopter Flight Vietnam.

The Flight was a unique unit and every member, regardless of mustering or category, either performed their duties with demonstrable gallantry or were used in roles for which they were not trained and still performed bravely. The administrative and maintenance staff were required to assist in the provision of base security in addition to their normal duties and almost all of the support personnel regularly volunteered to act as aircrew employed as door-gunners and Crew Chiefs. This was in addition to the extremely long maintenance hours required to support the tempo of operations conducted by the Flight. Over the course of the operations in Vietnam, the Flight accumulated a formidable record of operational flight hours and citations for individual gallantry. This has set it apart from other operational units.

While exposed to hostile fire and at great personal risk, aircrew flew on average 50 per cent more operational hours per month than other Australian aircrew in comparable roles with other units. Aircrew were constantly engaged by the enemy, faced the danger of booby-trapped landing zones and frequently found themselves fired upon by friendly forces. The personnel who flew with the Flight arguably saw the most intense combat of any Royal Australian Navy personnel in the war. Despite the fact that none of the personnel had previous operational service and none had been under fire, they were courageous in battle, exhibited exceptional and extraordinary gallantry and did so with great skill and heroic dedication in executing a mission far removed from those for which they had been trained. Over the period of the Flight’s operations in South Vietnam, five members of the unit died and 22 were wounded in action.

The extraordinary gallantry, dedication to duty and astonishing record of the Royal Australian Navy Helicopter Flight Vietnam conducting tasks far removed from the expectations of Naval service, has forever set it apart from other units. The extraordinary acts of gallantry and heroism consistently displayed by the personnel, combined with their loyal devotion to duty were in keeping with the finest traditions of the Royal Australian Navy and the Australian Defence Force.”

The Fleet Air Arm Association of Australia is delighted to be amongst the first to acknowledge the RANHFV’s UCG, and extends its warmest congratulations to those who made it happen, and to the nearly two hundred men who served with such extraordinary gallantry over the period of the Flight’s tenure.

Time has remembered them as a Unit that performed in the very highest traditions of the Fleet Air Arm, and the award of the Citation now cements that view into history.