Robert Roberts was born on 19 February 1930 at Brisbane, Qld, and enlisted in the Royal Australian Navy (RAN) at Sydney on 7 January 1948, for 12 years. O/N A35689. His father Archibald is listed as next-of-kin. The RAN had recently formed a Fleet Air Arm (FAA) – and was advertising for aircrew and maintainer recruits, offering an attractive career in the navy.

Roberts enrolled as a Naval Airman recruit and was drafted to HMAS Cerberus (FND) on Western Port Bay, south of Melbourne where he began basic training, then rated Acting Naval Airman 2 (probational). During the early developmental stage of the RAN FAA, maintainers were trained at Royal Navy Fleet Air Arm bases in the UK. So, on 21 June 1948, Roberts embarked on MV Kanimbla for passage to the UK, arriving on 5 August 1948, where he was drafted to HMS Daedalus (RNAS Lee-on-Solent) the RN’s primary FAA training base and administrative centre.

After being rated Naval Airman 2 (E), on 1 September 1948, Roberts transferred to the FAA base HMS Gamecock (RNAS Bramcote) to begin his Air Mechanics Training Part 3. This engines (E) training course continued, until 3 May 1949, when he was posted to HMS Vulture (RNAS St Merryn), near Padstow, Cornwall. At HMS Vulture the focus was on practical experience; and it was here that he was promoted to Naval Airman 1 (E) on 23 December 1949. On completion of his training, on 19 January 1950, Roberts took passage back to Australia, arriving at Sydney on 27 March. 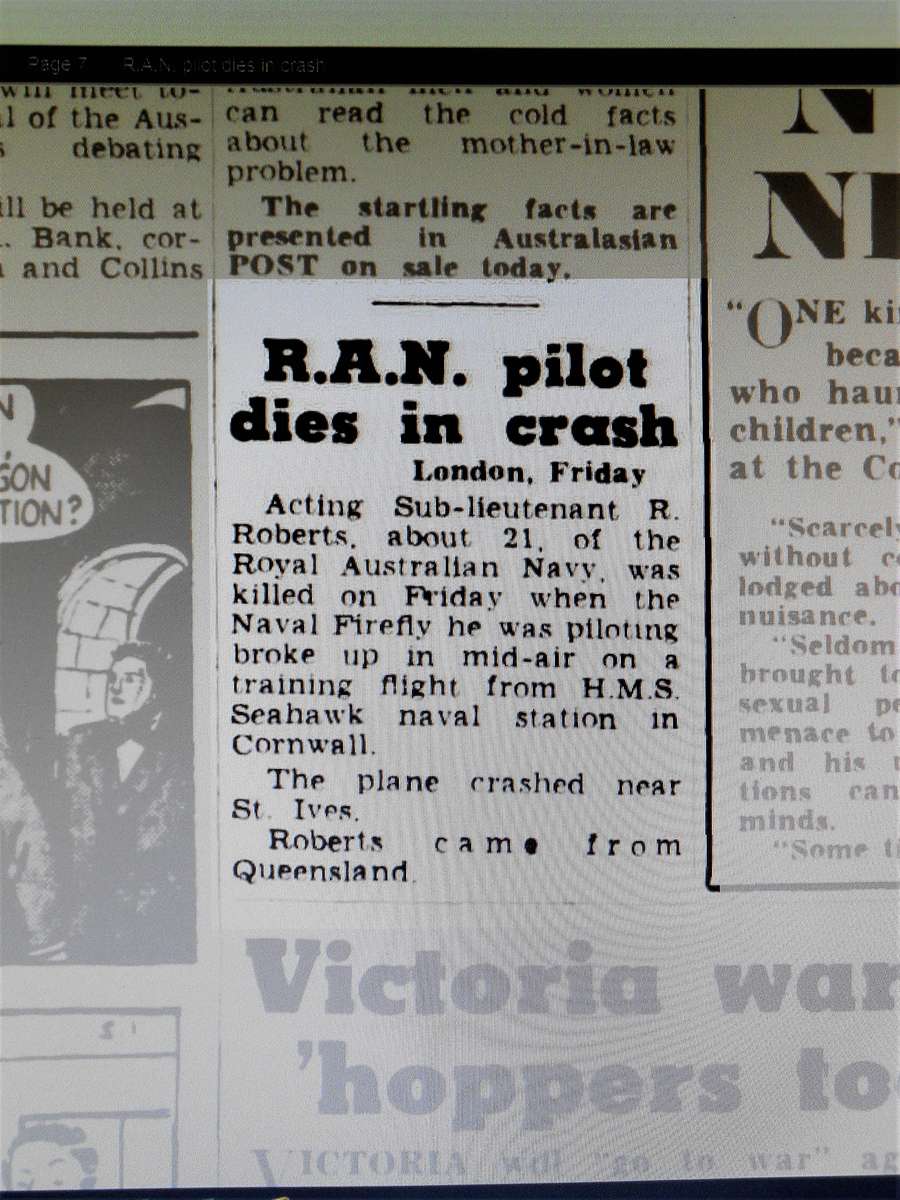 Roberts arrived at HMAS Albatross (RANAS Nowra) on 28 March 1950 where he joined one of the aircraft maintenance teams. As Roberts was interested in promotion he studied for the RAN Higher Education Tests, which qualified him to apply for a transfer to Aircrew. After being accepted for Aircrew, Roberts was drafted to HMAS Cerberus on 9 May 1952, where he began Aircrew Training, with the rank of (probational) Naval Airman Aircrew, and following an assessment he was selected for pilot training.

As an RAN Aircrew Trainee, Roberts transferred to RAAF Point Cook No1 Flight Training School for flying instruction, starting with the Link Trainer, and then moving to the DH82 Tiger Moth. After 14 months of basic flight theory training and practical flying experience with the Tiger Moth and more powerful Wirraway aircraft; early in September 1953 Roberts graduated from Point Cook having gained his ‘wings’. On 15 September Roberts was promoted to Acting Sub-Lieutenant (P) and a week later embarked on RMS Strathmore for the UK to begin advanced training with the RN FAA.

After arriving in the UK Roberts was posted, on 25 October 1953, to HMS Seahawk (RNAS Culdrose), near Heston, Cornwall. At Seahawk he joined the Operational Flying School Course which included developing flying skills, defensive techniques, weapons training, fleet exercises and deck landing on an aircraft carrier. The course was intense, and involved anti-submarine exercises with long-range flights over the ocean in a Fairey Firefly aircraft.

On Friday 20 November 1953, Acting Sub-Lieutenant (P) Robert Roberts RAN was killed while flying a Firefly on an anti-submarine exercise, near St Ives, Cornwall, when his aircraft suffered a structural failure in the air and crashed.