Right: The RAN’s Sea King story doubtless started well before 1970, as Navy ramped up a project team to specify what helicopter they required and how many.  The first tangible signs of the new aircraft didn’t emerge until ’74, however, in Westland’s little plant at Yeovil, Somerset.  Even in those days Westlands was known as a cottage industry, with much of its construction done by hand: each individual rivet drilled and fitted, and each plate and beam carefully placed into the respective template/jig to ensure uniformity.  Notwithstanding the primitive processes, the product was solidly built and the British Sea King derivative was a world-class aircraft. (Image courtesy of Andy Craig).  You can see a sequence of build photos here.

Below left. In the meantime, the first two Australian pilots were sent for Sea King conversion training to 706 Squadron (Royal Navy). They joined No.165 AFT (Advanced Flying Training) course on 06 March 1974, with a collection of RN pilots.

A schematic of the Sea King paint scheme can be seen here.

Above Left. A commemorative photo of the very first flight of an Aussie Sea King at Westlands Yeovil. The caption upon it reads ‘From RAN Sea King Instructional Group’ but unfortunately it is not dated.  Above Right: The first Australian build aircraft visited Culdrose (HMS Seahawk) on 23 October 1974. It actually hadn’t been handed over to the RAN by then, so was flown by Mr Don Farquharson from Westland, with his co-pilot LEUT Keith Engelsman (RAN Test Pilot). It was there for the ASKFUK formation ceremony, held in one of the hangars on the same day (Below). CAPT David Orr addressed the gathered throng, whilst the CO and SP strived to look ceremonial immediately in front of the aircraft.

Below Left.  The Formation Ceremony:  Captain Price RAN, Commanding Officer of the RN Air Station Culdrose, hands over a symbolic picture of a Sea King to Captain David Orr, RAN.  Bell and Craig are still striving in the background!  Below right:  Not just another Sea King picture, but a hugely important one – the first truly Aussie Sea King arrives at Culdrose on 14 November 1974, flown by Keith Englesman and Eddie Bell.  Andy Craig, the Flight’s Senior Pilot, was demoted to the ‘goofing’ jump seat between the two pilots.  The event marked the real start of the Flight’s work to train maintainers on the intricacies of a highly complex aircraft, and aircrew how to fly and, just as importantly, how to fight it.

Left:  POATA Mick Purdy and CPOATA Harley proudly display the cake to mark the formation of the Flight.  Although  most of the Flight’s members had been in country for several weeks, the date marked the formal coming together of the Unit. Below. Ceremony over, it was then time to get on with the training.  Maintainers learned the technical intricacies of the aircraft, which was an order of magnitude more complex than its predecessor, the Wessex.

Below.  Part of the Australians’ Operational Flying Training was deck landing practice.  Here, three RAN Sea Kings land aboard HMS Bulwark in Lyme Bay on 11 February 1975. A big part of OFT was also learning how to use the Sea King in its primary role: for Anti-Submarine Warfare. The rudimentary systems of the Wessex were nothing like the Sea King’s, with its on-board radar and, for its time, complex sonar suite.

Right.  A Sea King drops a Mk.44 torpedo during trials at Porthkerries Range in Falmouth Bay, 13 March 1975. Aside from testing their aircrafts’ weapons systems, the Australian crews learned ASW tactics too, both in terms of day and night detection and tracking of submarines – usually working in pairs – to their persecution using depth charges or, more often, homing torpedoes. Below.  The caption that came with this photo notes the date as 15 November 1974, but that would be incorrect as the first aircraft was only delivered the day before.  There is no doubt that it is a Search and Rescue mission to the civilian freighter ‘Asia Freighter’, however.  Being on Culdrose’s SAR roster was a source of some pride for the Flight, as very few other foreign Navies were afforded that recognition.  It also provided some challenging and rewarding flying for the crews.

When the Australian Sea Kings were purchased from Westland Helicopters they were upgrades of the RN HAS.1, which featured two H.1400 Rolls-Royce Gnome gas turbines developing 1,400 shp each. The engines on the SK50 were uprated H.1400-1 Gnomes which provided 1,535 shp by increasing the N1 (gas generator) speed and using improved turbine blades able to operate at higher temperatures. This resulted in better performance at the higher Density Altitudes experienced around Australia and SE Asia. The tail rotor was also modified from five to six blades to better maintain directional control with the additional power now available from the upgraded power plant. 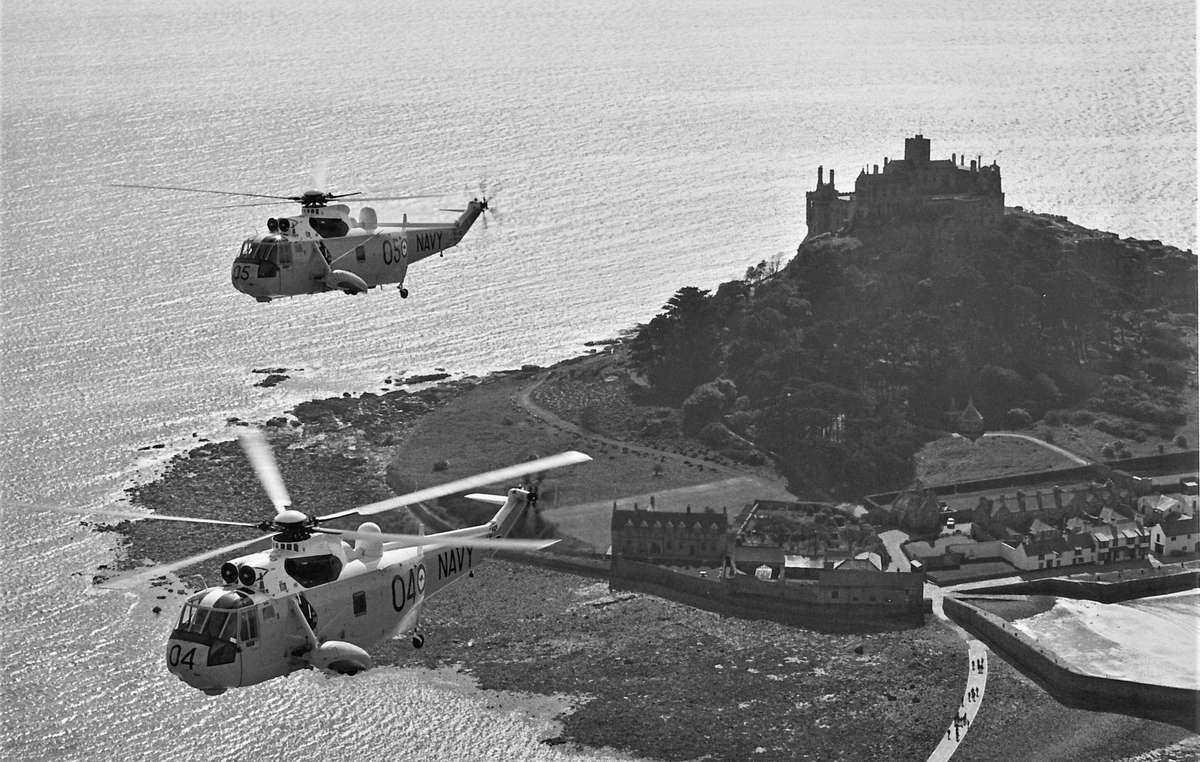 Above. The Australians’ last flight in the UK took place on 18 March 1975, when two Mk.50’s flew along the coast including over St.Michael’s Mount – a picturesque local landmark not far from Culdrose Naval Air Station. The three ASKFUK aircraft were then packaged for transit for Australia aboard commercial ships, together with the remaining 7 production aircraft. 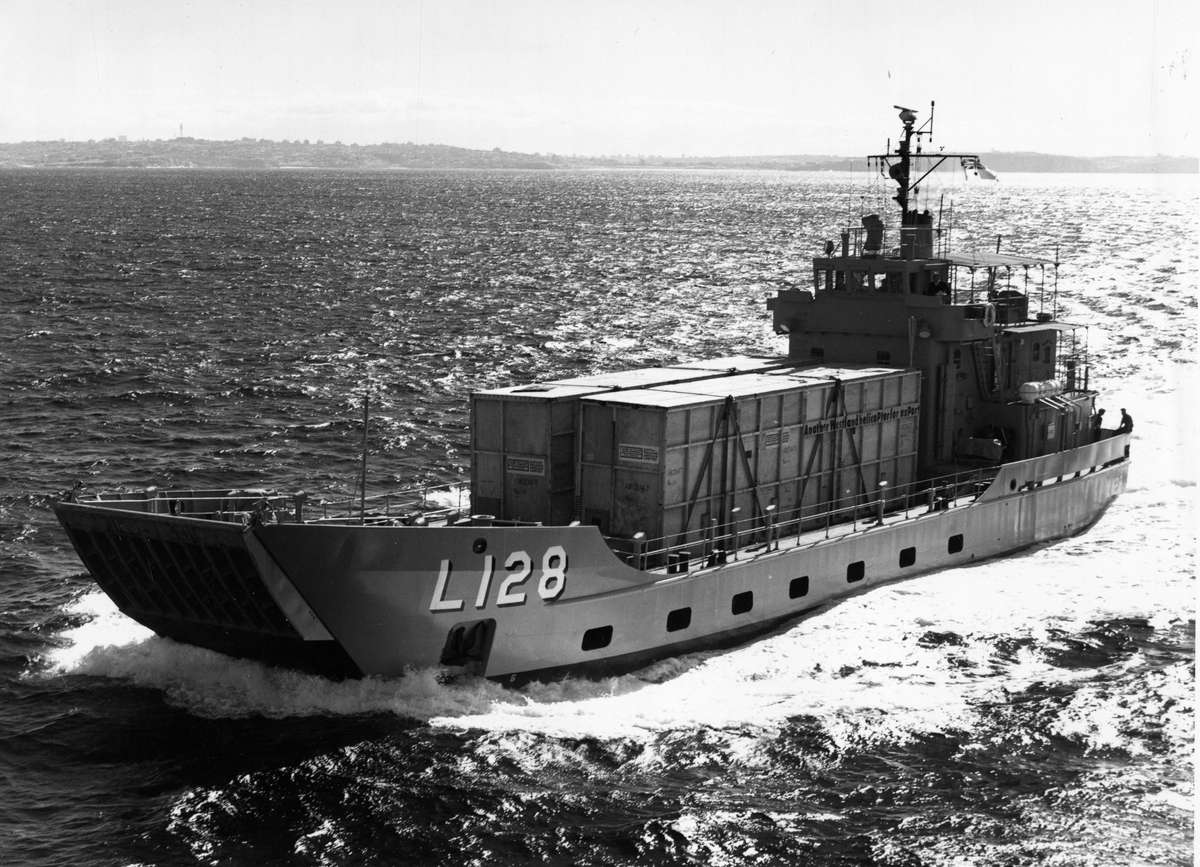 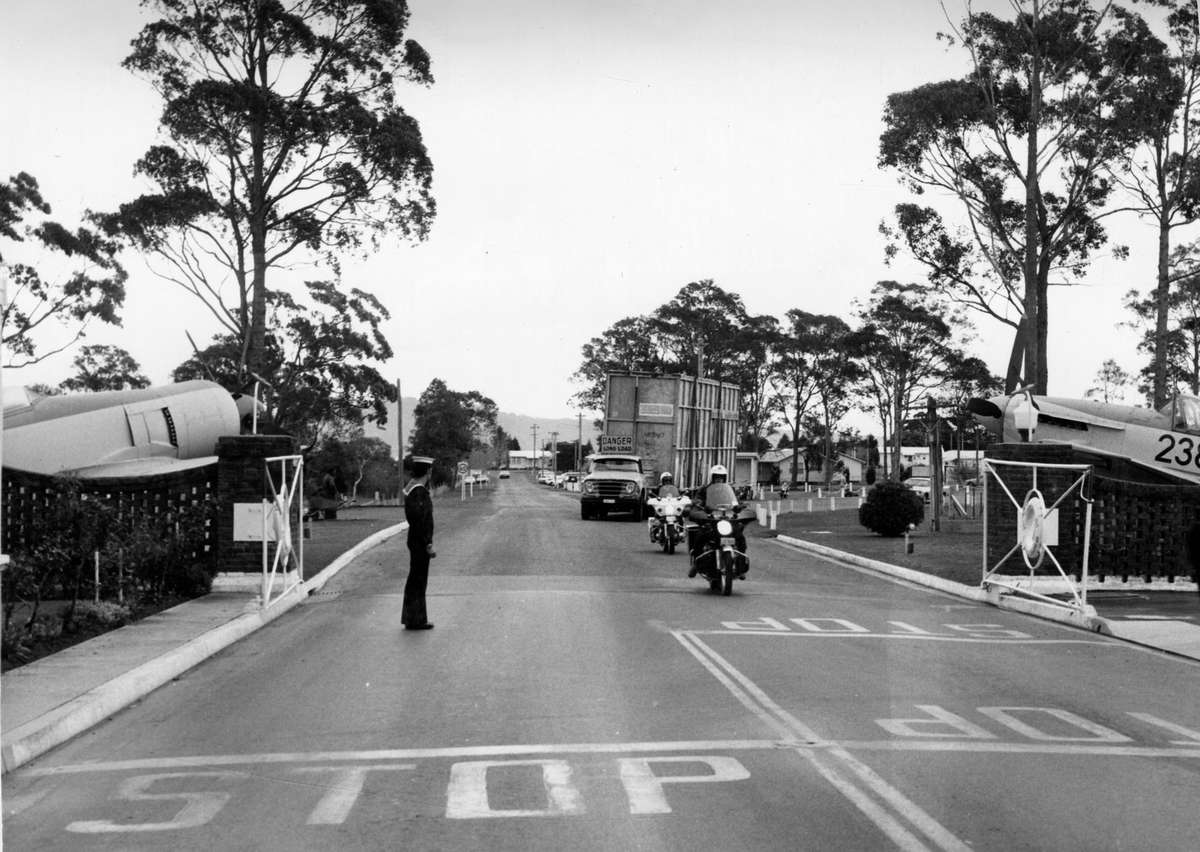 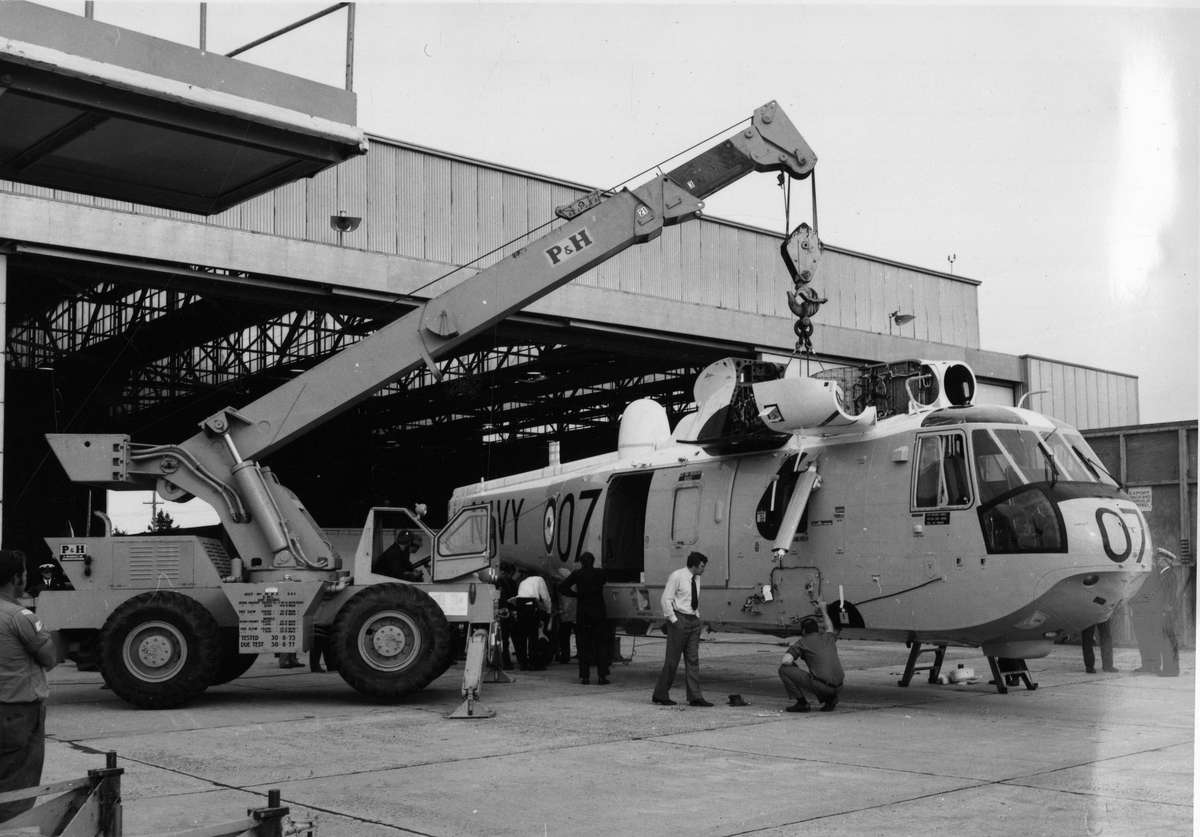 Once in Australia, the boxed Sea Kings were loaded aboard HMAS Labuan for passage to HMAS Creswell in Jervis Bay (above left), where they were craned aboard a waiting flatbed (above centre) to take them the 30-odd kilometres to HMAS Albatross, their new home.  Arrival though the main gate (above right) was an exciting event, as it not only marked the safe arrival of each aircraft from a long journey, but the beginning of a new era of rotary wing operations in the Fleet Air Arm.

Right. By now the UK Sea King Flight personnel were back at Albatross, and wasted no time in assembling each aircraft as it arrived.  Here is one of them outside ‘A’ hangar, which belonged to HS817 Squadron. It was to be their home base for the next 35 years.

Aircraft arrived from the UK at regular intervals, gradually building up the fleet to its full strength. Those who had trained in the UK now became the instructors, teaching both maintenance personnel and aircrew on the intricacies of the aircraft. Below.  A loose formation of four Sea Kings make landfall over Jervis Bay, not far from HMAS Albatross.

Right.  Amongst the training there were other tasks to be done, too.  On 12 June 1976 the Governor-General, Sir John Kerr, paid a visit to the Squadron with his wife to see the Commonwealth’s latest investment in Defence, and to enjoy a short flight.  Here Lady Kerr is being helped from the aircraft…one assumes the helmet was incompatible with her hair style!

Left. Public Relations remained a task, too, when the opportunity presented itself.  On 24 September 1975 three 817 Squadron Sea Kings visited Canberra for a fly-past over the city. One of them then ‘dunked’ her sonar into Lake Burley Griffin, whilst a second carried out a winching demonstration.  Such events were important to keep the Fleet Air Arm in the public awareness, as well as providing a break from the routine of training.  (Image: Canberra Times).

Below.  It wasn’t long before the Navy lost its first Sea King, however, when N16-117 (06) ditched in the Shoalhaven Bight  on 21 Oct 1975.  It was engaged in night winching training over water, which required the Observer to visually report his aircraft’s approach with the rear cabin door open. As he was performing this duty he was doused in hot oil flowing down the starboard side of the aircraft.

The loss of oil was immediately reported to the aircraft’s captain (LCDR Carl Daley) and the cabin door secured. The pilot gained height, but moments later lost all torque indications. NAS Nowra and another aircraft in company were informed and shortly afterwards the aircraft ditched, shearing off the rotor blades before turning over and sinking nose first. The cabin rapidly filled with water and the crew inside was fortunate to escape. They were then recovered by the second Sea King and taken back to NAS Nowra. The aircraft’s loss was investigated and subsequently attributed to a sub-standard gear box design. Three further Sea Kings were to fall victim to similar gearbox failures before a suitable modification could be designed and fitted.

By 2 February 1976 the Squadron was fully equipped with its Sea Kings and a ‘Re-Equipment Ceremony’ was held on that date.  You can see the program for this event here.  The Squadron’s Wessex 31Bs took on a secondary role of utility, plane guard and SAR before transferring to HC723 Squadron, leaving 817 as a pure Sea King unit.  The Wessex continued to serve the Navy for a further 13 years.  Meanwhile, HMAS Melbourne was conspicuous by her absence: she was in extended refit when the Sea Kings arrived and did not emerge  until April of 1976, when the first Sea King landed aboard to conduct trails and flight-deck crew training. She eventually embarked the Squadron for the first time  in July of that year.  Four months later a second Sea King was lost (below), also due to loss of oil to the Main Rotor Gearbox. Despite valiant attempts she eventually rolled over and sank.

Left.  In April of 1976 another project milestone was achieved with the delivery and installation of the Sea King Simulator.  This was a first for the RAN, and provided the opportunity not only to bolster the training of pilots in the full three-axis cockpit console, but to link both front and rear seat modules to provide a full ASW crew-training facility.  Much of the manufacturing input was provided by Australian industry.  You can read a bit about its genesis here.

Below:  HS817 Squadron embarked its Sea Kings whenever Melbourne was at sea. By then she was an old ship, and required increasingly long periods of heavy maintenance.  In fact, she was only at sea for a total of 4.5 years during the Sea Kings’ time.  The Sea Kings integrated well, although 23 May 1979 saw the loss of the fourth aircraft, when N16-098 had a catastrophic tail rotor drive shaft failure as she came to the hover alongside the ship.  The photo (below left) shows the aircraft just after it rolled over. You can see a brief YouTube video of the event here, and read the Copilot’s account here.  (Click on images to enlarge).

In November 1981 HMAS Melbourne was in Sydney for an extended refit – the third in three years. The ship was deemed too old and expensive to maintain, however, and the refit was cancelled pending a decision to acquire a replacement carrier. In the event, that never happened: Melbourne was decommissioned and, after languishing in Sydney harbour for a couple of years, was finally towed to a Chinese breaker’s yard. The decision to scrap the carrier capability had very significant impact on the Fleet Air Arm, as the fixed wing element was disbanded, making it a rotary-only force – and one which now had to rely on small flight decks to earn its living. The Sea King was about to enter a new phase of its operational history.

Right:  The new aircraft were not without other problems either, as recounted on this HS817 Squadron Line Book page from 1978, telling the sad story of major cracking around the transmission mounts.  This required a major modification to strengthen the affected area, severely affecting the availability of aircraft on the Squadron.