Back to Seasprite Article

WANTED!  We need your photographs of the Seasprite, particularly if you have any of the original airframes at Davis Monthan AFB, refurbishment in the States, or delivery to Oz. We are also interested in photos of Flight Testing, deck operations etc., but all others are welcome too.   Simply send the webmaster a message using the ‘Contact Us’ form below to advise what you have, and he’ll get back to you. 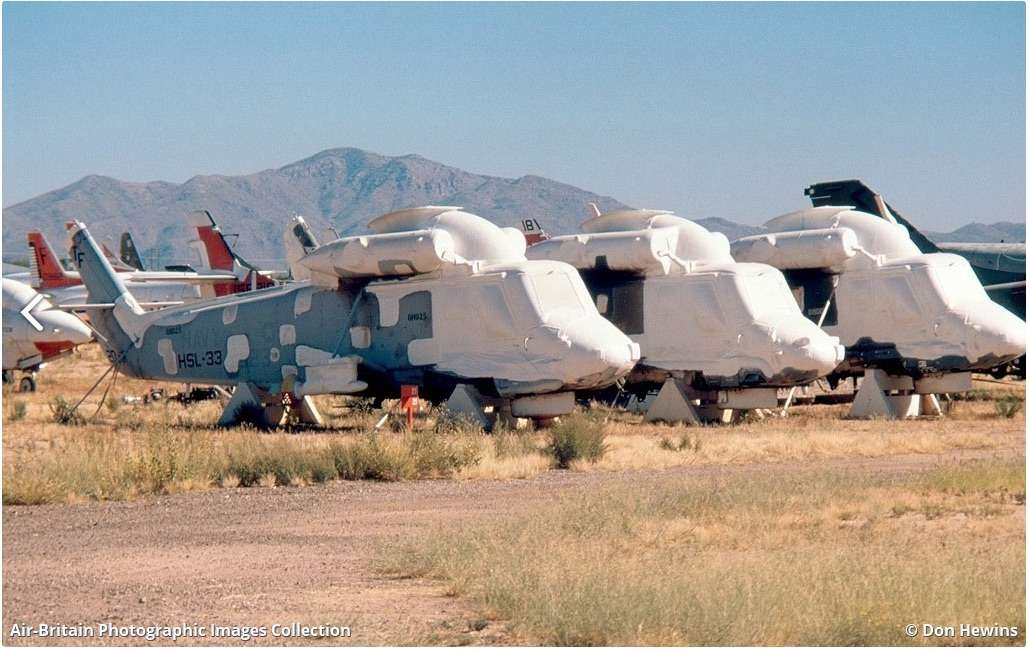 Kaman was competing with the British company Westland, who was offering the Super Lynx.  The small number of interested companies stemmed from the requirement for a medium helicopter, rather than a larger one. This in turn was a product of Defence’s intent to use the same aircraft for both the Anzac class frigates, which were then coming into the fleet, and the conceptual Offshore Patrol Combatant which was the subject of a separate acquisition Project. Two other companies – Eurocopter for the AS365 Dauphin/Panther and Sikorsky for a marinised version of its S76 had dropped out from the race.

The OPC was mooted as a joint project with Malaysia, which was looking for 27 such vessels against Australia’s nine.  It was too small to carry the Sikorsky S70B Seahawk, so it shaped the requirement for a smaller aircraft.  In the event the Malaysians withdrew from the proposal just a month after Defence signed the Seasprite contract.

Above: Regrettably we don’t have any photographs of the specific RAN SH2F airframes in the Arizona desert, but this photo by Don Hewins of a sister ship, 149023, gives a good idea of what ours would have looked like. (Photo courtesy of Air Britain). Left. The Canberra Times reporting that Kaman had opened an office in Canberra to facilitate its bid for the Anzac Helicopter. (Trove).  The company ramped up its bid with a series of advertisements in Defence-oriented publications such as the one below.

In February 1998 the first of two contracts was signed with Kongberg, the Norwegian manufacturer of the Penguin air-to-surface missile (right). With a 125kg warhead and greater than 34km range it was a potent anti-ship strike weapon.  The following month the government also committed to a FLIR/Infra-red contract.

Left:  A vessel similar to that proposed under the OPC project:  around 80 metres and 1350 tonnes displacement.  Even though the new helicopter size had been largely dictated by the specifications to this vessel,  the contract with Kaman was signed before its future was assured.  In the event, Australia entered into a deal for 11 helicopters in June of 1997.  Four months later the OPC join-venture partnership with Malaysia collapsed when that government bought German boats instead.  Despite the OPC setback, the Australian Government decided to remain with the Seasprite, as it was still regarded as a cheaper option than cancellation of the contract in favour of more Seahawks.

Above. By mid 2000 the first of the Australian Seasprites had been refurbished and was being flight tested. On 17/18 July 2000 the then Chief of Navy, VADM David Shackleton, visited the Kaman plant in Bloomingfield to be briefed on the project’s progress. Clockwise from top left:  An SH-2G(A) being assembled on the plant floor; VADM Shackleton in the cockpit of a Seasprite on the line.  LEUT Ian Menzies, the Flag Lieutenant, is in the foreground; CDRE Jack McCaffrie inspects the transmission platform of a third aircraft, yet to be completed.  (All photographs Jack McCaffrie).  Click on any image to enlarge.

Below: The first Seasprite airframe was delivered by a USAF C-17 transport in time to make its debut at the Australian International Airshow in 2001 – but it lacked any functional Integrated Tactical Avionics System (ITAS) as Litton, the principal sub-contractor, had run into problems developing one.

Below:  805 Squadron, which had always been for fixed wing aircraft, was commissioned for the fourth time on 28 February 2001 under the Command of CMDR Anthony Dalton in preparation for the new helicopter.  The first Seasprite was displayed, complete with the low-vis chequerboard and knight symbol of the Squadron.  The guest of honour was Lady Nancy Bird-Walton, an aviation pioneer who in 1934 became the first Australian woman to earn a commercial pilot’s licence at the age of 19.   Eight former Commanding Officers of the Squadron attended the ceremony.  (Slipstream Magazine Apr04). (Click on images to enlarge). 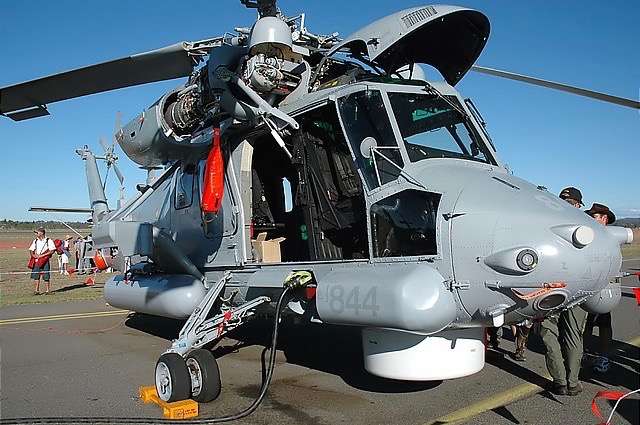 PROVISIONAL ACCEPTANCE
Below: In late 2002 the Chief of Navy,  VADM Chris Ritchie, refused Provisional acceptance of the aircraft as there were still significant shortcomings, but that decision was reversed the following year by the Minister of the Day, Robert Hill,  who announced that Defence would accept it in an ‘Interim Training Helicopter Configuration’ – ostensibly to allow aircrew training to progress.  One of the conditions of this configuration was that it could only be flown by qualified Flight Test personnel, however. which effectively negated training value for any other aircrew.

In the meantime, other airframes were arriving. No. 3 production aircraft arrived in Sydney harbour via the merchant ship “Talabot” on 10 January 2002, and was unloaded at midnight and flown to Nowra later that morning by Kaman pilot John McDonagle and SMA pilot, Mark Henschke. Also on the same vessel was No. 7 aircraft, which was only partly assembled and cocooned. It was transported by road to Albatross on 15 January for assembly by Kaman’s sub-contractor on the ground, Safe-Air Limited.  Four other aircraft were reportedly also with Safe-Air at the time.  Above: L-R. Neil Kelly, Keith Boot, Andy Rowe, John McGonagle, Jason Smith and Mark Henschke (ex-RAN test pilot).  Photo courtesy of Kaman Aerospace.

Above: VADM Chris Ritchie at the provisional acceptance of the Seasprite in October 2003.  Below: The Display aircraft front view. Note the Penguin missiles.  (RAN images).

Few regular Navy/FAAA publications of the time contained much Seasprite coverage, and Slipstream was no exception.  The poor quality image on the left appeared in the June 2003 version with a brief note to say that severe cracking had been detected on one of the aircraft.  No other reference to cracking has been found, however, so we can’t throw any further light on it at this time.   Interestingly,  when Kaman refurbished the original SH2F airframes they had to do far more work than first anticipated. Reliable reports suggest that only about 30% of the original structure remained, mostly in the tail section – although the extensive work on the nose bay of the aircraft to the left suggests the cracking may have been there.

Below.  With the aircraft provisionally released – albeit with restrictions upon it – more of them were allocated to 805 Squadron.  The photo below doubtless took pride of place somewhere in the Squadron building as it showed the aircraft types with which 805 had been equipped over the years:  the Hawker Sea Fury on the right,  De Havilland Sea Venom behind, the McDonnell-Douglas Skyhawk left and – at last – the Kaman SH2G(A) Seasprite. By then the old control tower had been demolished too – the new one can be seen in the background.  (RAN image)

Left: Seasprite 840 during First of Class Flight Trials (FOCFT) aboard HMAS Parramatta in May of 2004. FOCFT plays a very significant role in the introduction of a new helicopter type into service and involves the assessment of the ship, aircraft and equipment interfaces.  A successful Trial results in certification of the vessel to operate that type of aircraft, and a specific Ship Helicopter Operating Limit (SHOL) within which the aircraft is cleared to fly to the ship for any given weight, relative wind and/or deck parameter (RAN image).

Were you involved in the Seasprite era at all?  Perhaps on 805 Squadron, or as Flight Test Aircrew, or in Project Sea 1411?   If so we would love to hear from you with your story. What was the Seasprite like to fly/maintain?  What were the highs and lows of your time? What was the mood?   Please help by using the ‘Contact Us’ form at the foot of the page.

Right. In September 2004 the then Commanding Officer of 805 Squadron put an update into ‘Slipstream’ magazine, setting out the problems experienced thus far and the proposed way ahead. By then the FOCFT were complete and the Squadron was validating processes and publications.  Interestingly, he also reported that non-Flight Test aircrew (i.e. instructors) had started training on the Seasprite.  (Slipstream Sep04. Click image to enlarge).  Below. Pictures of Seasprites. (RAN images).

Above: An 805 SQN Seasprite during transit to Sydney for a Fly Past for the departing Maritime Commander Australia.  No date was captioned, but it could either have been in June of 2004 (for RADM Raydon Gates), or in July 2005 (for RADM Rowan Moffit).  Sydney CBD is in the background.

Left:  One of the last photographs available to us of Seasprites in Service.  The FOCFT was undertaken in early 2004 and an Australian Military Type Certification was issued later that year.   Some progress was made in ITAS integration too, although it was slow.  By late 2005 nine had been delivered – but in May 2006 they were grounded for problems with the Automatic Flight Control System, which was subject to ‘hard-overs’ that, in the view of Australia, represented a significant and unacceptable threat to the safety of the aircraft.

The fleet languished in a hangar for a year with significant doubts as to its ongoing viability, but in May of 2007 the Liberal Government announced it was committed to the project.  It was a short lived reprieve:  the Rudd Labour Government was elected at the end of that year and one of its first actions  was to call for a full review.  With the seeds of the Global Financial Crisis approaching there was little confidence that the troubled project could be saved without ongoing risk and expense.  In March of 2008 it was cancelled.

Above:  It remained only to tidy up what was left, and recover what pennies were still to be had.  Local company Integra Packaging was contracted to shrink-wrap ten airframes and transport them by truck to Port Kembla, where they were embarked for the States.  Below: Their final journey from the Naval Air Station. It was an ignominious end for a project that had promised so much.

Below. The unwanted Seasprite SH2G(A) airframes in Kaman’s facility in Bloomfield, CT. What can’t be seen is the “For Sale” sign.  (Kaman image).

805 Squadron was decommissioned on 26 June 2008.  The Navy News article on the left put a positive spin on the situation, but in truth it must have been a frustrating seven-year roller coaster of highs and lows.  Below:  The White Ensign is lowered on the Squadron, prior to being folded and handed to the Commanding Officer,  LCDR Matt Royals.

By 2009 it was done and dusted, as far as Australia was concerned.  The Seasprite was little more than a memory – largely erased from the corporate record.  Kaman, however, was wooing anyone who would buy the returned airframes and the New Zealand government was knocking on the door, looking to replace its ageing SH2F models.  The ex-Australian ‘G’s (although by then they were designated ‘I’s) were available with an extensive range of sensors, fitted for Penguin missiles, and at a bargain-basement price.  The deal was struck and by 2015 the Kiwis were enjoying the new aircraft, as depicted in the photos below.   They even had a postage stamp in honour of the aircraft! 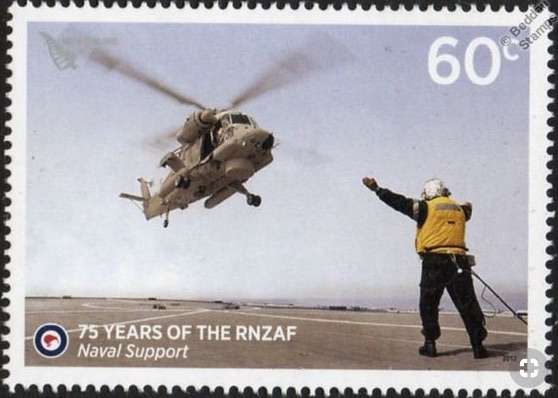 Above, Left & Right.  Two unusual shots of Kiwi Seasprites in Flight, notable by the different colour scheme, the dummy Maverick on the rail and the lack of a Beacon Aerofoil Unit.  (Advice Brendon Blank).

Below. The last remaining fragment of a Seasprite on Australian soil, this hulk was pictured at the NAS Nowra fireground in 2007. It was most likely Bu 151316 which had been bought as a training aid – the oldest of the SH2F airframes, having been shot down in Tonkin in 1968 and rebuilt to provide service until its USN retirement in mid 1993.  Today there is no sign of it – the RAN seems to have effectively erased the Seasprite from its corporate memory, as it tends to do with any unpalatable memories. 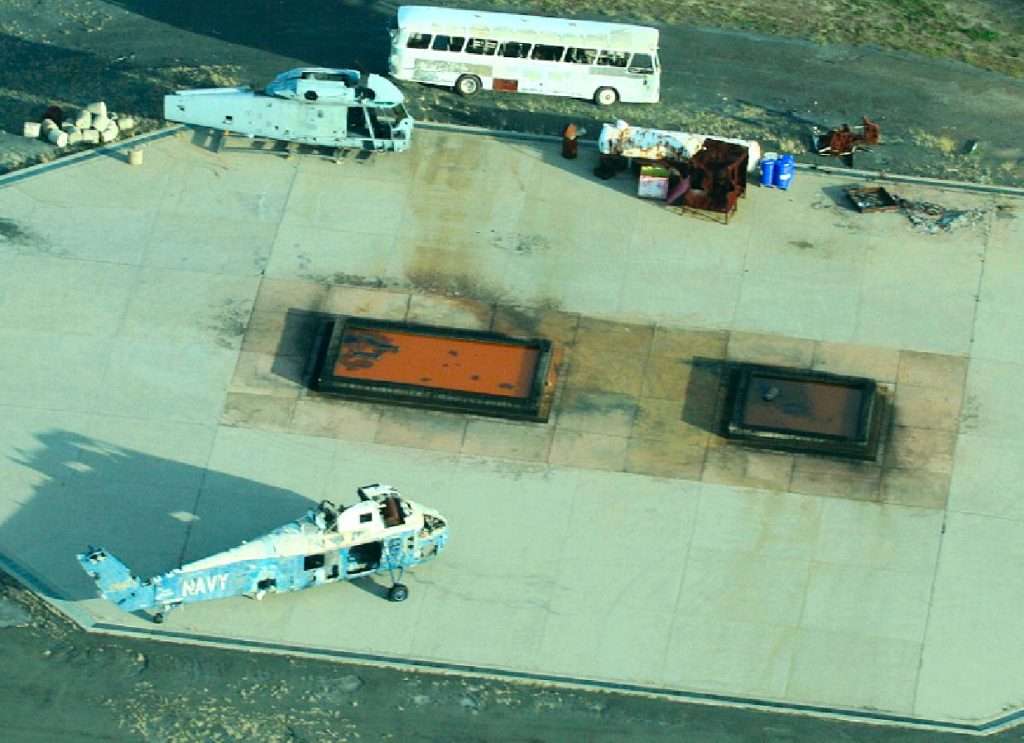 Back to Seasprite Main Article

OTHER SNIPPETS OF HISTORY