Prior to 1925, the RAN’s first faltering steps in organic air support had been limited to cruisers operating borrowed aircraft on short cruises, but HMAS Albatross (1) changed all that.

Although not a ‘flat top’ she was nevertheless the RAN’s first dedicated aircraft carrier, and she had a long and distinguished career in both peace and war.

Kim Dunstan recounts the history of this remarkable vessel.

In the early 1920s the Australian Government called for a review of its defence planning. The rise of militarism in Japan with its large navy (the third largest after Britain and America) was of concern. The end of the Anglo-Japanese Alliance in 1921, which was further complicated by the 1922 Washington Treaty giving Japan a naval numerical advantage, inflamed this situation – as did tensions over Australia’s ‘White Australia’ policy. All of these factors raised questions about Australia’s defence preparedness.

Following the 1923 Imperial Conference it came as a shock when the British government suspended work on the Singapore naval base in 1924. The major concern for Australia was the deteriorating security situation in East Asia, with endless turmoil in China and Japanese territorial expansion. Despite British assurances, Australia decided to take greater responsibility for its defence. In the event it was a timely decision – Mussolini and Hitler were on the assent and Bolsheviks were in charge of Russia. Furthermore, in 1919 Admiral Lord Jellicoe RN reported that a clash with Japan was inevitable.

In view of this, and guided by Admiralty advice, the Australian government ordered two heavy cruisers, both capable of carrying a seaplane. Then, in June 1925, it was announced that a seaplane carrier, HMAS Albatross, would be built at Cockatoo Dock in Sydney; partly to generate work for the dock, but also in response to the RAN’s long-standing wish to have such a vessel, leading to the purchase of the Supermarine Seagull 111 and Seagull V amphibians.

In 1920 the government had decreed the newly formed Australian Air Force (RAAF in 1921) would take responsibility for air defence. This put an end to visions of the RAN forming a Naval Air Arm and establishing naval air bases at major centres and in the islands to the north. This was consistent with the British Admiralty’s earlier warning that naval air shore bases were of limited use, costly at a time of financial restraint, and would detract from fleet efficiency. The British recommended a seaplane carrier as a priority, and HMAS Albatross’s mobility and seaplanes offered the necessary compromise. 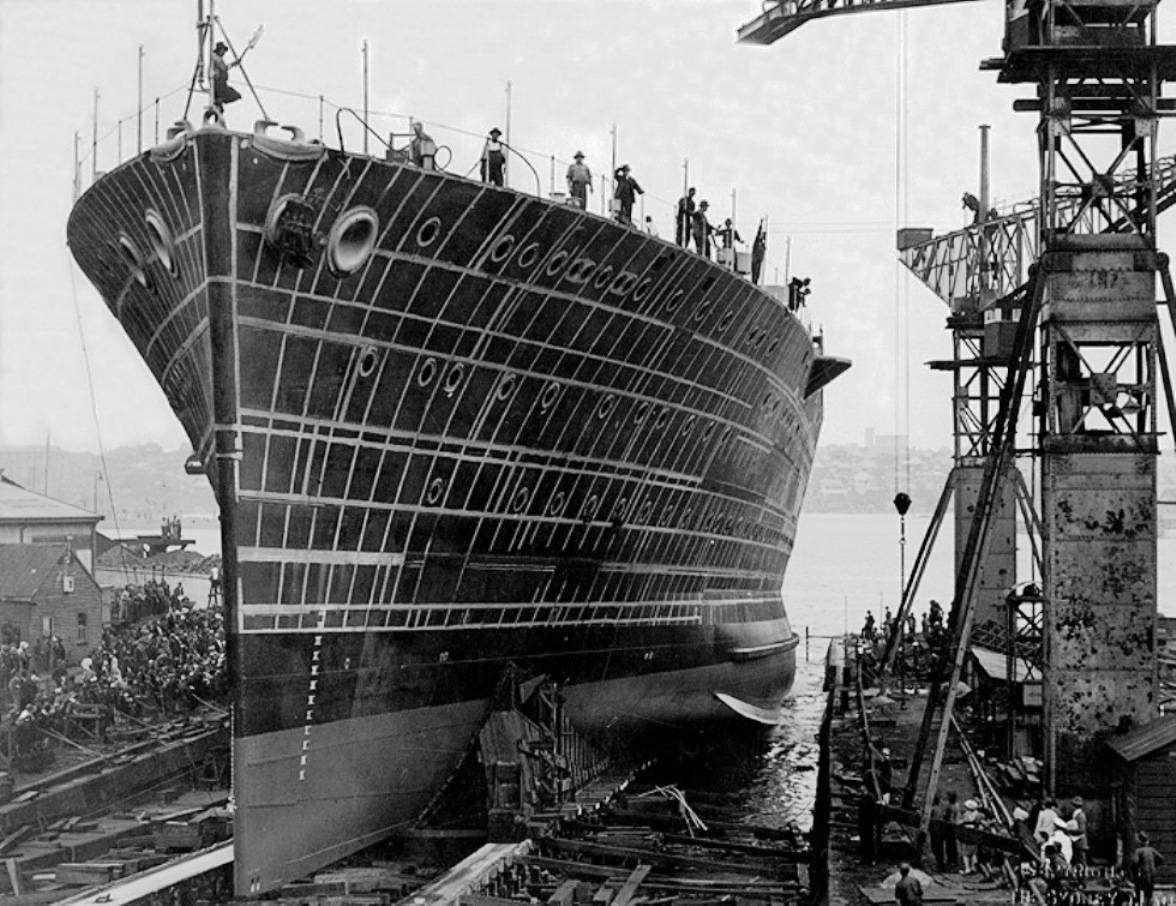 Albatross on the slips at the Cockatoo Dockyard, Sydney, shortly before her launch on 23 Feb 1928. (Photo: AMM Samuel Hood Collection). The Australian Commonwealth Naval board had requested that the British Admiralty supply a design for the vessel, with the conditions that it have a top speed of at least 20 knots and cost under £400,000.

The arrangement was that the RAAF special Fleet Cooperation Flight No 101 would operate and maintain the aircraft, supplying pilots and maintainers. In 1923 the RAN began sending navigators to RAAF Point Cook to train as aircrew observers, together with general service ratings as telegraphist/gunners. Several officers were also selected for pilot training. This system began with the Fairey 111D seaplanes (surveying the GBR with HMAS Geranium), and continued with the Seagull and Walrus amphibians, operated by the Fleet Cooperation Flight until 1944. (Although there were further attempts to establish a naval air service, it was not until 1947 that a dedicated RAN Fleet Air Arm was established).

The seaplane carrier HMAS Albatross was constructed by Cockatoo Docks, based on a British Admiralty design. It was a unique ‘one off’ as seaplane carriers in the Royal Navy were invariably converted merchant ships, whereas Albatross was designed as one from the keel up. It was laid down on 16 April 1926 and launched by the Governor-General’s wife Lady Stonehaven on 23 February 1928. Having completed sea trials by 21 December of that year, HMAS Albatross was commissioned on 23 January 1929. At the time it was the largest warship built in Australia, with a standard displacement of 4,800 tons (4354.5 tonnes); a length of 443 ft. 7 in. (135.02 m); a Beam of 58 ft. (18.3 m), Draught of 16 ft. 11.5 in. (5.2 m) and a speed of 20 knots. Armament comprised four 4.7 inch guns, two 2-pounder pom-poms, four 3-pounders and 24 machine guns. The ship had space for nine seaplanes but only carried six, and three cranes to hoist aircraft to and from the water. As the Seagull 111 could only operate in calm waters with the ship stopped, it placed limits on their use. By 1936 an E111H catapult was fitted on the foredeck.

Despite Albatross’s ungainly appearance with the its high foredeck and hangar spaces, it was a sturdy ship with good sea-going qualities. Early in 1929 it visited Tasmania and Victoria, where at Port Phillip Bay six Seagull 111 amphibians of No 101 Fleet Cooperation Flight were hoisted aboard. They were soon involved in reconnaissance, gunnery and torpedo spotting, W/T, navigation and photographic exercises. These exercises were of great value to the RAN and RAAF. In July 1929 Albatross carried the Governor-General Lord and Lady Stoneham on a tour of Papua New Guinea. Over the next four years Albatross completed a series of cruises to the Mandate Islands, northern Australian and the southern states.

In 1932, due to budget pressures, Albatross was laid up in Sydney Harbour, with the remaining Seagulls transferred to HMAS Canberra and Australia. In 1933 with the full impact of the economic depression, Albatross was paid off into reserve, but continued to operate as a base for seaplanes visiting Sydney Harbour. In 1935 work began to return Albatross to operational service, including the fitting of a rotary catapult. By then the Seagull 111s were replaced with the new Seagull V amphibians, one of which was used to test Albatross’s new catapult. But again she was placed in reserve until January 1938, when a transfer to the RN was agreed.

Although the Seagull 111s were handicapped with performance limitations and need to operate from calm waters, they also suffered damage from the elements, seawater and water-logging. Nevertheless much operational experience was gained, including aircraft handling aboard Albatross, with a number of firsts for the RAAF and RAN. Considering the Seagull 111 was never designed for the tough seaplane work it was doing, it’s no surprise their wooden hulls and airframes suffered damage despite careful servicing. Yet the Seagull 111s served the RAN well: for example, they assisted in HMAS Moresby’s survey of the Great Barrier Reef in1926-27, then embarked on HMAS Albatross, and later trialled on HMAS Australia and Canberra. The RAAF benefitted too. 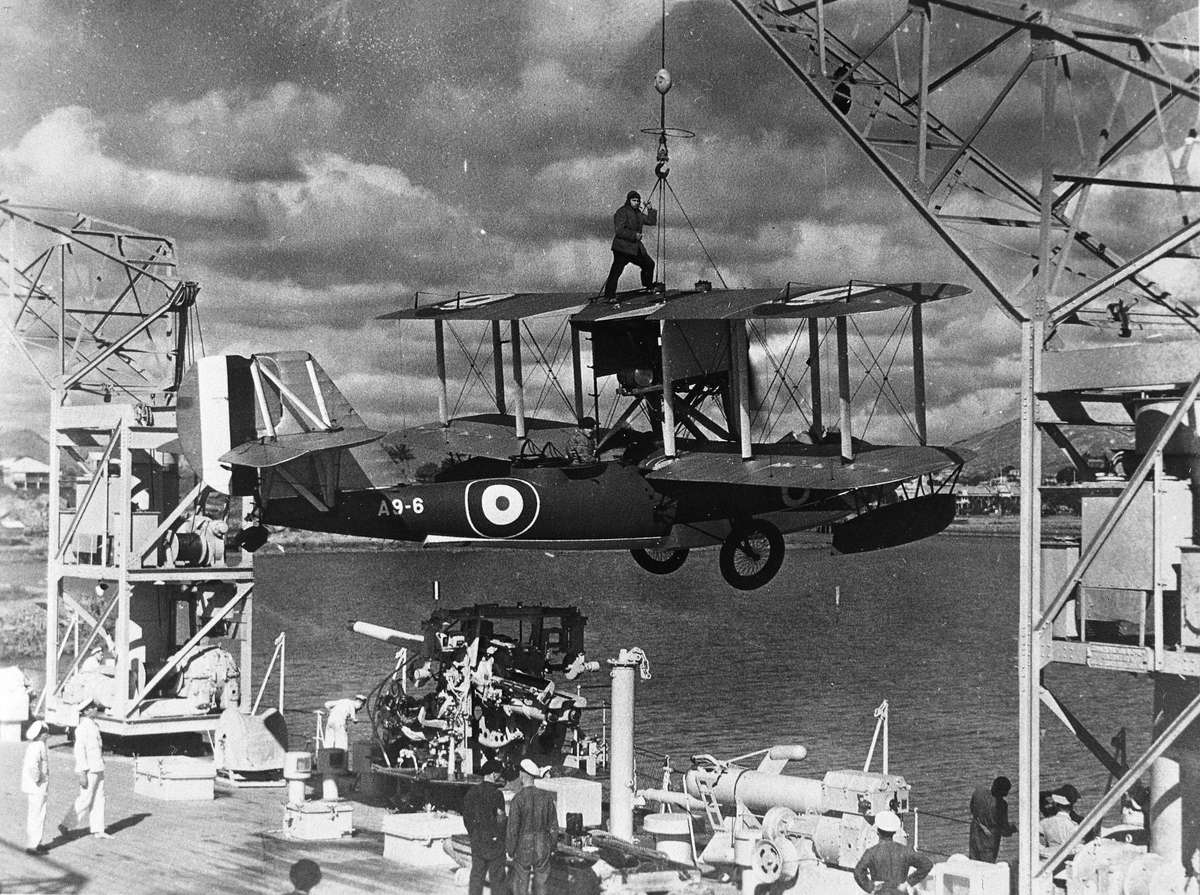 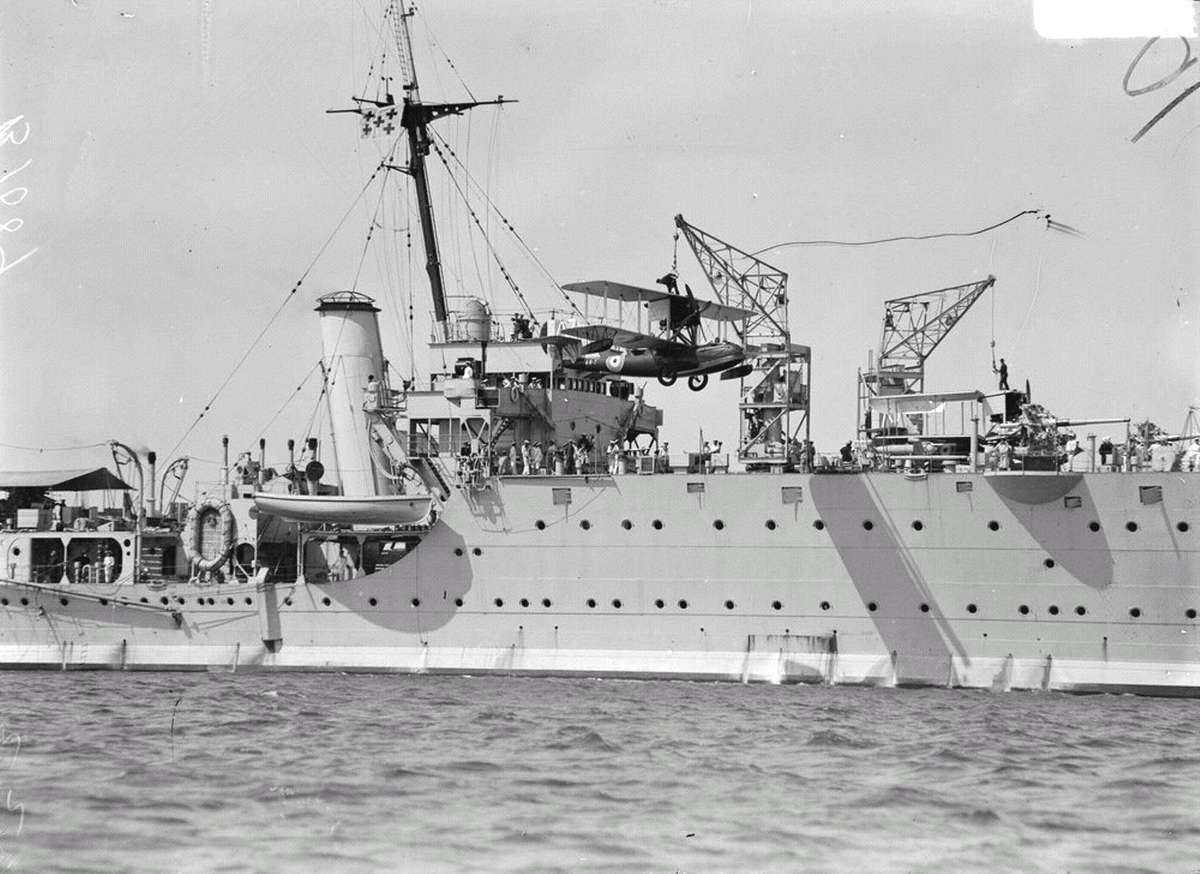 Left: This Seagull III hoisted from the deck of HMAS Albatross with its propeller turning will be lowered onto the water soon. Right: The Seagull IIIs needed calm water to operate from.

The construction of HMAS Albatross was a bold move by the Australian government and being the RAN’s first aircraft carrier it represented a significant milestone. In 1938 HMAS Albatross was paid off and transferred to the Royal Navy as part-payment for the cruiser HMAS Hobart (ex-HMS Apollo). On 11 July 1938, as she departed Sydney Harbour for Britain, a flight of the new Seagull Vs from RAAF Richmond farewelled her. On 6 October 1939 HMS Albatross was commissioned into the Royal Navy. After embarking six Supermarine Walrus amphibian aircraft from RN FAA 710 Squadron, she sailed for war service in the South Atlantic, West Africa and Madagascar.

Working from Freetown, Sierra Leone, HMS Albatross did air reconnaissance for trade defence and anti-submarine patrols, including time at Simonstown for repairs. In 1941 she was sent to the USA for a lengthy refit at Mobile, Alabama, remaining there until 1942 before returning to Freetown and operations in the Indian Ocean, with another refit in Bombay. After her 1943 return to Devonport in Britain she was paid off, converted to a repair ship and recommissioned.

In June 1944 HMS Albatross served at the Normandy landings during Operation Neptune as a landing-craft repair ship, providing engineering assisting to numerous vessels as well as AA defence and naval gunfire against shore batteries. During this operation she was hit once, killing a crew member. In August she was struck by a long-range German ‘Marder’ torpedo, with 66 crew lost. Towed to Portsmouth for repairs, she was then used as a depot ship for minesweepers. Sold in 1946 Albatross initially became Pride of Torquay and later Hellenic Prince transporting displaced persons to Australia. She was finally scrapped in Hong Kong in 1954 after some 26 years of service. 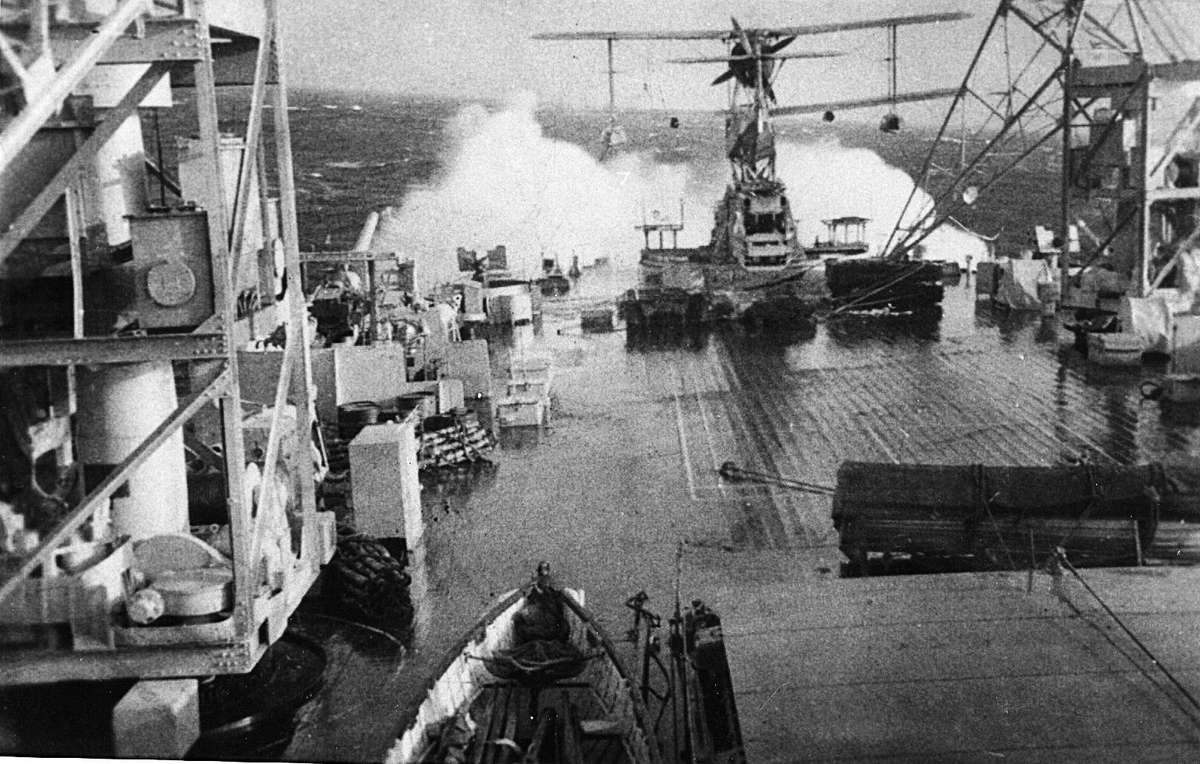 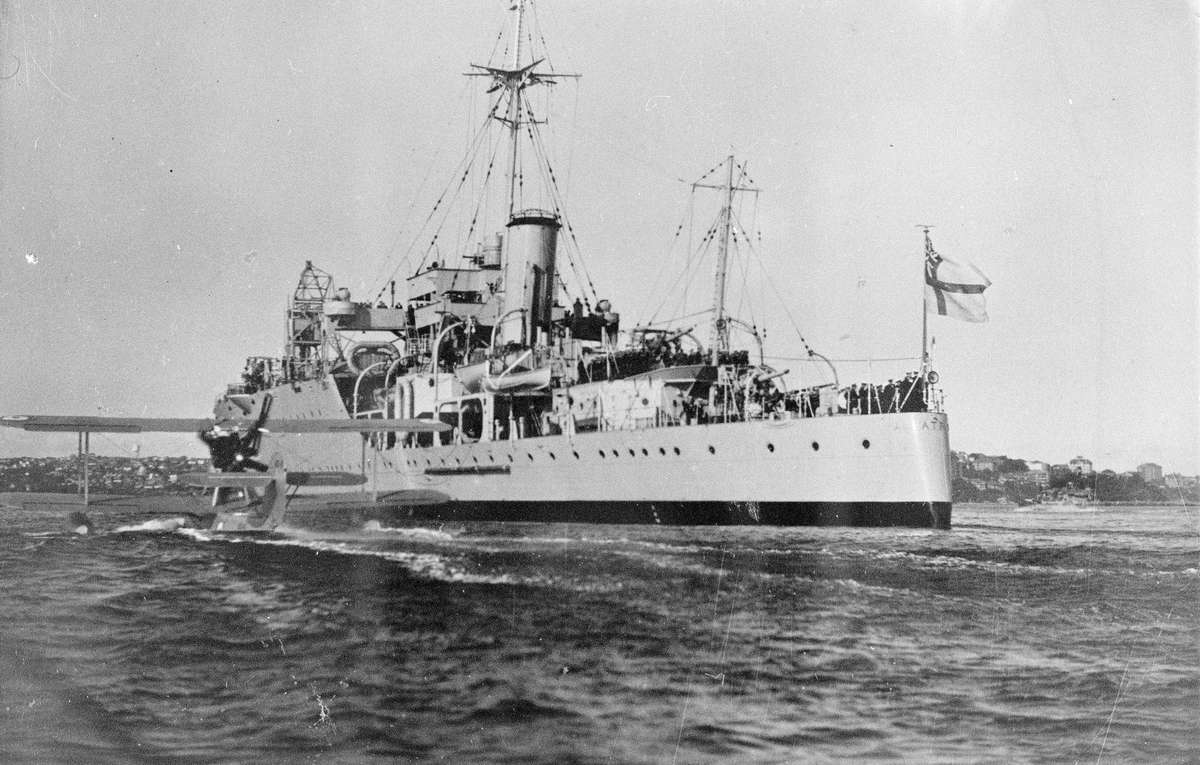 Above: Albatross in Sydney harbour with a Seagull V taxiing beside her (RAN Heritage). Right: A Seagull III being hoisted aboard Albatross (RAN image). 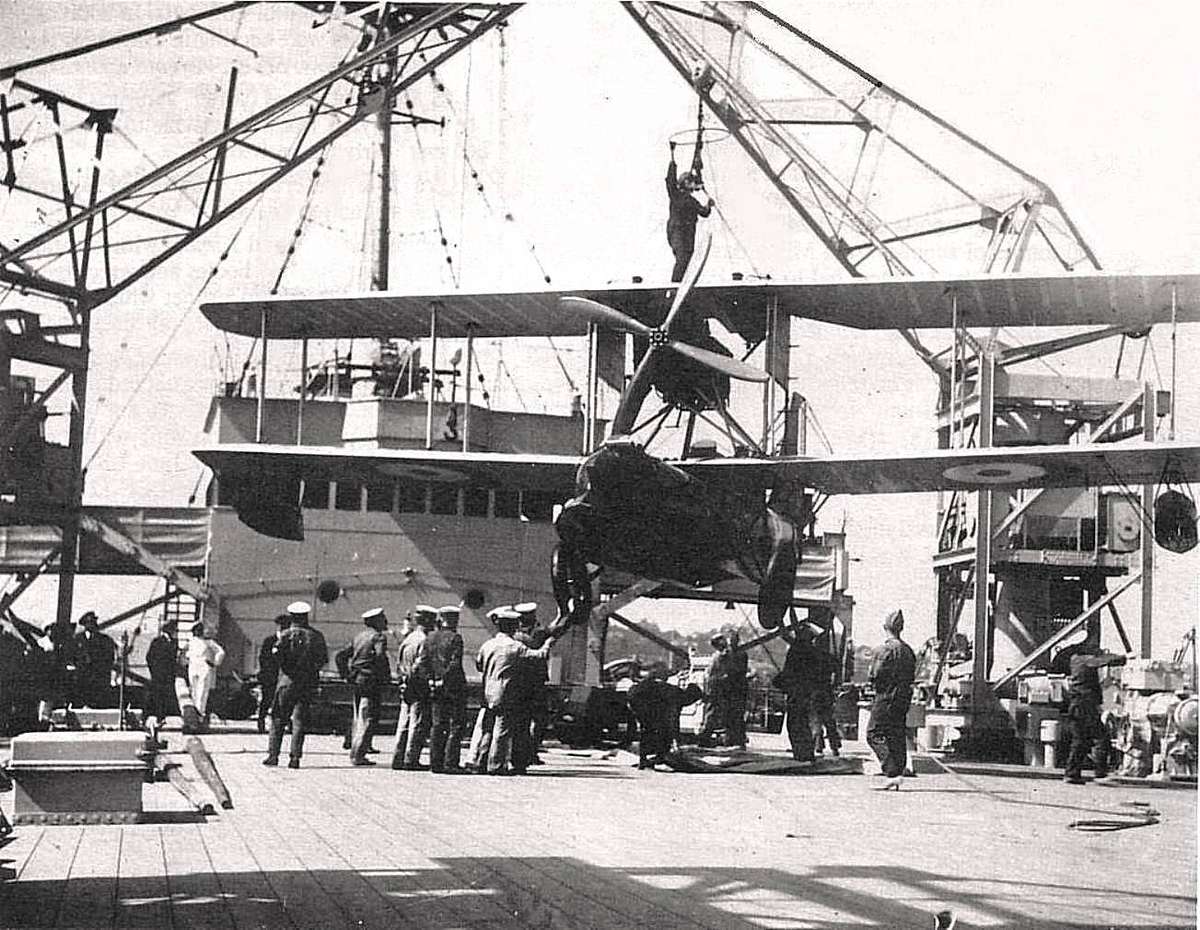 When the decision was made to build HMAS Albatross in 1925 it was a time of rapid change in aircraft design and the emergence of the ‘flat-top’ aircraft carrier. Arguably, she was, in design terms, dated from the very beginning – yet she made an important contribution to the progress of aviation in the RAN. In spite of the Seagull 111’s poor performance, the lessons learned led to the highly successful Seagull V and its Walrus twin. Although rendered obsolete by the aircraft carrier, HMAS Albatross proved valuable in developing the necessary cooperation between the RAN and the RAAF Fleet Cooperation Flight No 101. This was useful as within a few years the world was at war. Serving in the RN as HMS Albatross during WW2, she did important escort and anti-submarine duties in the South Atlantic and her valiant work during the Normandy landings earned her a place in history. That she returned to Australia as a migrant ship under charter to the International Relief Organisation simply adds to the honour.

A Name To Remember

Since August 1948 the Naval Air Station at Nowra, NSW, HMAS Albatross has carried her proud name.