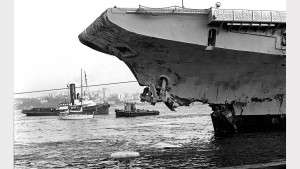 On the night of 10th February 1964 the RAN’s flagship and only operational aircraft carrier HMAS MELBOURNE collided with the Daring Class destroyer HMAS VOYAGER.

At the time of the accident LCDR ‘Toz’ Dadswell, the Commanding Officer of 816 Squadron operating Fairey Gannet twin engine ASW aircraft, was approaching the carrier in preparation for deck landing practice. Thirty four years later CDRE Dadswell wrote the following article for the RAN Flight Safety Magazine ‘Touchdown’.  It is reproduced here in memory of the eighty-two men who lost their lives in that dreadful event over 50 years ago.

In February 1964 I was Commanding Officer, 816 Squadron. A very short work-up with MELBOURNE was planned, but as the majority of the squadron pilots were ‘old hands’ I wasn’t too worried. The work-up commenced on Friday 7th and it was intended that the Squadrons would embark on Wednesday 12th. The only pilot who didn’t have deck landing experience was LEUT David Farthing, so I took David out to the ship in the Observer’s seat on Friday 7th to give him a look at the deck and to experience an arrested landing. On Saturday 8th the squadron did daytime arrested landings and catapult shots. There were no problems. Sunday was a day of rest and we started again on Monday 10th with more day arrests and cats. At times we would taxi forward into the parking area and shut down so that the flight deck crew could practice their drills of moving aircraft around the deck.

Night touch-and-goes (T & G) were planned for the night of the 10th. The program was: 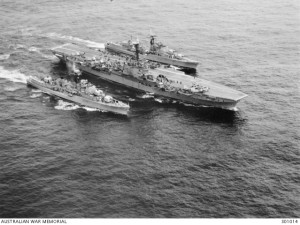 HMAS Melbourne in company with HMAS Voyager and Vendetta.

It was usual for a pilot to complete at least six satisfactory T & Gs in a half-hour session. My senior pilot, LEUT Ray Morritt, led the first sortie of three Gannets. They carried out a successful session although the ship had trouble finding any surface wind. I spoke to Ray on the aircraft line after he had landed and as I was pre-flighting my aircraft for Serial 3.  I clearly remember him saying, ‘They are having trouble finding a wind and its bloody dark out there’. He was right on both counts.

David Farthing was to fly the second aircraft in Serial 3. When we started engines David had a minor serviceability problem so I told him to see if the ground crew could fix it, and if they could, then come out to the ship independently. I took off at 2040 and over Jervis Bay I passed the two Venoms from Serial 2 on their way back to ALBATROSS. They told me that their sortie had been cancelled due to a lack of wind.

Ray Morritt had been right; it was ‘bloody dark’; however, because of the darkness it was easy to spot the lights of MELBOURNE from our departure point over Point Perpendicular. She was about twenty miles away to the southeast. After clearing the coast I changed channels and called the ship. LCDR Gordon McPhee, Lieutenant Commander (Flying) answered and advised that the ship was searching for wind. A short time later Gordon called and advised that the flying course would be 020 and my Charlie time (land-on time) was 2100. My task was then to position my aircraft to join the circuit, fly past the starboard side of the ship at 400 ft, turn down wind and make a final approach so that the wheels hit the deck at 2100.

I approached the ship from the port quarter in a descending turn. I noted that VOYAGER was not in the correct RESDES (Rescue Destroyer) position and mentioned this to my observer LEUT Barry Henry. Then at 2056 a huge ball of flame lit the sky. It was the boiler room of VOYAGER exploding. I levelled out and remarked to Barry, ‘MELBOURNE’s collected VOYAGER’. (There was a crude exclamation preceding the remark but the Royal Commissioner decided that it was best forgotten.) Gordon McPhee called and advised me to conserve fuel as there was a problem. A master understatement!

As a result of the collision MELBOURNE had lost a number of aerials which had been lowered to the horizontal position for flying, so the ship asked me to activate the rescue services at Nowra. I switched channels and advised Nowra that there was an emergency and to send all available helicopters to the scene and to also sail the search and rescue craft from Jervis Bay. I did not mention the collision as I knew there were people who monitored our frequencies in the hope they would get a story to sell to the media. ALBATROSS, without knowing what had actually happened, reacted immediately.

It was an outstanding effort by the helicopter squadrons and in a very short time helicopters were over the accident area. In fact at one stage there were probably too many aircraft in the one small area. I remained over the area for the best part of an hour passing messages from ship to shore. I landed at ALBATROSS at 2205 and reported to ALBATROSS’s Commanding Officer, Captain Mesley, in the tower. The entire air station was a hive of activity. In the early hours of the morning of the 11th the acting Minister for the Navy, Dr Forbes and RADM Becher, the Fleet Commander arrived by aircraft from Canberra. They were briefed and then transferred to MELBOURNE by helo. 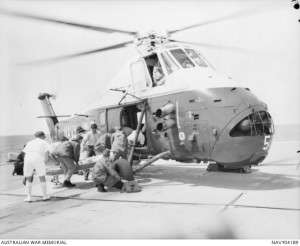 A Wessex loads a stretcher case for CASEVAC

At first light the fixed wing squadrons had aircraft in the area and we continued to fly all through the day in the hope of finding survivors. The helicopters were also searching. The weather was very calm but the oil slick and the wreckage was moving southeast at a remarkable rate. My log book shows I spent over six hours searching that day and other aircrew would have done more than that. It was a long 24 hours. The maintenance crews did a wonderful job to keep the maximum number of aircraft flying.

Although the MELBOURNE-VOYAGER collision was a dreadful disaster and had a major impact on the RAN and the country, I don’t think it created any great problems for the Fleet Air Arm at the time. It was seen as a ‘fishhead’ ie, General Service, error. However, the MELBOURNE-EVANS collision in 1969 started people thinking and talking about the need for a carrier in view of the losses incurred.

After the VOYAGER collision I can’t remember anyone questioning the value of having a carrier in the RAN, but after 1969 I can remember being asked if we really did need a carrier. People began to associate the carrier with calamity. There was an emotional issue introduced into the carrier debate.