Peter Charles Ward was born on 24 August 1945 at Frankston, Vic. He enlisted in the Royal Australian Navy (RAN), at Melbourne, on 11 February 1963 and was drafted to HMAS Cerberus (Flinders Naval Depot) at Crib Point, south of Melbourne, as a Midshipman (SL) for entry level Basic Training and selection for Aircrew Training.

Having completed his Basic Training and qualified for Aircrew Training, Ward was transferred the Royal Navy (RN) on loan for flying training on 20 August 1963. On arrival in the UK on 02 September 1963 he was assigned to RAF Linton-on-Ouse for Basic Aircrew Training Part 1, which he successfully completed. He was then promoted to Acting Sub Lieutenant to date 14 May 1964, with a provisional Pilots Brevet, and granted a 7-year Short Term Commission in the RAN.

Returning to Australia on 31 May 1964 Ward was posted to HMAS Albatross, the Naval Air Station at Nowra for Advanced Helicopter Training with 723 Squadron, which specialised in rotary-wing training. With the arrival of the Westland Wessex anti-submarine helicopters in 1962, the demand for skilled helicopter pilots increased. Pilots converting to rotary wing at 723 Squadron used the Bell l UH-1 Iroquois utility helicopter, which enabled pilots to quickly learn the basics before moving on to the more complex Wessex.

The next move on 06 July 1964 was to 725 Squadron. Here Ward began the lengthy process of converting to the Westland Wessex HAS 31A anti-submarine helicopters. Once qualified the next step was to complete the No. 4 & 5 Operational Flying School (OFS) courses. The OFS training aimed at bringing pilots up to full operational standard, involving many hours of intensive flying in day and night-time exercises, with a major focus on navigation, ASW sonar vectoring exercises and flight-deck training. It included time at HMAS Watson,at Sydney’s South Head, for Underwater Control studies and some familiarisation experience on the carrier HMAS Melbourne.

Having completed the OFS courses Ward was drafted to 817 Squadron the front-line ASW helicopter squadron on 28 November 1964. Then in February 1965, 817 Squadron embarked on HMAS Melbourne for deployment to SE Asia for SEATO and other international exercises. This provided Ward with valuable front-line experience – including promotion to Sub Lieutenant (P) on 15 May 1965. Ward remained with 817 Squadron completing more time on Melbourne in 1966.

The Wessex helicopters were leading-edge anti-submarine warfare (ASW) aircraft – their dunking soar made them very effective in detecting submarines. Sub Lieutenant Ward showed considerable ability as an ASW pilot and was nominated for a Qualified Helicopter Instructor (QHI) course in the UK – which he began at RAF Ternhill, England, on 17 April 1967. Graduating QHI on 24 June 1967 he was made Lieutenant and returned to Australia where he was posted to 723 Squadron and began training for the RAN Helicopter Flight Vietnam, due to deploy in September 1968.

On 05 June 1968, Ward flew Bell UH-1 Iroquois helicopter N9-881 to Beecroft Peninsula Weapons Range to clear the navy’s rifle range, prior to a practise shoot. The helicopter dropped one passenger on the range and then conducted a low impromptu flypast over him, before hitting a small mound nearby.  The aircraft broke up when it struck the ground a second time, and the wreckage plunged over the cliff and into the sea some 90 metres below.  LEUT P.C. Ward, his aircrewman POACMN D.J. Sanderson, and his SAR Diver NAM R.K. Smith all lost their lives.

LEUT P. Ward, PO D. Sanderson and NAMAE R. Smith lost their lives in a Bell Iroquois helicopter that crashed on or near Beecroft Range on 05th June 1968. 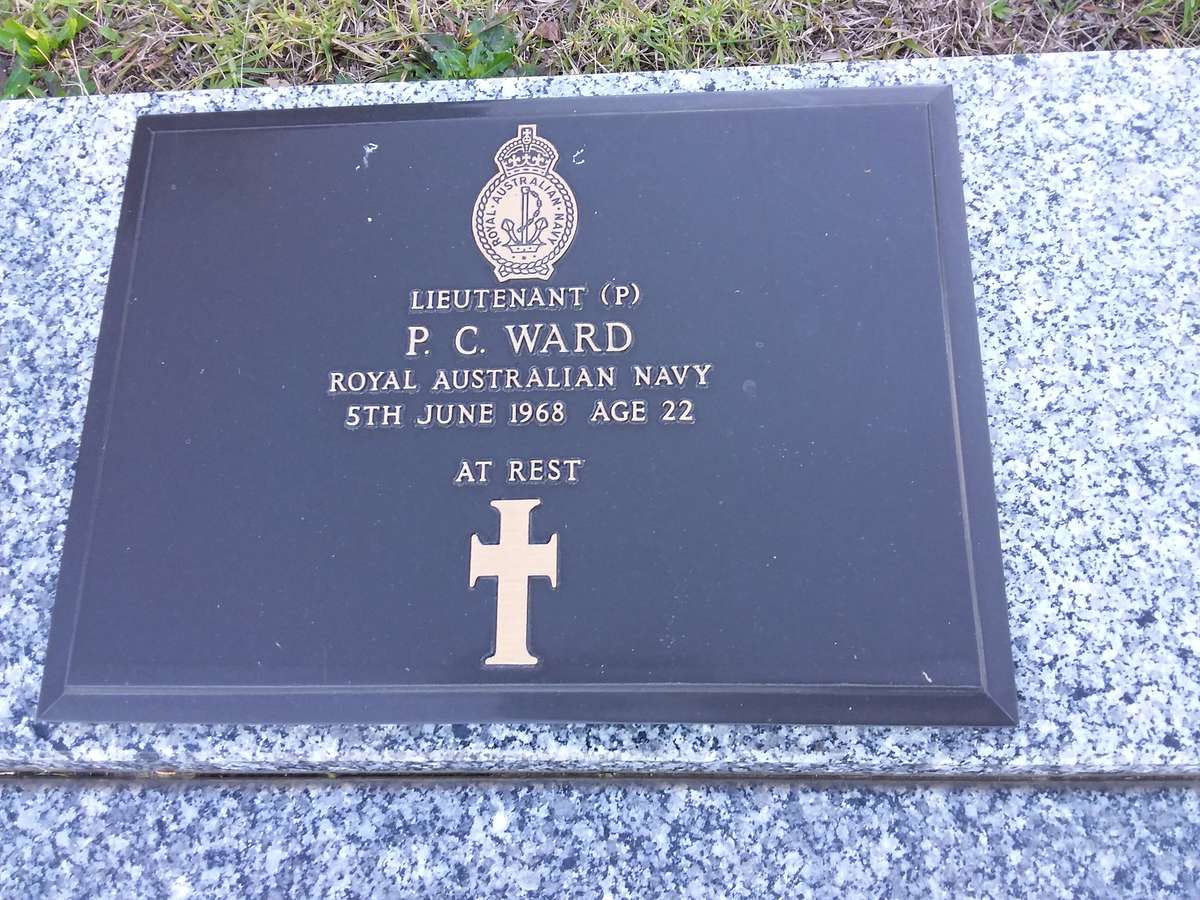