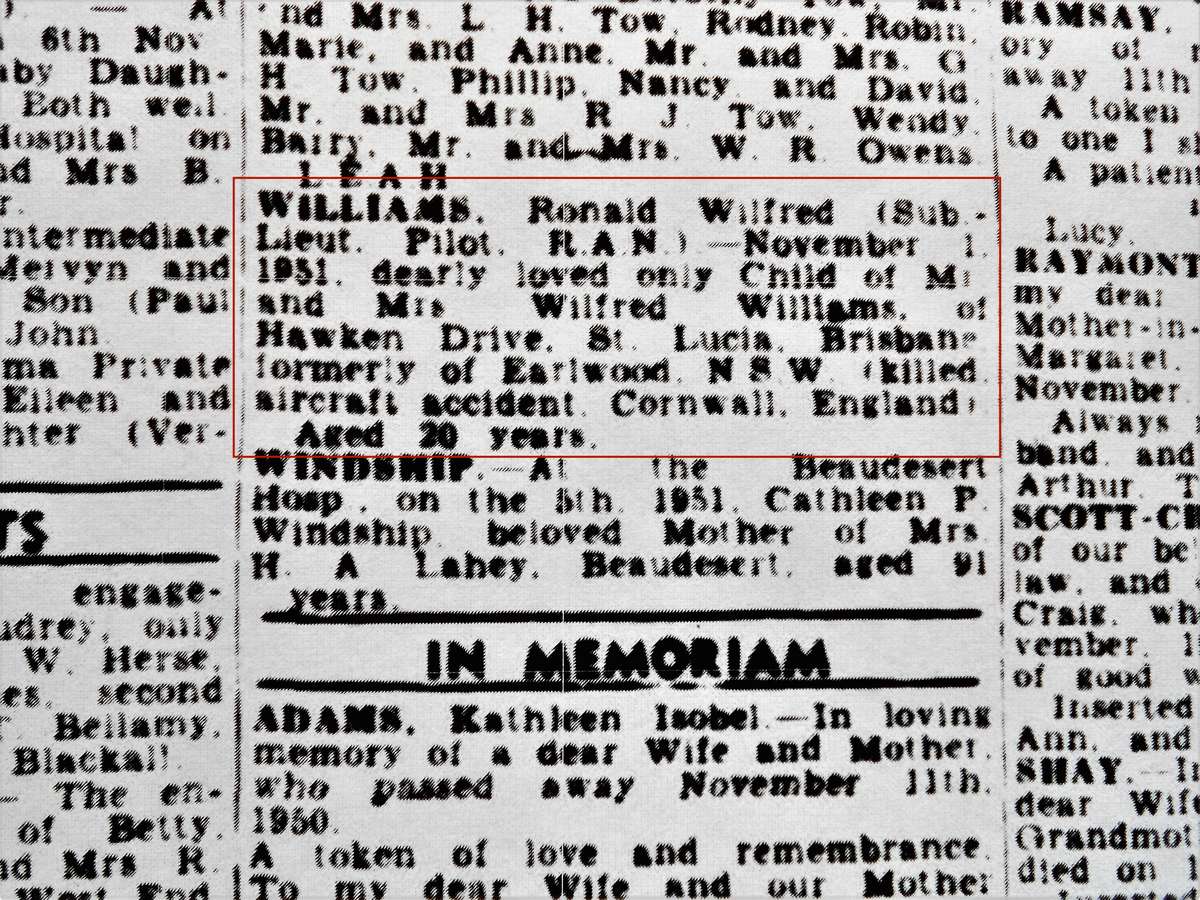 Ronald Wilfred Williams was born on 12 October 1931, at Ashfield NSW, the son of Ruth and Wilfred Williams. At some point the Williams family moved to Queensland as, Ronald enlisted in the RAN for 12-years at Brisbane (QLD) on 1 June 1949. His civilian employment was listed as clerk. Next-of-kin was his father Wilfred Williams of Toorak Road, Hamilton, Brisbane.

On 1 June 1949 Williams was drafted as a Recruit Naval Airman to HMAS Cerberus (FND), near Melbourne, the main RAN training depot to begin his basic training and aircrew assessment. On 30 August 1949 he was rated Probational Pilot 1 and drafted to RAAF Point Cook for flying lessons at the No. 1 Flight Training School. This involved flight theory and lessons on the Link Trainer followed by DH 82 Tiger Moth lessons, before moving on to fly the more powerful Wirraway aircraft.

After gaining his ‘wings’ and graduating from RAAF Point Cook, Williams returned to HMAS Cerberus on 4 March 1951 to be promoted to Acting Sub-Lieutenant (P) – on a Short Term Commission – and to attend a Divisional Course prior to being sent to the UK. The practice at the time was for RAN Fleet Air Arm (FAA) trainees to be sent on loan to the Royal Navy FAA air stations for further training and experience on more advanced front-line aircraft.

On 31 March 1951, Williams embarked on RMS Orontes for passage to the UK. On arrival, on 9 May 1951, he was posted to HMS Fulmar RNAS Lossiemouth, in Scotland, to start his conversion course at the Flight Training School where he began his No 1 Operational Flying Training (OFT1) Anti-Submarine Course. This involved flying in a dual trainer before going solo in a Fairey Firefly, and starting the process (among other things) of long range navigation over the sea; and the intricacies of landing and taking off from the deck of an aircraft carrier.

On 20 August 1951 Williams was drafted to HMS Seahawk RNAS Culdrose, in Cornwall, where he began his No 2 Operational Flying Training. This meant learning to fly aircraft on fighter missions. Apart from training in fighter tactics, night flying, and exercising with fleet units, weapons training played an important part in the course, where rocketing, bombing, and the firing of 20mm cannons were carried out in realistic exercises.

It was during a weapons training exercise that, on 1 November 1951, Sub Lieutenant (P) Ronald Wilfred Williams was killed. He was engaged in a low-level bombing run when his Seafire failed to pull out of a dive and hit a railway embankment.