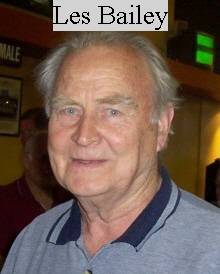 The FAAAA regrets to announce the passing of our most senior Aircraft Handler. Bill Bailey passed from a suspected heart attack on 18 January 2016.

Born in Yorkshire in 1924, Bill joined the Royal Navy at the age of 18 and was awarded his wings in late 1943 as a Telegraphist Air Gunner.  He subsequently transferred to the RAN and trained as an Observer in the UK before embarking to Australia aboard HMAS SYDNEY in 1950, bound for Nowra.

Shortly afterwards he failed his aircrew medical and transferred to the Aircraft Handler’s branch.  He was promoted to Chief Airman in 1952.  He subsequently served on HMAS SYDNEY, MELBOURNE and CERBERUS.

Bill left the Navy in 1968 and after a short stint as a Reservist,  worked as the furniture officer at Albatross until his retirement in 1989 at age 65.   In 1993 he was awarded the Meritorious Medal for his service to the RSL, followed by an OAM in 1994 by the then Governor of NSW Admiral Sinclair (who served with him as a Midshipman on Sydney).

He had a quadruple heart bypass in 2004 but survived a further eleven years before passing away at the age of 91.

Perhaps a measure of his professionalism and the esteem with which he was held can be summed up by the comment of a notable Aircraft Handler on hearing of Bill’s death:

‘Bill taught our CPOs and POs handling to such a degree that no fatal injuries were ever had on our flight decks relating to handlers.’