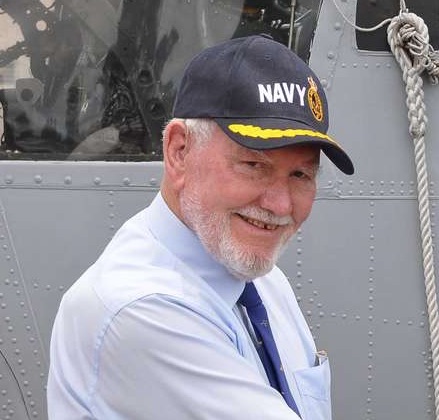 I regret to advise that Peter Bell has informed me that his father, my old friend and compatriot Commander Edward Stannington Bell (Eddy to RAN associates; Ed to those in civil aviation circles), passed away on Friday 4th June in Canberra, aged 88.

In April 1955, Ed Bell, a 22-year-old boilermaker-welder from Broken Hill, enlisted in the RAN as a Recruit Naval Airman – Aircrew.  He commenced pilot training with the RAAF in July 1955 and was promoted Acting Sub-lieutenant on graduation in October 1956.

A month later, in November 1956, he posted to HMAS Albatross and commenced Operational Flying School in RAN squadrons.  A cycle of postings to 723, 724, 725, 816, 817 and 851 Squadrons was the typical pattern over the next eight years, including front-line squadron service in the aircraft carrier HMAS Melbourne.  He was promoted Lieutenant in 1958.

Eddy was posted to the UK for the Qualified Helicopter Instructors’ course and two years exchange with the Royal Navy. After a short holding pattern in 706 Squadron he was appointed as Senior Pilot of the basic helicopter training squadron 705. This was a surprise to everyone as that slot was considered by the RNs as a career progression posting, and it was therefore a unique feather in his cap.

Upon promotion in 1966, Ed was appointed Lieutenant Commander-‘Flying’ in HMAS Melbourne, and on two occasions he commanded 725 Squadron, (Jun’70 – Feb’71 and Oct’71 – Oct’72) with Wessex helicopters.

The Sea King Flight UK was established in 1974 and the newly promoted Commander Ed Bell served as the Officer in Charge for the acceptance and testing of the RAN’s latest anti-submarine helicopters.  He then took command of 817 Squadron for a very brief period when it re-equipped at HMAS Albatross with the Sea King in 1976.

As often occurs, promotion brought with it postings away from the aviation world and Ed then worked in the Directorate of Naval Recruiting before retiring in 1982.

Ed Bell maintained his involvement in helicopter aviation, becoming an Examiner of Airmen with the Civil Aviation Safety Authority and then Chief Pilot with a major Australian commercial helicopter operator.  Apart from aviation, Ed enjoyed touring on his BMW motorcycle well into his senior years.