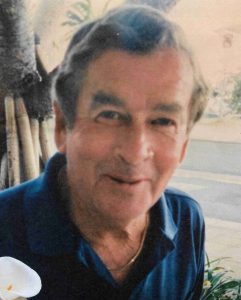 We have been advised of the death of Barry Lister on 23 June 2022, late of QLD Division, following a fall and subsequent head injury.

Barry Fredrick George Lister was born on 05 December 1936 and joined the Navy in March 1954. He had applied for pilot training in the Fleet Air Arm, but it was recommended that he do engineering.  He did his mechanical training at Nirimba on the Griffon74 (Firefly) and later the Bristol Centarus (Sea Fury), before returning to Albatross and a 2nd line squadron.  He transitioned to Gannets (Double Mamba) when HMAS Melbourne arrived.  He embarked in 1957 and did the 1958 trip to Asia, Japan and Hawaii.

Following this trip he was recommended for a mechanicans course and became a Petty Officer.  After the mechs course he, together with Mick Blair, was responsible for un-crating and assembly of the Wessex helicopters and their allocation to squadrons.  He spent his remaining time in a supervisory role on these aircraft.  In 1962 he was promoted to Chief Petty Officer Mech1.  He took his discharge from the Navy at the end of 1966.  He was very involved in the RAN Gliding Association and represented it at competitions.  He also represented Navy at hockey.

In March 1967 he travelled to the UK, where he again became involved with aircraft, in maintenance and in buying, refurbishing and selling light aircraft. He worked on the Concorde, was involved in Hotel management, and was involved in a salvage attempt on the Lusitania in the Irish Sea.  On his return to Australia some 18 years later, he got into Real Estate having his own business which in time he expanded to three offices.

Barry was instrumental in forming the Qld division of the Fleet Air Arm Association and was elected the first president, a position he held for 24 years until illness caused him to step down.  A few years ago he wrote a book, mainly anecdotes of his life, called “ Just Winging It”

May he Rest In Peace.