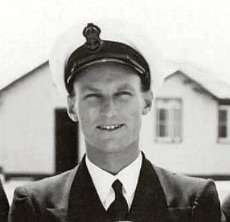 Graham was born in Adelaide on 31 May 1931 and attended the then Queens College before training as a draftsman. He was a first-class cricketer and represented both South Australia and Tasmania at Hockey.

He entered the RAN as a Recruit Naval Airman (Aircrew) in NAAC Class 9 on 31 August 1953, a course unique in that all nine entrants graduated and were commissioned. Eight became pilots and one an Observer. Graham was one of the pilots and did his OFS on the Fairey Firefly which concluded with Deck Landing Qualification in the Firefly on the straight deck of HMAS Sydney.

Among the first to convert to the Fairey Gannet in Australia he joined 816 Squadron and did a number of deployments to the FESR as an ASW pilot before moving to and from a number of second line squadrons at RANAS Nowra. In 1958 he was one of a select few who carried out cross deck operations with the USN on the USS Philippine Sea (CVS 47, an unmodified Essex Class carrier). Although offered a permanent commission he chose to leave the RAN in 1962 at the end of his Short Service Commission.

He then joined Qantas where he commanded both Boeing 707 and 747 aircraft and logged some 20,000 flight hours during his career.

He died in North Gosford Hospital on 28 May 2020 just 3 days short of his 89th birthday and is survived by Jan, his wife of 62 years, three children, seven grandchildren and nine great grandchildren.

(With thanks to Jerry O’Day)