Harold Beardsell Brearley was born in St Helens, Lancashire in October 1897[1] and spent his early years there. He was educated at Lymm Grammar School and, later, Liverpool University where he was studying engineering. By 1916, the family had moved to Stockport and were living at 11 Edenhurst Road, Mile End. On 29 October of that year, he left his studies and joined the Naval Air Service. Followingtraining, was granted a temporary commission on 2 July of the following year.

His record marks him as posted to the Royal Naval Air Service at Crystal Palace – Chingford – Cranwell, with the rank of Probationary Flight Officer (PI38469).  He was then posted to Calshot Naval Air Station, where he graduated from his flying course on 23 September 1917 with a recommendation for Service with the Grand Fleet with a ‘Very Good Pilot and Efficient Officer” endorsement.

He was posted to Pegasus on 01January 1918 and loaned to HMS Dublin and HMAS Sydney. The latter was undertaking flying trials using rotating platforms over the ship’s main armament. The capability was demonstrated for the first time on 8 December 1917 by Brearley and tested again on 17 December, with such success that Admiral Batty directed all light cruisers, except those carrying kite balloons, be fitted with decks of similar design. From early 1918 the more powerful Sopwith 2.F.1 Camel replaced the Pup as the Grand Fleet’s front-line fighter, and Brearley was sent to learn how to fly the new aircraft.

The characteristics of the Camel were described as follows:

“Unlike the earlier Sopwith Pup and Sopwith Triplane, which were docile to fly and well-liked by pilots, the Camel was unstable, requiring constant input from the pilot. The gyroscopic effects of its powerful rotary engine made it dangerous for novice pilots, and almost as many were killed in accidents as died in combat. But its instability also contributed to it being agile and manoeuvrable, and once its tricky characteristics were mastered, the Camel was a superior fighting airplane.”

Harold Brearley became one of its victims on 30 January 1918 when, during his conversion to the Camel, he spun into the ground while detached ashore at East Fortune airfield.

The Stockport Advertiser reported that “On the day of the accident, he was trying a powerful machine and, having accomplished a successful flight, was descending when the machine crashed to the ground. Sub-Lieutenant Brearley receiving such injuries that he died a few hours later.”

‘Also of Harold Beardsell BREARLEY, Sub Lieut. R.N.A.S. the dear grandson of the above named aged 20 years Who was killed whilst flying at Granton, N.B. 30th Jan 1918 and was interred at Seafield Cemetery, Leith’.

Material below is held, pending work to consider whether Brearley’s Service qualifies him for the Association’s Roll of Honour.

Above: Images from the National Archives, showing Brearley’s record.  Note on the second image (marked page 207) the words:  “Lent to Dublin and Sidney [sic] where he has been conducting experiments with success”

Above left. An excerpt from the ‘Log Book’ of James Reynolds Clifford, an AB in HMAS Sydney and held by the Australian War Memorial. It was forwarded to the webmaster by Dr David Stevens of the Australian War Memorial.  Note the entry on Tuesday 5th February (six days after Brearley’s crash), which records “pm received news Sydney’s airman killed whilst learning to fly new “Camel” aeroplane, with which ‘Sydney’ had to be supplied.  Another airman appointed…”  (The Camel did indeed replace the Pup as the Royal Navy Air Service’s front line fighter)  (Note, out of interest, Flight Sub-Lieutenant Albert Sharwood replaced Brearley).
Above Right: Excerpt from p.260 of David Steven’s book “In All Respects Ready”, which gives an account of the trials aboard Sydney and Brearley’s role.   (OXFORD ISBN 978 0 19 557858)

Above. Excerpts from the diary of Leading Signalman John Williams Seabrook, HMAS Sydney, courtesy of the Australian War Memorial.  Top left records an entry for Tuesday 5th February 1918 as follows:  “Received sad news that HMAS Sydney’s airman – Flight Sub Lieut Brearley – killed in a flying accident. He was sent from Scapa to East Fortune Air Station, near Edinburgh to learn to fly a Camel aeroplane, as the ship was being supplied with an aeroplane of this class.”  Above right: Entry for Saturday 8thDecember 1917 makes mention of the flying trials: “Sydney tested her flying off arrangements. Satisfactory in every way” and again: “Had a second flying off test. More than successful.”

Above. Further excerpts from the diary of LS John Seabrook.  Left (marked page 168) mentions flying off on 8thDecember 1917 – viz: “A  Squadron of American Battle Ships arrived at Scapa. Our Aeroplane made the first flight off the new platform which was a great success.” Right: Entry for February 27th1918. “Our new Flight Officer made his first flight off the ship.”  The officer was not named but we know it was Sharwood. The entry suggests that he, like his predecessor, was attached to the ship.

The Seafield Cemetery near Edinburgh has two memorials carrying Brearley’s name.  Left: The ‘Communial Burial Memorial’.  This doesn’t mean they were buried in a communal grave – rather, their names are displayed on a communal list.   Below.  An individual memorial erected on Brearley’s grave, probably organised by relatives. The inscription reads  “Sacred to the memory of Harold Bearsell Brearley Flt Sub. Lieut. R.N.[A.S.] Aged 20 years. Accidentally Killed Jan 30th 1918.”  (With thanks to Edinburgh Crematorium Limited). 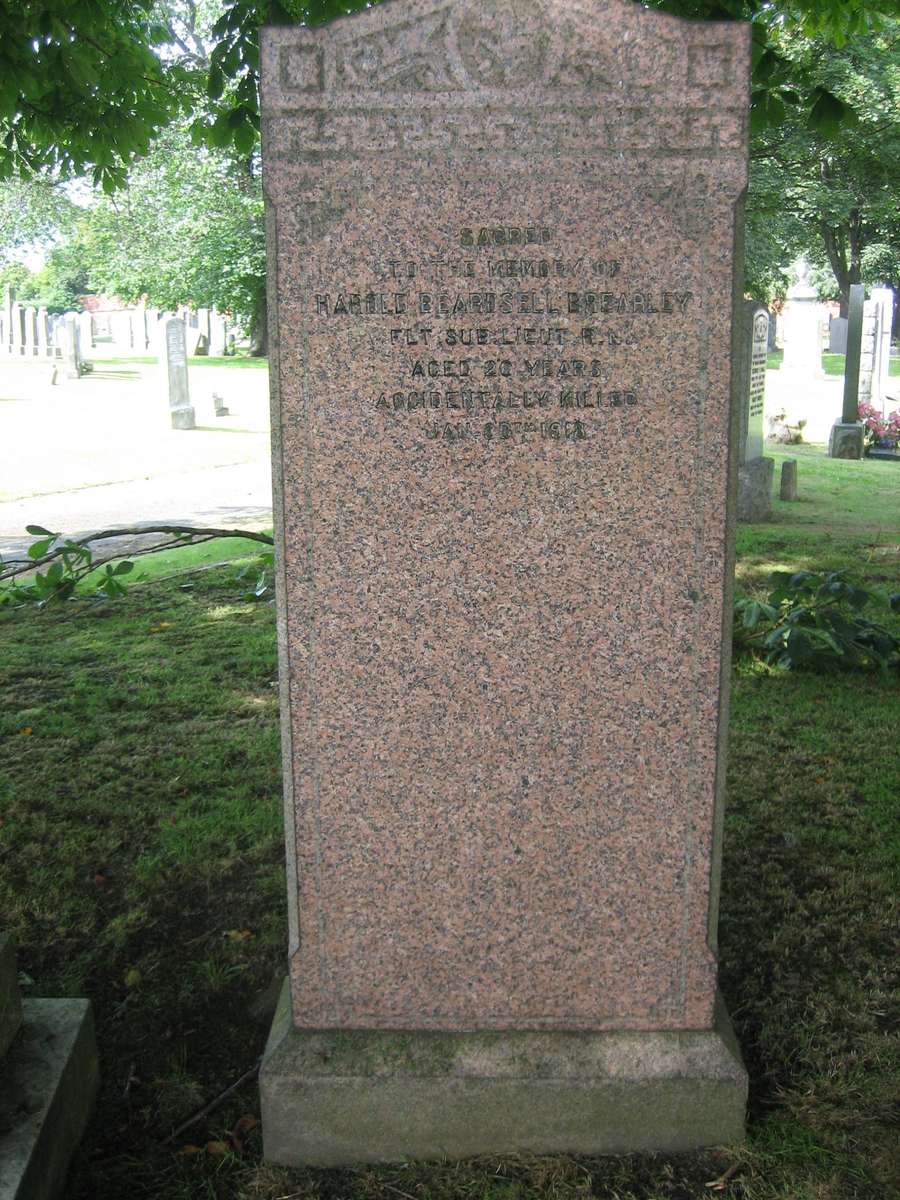 With thanks to Stephen Benson, Cheshire Roll of Honour.