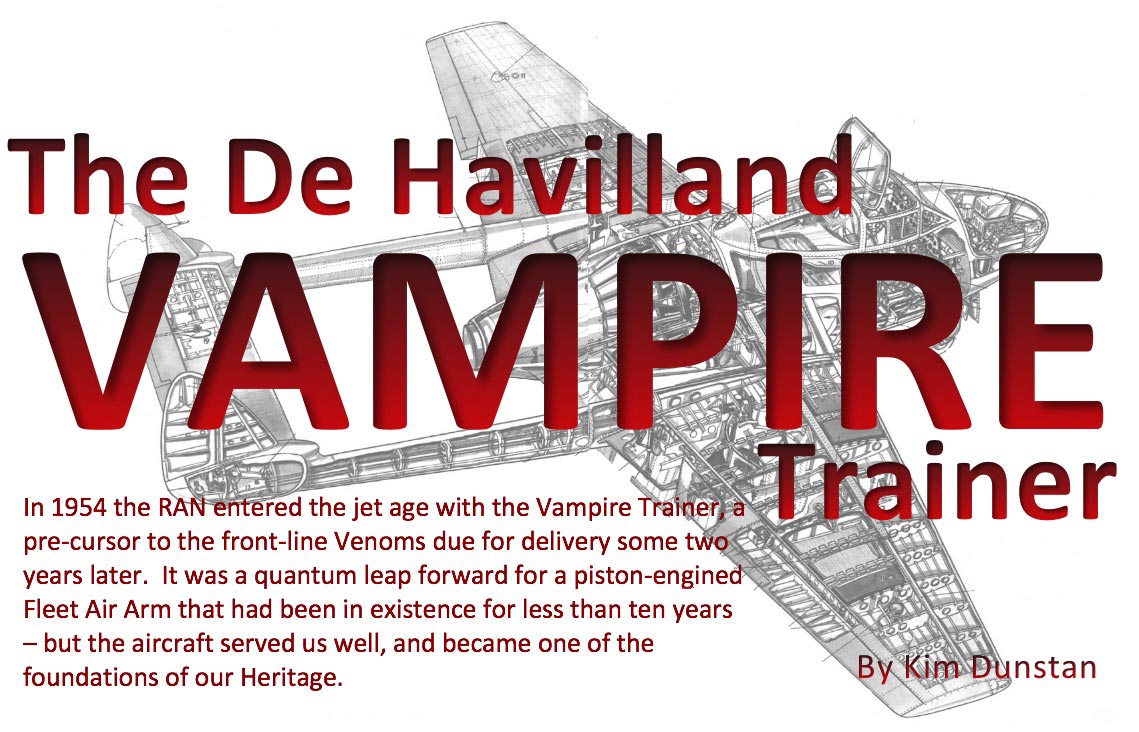 The DH Vampire T.34 trainers delivered in 1954 were the first jet aircraft obtained by the Royal Australian Navy (RAN). The twin-seat Vampires were chosen to train pilots as they shared many of the characteristics of the new DH Sea Venom aircraft due to arrive in 1956, on the RAN’s new Majestic-class aircraft carrier HMAS Melbourne. A total of 10 Vampires were purchased between 1954 and 1959, operating from the RAN Air Station HMAS Albatross at Nowra NSW until 1970, when the CAC Aermacchi MB-326 (Macchi) trainers replaced them.

The DH Vampire trainers were a variant of the British single-seat Vampire jet fighter-bomber first operated by the RAF in 1946. The initial DH-115 trainer was based on the two-seat Vampire NF-10 night-fighter, which had been flying since 1945. Built at the de Havilland plant at Christchurch, England, the prototype trainer was first flown in November 1950. Modifications included side-by-side dual controls and the DH Goblin 35 turbojet. It proved to be a success, meeting the demand for an advanced jet trainer for the RAF and export markets – generating orders for 732 of the T.11 model. Another variant, a navalised carrier-capable Sea Vampire F20 was used by the Royal Navy for jet training – the RN also purchased 73 dual control Vampire T.22 trainers – four of which were later sold to the RAN. 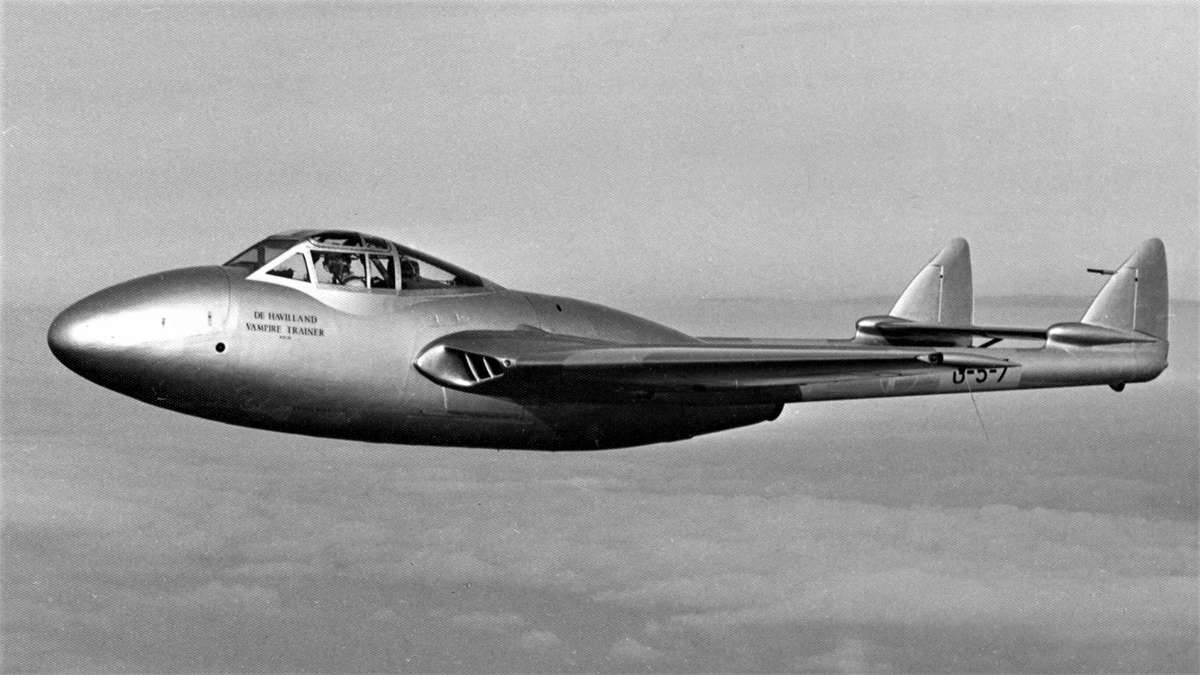 The prototype DH Vampire Trainer, which first flew some five years after the single seat fighter.

In the early 1950s with the RAN preparing for the arrival for the DH Sea Venom FAW 53 fighters the focus at RANAS Nowra was on pilot training. At the time the De Havilland Australia (DHA) Bankstown works, near Sydney NSW, were producing licence-built Vampire T.33 trainers for the RAAF. The RAN ordered five Vampire T.34 trainers (serial A79-837 to 841) delivered in 1954. The T.34s were navalised but similar to the T.33, with framed canopies, no ejection seats, lower fuel capacity, and original tail fins without curved fairings. Underwing drop tanks could be fitted, but no weapons were carried. Dummy 20mm cannons installed in the T.34s were for ballast only. (Note: The RAN’s Vampire trainers were land-based and not carrier-borne).

Adapting to the Vampire Jets

With the arrival of the Vampires at RANAS Nowra the main task was converting piston-engine pilots to turbojets; thus preparing the RAN Fleet Air Arm for the jet-age. Pilots converting to the DH Vampire found them pleasant to fly with good stability and docile handling. Although the cockpit was cramped, the side-by-side seating and dual controls made them an effective advanced trainer. The tricycle undercarriage was better for landing and taxiing – a step-up from tail-wheelers. While the Goblin 35 engine provided plenty of thrust, pilots needed to adjust to the speed of the Vampire during the first few landings. Acceleration at take-off was lively with lift-off at around 110 knots, ‘touch-down’ was generally at about 95 knots.

Piston-engine pilots doing a Vampire conversion needed to adjust to its turbojet and throttle control quirks. Anticipating power needs was essential as the Goblin 35 engine took time to spool-up, and to avoid rapid throttle movements to prevent engine surge or a flame-out. However manoeuvring and control surface responses were good and aerobatics a pleasure. Stopping on a tarmac taxiway or airstrip was discouraged as hot exhaust from the tailpipe could damage asphalt.

The benefit of the dual controls and side-by-side seating for pilot and instructor greatly assisted the transition to jets. DH Vampire tutelage at RANAS Nowra was under the direction of Qualified Flight Instructors (QFI). Select pilots with lengthy service would spend time at RAAF East Sale gaining the necessary credentials to become QFI. The RAN set high standards for its pilots. 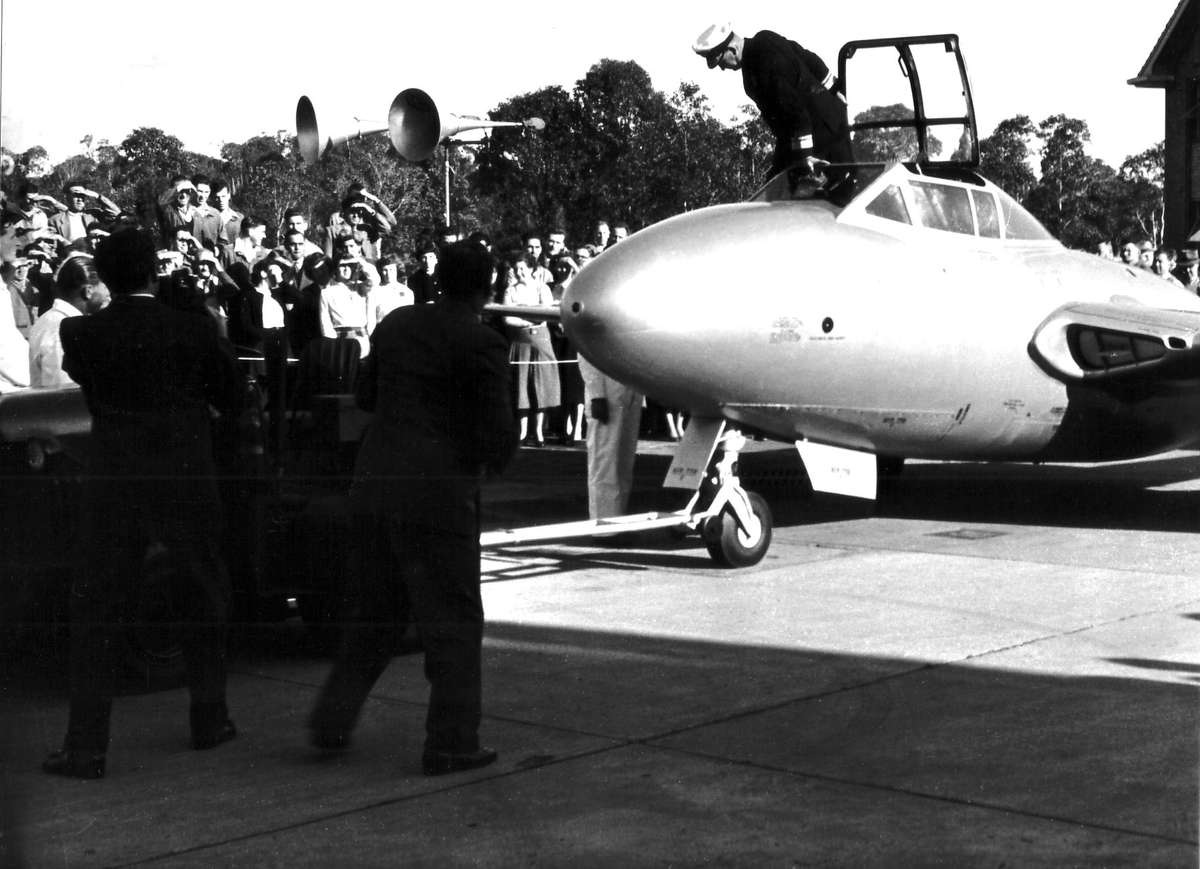 The primary role for the Vampires at 723 Squadron was to operate as land-based trainers for Sea Fury pilots and others converting to the DH Sea Venom fighters. Because 723 Squadron was the Fleet Requirement Unit (FRU) the Vampires also assisted RAN ships near Jervis Bay with radio and radar calibrations, also interception exercises for the ship’s gunnery crews.

On 1 June 1955, 724 Squadron was recommissioned as RANAS Nowra’s fixed-wing training squadron. With the new Sea Venom fighters and Fairey Gannets due to arrive in May 1956 the aim was to build-up a core of qualified aircrew. When 723 Squadron was decommissioned, on 25 October 1956, the Vampire trainers transferred to 724 together with the Wirraway, Firefly and Sea Fury aircraft. While the main body of Sea Venom pilots were being trained in the UK, the priority for 724 Squadron was to convert Nowra-based piston-engine pilots to turbojets.

The Vampires were an ideal trainer, as they shared many common characteristics with Sea Venoms, but cockpit details and instruments were different; so pilots needed to be aware of the variations when converting to Sea Venoms – likewise when flying Vampires again.

1956 was a challenging year for 724 Squadron, with the loss of two Vampires in separate flying accidents. On 6 August Lieutenant Commander William Dunlop was the first RAN pilot to be killed in a Vampire (A79-839) when his aircraft crashed near NAS Nowra. On 8 October Commander Daniel Buchanan, NAS Nowra’s Commander (Air), was killed when his Vampire (A79-841) flew into the sea off Greenwell Point during a night-time training exercise.

Despite the DH Vampire’s reliability and their ability to cope with the demands as a trainer there were two more serious accidents. On 11 October 1967, a 724 Squadron Vampire operating at RAAF Laverton (A79-837) crashed during take-off owing to a thrust bearing failure. Fire engulfed the aircraft killing pilot Sub Lieutenant Michael Lynch and FO Samuel Barkley RAAF. On 15 May 1969  Lieutenant Commander Fred Goodfellow was seriously injured when A79-838 crashed while attempting to land at NAS Nowra when hit by turbulence from an approaching thunderstorm.

From 1954 to 1970, 724 Squadron’s Vampire aircraft continued to provide long and useful service, with a high rate of serviceability. At NAS Nowra the Vampires were used to train dozens of pilots and sometimes used by observers and other aircrew. The Vampire trainers were never the glamour machines, but they have a respected place in the RAN Fleet Air Arm annals.

Following the loss of several aircraft a replacement Vampire T.34A (A79-842) was ordered from DHA Bankstown, which was delivered in March 1957. This was the RAN’s sixth Australian-built Vampire – this time with curved tail fairings. From 1958 the RAN Vampire T.34s were progressively modified with bubble canopies (for better all-round visibility) and Martin Baker Mk 3B ejection seats, but the curved tail fairing modification was not included. These modified RAN T.34 Vampires were called T.34A variants.

The RAN acquired its Vampires in groups.  The first five were delivered from the De Havilland Australia facility at Bankstown in 1954. These were the ‘Navalised’ T.34 model – similar to the T.33 with framed canopies, no ejection seats, lower fuel capacity and original tail fins without curved fairings (above left).  The sixth Aussie-built model was delivered in March 1957 featuring curved tail fairings (above right). Later that year one ex-RN T.22 trainers arrived; then three more in 1959.

In addition, four ex-RN Sea Vampire T.22 aircraft were purchased by the RAN retaining their British serial numbers. The first XG770 was shipped to Australia arriving at DHA Bankstown on 9 August 1957 then, after assembly, delivered to 724 Squadron on 24 December 1957; listed for disposal on 17 August 1970. Three more T.22 airframes XA101, XA167 and XG766, were shipped to Australia on the freighter SS Canopic, delivered to DHA Bankstown on 6 August 1959. After assembly they were transferred to 724 Squadron early in 1960. All delisted by the end of 1970.

Given the mixture of Australian-built T.34/34A and ex-Royal Navy T.22 Sea Vampires, cockpit instruments and equipment varied between the different marques, requiring the careful attention of pilots. After training in DH Vampires, pilots converting to DH Sea Venoms needed to adjust to a different cockpit layout yet again – a design issue never remedied.

In 1965, the RAN changed its aircraft serials when it introduced the navy ‘N’ prefix. For example Vampire A79-842’s serial was changed to N6-842 and the British XG-766 to N6-766. The new ‘N’ serials were placed on airframes, usually during major servicing, but many Vampires escaped the change displaying their original serial numbers long after.

Apart from the Vampires primary training role, they were used for Fleet Requirement Unit tasks, exercising with RAN Ships near Jervis Bay and along the NSW South Coast, conducting radio checks, and calibrating the ship’s anti-aircraft radar. Vampires would also be stationed at RAAF Laverton (near Melbourne) for exercises with West Head Gunnery Range and radar tracking for ships in the Port Phillip Bay area and coastal areas. 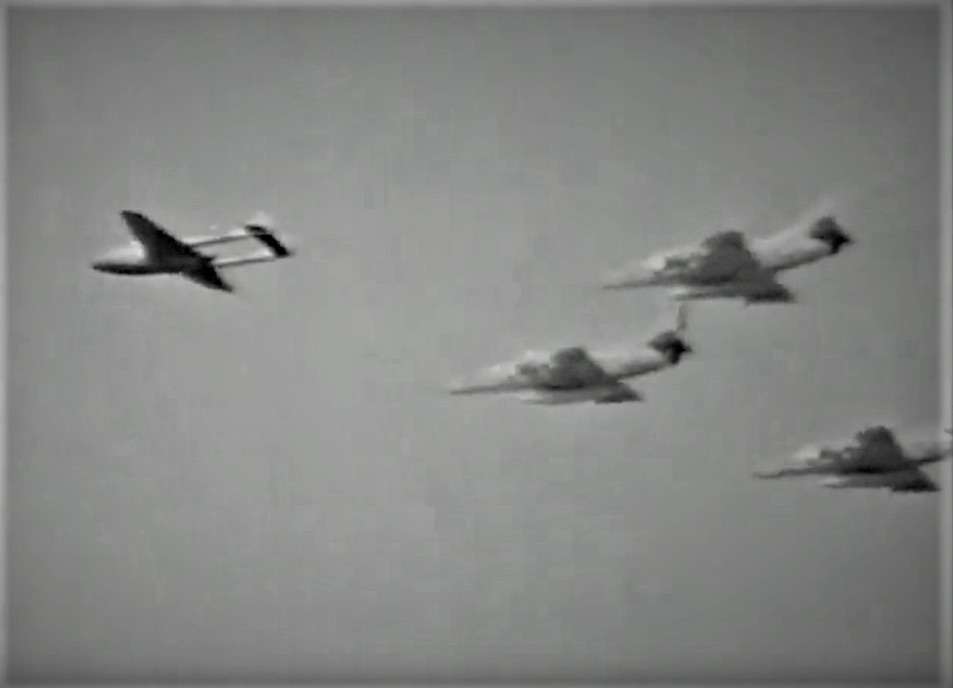 Not a good quality image but a historic one nonetheless, as the final Vampire flight takes place over Nowra, escorted by four Skyhawk A4Gs. You can see a video of the event here.

Pilots needing refresher courses would fly the Vampires, also pilots not attached to squadrons in order to maintain their flying hours. The Vampires were used for navigation, instrument flying and search and rescue exercises too. Trainee ab initio pilots fresh from RAAF Flying School with Vampire experience would build-up their flying hours, adapting to naval methods and systems before converting to other aircraft.

In 1970 the RAN adopted the United States Navy (USN) prefixes for its FAA Squadrons. 724 Squadron became VC724 Squadron indicating it was a fixed-wing composite unit. By then, although the Vampires were well regarded and had a high percentage of serviceability, they were redundant. In late 1970 the changeover to the Macchi trainers took place.

The first RAN Vampire T.34 was delivered to NAS Nowra on Tuesday 08 June 1954. The last official Vampire flight was on Friday 02 October 1970, when Vampire A79-842 was flown by Commander Norman Lee, leading a formation of Skyhawk fighter bombers in a flypast over RANAS Nowra. Having served the RAN for 16-years the Vampires were replaced by the CAC Aemacchi MB-326H (Macchi jet) trainers in September 1970. During their time with the RAN four Vampires were lost in flying accidents, with the remainder being sold between 1970 and 72. The RAN Fleet Air Arm’s transition from the piston-era to the jet-age is due in no small measure to the part played by the DH Vampire T.34/T.34A and Sea Vampire T.22s trainers.