Related Heritage: The Douglas Dakota Articles
Back to Heritage Index 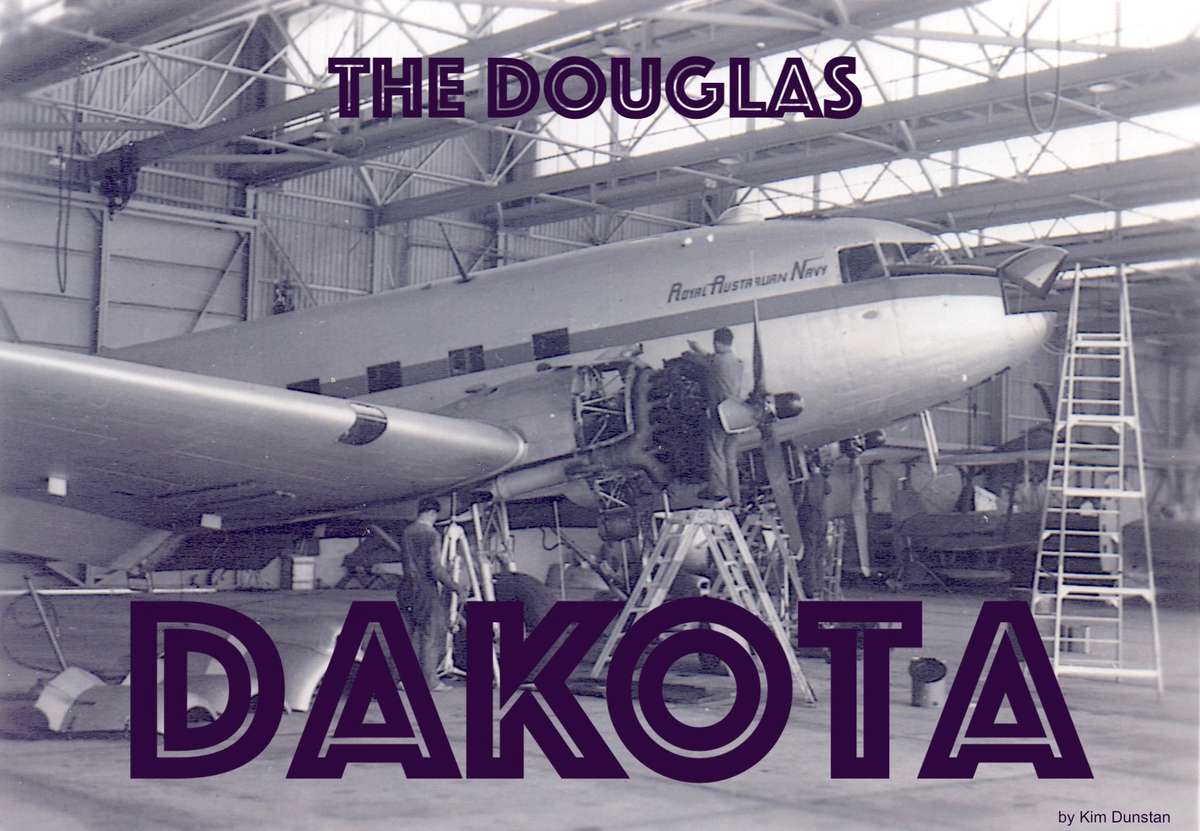 The Royal Australian Navy (RAN) operated four Douglas Dakotas between 1949 and 1974. These sturdy, reliable aircraft were the military version of the famous civilian DC-3. Based at HMAS Albatross, the Naval Air Station at Nowra, they served variously in 723, 851, 724 and 725 Squadrons performing various tasks including fleet requirements, VIP and general transport, Search and Rescue work and as flying classrooms for aircrew training. They were finally replaced in 1973 by two HS748.

When the government approved the formation of the RAN Fleet Air Arm (FAA) in July 1947, the plan involved the purchase of two Majestic class carriers, aircraft, and shore facilities. The major shore base at Nowra was an airfield previously used by the Royal Navy and RAAF during WW2. It was transferred to the RAN on 15 December 1947 and commissioned as HMAS Albatross on 31 August 1948. In May 1949 the first RAN Sea Furies and Fireflies arrived from the UK on HMAS Sydney and disembarked to NAS Nowra. In 1956 HMAS Melbourne delivered the Sea Venoms and Fairey Gannets.

By 1949 the renovation of the airfield at Nowra was progressing. A major priority was the establishment of training facilities for maintainers and aircrews, and the formation of second line squadrons. To assist training programs, a variety of de-listed RAAF aircraft were transferred to the RAN. This included two Dakota Mk 111 C-47A aircraft, surplus to RAAF requirements; A65-43 on 1 December 1949 and A65-23 on 11 April 1950. These land-based aircraft would play an important role in aircrew training, in particular navigation training. 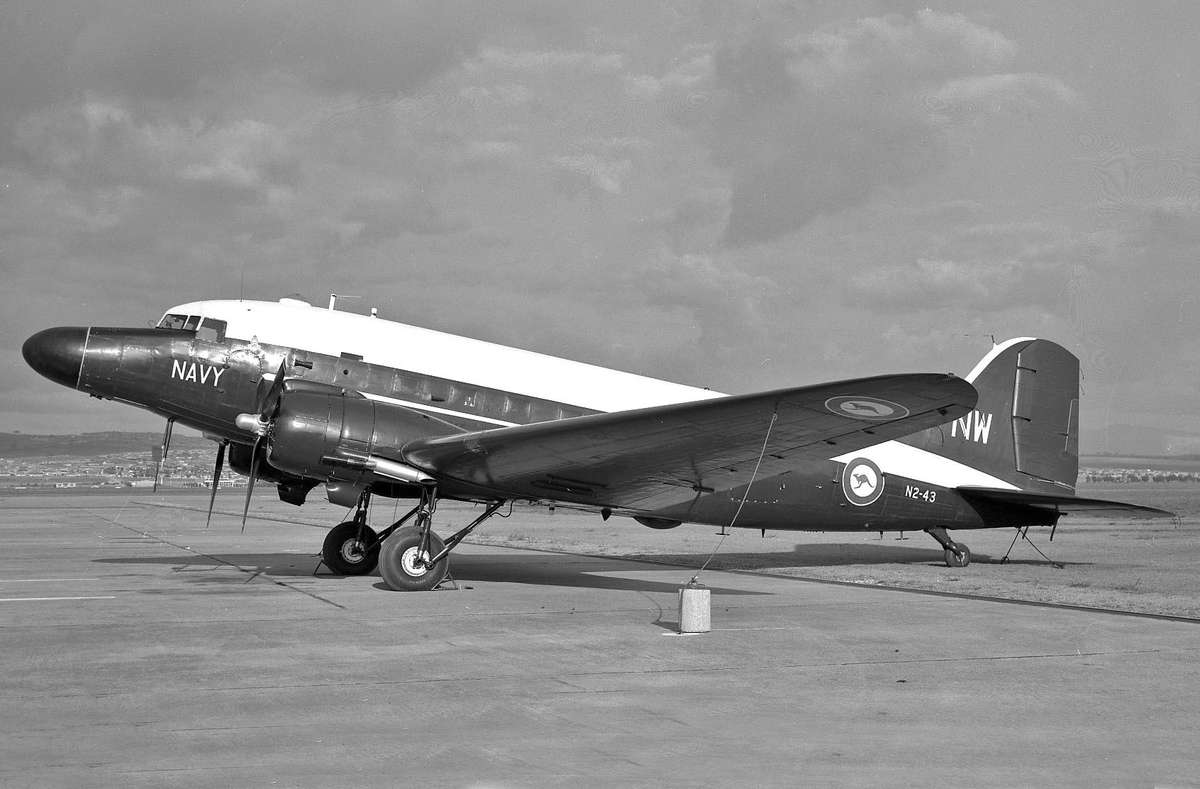 C-47 N2-43 at Parafield: A detailed side elevation of RAN Dakota N2-43 in Oxford Blue and white paint scheme taken at Parafield in May 1967, featuring the Sea Venom radome on the nose and the tip of the retracted Gannet radome in the ventral position. Photo Geoff Goodall collection.

The Flying Classroom. The Dakotas proved to be an ideal platform for navigation training as they could fly lengthy distances and cabin windows could be blacked-out. Aircrew under instruction would be engaged in rigorous day-and-night-time exercises, simulating lengthy flights over the ocean, developing the necessary skills required to fly from an aircraft carrier, complete a mission effectively and return safely. The FAA set a very high standard for aircrew training.

The first Dakota used as a flying classroom was A65-23, initially for navigation training and general transport. Later the cabin was modified with four stations for anti-submarine training including sonobuoy and ASV-19B radar instruction, communication and telegraphy exercises, and the use of a hand-held camera. Bomb racks under the wings carried sonar buoys and flares.

A65-43 was also modified along similar lines. When the DH Sea Venoms and Fairey Gannets arrived, both Dakotas had the Fairey Gannet type ASV-19B retractable (underbelly) radome installed. For aircraft interception training A65-43 had a Sea Venom AI-17 radar mounted on the cockpit nose. Both aircraft cabin interiors were modified extensively to house the classroom equipment.

By the time the first Dakotas were delivered, the RAN FAA had enlisted many former WW11 RAF, RAAF, RNZAF, and RN FAA pilots. Several of these had twin-engine experience, including those who had flown C-47 Dakotas. Pilots familiar with the Dakota were able to do refresher courses. Other RAN pilots who converted to the type were trained at the RAAF Central Flying School, at East Sale. However, some Dakota training was conducted at NAS Nowra; this included a number of the pilots who gained basic twin-engine experience on the Dakotas prior to being posted to the USA for Grumman Tracker training.

In 1968 two surplus Dakotas, A65-123 and A65-90, were transferred from the RAAF to the RAN, adopting N2-123 & N2-90 serials. The C-47A & C-47B Dakotas were similar to the civilian DC-3 but with numerous modifications. These included an astrodome in the cabin roof, a large cargo door, reinforced cabin floor, a 24-Volt power system, autopilot, and de-icing equipment. The RAN added Visual Aural Range (VAR) and Instrument Landing System (ILS) to civil aviation standards.

Apart from the flying classroom role, the RAN Dakotas were often called upon to assist with other duties such as flood and medical emergencies; wide-area SAR (search and rescue) operations along the south coast of NSW; duty SAR aircraft on weekends and holidays, including carrying a ‘G’ dropper containing a large life-raft; and escorting squadron aircraft on cross-country exercises. Other transport activities involved carrying dignitaries and VIPs including the Duke of Edinburgh and First Sea Lord Mountbatten during visits to Australia.

For example, in November 1956, ‘The Canberra Times’ reported that the Duke of Edinburgh flew from Canberra to HMAS Albatross in a RAN Dakota where he was welcomed by the Minister for the Navy, Mr Davidson, Rear Admiral Buchanan and Captain Fanshaw. The Duke toured the station inspecting facilities taking a special interest in the Australian Joint Anti-Submarine School (AJASS). He then flew by helicopter to HMAS Creswell at Jervis Bay, and returned to Canberra via Dakota from JB airfield. 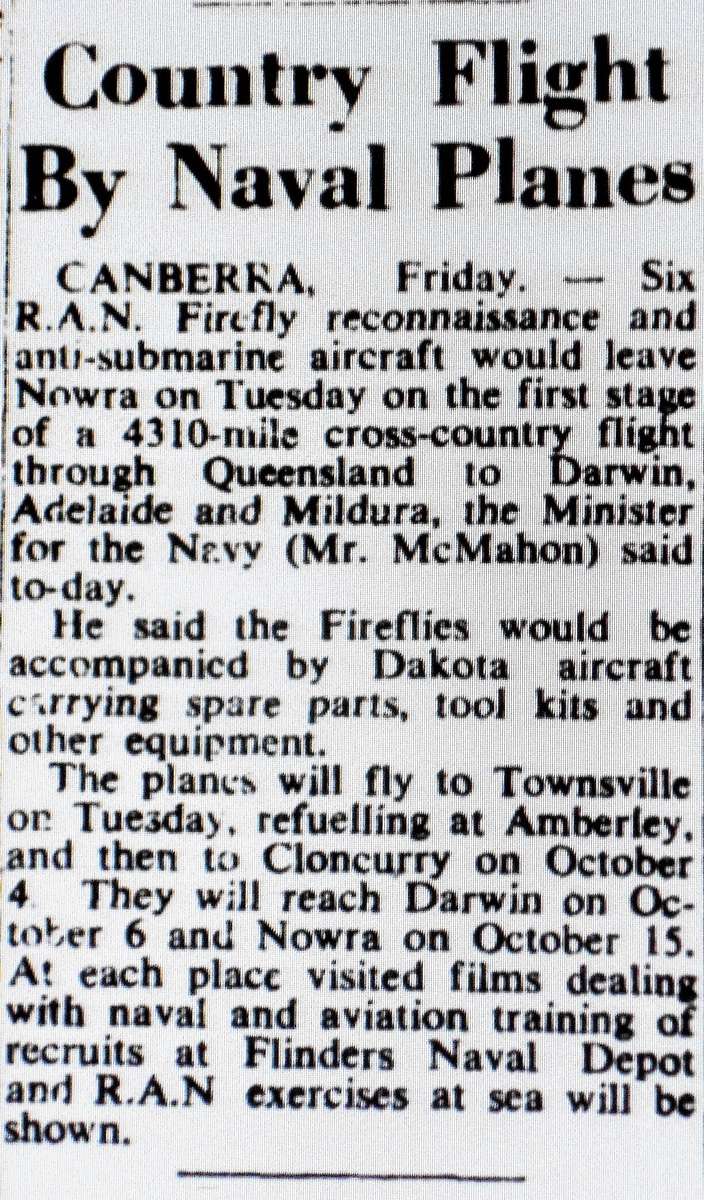 A newspaper article that mentions a Dakota escorted a flight of Fireflies on exercises that flew from Nowra to Darwin and return. Unfortunately the Dakota was delayed in Darwin with engine trouble.

In 1951, 816 Squadron Fairey Fireflies accompanied by a Dakota flew from Nowra via the east coast to Darwin, returning via Alice Springs and Adelaide. Unfortunately, the Dakota had engine trouble at Darwin which delayed its return to Nowra for some time.

‘The Barrier Miner’ on 10 October 1952 reported that eight RAN Sea Furies from 808 Squadron arrived at Broken Hill aerodrome – about two and a half hours after leaving Sydney; Broken Hill being the first stop on a long-distance flight to Perth. A Dakota back-up aircraft also accompanied the aircraft on the cross-country flight. In all about 20 men were engaged in the exercise. Later, four of the Sea Furies landed on HMAS Sydney,near Rottnest Island, off the West Australian coast.

In an unusual emergency assistance case ‘The Sydney Morning Herald,’ of 9 Aug 1952, reported that a RAN Dakota parachuted food supplies to lighthouse keepers and their families on Montague Island off the NSW south coast – bad weather had prevented a supply launch from reaching the island for more than two weeks and food was running short. Mr Hughie the lighthouse keeper radioed thanks to the Dakota crew.

At Narrabri, NSW, during the 1955 Hunter Valley floods, two RAN Dakota aircraft assisted in evacuating sick children from the region. The Dakotas were also engaged in transporting food and medical supplies – and fuel for the RAN Sycamore helicopters that were operating in the region during the emergency.

A confidential Dakota deployment in the early 1960s involved the lengthy detachment of 723 Squadron aircrew and maintenance personnel to Wommera Rocket Range, in South Australia, where the Dakota acted as a flying testbed during the development trials for the Ikara ASW weapon system – making extensive use of the Dakota to track the Ikara Missile.

By the mid-1960s the aging Dakotas were becoming redundant, yet they continued to render useful service into the early 1970s. But with the arrival of the new fixed wing A4G Skyhawks, Grumman Trackers and helicopters, together with the enormous changes in technology, the need for replacement aircraft was pressing. In 1973 the Dakotas were superseded by two Hawker Siddeley turboprop HS748 aircraft delivered to VC851 Squadron – adopting the role of navigation and electronic warfare training aircraft – and assisting with general transport duties.

The venerable Dakotas served the RAN for 25-years, covering a wide range of duties, operating variously with 723, 851, 724 and 725 Squadrons. Away from the limelight and publicity they were the quiet achievers. The Dakotas made a major contribution towards aircrew training and remain one of the longest serving aircraft to operate in the RAN FAA.