The RAN’s C47 Dakotas have the distinction of being one of the few types where all aircraft were at least ‘second hand’ when they entered RAN service rather than new, and their delivery was spread over some nineteen years. The first airframe A65-43 was handed to the RAN in 1949 to become a training platform for Naval Observers, followed by A65-23 some 5 months later. In 1968 the A65 prefix was changed to N2 for all RAN Dakotas. The remaining two (N2-90 and N2-123) were also delivered in 1968.  All were ex-RAAF airframes surplus to requirements.

Left. All of Navy’s Dakotas had a life before the RAN, and A65-43 (N2-43 in RAN service) was no exception, having been acquired from the USA in early 1944.  The photo shows it fitted with spray-boom equipment, which occurred in October 1947 for Mosquito control – a mixture of DDT and Diesel was deployed – clearly environmental standards were different then!  The record notes the aircraft was damaged on 01Mar48 when the starboard mainplane struck a tree during spraying at Finschafen, PNG.  It appears to have been destined then for QANTAS but was instead inspected by the RAN Fleet Air Arm on 05 July 1949, and was transferred to the FAA free of charge on 30 November of that year. See here for early Record Card.

A65-23 (N2-23 in RAN service) had a similar background, being acquired from the States in December of 1943. After installing Twin Row Wasp engines the aircraft was allocated to 36 Squadron where the image on the left was taken some time in 1944 (via Mike Mirovic). It was issued to the RAN Fleet Air Arm on 06Apr50 free of charge from 1AD Tocumwal, which was commanded at the time by the father of Norman Lee, who was later to reach the rank of Commodore RAN after a distinguished career in the Fleet Air Arm including Service flying Fireflys in North Korea.

A note on the records of N2-23 and N2-43 indicates they were re-allocated civilian registrations of VH-ORB and VH-ORA respectively when they were transferred to the RAN, even though military aircraft. Perhaps there was no ‘military register’ at the time?  Pilots noted these numbers in their flying log books, and maintenance staff referred to the two aircraft as ORA and ORB, so they were key identifiers.

Below:  A cutaway drawing of a C47 Dakota (courtesy Mike Badrocke), showing the solid airframe architecture that was to make this aircraft so strong and versatile.  The first model took to the air on 17 December 1935, 32 years to the day after the Wright Brothers’ historic flight at Kitty Hawk, North Carolina.  It entered commercial service in the US and revolutionised air travel.  It was WW2, however, that cemented the aircraft’s reputation as a ‘go anywhere, do anything’ aircraft –  a reputation that was to last for over 80 years of service. 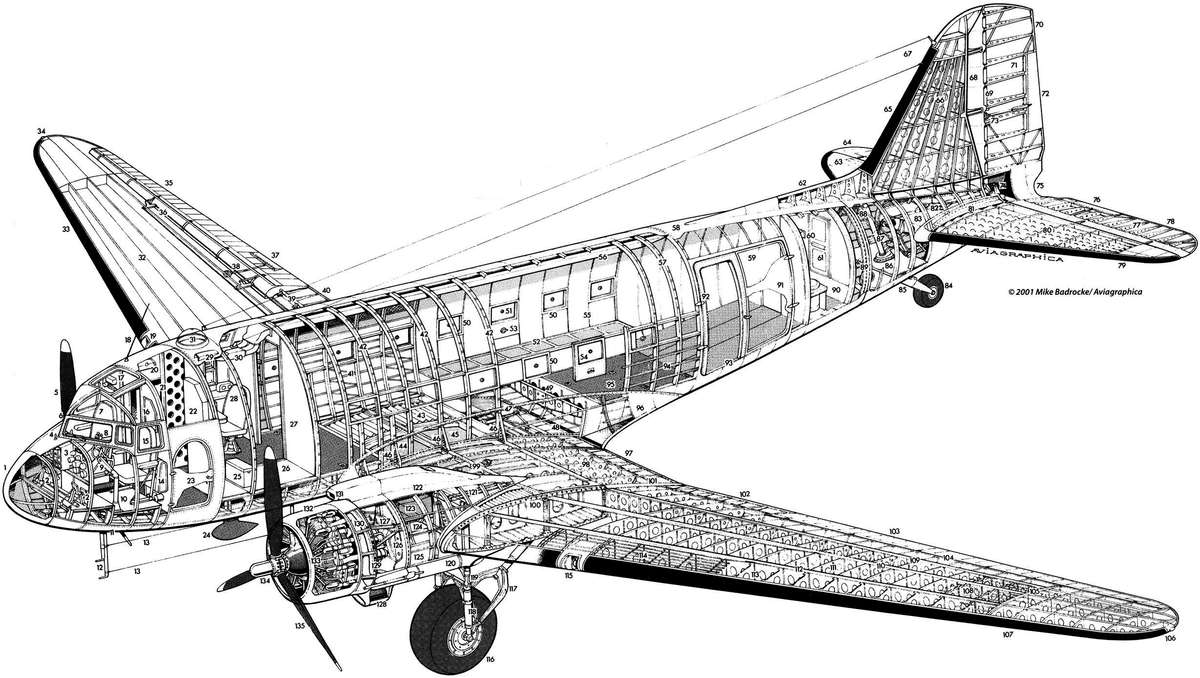 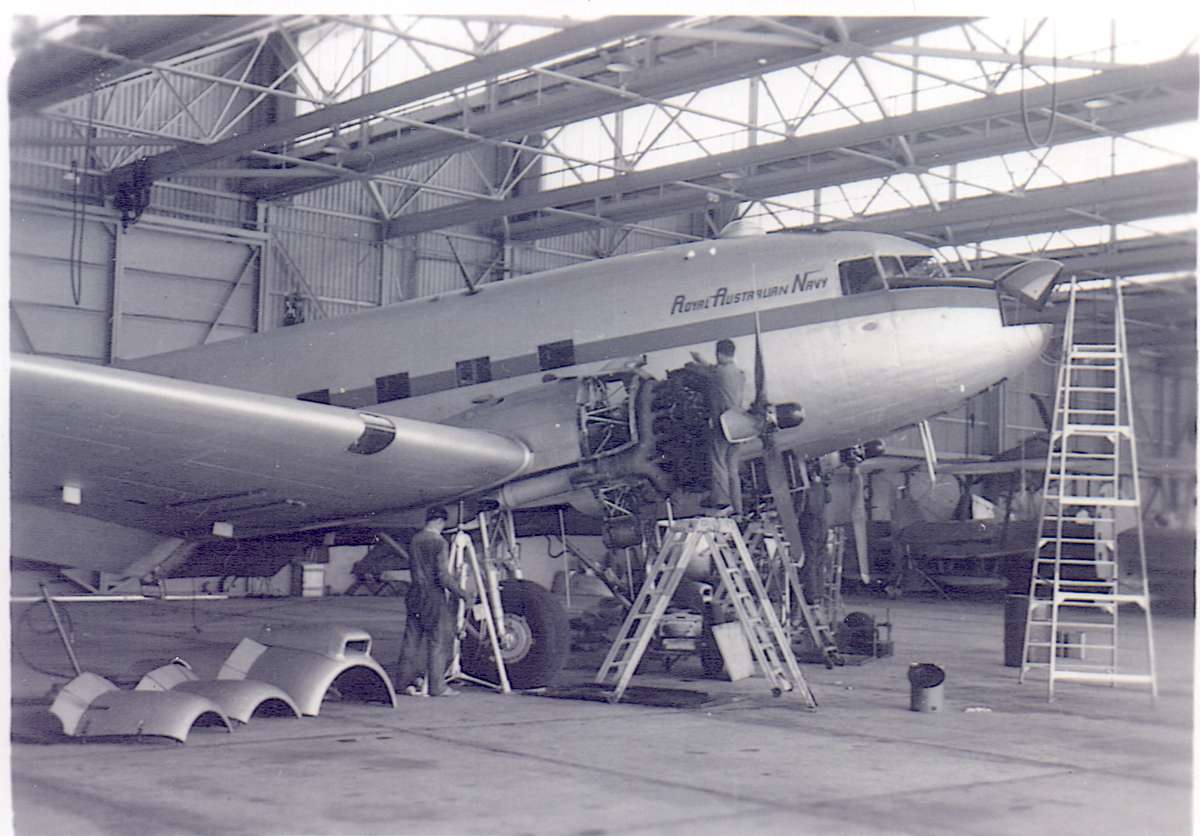 x
Above.  The “RAN” markings on the aircraft and the Sea Otter in the background bracket the date of this photograph between 1950 and 1954, so the airframe shown would most probably have been N2-23  or N2-43.  Both survived to old age, as did the hangar which was to last another fifty years or so.  In the photo NA Ward and PO Keeley conduct maintenance. (FAAM)

Right. The caption for this photo is: ‘An image of the training stations in A65-23.’ Both N2-23 and N2-43 were converted this way (see below). The stations were for training Observers and Telegraphists doing navigation and anti- submarine warfare (ASW) exercises, operating the sonobuoy and radar equipment. Of the eight seats six were for trainees and two for instructors. The modifications also included sonobuoy racks under the wings and a half-door allowing use of a hand-held camera. 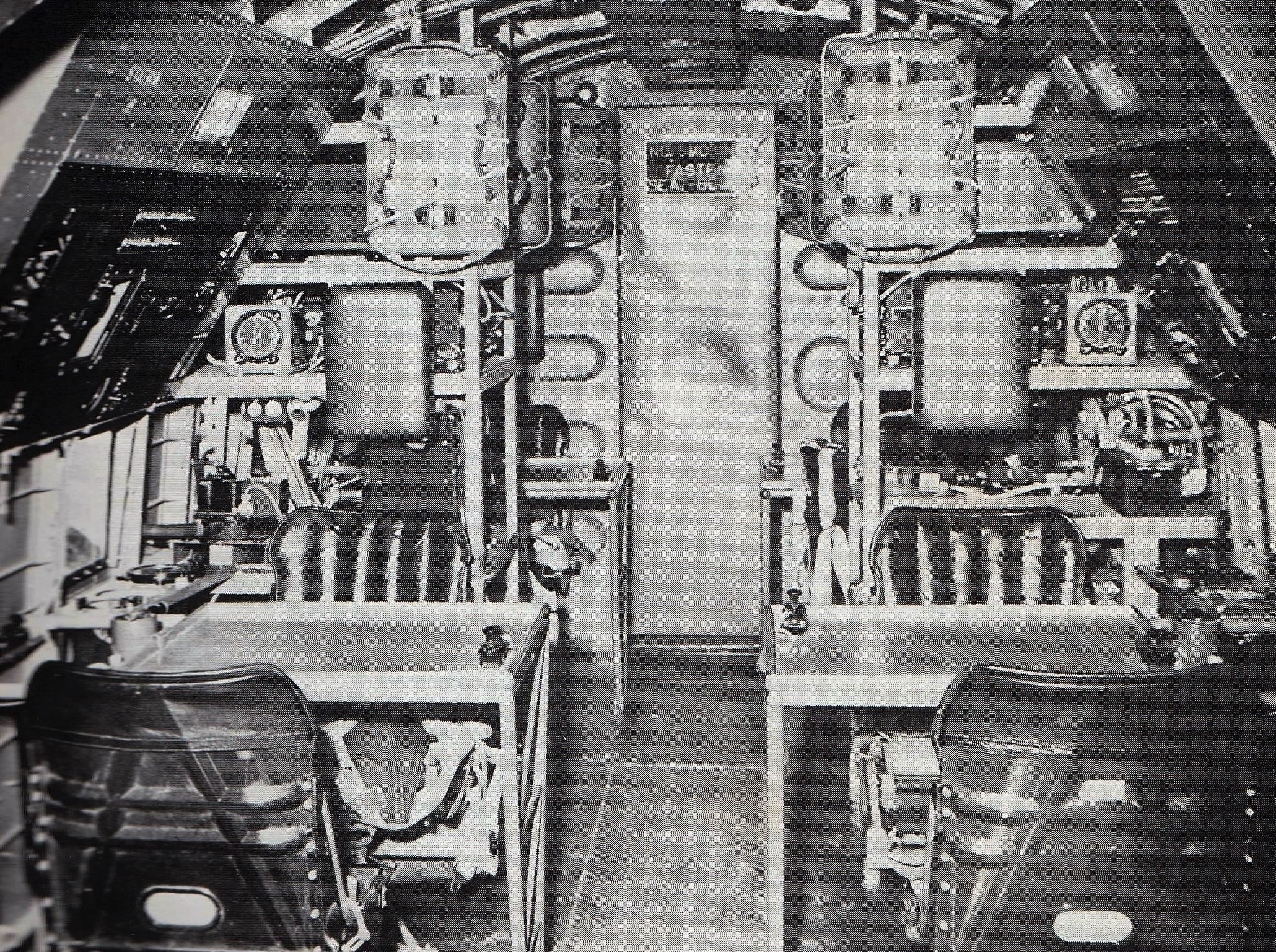 Below. The second pair of Dakotas were transferred to the RAN in the late 60’s.  Pictured left is A65-90 during the Royal Tour of 1954, when the aircraft was still in RAAF hands (photo Ken Bowles).  It was handed to the RAN on 14Feb68 and reserialled as N2-90 nine days later with just over six thousand flying hours on its books.  It was withdrawn from service in April 1974 and was then used for Apprentice Training at Schofields before being handed to the RAN Historic Flight in 1985.    A65-123 was transferred to the RAN a week later (on 21Feb68), with 5128 flying hours logged.  The right hand photo below shows it outside RAAF Pearce, when it was also being used for the same Royal Tour. 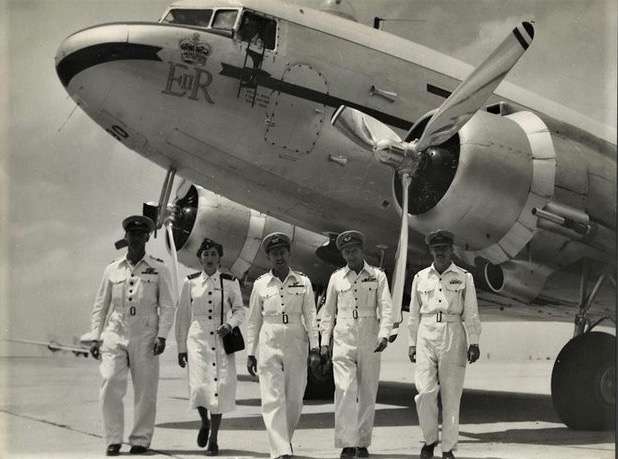 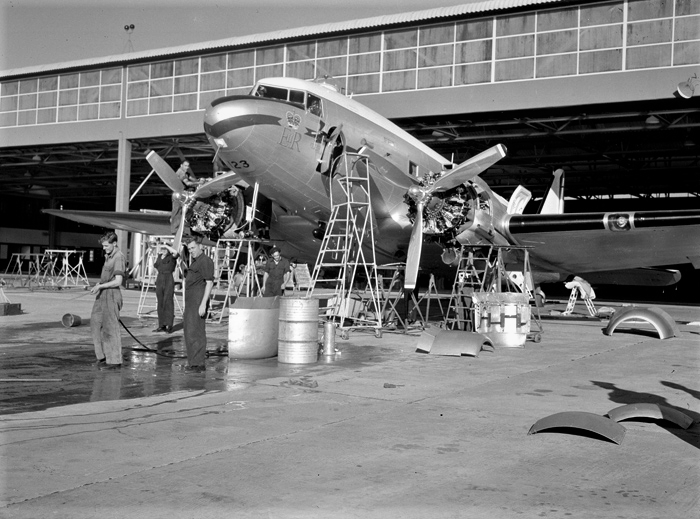 In very early years the moniker “Royal Australian Navy” was adjacent to the cockpit as per the image above. It then moved to aft of the cockpit windows, and finally to a broader position along the fuselage (right). The initial silver/white livery later gave way to a midnight blue with white upper fuselage on some aircraft. 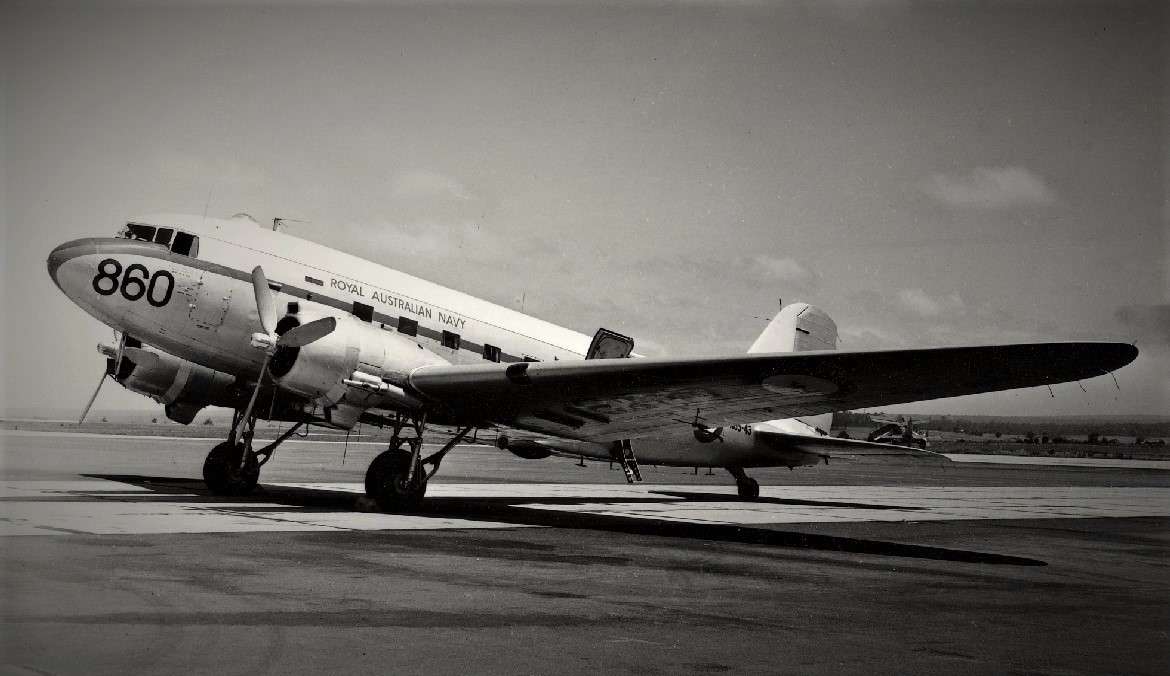 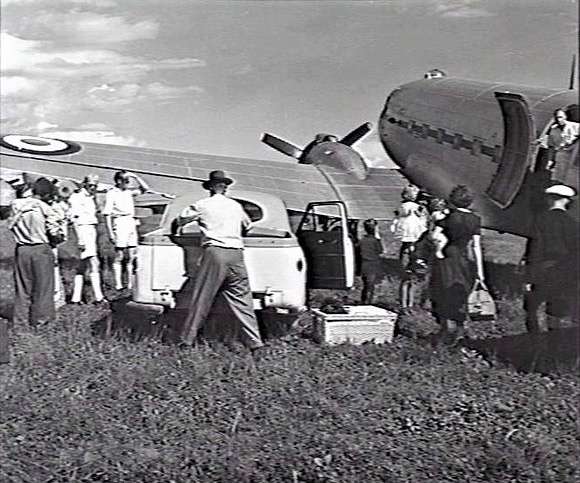 Left.  Although acquired primarily for aircrew training, the Dakota invariably reverted to its core role – general transport – when the going got tough.  Such an occasion occurred during early 1955 with widespread floods near Narrabri, where this aircraft was pictured evacuating children at risk of sickness. (AWM 304700).  The Fleet Air Arm was to play a pivotal role in flood relief – you can read more about it here.

Below: Shortly after the arrival of the Sea Venom and Gannet aircraft (which first arrived onshore in 1956 to replace the FAA’s first generation Sea Fury and Firefly), both -23 and -43 were modified by adding a retractable Gannet radome in the belly of the aircraft for Observer/TACCO training. It can be seen in the photo below in the extended position although it would normally have been raised for landing.  N2-43 was also fitted with a Sea Venom radar in a distinctive extended ‘snoot’ – the only Dakota to be so modified.   It was sometime referred to as “The Queer Dakota”. 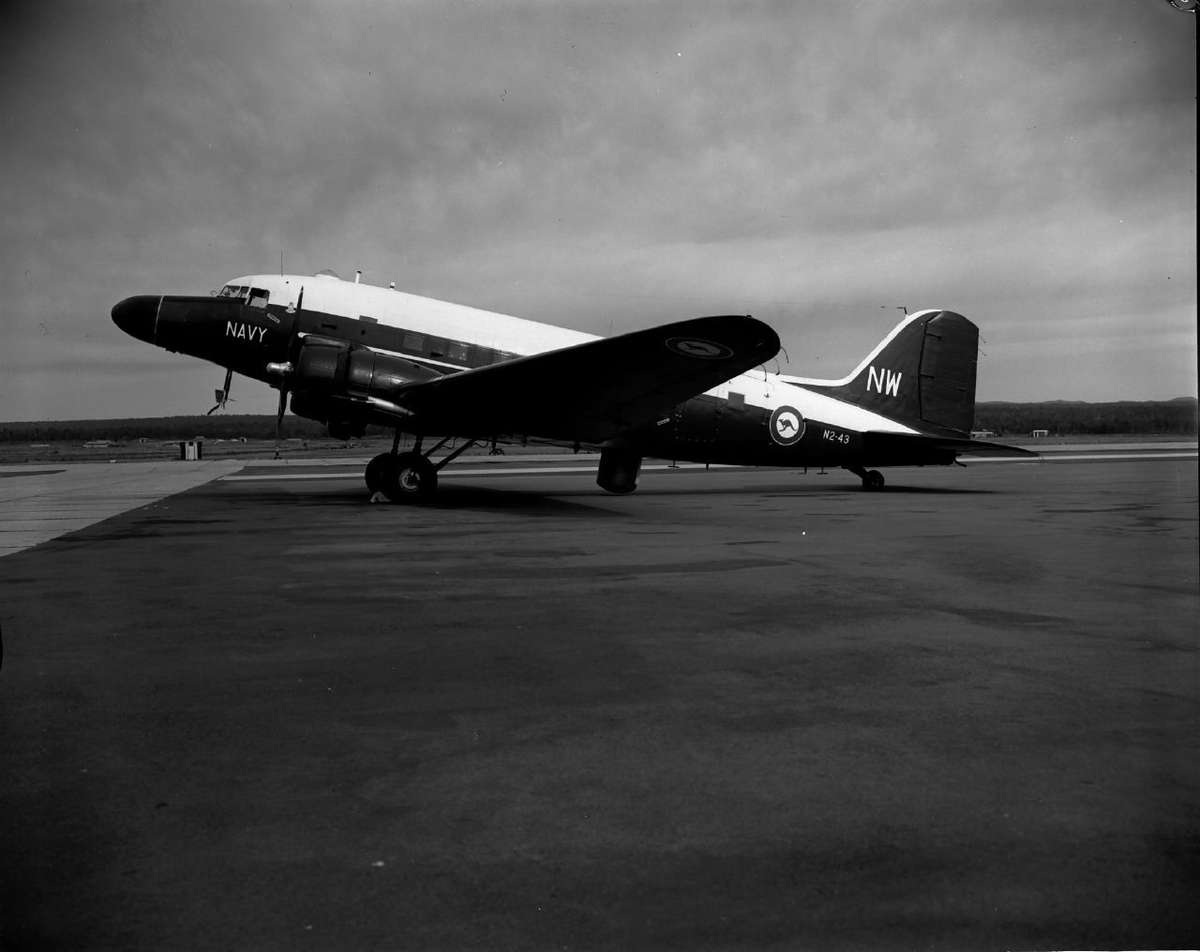 Below: Having survived the Sea Venom/Gannet era, the Dakota soldiered on to be a flying companion to the FAA’s third generation aircraft, the Grumman Tracker and, from the same stable as itself, the McDonnell-Douglas A4G Skyhawk. The newspaper cutting below captures a moment when the three types got together (Navy News 16Aug68). 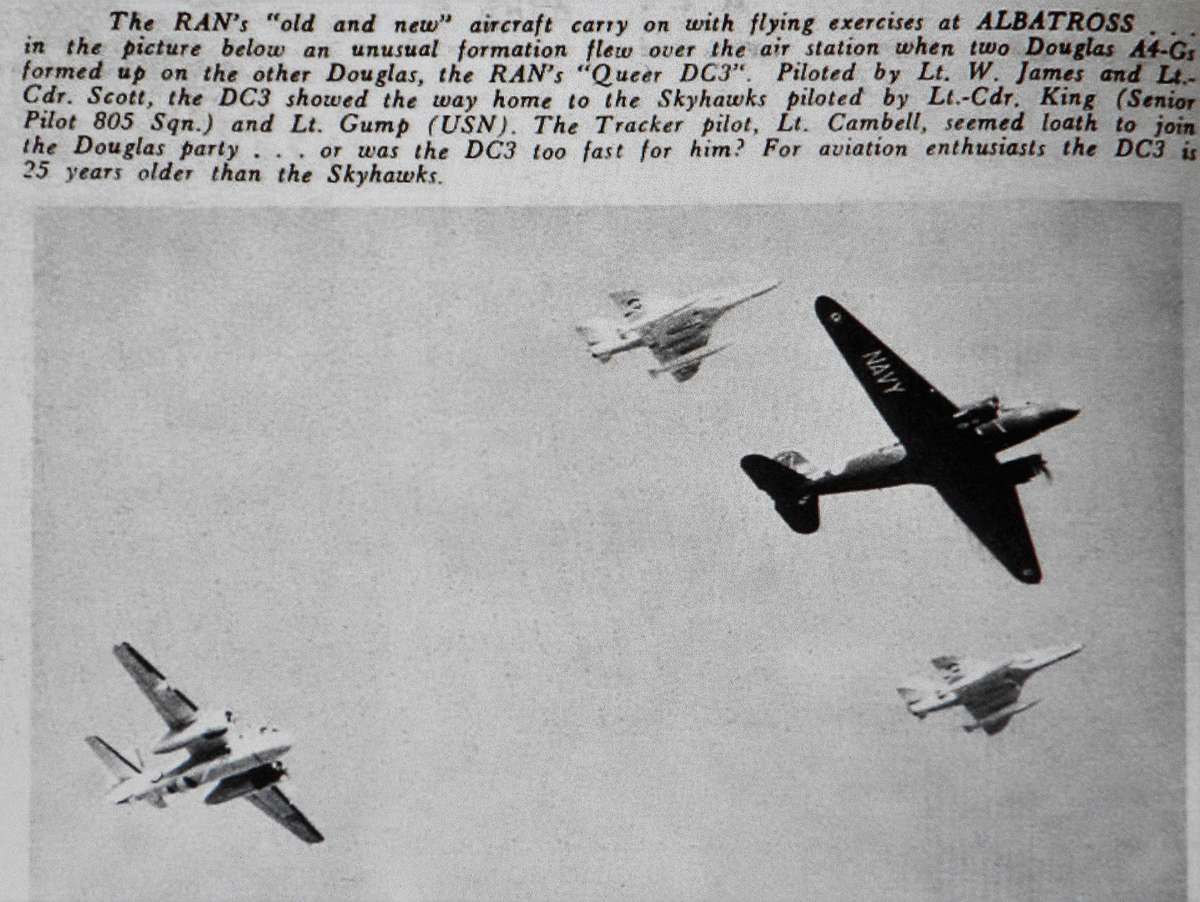 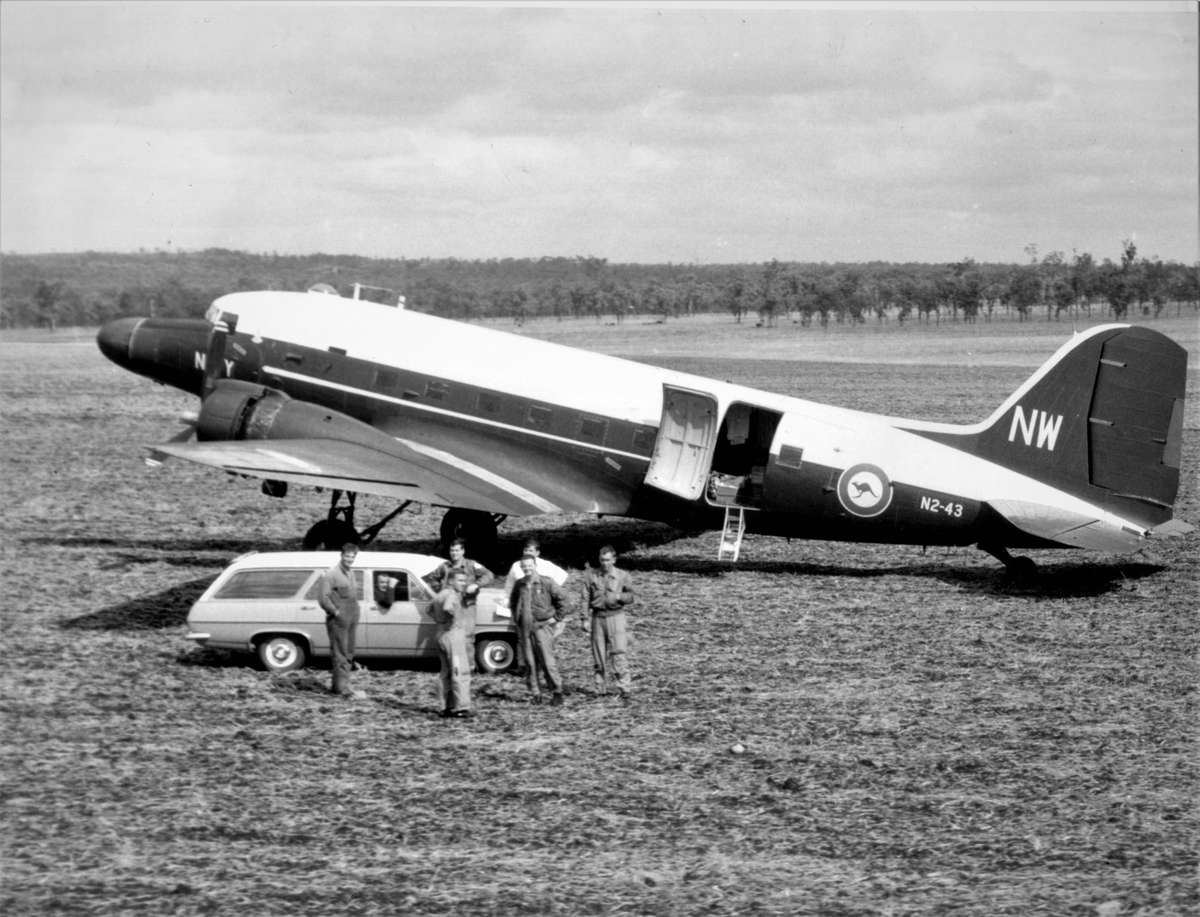 Left.  Another view of N2-43 with its elongated nose, this time in a paddock in southern Queensland after making a forced landing.  The circumstances are not known but the left hand prop is feathered, suggesting either an engine failure, or at least a malfunction of it sufficient to put down in a field.

Below: The cockpit of N2-90 in early 2019, after it had been purchased by the Historic Aircraft Restoration Society (HARS) by auction.  Although it had been airworthy for most of its time on the RAN Historic Flight (HF), the aircraft was left out in the weather for many years after the Flight ceased operations in 2004 (see more below).  Although the image is of poor quality it gives a good impression of the neat and well ordered layout of the controls and instruments, notwithstanding they are rudimentary by today’s standards.   Photos: HARS. 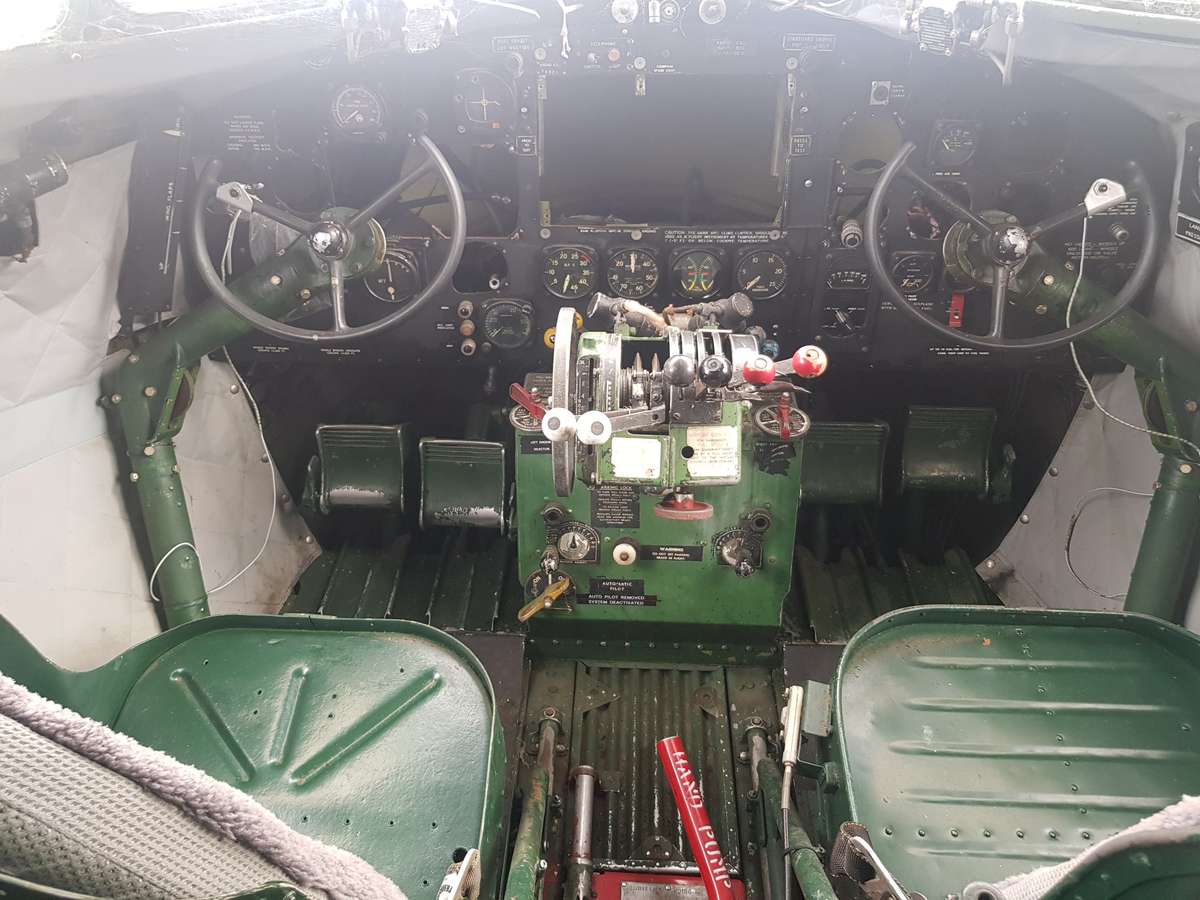 Farewell to the Dakotas

The collation page below by Phil Thompson captures a Navy News November 1973 article, stating that the final three RAN Dakotas had been paid off.  The article is somewhat at odds with the record, however, which shows that N2-90 (one of the aircraft pictured in the article) had been withdrawn in 1970, whilst the others were withdrawn from service around 1973.   Notwithstanding, after many years of faithful service the venerable Dakotas were removed from the Flight Line, being replaced by the newer, faster and more efficient gas-turbined HS748s newly arrived from the UK in mid 1973. 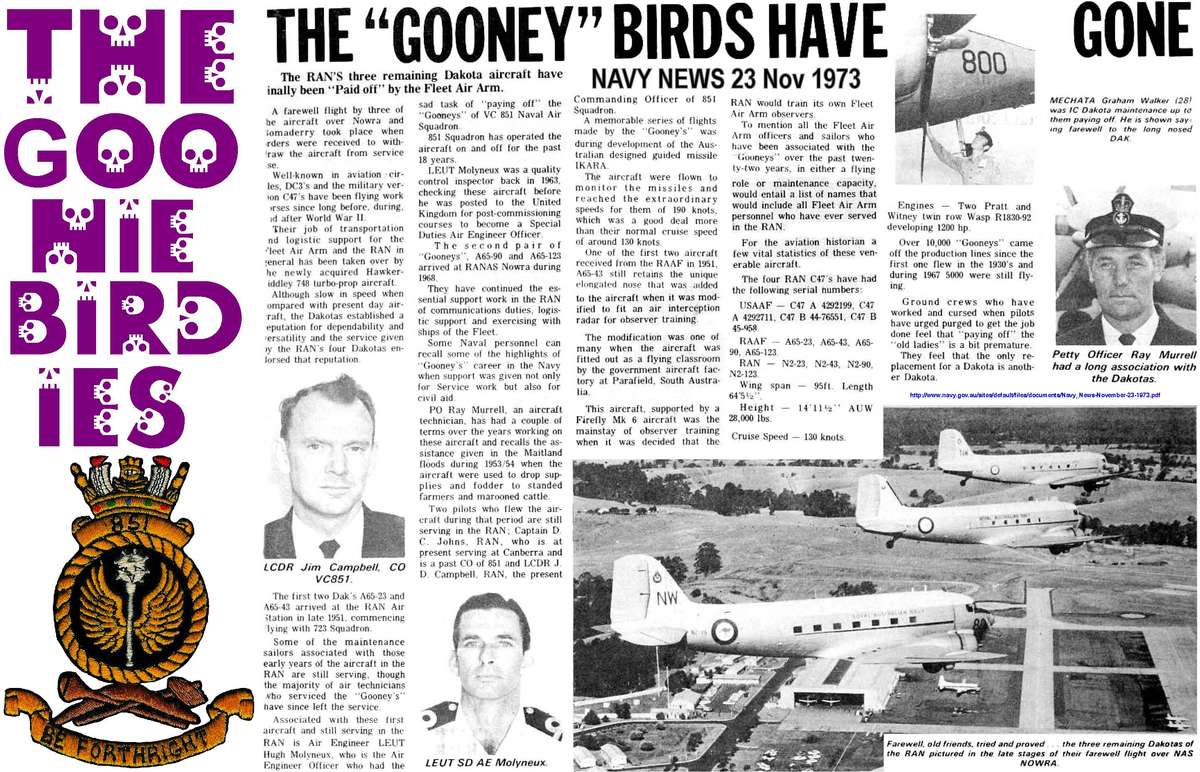 Right.  N2-43 with its distinctive profile was assigned to the Fleet Air Arm Museum in 1976 and in its previous silver livery, now occupies pride of place hanging above other exhibits on the museum’s floor.  It was the luckiest of the four in terms of preservation.

N2-123 was withdrawn from Service in October 1973 and sold to a buyer in the United States in June of the following year. It’s fate is unknown.

N2-23 was withdrawn in August 74 and languished for three years before being purchased by Masling Airlines of Cootamundra. It was eventually erected on a pole at West Wylong in 1983, bearing its original RAAF registration of A65-23.

N2-90, after being used for apprentice training at Schofields, was allocated to the RAN Historic Flight at HMAS Albatross in 1985, re-registered as VH-NVZ. 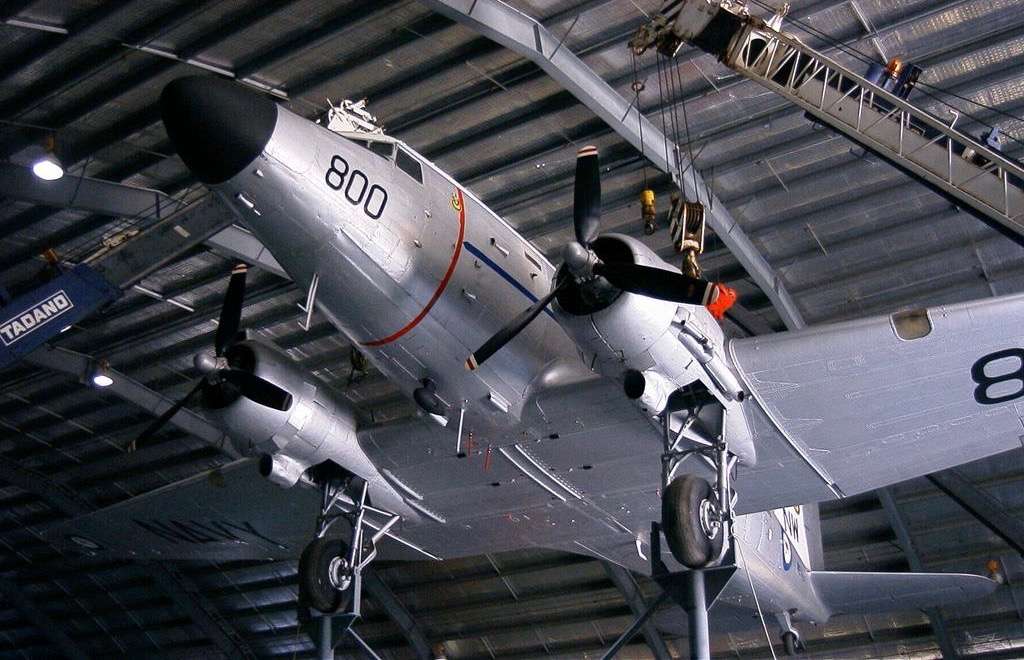 Restored to pristine condition (photos right) it continued to fly until the HF was disbanded around 2004.  Regrettably the air station demonstrated  little appetite for the preservation of its heritage as the airframe was pushed out into the weather where it gradually deteriorated for over a decade.  In late 2018 it was purchased by the Historic Aircraft Restoration Society (HARS) as part of a wider job-lot and is undergoing assessment to determine if it can be returned to flying condition. 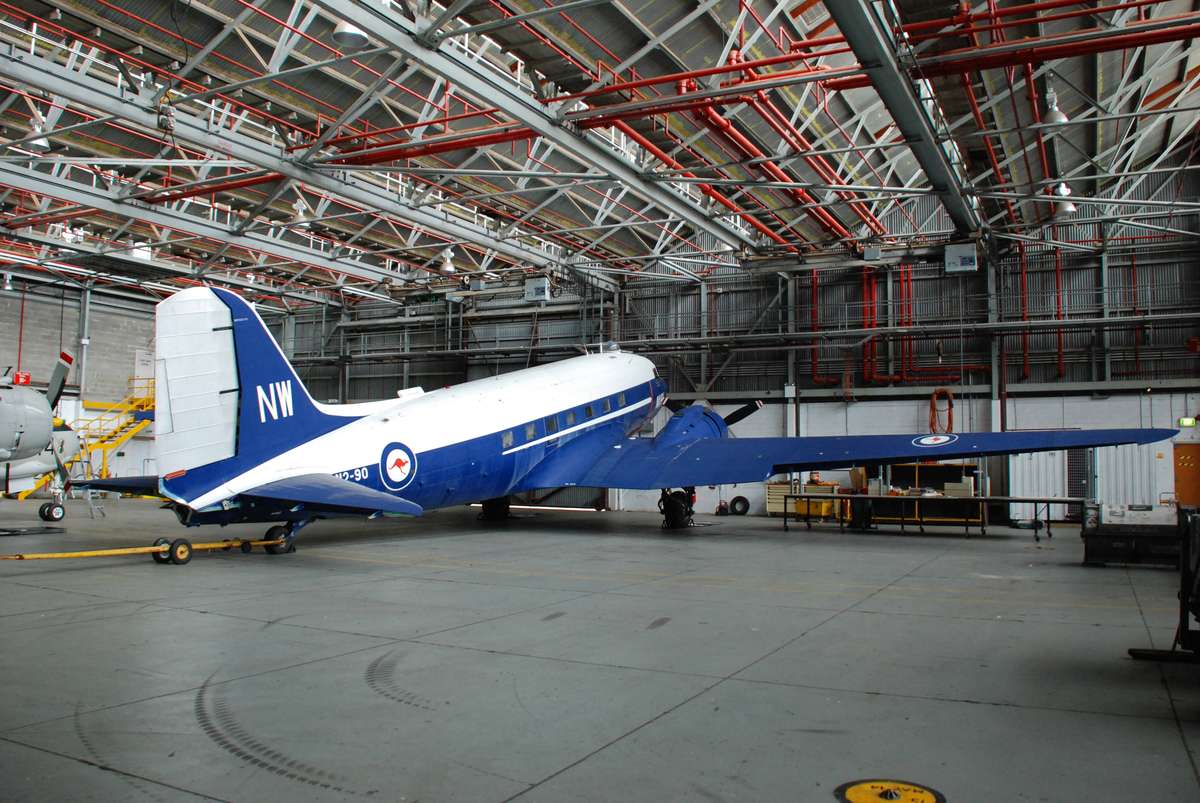 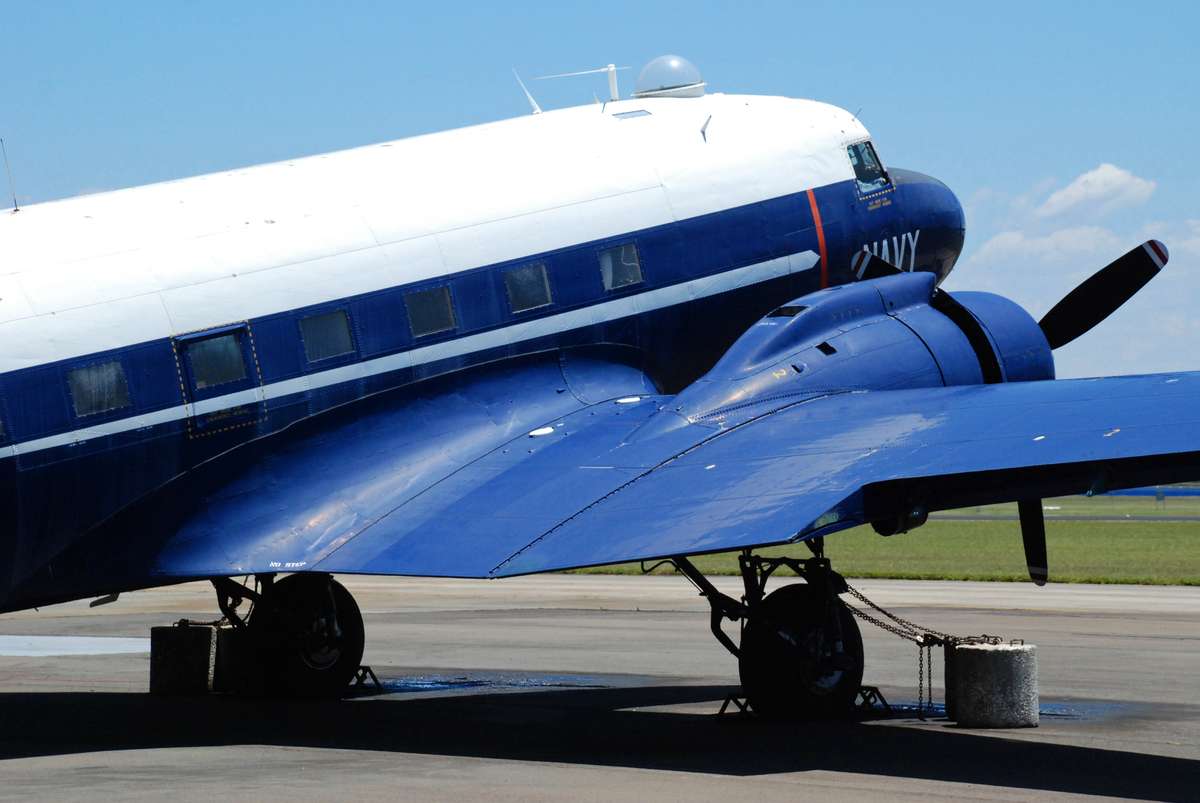 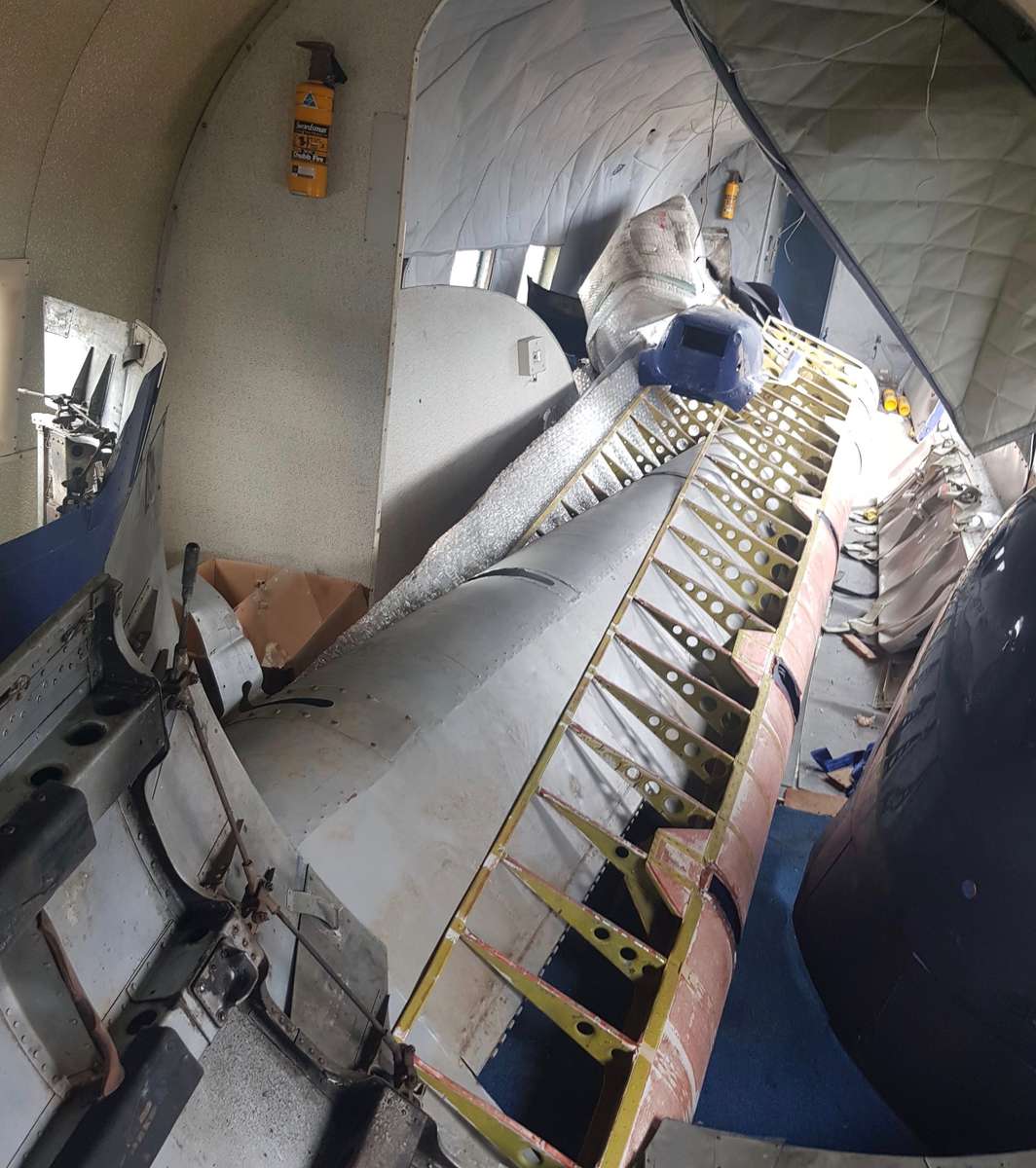