Ronald James Leeson was born on 28 April 1931 at Fawkner, Vic. He enlisted in the Royal Australian Navy for 12 years, at Melbourne on 5 October 1948. He joined as a Recruit Naval Airman (A) and was drafted to HMAS Cerberus (FND), south of Melbourne, to begin his basic naval training and to be assessed for Aircrew training. Having completed the course on 5 January 1949, Leeson was rated Provisional Naval Airman (Pilot).

On 28 February 1949 he was transferred to RAAF Point Cook to begin an Elementary Flying Course and afterwards joined the Flight Training School for basic training on the Link Trainer; then flying DH 82 Tiger Moths before progressing to the more powerful single-engine Wirraway trainer.

By 12 August 1950 Leeson had graduated from Point Cook and gained his ’wings’. At Cerberus, on 3 September, while attending a short Divisional Course he was promoted Acting Sub Lieutenant (P-IV). After taking leave Leeson was posted to the UK for advanced training with the Royal Navy Fleet Air Arm.

On 20 September 1950 he embarked on RMS Orontes at Melbourne for passage to the UK. Upon arrival he was drafted to HMS Fulmar (RNAS Lossiemouth) in Scotland, arriving on 25 October 1950, to take part in an Operational Flying School (Part 1) ‘strike’ course. This involved converting to naval aircraft; navigation exercises, night flying, weapons training, and landing on a seagoing aircraft carrier.

On 31 January 1951 he posted to HMS Gannet (RNAS Eglington) Northern Ireland, for an Operational Flying School (Part 2) anti-submarine course. The Fairey Firefly (with pilot and observer) was the main ASW aircraft and the course focussed on long range navigation patrols over the ocean, exercising with fleet units, radar training, and other activities. The course ran for three months covering the details of anti-submarine warfare.

Further training took place at HMS Heron (RNAS Yeovilton, Somerset) during May 1951, with land based dummy deck landings in preparation for carrier deck landing and catapult qualifications at sea. On completion Leeson was posted to RN Barracks at Portsmouth, on 18 June 1951, where he attended an Officers Divisional Training Course. Having completed his training he then embarked on RMS Strathmore on 5 July 1951, for the return passage for Australia.

Leeson arrived at HMAS Albatross (RANAS Nowra), on 19 August 1951, reporting for flying duties with 816 Squadron. The squadron was equipped with Fairey Fireflies, and formed part of the 20th Carrier Air Group (20th CAG). On 3 September 1951, Leeson was confirmed a Sub Lieutenant (P) and was posted to HMAS Cerberus on 31 March 1952, to attend a Short Service Officers Course, returning to Nowra where he continued to exercise with 816 Squadron.

On 3 August 1952, Leeson was promoted to Lieutenant (P). Then on 11 August, 816 Squadron embarked on HMAS Sydney (111) for a ‘Mystery Cruise’ sailing north via the Solomon Islands and Manus Island to Darwin. In early October Sydney positioned at the Monte Bello Islands for the Atomic Bomb tests where 816 did patrol duties; Sydney then sailed via Fremantle and Melbourne, at Jervis Bay disembarking 816 to RANAS Nowra on 10 November 1952.

On 12 January 1953, 816 Squadron re-embarked on Sydney for ‘work-up’ exercises along the NSW South Coast, visiting Hobart for the regatta before disembarking to RANAS Nowra on 27 February. Leeson continued to exercise with 816 at Nowra until 23 June 1953 when 816 embarked on the carrier HMAS Vengeance (1) to work-up in preparation for deployment for Korea. 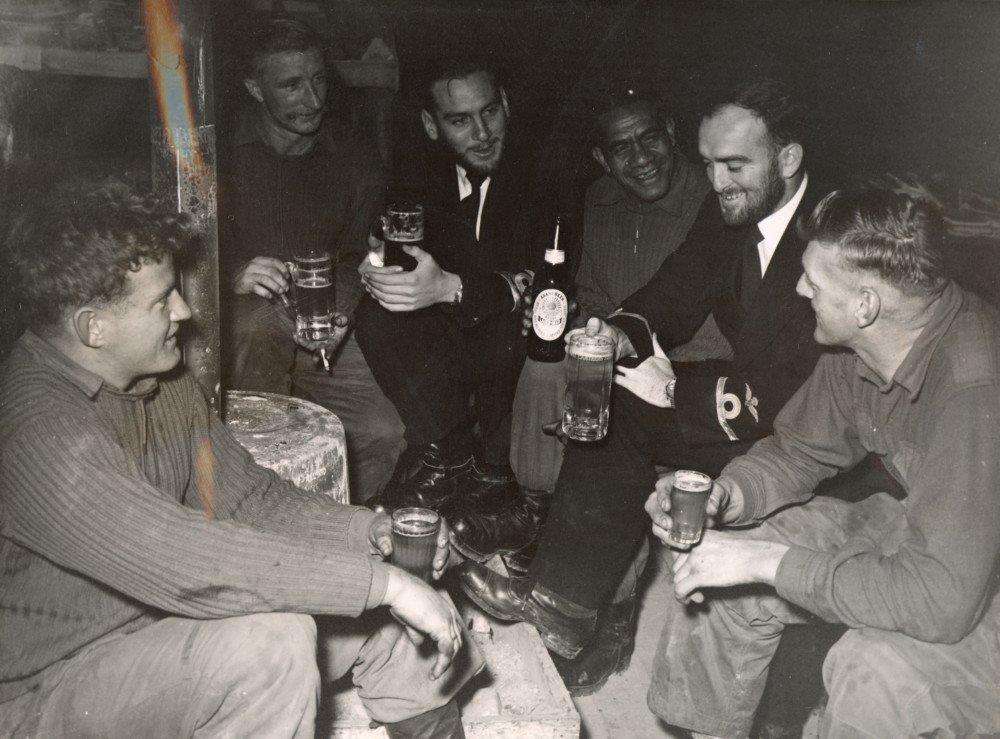 LEUT Leeson (left) and Seamus (Jim) O’Farrell (right) take a little time out to talk to some Diggers during their Korean deployment. With them was Privates Alf Jones, Laurie Woods, Dick Hill, and Athol Wilson.

Because Vengeance needed repairs, her Korea deployment was re-assigned to HMAS Sydney.  On 21 September 1953, 816 Squadron re-embarked on Sydney. After a short ‘work-up’ at Hervey Bay, on 1 October, Sydney sailed from Port Jackson, via Fremantle and SE Asia, for Korea.  [On route, Leeson requested a transfer from a Short-term to a Permanent Commission, which was granted on 1 November 1953]. Sydney completed her Korean tour of duty on 4 May 1954, returning to Australia via SE Asia, disembarking the squadrons to RANAS Nowra in June 1954.

On 29 August 1954, Leeson transferred to 851 Squadron, a training unit. Later in the year he was selected for a Landing Signals Officer’s (LSO) course in the UK. On 3 January 1955 he boarded a military aircraft for passage to England, joining 767 Squadron at HMS Blackcap (RNAS Stretton). On 10 January 1955, he joined the No 38 LSO Course, which finished at the end of March. Leeson returned to Australia by air arriving in Sydney on 25 March 1955; taking-up LSO duties on HMAS Sydney.

After a several weeks duty on HMAS Sydney, on 23 April 1955, Leeson returned to RANAS Nowra where he joined 805 Squadron flying Sea Fury aircraft. On Thursday 21 July 1955, on a routine flight from RANAS Nowra, Lieutenant (P) Ronald James Leeson RAN, was killed when his Hawker Sea Fury WZ644 crashed near Jervis Bay.  The 805 Squadron Diary recorded the following details for that day:

“At about 1045 the CO and Lieut. Leeson took off for an hour of cloud flying and QGHs, and during their absence the weather closed in considerably. At noon the CO returned overhead but no word had been received from Lieut Leeson and at 1230 he still had not shown up.  The CO was vectored out to search for him, but to no avail so the Air Sea Rescue Organisation was alerted and all aircrew placed at immediate readiness. Three helicopters were airborne at 1245, searching the beaches between Moruya and Kiama, and a Firefly with G-dropper fitted was put at immediate readiness. These all returned to base with no word of the mission 101, so 851 Squadron’s serviceable Fireflies were scrambled and sent on a search extending 40 miles to sea while the Dakota made a more extensive search to 60 miles.  When the telephone exchanges were being alerted, information of an explosion heard near Currarong in the direction of the Drum and Drumsticks was gathered, and following an investigation by a helicopter (Lieut McMillan and the CO) the wreckage of 101 was discovered about 80 yards from the cliffs and approx 1.5 miles from Currarong.  The aircraft had evidently disintegrated on impact, and Lieut. Leeson was killed instantly. This tragic episode came as a severe jolt to the Squadron as a whole, for he was a true friend to all who knew him –  an efficient officer whose happy disposition will be sadly missed by all in the squadron, and the navy.”

LEUT Leeson was laid to rest in Nowra Cemetery on the afternoon of Saturday 23 July 1955, at a funeral attended by his Squadron. 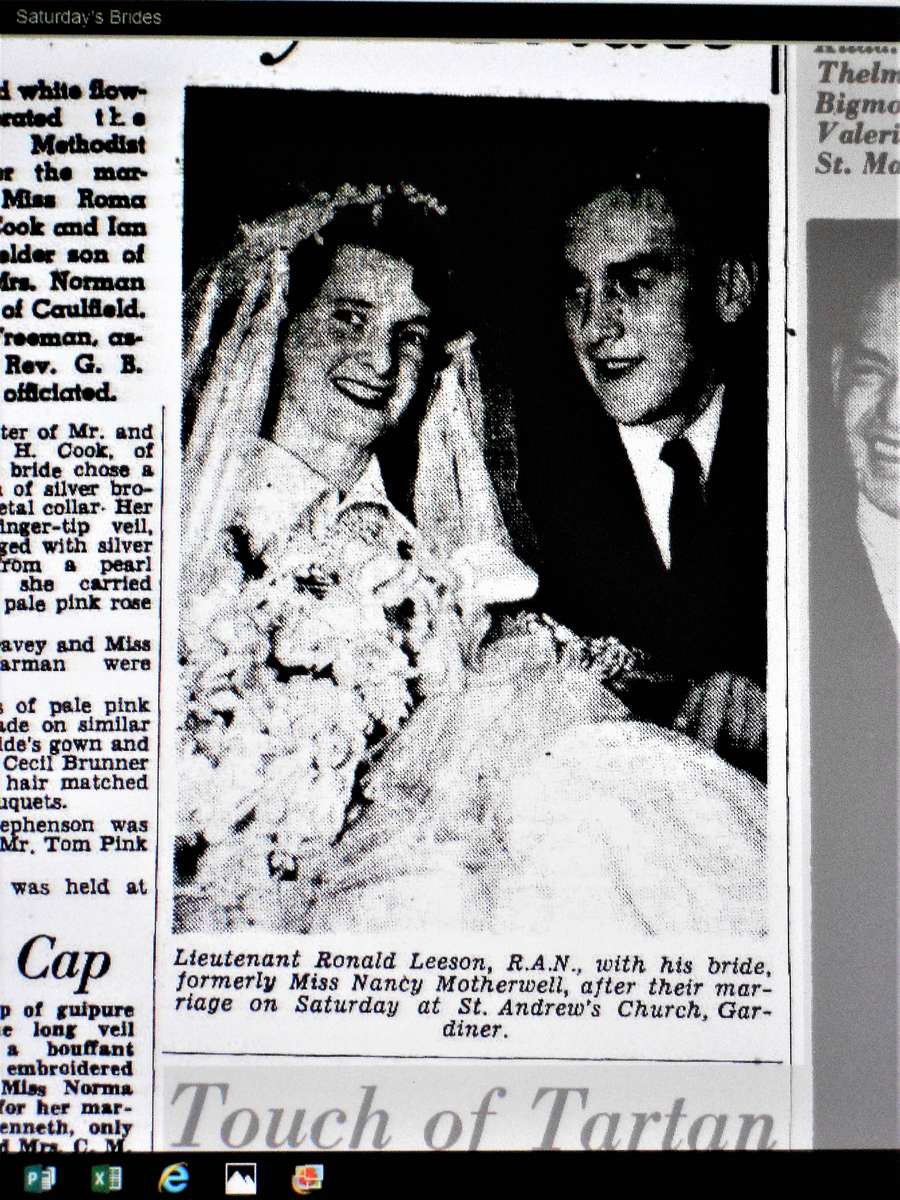 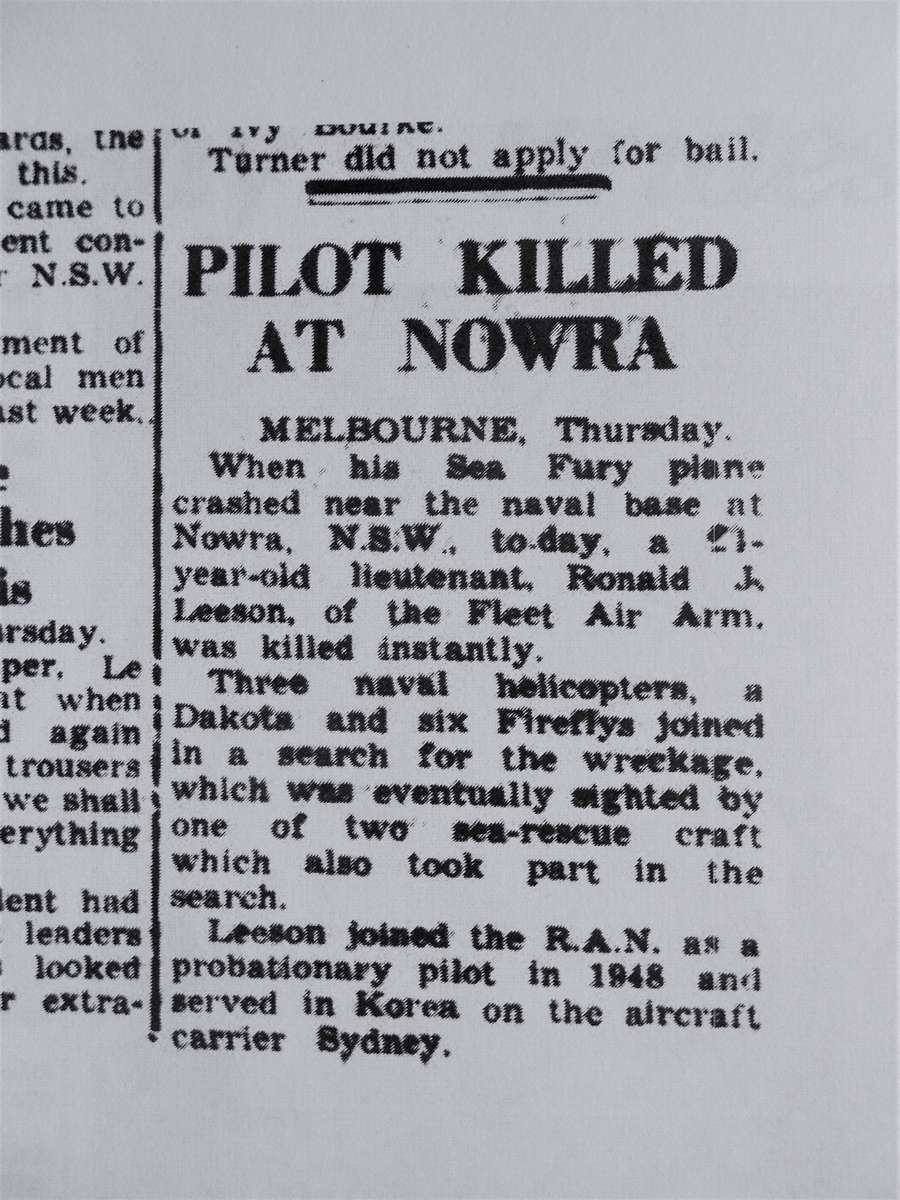