Robert Westbrook Barnett was born on 15 September 1924 at East St Kilda, Vic. Later the family moved to East Gordon, a suburb of Sydney NSW. From there Barnett attended the prestigious Sydney Grammar School at College Street, Sydney, where he gained his Leaving Certificate with high marks in all subjects. As WW2 in progressed in Europe Barnett joined the School’s Air Training Corps (ATC) on 23 October 1941, and was promoted to Flight Sergeant on 12 August 1942.

With the Japanese bombing Darwin in February 1942, followed by the midget submarine attack on Sydney Harbour, Australia was at risk. Having the advantage of his ATC training, Barnett applied for aircrew specialisation at the RAAF Recruiting Centre at Woolloomooloo at the age of 17 years and 9 months and was sworn-in on 11 September 1943. His first draft was to RAAF Bradfield Park for initial training and assessment, then to Narromine Flight Training School and RAAF Uranquinty flying DH82 Tiger Moths and Wirraway aircraft. On 10 January he was promoted to Leading Aircraftman (Pilot).

In October 1944 Sergeant Barnett was posted to Laverton, near Melbourne, for high-altitude training and then to Mildura where he began flying the more powerful P40 Kittyhawk. In April 1945 he was promoted to Flight Sergeant and assigned to RAAF 78 Squadron operating Kittyhawk fighters in New Guinea, Halmahera Islands and Borneo against Japanese positions and shipping. Following the surrendered of Japan on 2 September 1945, Barnett flew his last operational sortie on 9 October, then detached from 78 Squadron on 25 November 1945.

After returning to Australia Barnett was discharged from the RAAF on 3 April 1946. He was awarded the 1939-45 Star, Pacific Star, War Medal, and Australian Service Medal. Like many demobilised RAAF pilots at the end of the war, Barnet would have found it difficult to adjust to civilian life. No doubt the newspaper advertisements calling for pilots and observers to join the newly formed RAN Fleet Air Arm would have attracted his attention.

The result was that at Sydney, on 2 February 1948, Barnett enlisted in the RAN as an Acting Probationary Lieutenant (P) and was posted to the training base HMAS Cerberus (FND) south of Melbourne to begin his RAN Induction Course. On 12 July 1948 he was drafted to the heavy cruiser HMAS Australia for additional seamanship training. After gaining his Watch Keeping Certificate he was confirmed Acting Lieutenant. [FAA Officers are Naval Officers, and required to do ship duties].

As a former RAAF pilot, the next move for Barnett was to be retrained to Fleet Air Arm standards – including aircraft carrier operations. As this was done in the UK, on 19 March 1949, he embarked on RMS Stratheden for the trip to England where, on 25 April 1949, he was posted to Portsmouth Naval Depot for a Divisional Course. The next move was to the HMS Heron RNAS Yeovilton, a major FAA base to begin a series of Short Miscellaneous Air Courses (SMAC) ending on 12 September 1949. This was followed by transfers to five more RN Air Stations over the next six-months for specialised SMACs. This included navigation, night-flying, fleet exercises, weapons training, arrested landings, and being catapulted from an aircraft carrier.

On 24 April 1950 Barnett’s training period ended and he joined 808 Squadron at HMS St Merryn (RNAS Vulture), where 808 Squadron was Commissioned into the RAN the following day. The Squadron operated Hawker Sea Fury aircraft and formed part of the 21st Carrier Air Group which was preparing to embark on HMAS Sydney. The Hawker Sea Fury was an outstanding, single-seater, high-performance, piston-engine aircraft, armed with 20mm cannons and could carry rockets or bombs. Apart from its fighter role they were used for ‘strike operations’ and close ground support. The Sea Fury is one of the outstanding aircraft of naval aviation. 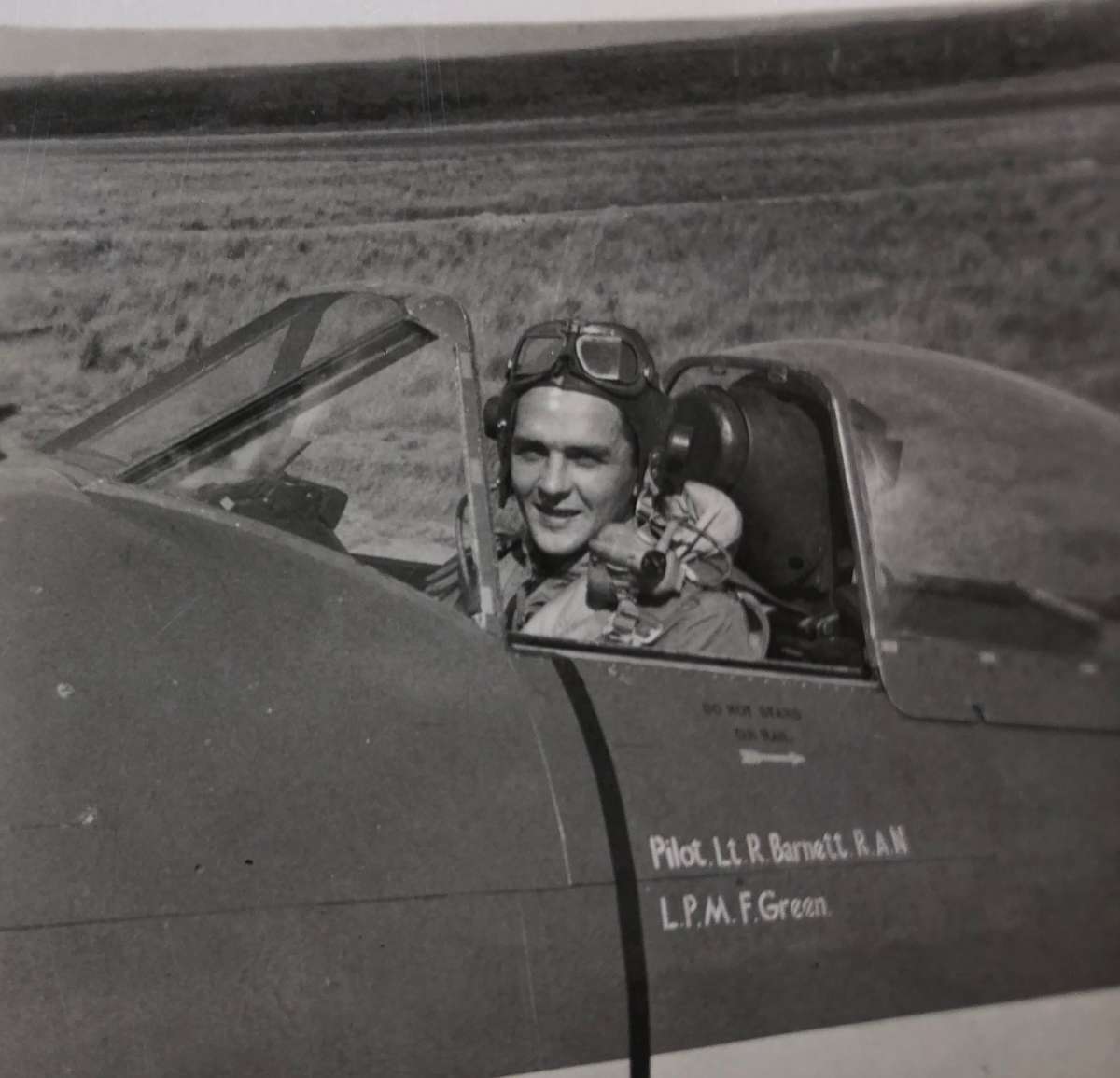 Above: This image of Barnett in his Sea Fury was in the 805 Squadron Diary of the day.  Regrettably we don’t have the name of the photographer, or the date it was taken, but the Diary records the event on Thursday May 3rd 1951 as follows:  “It is with deep regret that I record today the death of my friend and our shipmate, Robert Westbrook Barnett RAN. Upon leaving the deck on the first ‘R.A.T.O.G’ Seafury take-off from this ship, he rolled to starboard and crashed it into the sea from which his body was not recovered.”

Barnett would have begun exercising with 808 Squadron while awaiting the arrival of the aircraft carrier HMAS Sydney, which arrived at Portsmouth on 24 July 1950. From August to October 808 Squadron worked-up with Sydney in British waters. The ship then embarked the 21st CAG (808 Squadron Sea Furies and 817 Squadron Fire Flies), sailing for Australia on 26 October; disembarking the squadrons at Jervis Bay for HMAS Albatross RANAS Nowra on 7 December 1950.

In April 1951 808, 805 and 817 Squadrons were informed they would be going to Korea on HMAS Sydney. Immediately the Squadrons commenced preparations and the process of working-up began. On 1 May 1951 HMAS Sydney began flying exercises off Jervis Bay with the 21st CAG squadrons.

At 0947 on Thursday, 3 May 1951, a Sea Fury piloted by Lieutenant R.W. Barnett RAN crashed into the sea shortly after a RATOG take off from the ship. According to 805 Squadron’s records, he commenced a slight turn to starboard after the launch and this developed into a barrel roll with the aircraft striking the sea wings level, nose down.

A search by Sydney, a destroyer and two ASR launches failed to find any trace of the aircraft or the pilot. Lieutenant Barnett’s death led to the abandonment of RATOG method thereafter. 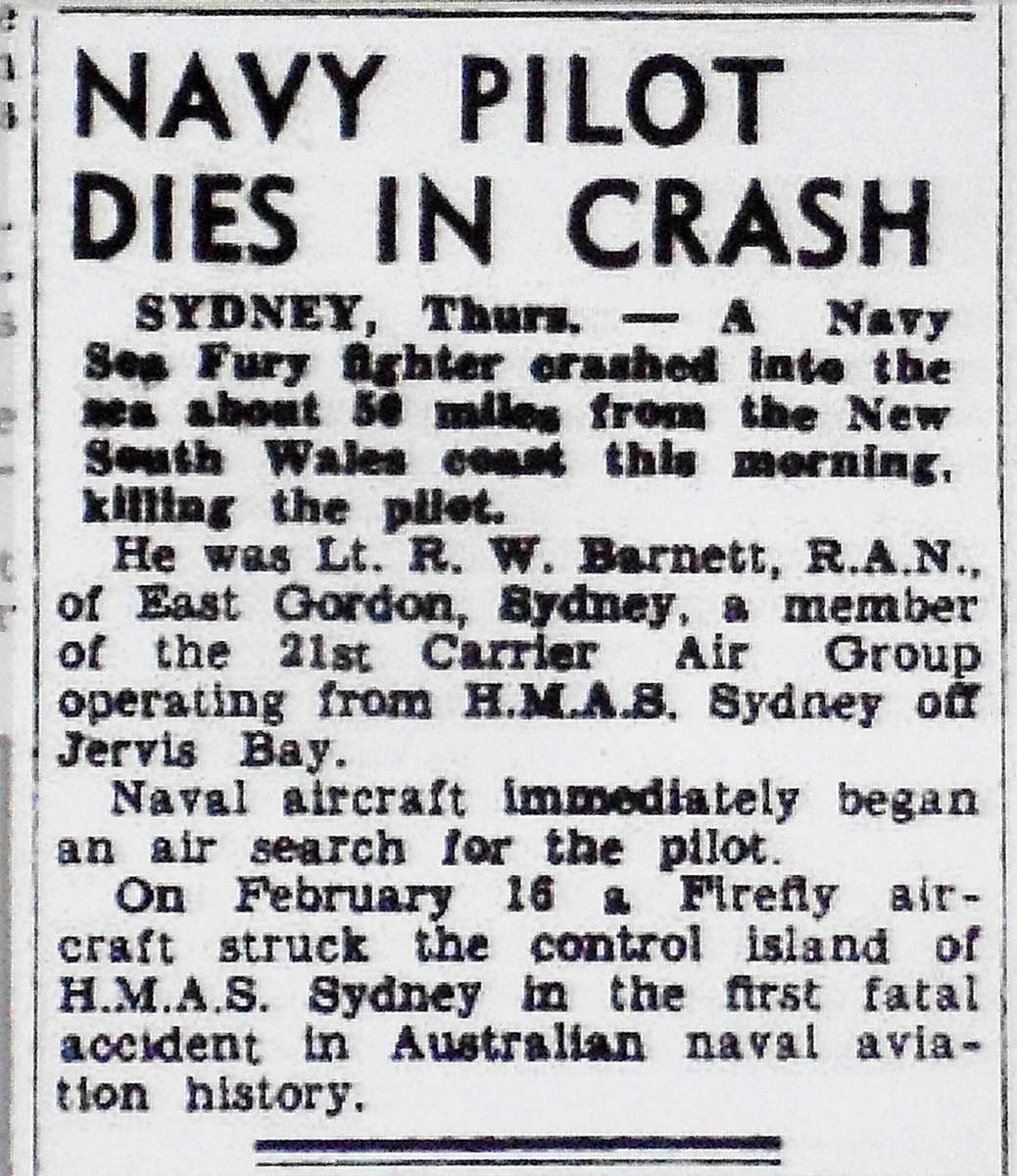 Below. Department of Veterans’ Affairs Nominal Roll Certificate. Note that it shows his RAAF record. 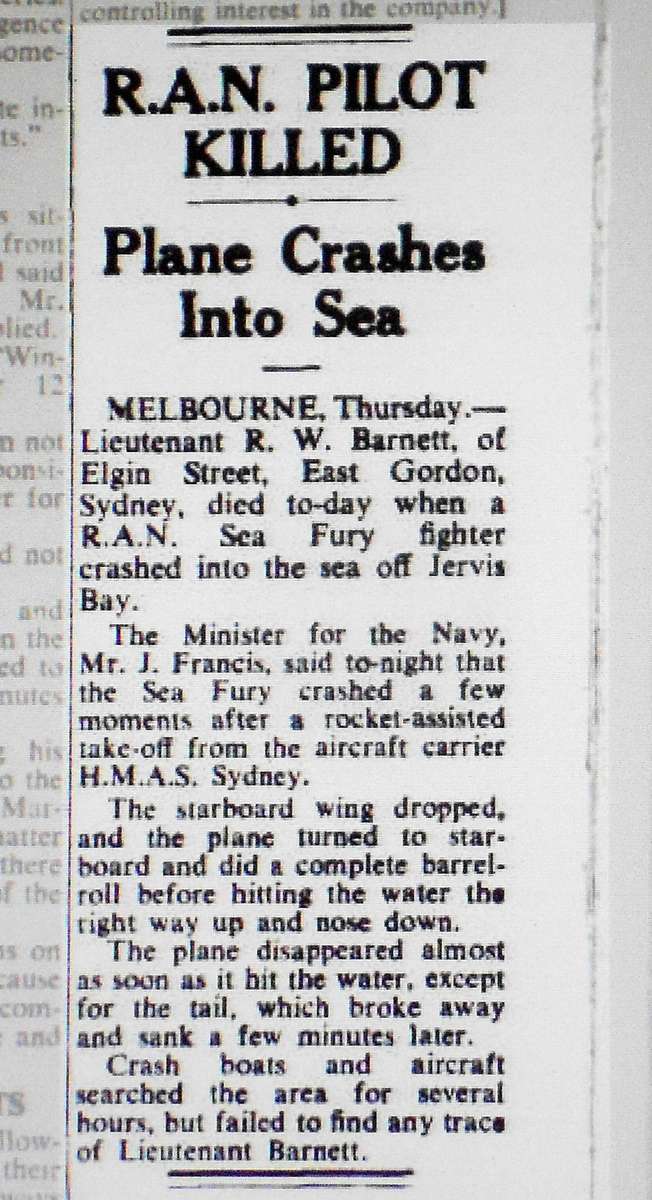 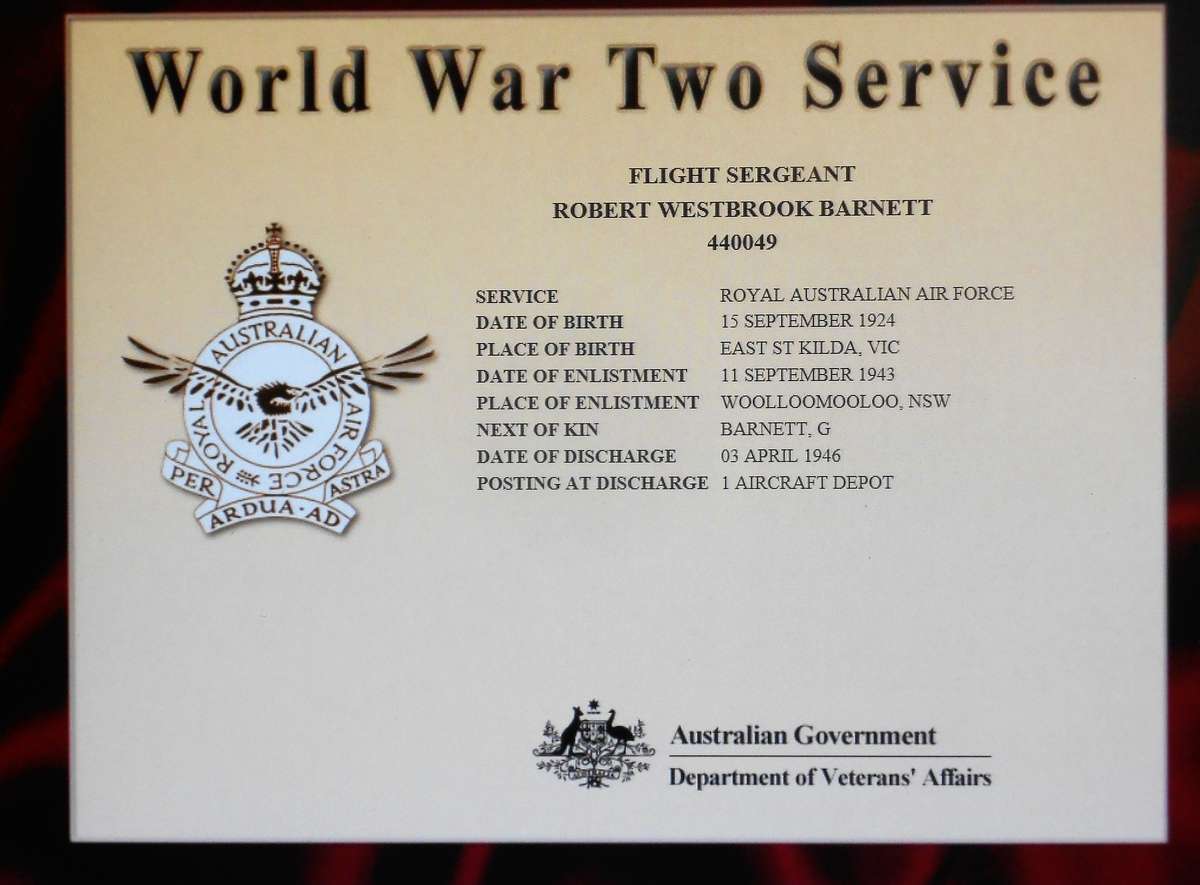