William Edward Dunlop was born, on 31 May 1927, at Brisbane, Qld. He enlisted in the Royal Australian (RAN) on 1 January 1941, as a Cadet Midshipman. His father Herbert, at Coopers Plains, is listed as next-of-kin. With a war in Europe, the RAN active in the Atlantic and Mediterranean, and concerns about a Japanese invasion, the call for midshipmen was important.

Early in January 1941, Dunlop began his training at the Royal Australian Naval College at HMAS Cerberus (FND), south of Melbourne on Western Port Bay. The Cadet Midshipmen were kept busy with academic and naval studies, with some training on an old minesweeper on Hann Inlet. Sport, boating, cross-country races, and survival exercises were part of the curriculum, all of which combined to give the Cadets the knowledge a discipline to become future officers.

Dunlop graduated from the RAN College as a Midshipman on 1 September 1944. He was then loaned to the Royal Navy (RN), for training and experience. In November 1944 he joined the heavy cruiser HMS Suffolk (operating in the Indian Ocean) for a short period. On 21 November 1944 he transferred to the battleship HMS Howe, which was part of the British Pacific Fleet attacking Japanese bases in SE Asia and the Pacific.

Dunlop served on HMS Howe until March 1946, when he was drafted to the Ca-Class destroyer HMS Craysfort. Serving on these ships provided a wealth of experience. On 1 May 1946 he was promoted Acting Sub Lieutenant and drafted to the minesweeper HMS Jaseur. His next posting was to HMS Excellent (Whale Island) at Portsmouth, attending gunnery and torpedo courses.

On 1 November 1946 Dunlop was confirmed Sub Lieutenant. Having completed his RN training, he embarked on SS Orion on 22 February 1947 for his return passage to Australia. Upon arrival he took leave and, on 9 May 1947, was posted to the Battle Class destroyer HMAS Bataan, which included visits to the SE Asia region and Japan. In January 1948 Dunlop received his Watchkeeping Certificate

On 11 February 1948, Dunlop was drafted to the shore base HMAS Penguin on Sydney’s north shore. At the time the RAN was recruiting for the Fleet Air Arm (FAA), including serving officers and men suitable for transfer to this newly formed branch of the RAN. After passing an assessment test Dunlop was selected for pilot training. On 8 March 1948 he embarked on an RAF aircraft for passage to the UK for training with the RN FAA.

On 9 May 1948 Dunlop arrived at HMS Merlin (RNAS Donibristle), Scotland, for Pre-Flight Training. Then on 7 July he transferred to RAF Syerston for Basic Flying Training, ending on 4 July 1949. Having gained his ‘wings’ and been promoted to Lieutenant (P), Dunlop was posted to HMS Fulmar (RNAS Lossiemouth), Scotland, where he joined the Operational Flying School (Part 1) for a ‘strike’ course. This involved converting to naval aircraft; navigation exercises, night flying, weapons training, and aircraft carrier landings

On 12 October 1949 he was posted to HMS Gannet (RNAS Eglington) Northern Ireland, for an Operational Flying School (Part 2) anti-submarine course. The Fairey Firefly (with pilot and observer) was the main ASW aircraft and the course focussed on long range navigation patrols over the ocean, exercising with fleet units, radar training, and other activities. The course ran for three months covering all aspects of anti-submarine warfare.

This was followed temporary posting to HMS Nuthatch (RNAS Anthorn) for aircraft ferry duties. Then a return to HMS Gannet on 1 March 1950 to complete a Deck Landing Training course. Afterwards he transferred to HMS Vulture (RNAS St Merryn); joining 817 Squadron when it was re-commissioned on 25 April 1950, forming part of the 21st Carrier air Group (21st CAG).

As soon as 817 Squadron became operational Dunlop began exercising from HMS Vulture, conducting wide-area navigation, night flying and weapons training; flying Fairey Firefly AS6 aircraft. HMAS Sydney (111) arrived in the UK to collect the 21st CAG (817 & 808 Squadrons), and between August and October 1950 she conducted work-up exercises with the CAG. Then with the CAG embarked she sailed for Australia on 26 October disembarking them to RANAS Nowra on 7 December 1950.

Early in 1951 Dunlop embarked on HMAS Sydney for exercises with 816; returning to RANAS Nowra in May 1951, where the Squadron prepared for deployment to Korea. HMAS Sydney sailed from Port Jackson on 31 August via SE Asia to Korea. On 05 October Sydney began patrolling the coast and attacking enemy supply lines and communications. The Fairey Fireflies frequently bombed bridges and railways, whilst at other times they provided anti-submarine cover. On 26 January 1952 Sydney ended her Korean deployment and made her way back to Australia via Japan, Hong Kong and Singapore.

On 3 March 1952 Dunlop resumed flying duties with 817 Squadron at RANAS Nowra, then on 6 April he transferred to 816 Squadron, flying Fireflies until the end of January 1953 when he was posted to RAAF East Sale for a Central Flying School course. On 29 May 1953 he was appointed Senior Naval Officer at RAAF Archerfield, Qld.

Dunlop returned to RANAS Nowra in November 1954 to begin a jet conversion course with 723 Squadron. He was among the first pilots to fly the DH Vampire jet trainer in readiness for the arrival of the new DH Sea Venom fighters expected in 1956. On 4 December 1954, Dunlop embarked on RMS Arcadia for passage to the UK where he began conversion to the RAN’s second new aircraft – the Fairey Gannet anti-submarine aircraft. Through the early part of 1955 training took place at Fairey Aviation and at HMS Gamecock (RNAS Bramcote) which had a large aircraft engineering base.

At HMS Gannet (RNAS Eglington) Dunlop joined RN 824 Squadron for short time (the above photograph was taken there in earlier in 1955 when he was one of the advance party for the new Fairey Gannet AS1). He then transferred to HMS Seahawk (RNAS Culdrose) on 4 July 1955, to prepare for the Gannet’s acceptance into service, and the re-commissioning of 817 Squadron [on 23 August 1955]. Flight deck trials with the new carrier HMAS Melbourne (11) began in December 1955 and continued until her commissioning on 28 October 1955; next the squadrons embarked, and she sailed for Australia arriving at Jervis Bay on 7 May 1956 where the aircraft disembarked to RANAS Nowra.

On 17 May 1956 he transferred to 724 Squadron, a training squadron based at Nowra, where he was appointed instructor for pilots converting to the new Fairey Gannet aircraft. On 1 August 1956 Dunlop was promoted to Lieutenant Commander (P).

On 6 August 1956 Lieutenant Commander (P) William Edward Dunlop, RAN was doing touch and goes at Nowra in DH Vampire A7-839, when the aircraft crashed about a mile from 26 runway, killing him.  A crash investigation discovered that a dinghy pack clip had opened, allowing a knife to fall out which jammed the elevator control.

His remains lie in the eastern row of Nowra Cemetery. 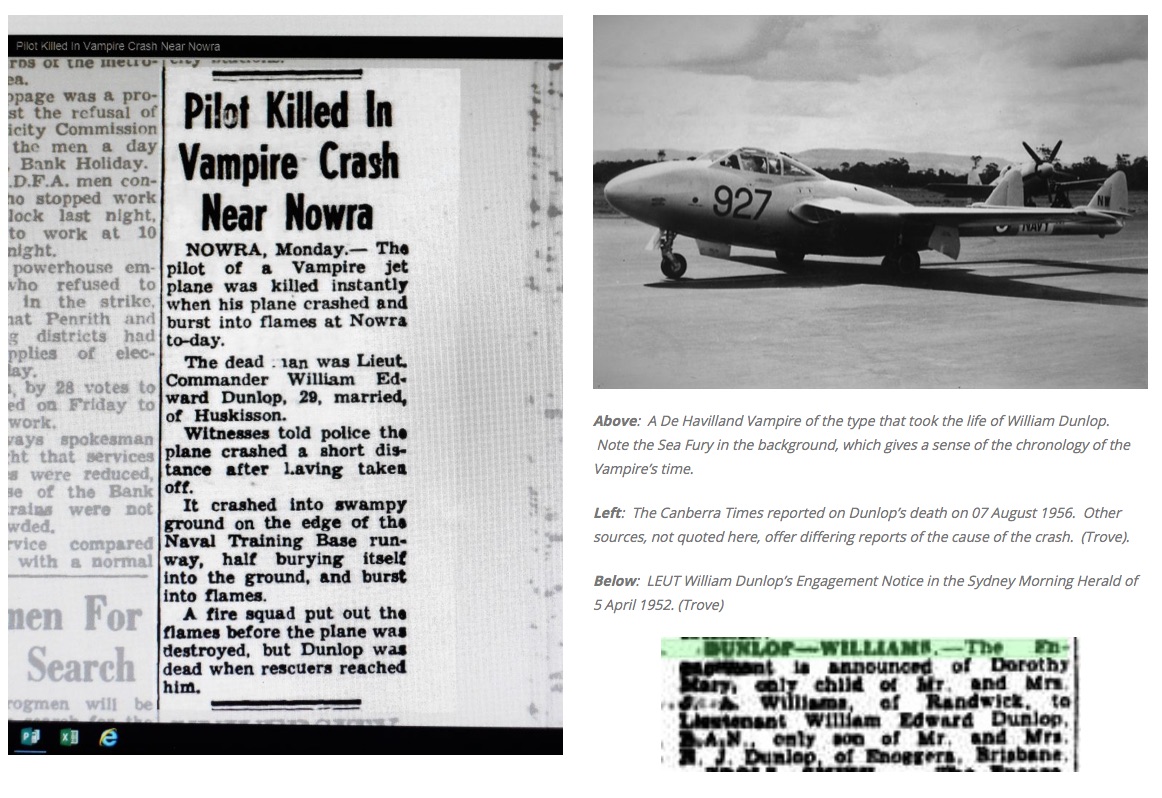 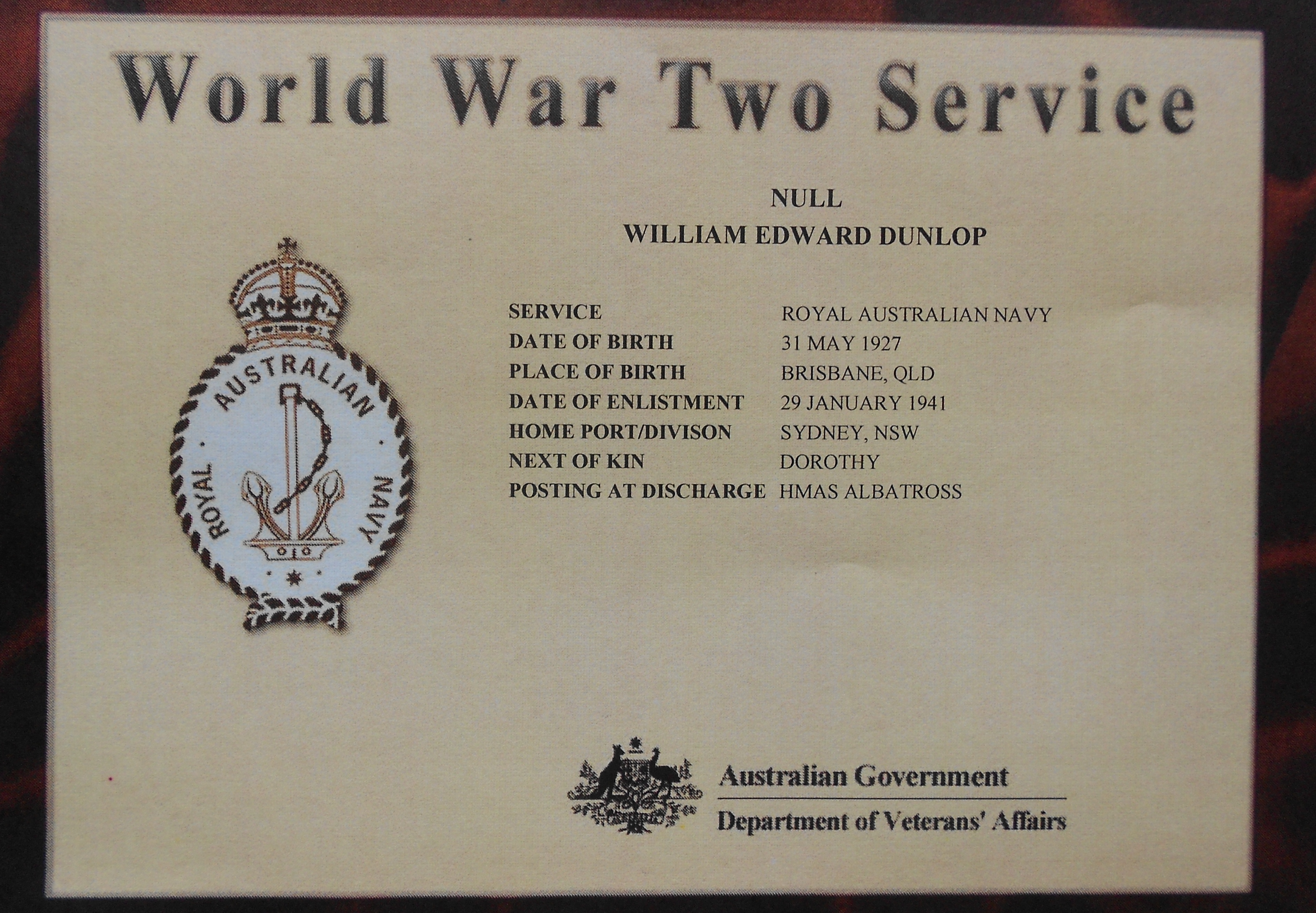