Francis Kevin Fogarty was born on 23 October 1909, at North Sydney, NSW. On 01 January 1923, at the age of 13, he was enrolled as a Cadet Midshipman at the Royal Australian Naval College, HMAS Creswell, at Jervis Bay 180 kilometres south of Sydney, from which he graduated as Midshipman on 01 May 1927.

In line with the practice at the time, Fogarty was transferred on loan to the Royal Navy as a Midshipman for further service and training. To gain experience Midshipman Fogarty served variously on HMS Ramillies, Resolution, President, Warspite, Excellent and Dryard, with time at RN College Greenwich. On 01 September 1929 he was promoted to Acting Sub Lieutenant. (Later, when Sub Lieutenant Fogarty was in charge of the Gun Room, one of the young ‘middies’ under his charge was Midshipman VAT Smith RAN, who was later to play a vital role in the formation of the RAN Fleet Air Arm.)

Sub Lieutenant Fogarty returned to Australia in December 1930 and posted to HMAS Penguin for leave, then to HMAS Canberra where he was promoted to Lieutenant on 01 December 1931. Fogarty remained on Canberra until March 1933, when he was posted on loan to the RN for further service and training, travelling to the UK on RMS Cathay. Apparently, Fogarty showed promise as a navigator and had taken an interest in the Seagull amphibians on HMAS Canberra. On his arrival in England in May 1933 he began an Observers course (for Fleet Air Arm) at HMS Excellent where he remained to the end of the year.

On 30 December 1933 [now Acting Observer], Lieutenant Fogarty was posted to the aircraft carrier HMS Glorious. Then as an Observer, on April 1934, he was posted to HMS St Angelo, a naval base (fort) at Malta, for duties at the RAF/RNAS Hal Far assisting with FAA activities in the Mediterranean. He remained in Malta until June, then transferred to the aircraft carrier HMS Furious on 10 June 1934 for 15 months, serving as an Observer. On 15 September 1935 Fogarty’s RN loan period ended and he was posted to HMAS Brisbane which arrived in the UK (being paid-off); then next to HMAS Sydney (11) which had just been commissioned in the UK; joining her on 27 September 1935 as an Observer.

On Saturday 28 September 1935 Lieutenant Fogarty was married to Mary Elizabeth (nee) Knight, at Smeeth, Kent. Apparently, Fogarty first met Mary on RMS Cathay when sailing to the UK in 1933 and later became engaged.

In October 1935 HMAS Sydney sailed for Australia where Fogarty continued to serve on Sydney until 04 January 1937. Whilst on Sydney, in December 1936, Fogarty qualified as an Observer with an 86.4% pass. Apart from his Observer duties as a naval officer Fogarty was required to perform other shipboard duties such as watch keeping among other things. At that time the aircraft on RAN ships, including the pilot and maintainers were part of the RAAF No 5 Squadron, which Fogarty and an RAN Telegraphist/gunner were attached to.

Lieutenant Fogarty’s next posting was to HMAS Canberra as an Observer from 05 January 1937 until 18 April 1938, when he was posted to HMAS Albatross (1) the former seaplane carrier which was in the process of being sold to the RN. That posting ended on 29 June 1938 when he transferred to HMAS Penguin where he remained until 12 November 1939 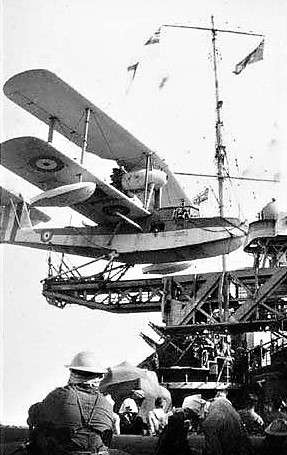 On 13 November 1939 Lieutenant Fogarty joined HMAS Australia (11) as an Observer. Fogarty was then promoted to Lieutenant Commander on 01 December 1939. Again, he would be required to attend to Naval duties, in addition to performing Observer duties whenever Australia’s Seagull V amphibian took to the air. On 3 September 1939 WW2 was declared.

HMAS Australia (11) was recommissioned at Sydney on 28 August 1939 under the command of Captain Robert R. Stewart. The first nine months of WW2 were spent on the Australian coast and in between May and July 1940 she began convoy escort duties between Fremantle and Cape Town. Then between Cape Town and Freetown on the African West Coast as part of the Dakar Squadron observing the Vichy French fleet. During this time Australia’s Seagull V A2-24 amphibian would have been in constant use. In July Australia did escort duties to the UK where her Seagull V was sent to Saunders Roe on 8 August 1940 for overhaul and outstanding modifications, to be replaced by a Walrus amphibian L2247 on loan from the RN (see photo, opposite).

In September 1940 Australia took part in ‘Operation Menace’ patrolling off Dakar where units of the Vichy French navy were located. This included several French cruisers and the battleship Richelieu. The objective of ‘Operation Menace’ involved a powerful RN fleet that was to install General de Gaulle and a Free French force at Dakar to prevent the Germans seizing Dakar and the French warships. The belief that Dakar would welcome de Gaulle was optimistic and ill-founded with the French shore batteries opening fire on the British fleet with RN ships being damaged, and the Vichy French governor refusing to negotiate.

On 24 September 1940 Australia was engaged in a general fleet bombardment of the French fleet and batteries at Dakar, and was twice subject to high level bombing by French twin-engine Glenn Martin aircraft. On 25 September Australia and HMS Devonshire moved towards Dakar to attack French ships and shore batteries. During this engagement Australia was hit aft twice and her Walrus aircraft, calling fall of shot, was attacked by Vichy French Curtiss Hawk 75A aircraft and was seen to crash into the sea.

In a brief description of the incident HMAS Australia’s Captain Stewart reported, ‘At 0917 a Walrus aircraft was observed to have been shot down astern of HMS Barham. Two of the crew were seen to have bailed out. It is with deep regret that I subsequently confirmed that it was my spotting aircraft.’ What is not included is the fact that all three crew members were killed – Lieutenant Commander (O) Francis Kevin Fogarty RAN; Flight Lieutenant George John Isaiah Clarke RAAF, and Petty Officer Telegraphist Colin Kenneth Bunnett RAN.

Both Fogarty and Bunnett are listed on their naval records as ‘missing as a result of enemy action’ from this it is presumed their bodies were not recovered.

The following extract from a letter written in 1980 by Dr. Alan Robinson RN (Ret’d) cast new light on the incident and the friendly relations that existed between him and Fogarty. (Robertson was one of three Medical Officers on Ark Royal at the time).

“Francis Kevin Fogarty I first met…in 1932.  Foggy stayed with us during his summer leave spent in Ardglass (he was under training then as an Observer in the Fleet Air Arm).  On his way to the UK from Australia he met aboard the ship, a Mary Smith who was travelling with her mother, and they became engaged.  Shortly after an aunt left Mary a fortune (£100,000 I believe) and although Foggy had no foreknowledge of this, I’m sure he didn’t worry too much about marrying an heiress.  The weekend at Smeeth included a Sunday morning drink at Noel Coward’s farmhouse in Goldenhurst.  The Smiths were friendly with Noel’s parents, a charming old couple who showed us over the house which included his music room (papered, I remember with manuscripts of Noel’s plays) and the ‘Room with a view’ which inspired the song of that name.  Two Saturdays later I returned to Smeeth for Mary and Foggy’s wedding.  As the ship he was serving in had some untimely exercises going the usual gang of messmates were unable to be present, and another NO, Duncan Storey, and I had to make a very abbreviated arch of swords – I don’t in fact think we drew swords, but it was my first experience of wearing a frock coat, cocked hat and epaulettes all of which I inherited from Jack.  The hat, incidentally, was (and still is) about a half size too small for me.

I wrote regularly to Foggy during my time at Queens University, but our paths didn’t cross again until the autumn of 1940. He was then the Observer in the Walrus, a small three-man flying boat carried by HMAS Australia which had been detailed to take part in the badly planned and ill-fated capture of Dakar, and the French Battle cruiser Richelieu which was lying there. Australia’s Walrus was (usually known as the Steam Pigeon) was observing the fall of Australia’s shells when it was shot down by a French fighter. All three occupants managed to escape by parachute and landed safely in the sea. Alas a salvo from Richelieu exploded near them and so far as I was able to ascertain at the time, killed all three.

When he arrived at Freetown in his ship, just before we set out for Dakar, he came aboard Ark Royal to dine with me and meet old shipmates in our Swordfish squadron. Next day I lunched aboard Australia and had news of Mary and the children. At the time of his death their children were Michael, their eldest and my godson, Mary and the baby, a little chap whose name I can’t remember. I had attended Michael’s christening in the little church they were married in, in the late summer of 1935. Foggy’s ship was abroad somewhere and he wasn’t present, and Mary and the baby went off to Australia to join him shortly after the christening.”

[Webmaster’s note.  In early 2022 we received an email from Peter Fogarty, the youngest son of Kevin Francis, the deceased.  This gives us the name of the baby mentioned above.]

Francis Kevin Fogarty’s name is engraved on the Plymouth Naval Memorial, Devon, UK. The memorial bears the names of sailors who died at sea who have no known grave. His name is also located at panel 1 in the Commemorative Area of the Australian War Memorial, Canberra. 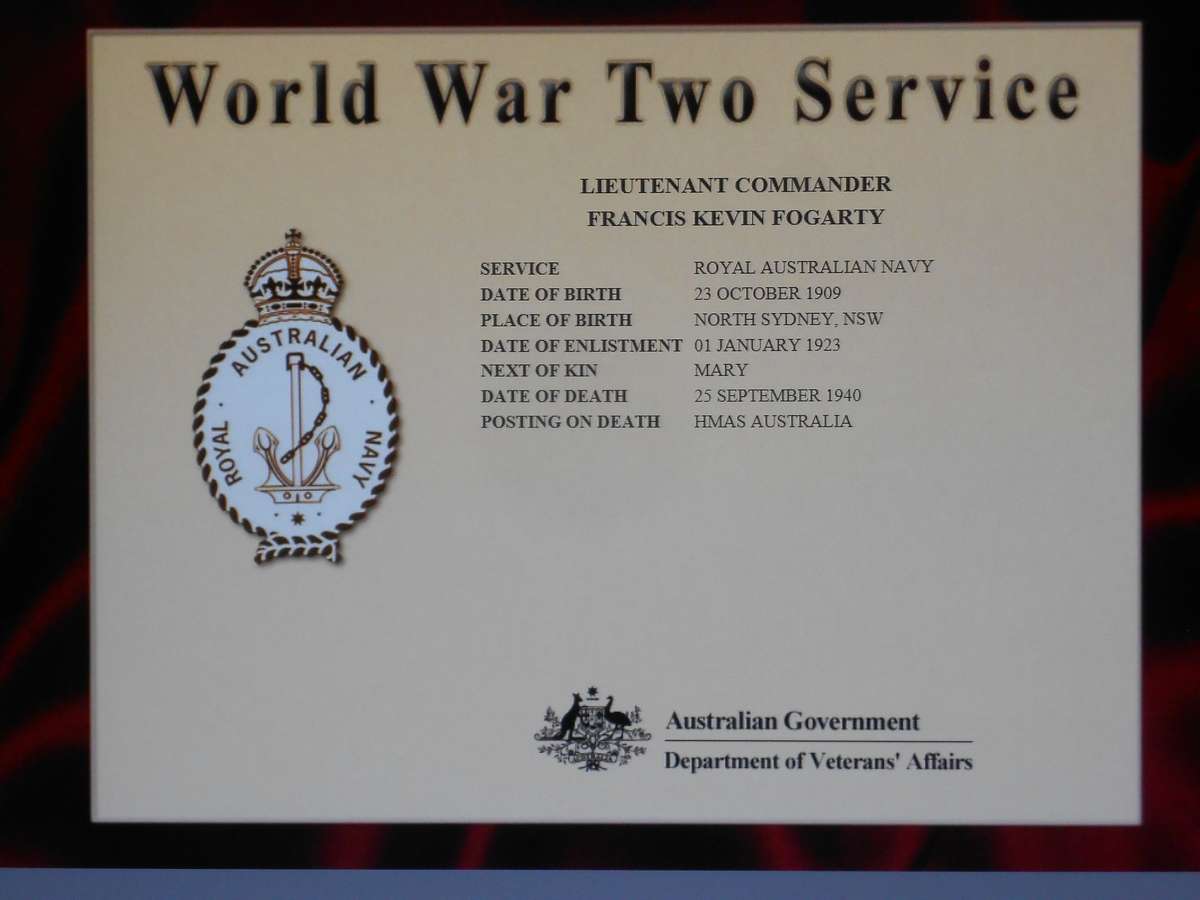