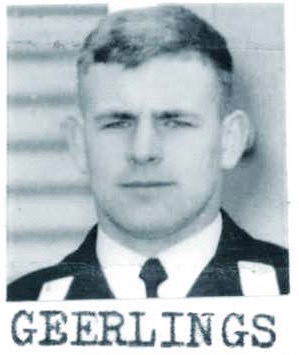 Gerrit Jan Geerlings was born on 12 May 1943, at Deventer, Holland. He enlisted in the Royal Australian Navy (RAN) in Sydney as a Recruit Midshipman (Aircrew) on 17 April 1963, and was drafted to HMAS Cerberus, south of Melbourne, to begin his Basic Naval Training and to be assessed for aircrew training.

After completing his Recruit School training, on 1 July 1963, Geerlings started a Basic Aircrew Training Course, after which he promoted to Midshipman (Aircrew). He was then drafted to the training base HMAS Watson on the South Head of Sydney Harbour, where he received further training in naval subjects.

Some of Geerlings’ RAN records are incomplete or illegible and others are unavailable, but the following outlines his progress. In line with the RAN’s aircrew training program, on 31 August 1963 he was drafted to RAAF Point Cook, near Melbourne, where he joined the No.1 Basic Flying Training School for instruction on the Link Trainer, progressing to the Winjeel trainer aircraft. After flying the required hours, he was rated Midshipman (P).

On 25 May 1964 Geerlings was posted to RAAF Pearce, north of Perth, WA, where he was enrolled on the No 31 Advanced Flying Training School (AFTS) course. At Pearce further training began with the Winjeel, followed by conversion to the dual control de Havilland Vampire jet trainer. As the course progressed it included instrument flying, night flying, formation flying and other exercises.

Having successfully completing the ATFS course, Geerlings graduated with this ’wings’ and was promoted to Acting Sub Lieutenant (P), on 22 October 1964. After a short break for leave he reported at HMAS Albatross (RANAS Nowra), the RAN Fleet Air Arm base, where he was assigned to 724 Squadron, joining the No 5 Operational Flying School (OFS) course.

On 2 November 1964 Geerlings began his familiarisation with 724 Squadron’s aircraft which included the de Havilland Vampire dual control trainers. The Vampire provided a good basis for his next step which was conversion to the more powerful de Havilland Sea Venom FAW 53, radar equipped, two-seater fighter aircraft. 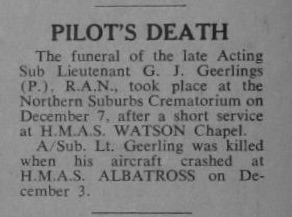 The Sea Venoms were the RAN’s front-line fighter aircraft that operated at sea from the aircraft carrier HMAS Melbourne. The aim of the OPS course was to bring trainees up to front-line standard by ensuring that pilots were thoroughly familiar with the characteristics of the Sea Venom. The training was rigorous including day and night flying, specialised navigation exercises, dummy desk landings and other exercises, preparing him for service with a front-line squadron.

On 3 December 1964 Geerlings was conducting training exercises in Sea Venom WZ932. On approach to runway 26 at RANAS Nowra he undershot the runway. The resulting crash, attributed to aileron failure, was serious and despite immediate medical attention, Acting Sub Lieutenant (P) Geerlings RAN died. A sad ending in a promising career and a reminder of the sacrifice made by a young man in the service of his country. 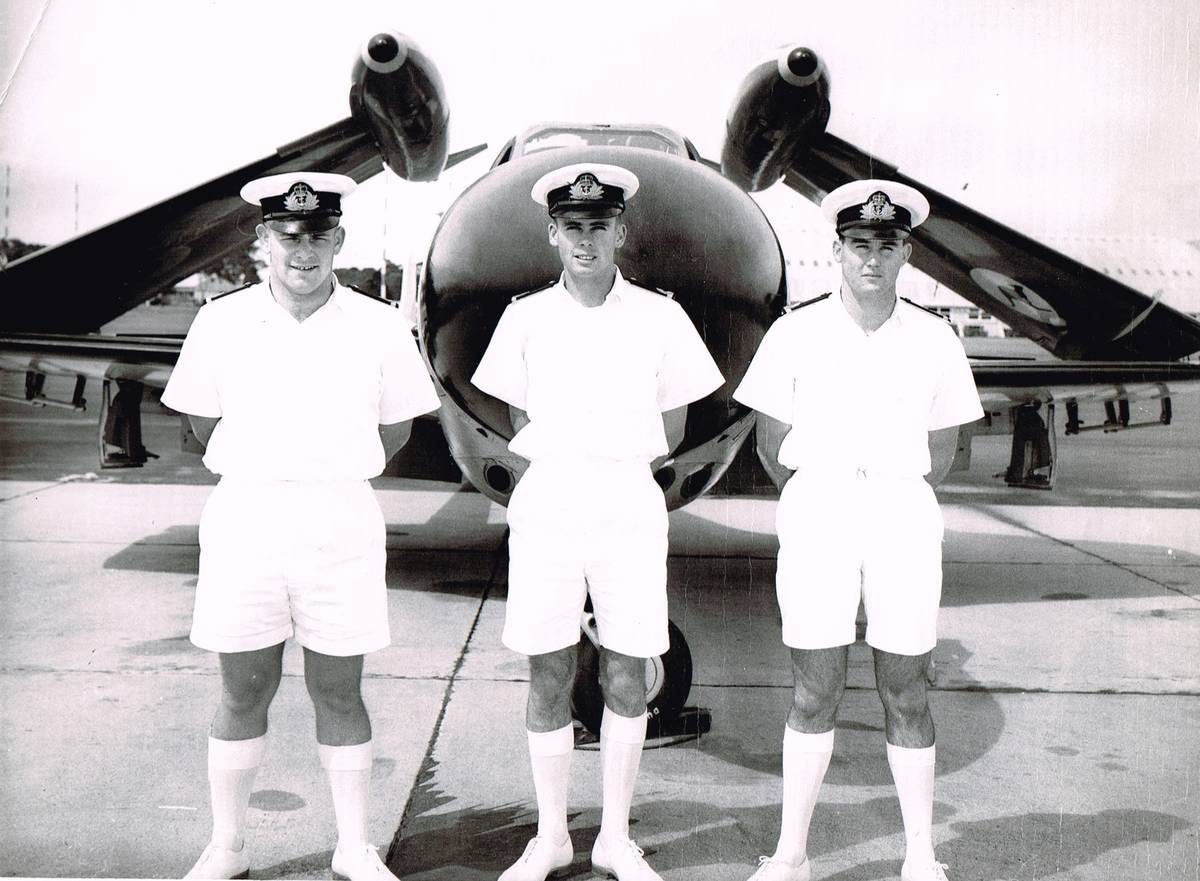 Above:  SBLT Geerlings (left), posing with fellow pilots Barry Daly (centre) and Clive Blennerhasset (right) earlier in 1964. Below: The accident that took his life. 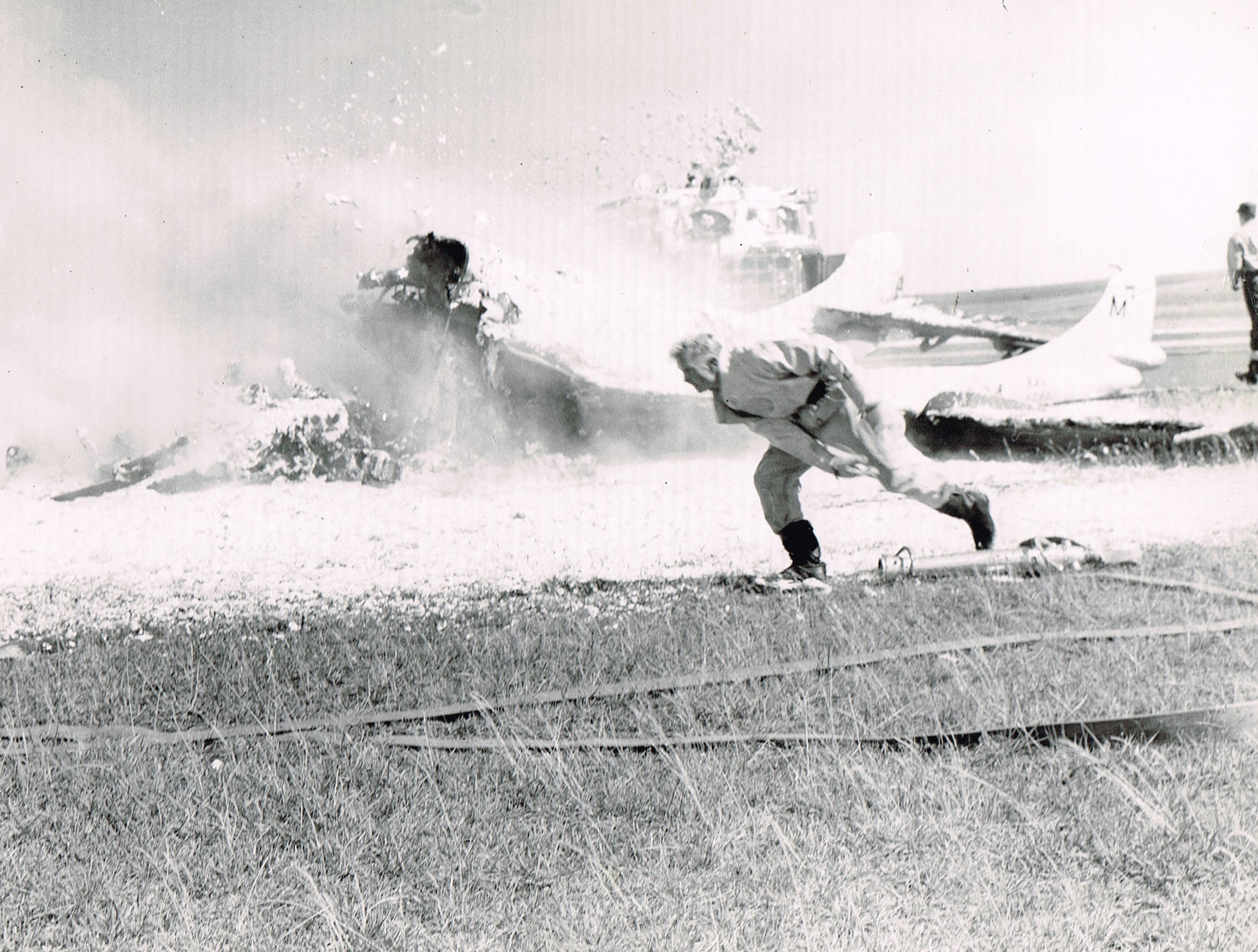