Ernest Charles Gray was born on 31 July 1928, at Maryborough, Qld. On 1 January 1942, he enlisted in the Royal Australian Navy (RAN) as a Cadet Midshipman and was drafted to the RAN College at HMAS Cerberus, Flinders Naval Depot south of Melbourne to begin his training.

In 1942, Japanese forces were threatening Australia, giving Cadets a strong incentive to succeed. Studies included academic and naval subjects, with some training afloat in an old minesweeper on Hann Inlet; sport, survival exercises, cross-country races, camping and boat trips in Western Port Bay. All combined to give Cadets the knowledge and discipline to become future officers.

Gray graduated from the RAN College as a Midshipman on 1 September 1945. He was then sent to the UK on loan to the Royal Navy, for training and experience. His first ship was  the battleship HMS King George V, on which he served until 26 November 1946, before moving to HMS Duke of York.  That was followed by a posting to the destroyer HMS Dunkirk on 28 April 1947.

On 1 September 1947 Gray was promoted to Acting Sub Lieutenant. Thereafter, he was posted to another destroyer and several RN shore establishments thus ending his time with the RN.

On 15 May 1949 Gray was confirmed Sub Lieutenant, and on 21 June 1949 he embarked on RMS Orcades for passage to Australia. In September 1949, Gray joined the heavy cruiser HMAS Australia on which he was serving when he was promoted to Lieutenant in April 1950.

Around this time Gray requested a transfer to the RAN Fleet Air Arm and in May 1950, following a medical examination, he was approved for Aircrew training. On 21 August 1950, Gray was posted to RAAF Point Cook, joining the No 1 Elementary Flying School for pilot training.

Gray graduated from RAAF Point Cook on 2 August 1951 after gaining his ‘wings’. Having completed his basic flying training, he embarked on RMS Orion for passage to the UK, where he was posted to HMS Fulmar (RNAS Lossiemouth) for an Operational Flying School (OFS 1) course. Here he expanded his flying skills on naval aircraft, including weapons training and deck landing serials on RN carriers. Then, in February 1952, he moved to HMS Seahawk (RNAS Culdrose) for his OFS 2 course, flying Hawker Sea Fury fighters.

After completing his training at Seahawk on 26 May 1952, Gray did temporary duty at several RN air stations pending his return to Australia. On 4 December 1952, Gray together with his wife and two infant children, embarked on RMS Strathaird for passage to Sydney. After taking leave he reported at HMAS Albatross (RANAS Nowra), he reported for flying duties with 850 Squadron on 27 January 1953.

850 Squadron had been recommissioned on 12 January 1953, as a front-line fighter squadron equipped with Hawker Sea Furies. In 3 July, the Squadron embarked on the carrier HMAS Vengeance for ‘work-up’ exercises at Hervey Bay area in preparation for the squadron’s deployment to Korea, before returning to RANAS Nowra on 9 August. In the interim, on 27 July 1953, the Korean Armistice was declared.

Although Vengeance was scheduled for the Korean ceasefire patrol, HMAS Sydney (111) was assigned the task. To boost squadron efficiency 850 Squadron spent the latter part of September 1953 ‘working-up’ on Sydney, together with 805 and 816 Squadrons, ready for deployment to Korea. On 27 October 1953, HMAS Sydney sailed from Fremantle via SE Asia for Japan. On the trip north Sydney exercised with RN, USN, HMCN and HMA ships, with the aircraft squadrons heavily engaged. Again, during Sydney’s Korean tour of duty, the squadrons worked a busy schedule, patrolling the ceasefire line and coast, often in difficult winter conditions.

On 4 May 1954 HMAS Sydney ended her second Korean tour and sailed for Australia via Hong Kong and Singapore, before arriving at Fremantle on 2 June 1954. After disembarking to RANAS Nowra in June, 850 squadron began preparations for a short embarkation on HMAS Vengeance; followed by the decommissioning of 850 on 3 August 1954. Prior to that, on 12 July 1954, Gray was posted to RAAF at East Sale in Victoria for a Flying Instructors Course No. 12.

On Wednesday, 21 July 1954, he was in Tiger Moth A17-575, together with Pilot Officer Douglas Doel, RAAF, when it crashed at Fulham, west of Sale. The aircraft was doing manoeuvres when it flipped over and nose-dived into the ground, bursting into flames. A farmer who saw the crash said both occupants would have been killed instantly.

Below:  Newspaper cuttings from the Canberra Times and The Argus of 22 July 1954 (Trove). 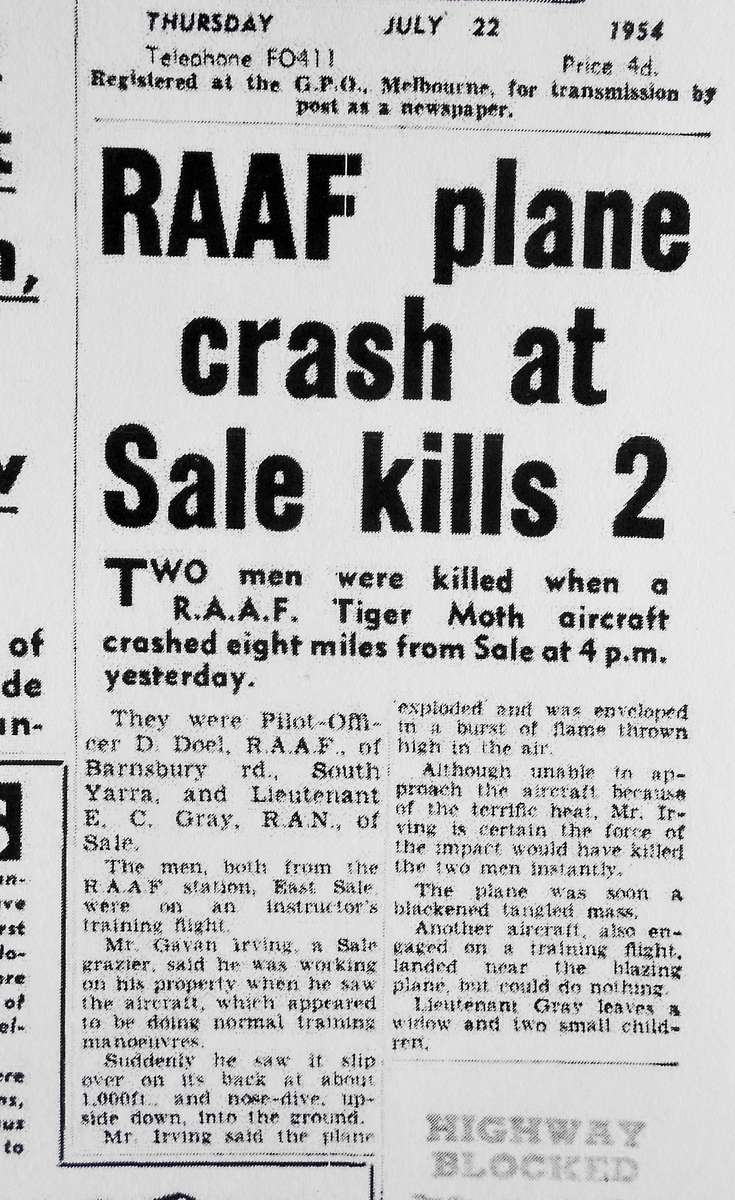 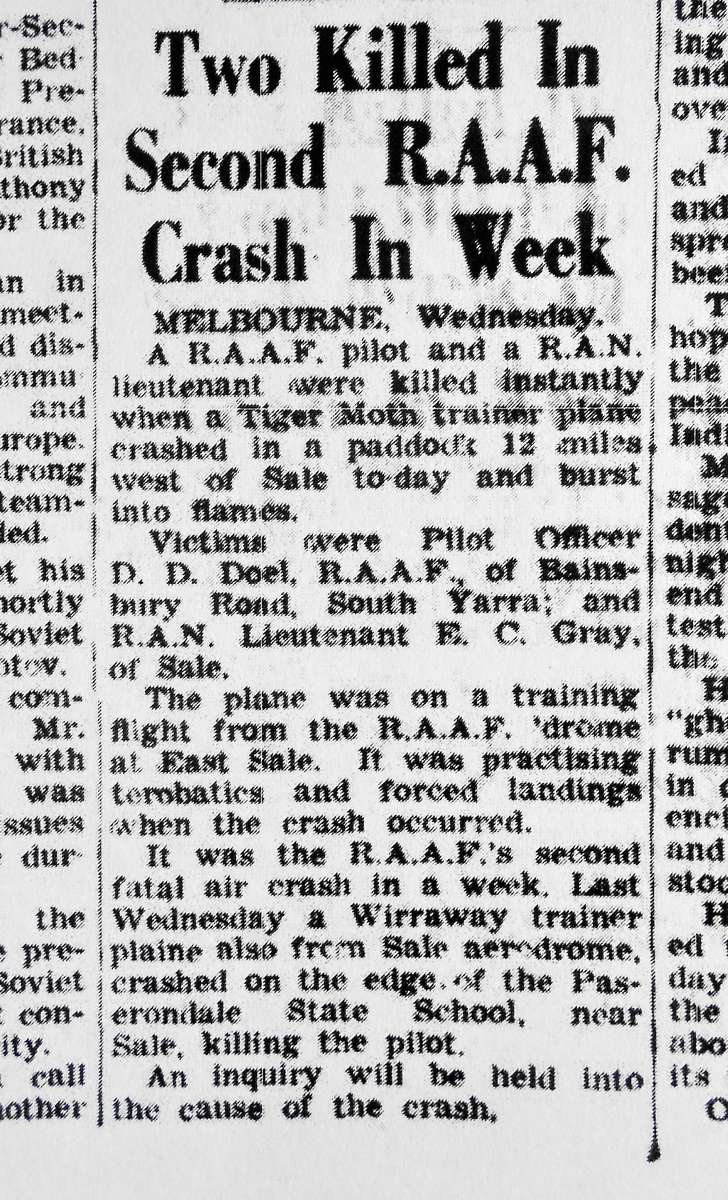