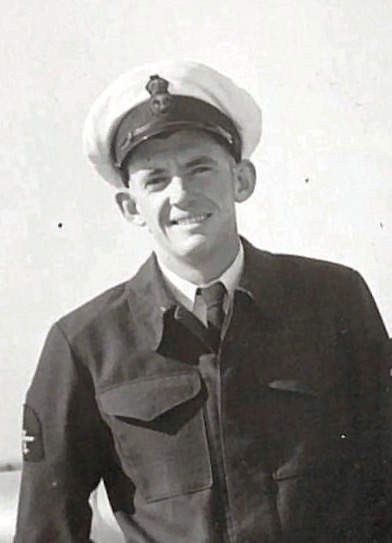 Brian Howe joined the RAN on NAAC course No.9 in March 1954.  He was selected for pilot training and progressed through the RAAF training course No 19, at Archerfield Qld, Uranquinty NSW and Point Cook Vic.  He graduated as dux of the course of 5 RAN and 5 RAAF trainees in August 1955.  He was awarded his pilot’s wings, commissioned as Acting Sub Lieutenant and completed the Short Service Officers course, before being posted to HMAS Albatross at Nowra NSW, for Operational Training with 724 Squadron.

He was selected for fighter training and carried out conversion first to the Fairey Firefly Trainer and Mk 6, followed by the Sea Fury FB 11.

On April 11 1956, he carried out a night cross-country flight in Sea Fury WH586 as part of the OFS syllabus.  On return from the flight, he was briefed to orbit the Nowra airfield and to fire a Very pistol through the firing chute provided in the side of the Sea Fury cockpit.

He was cleared by Nowra Tower to carry out the exercise and over flew the airfield to commence the orbit.  After a number of transmissions from the Tower went unanswered an emergency was declared, but searches of the area revealed no indication of the location of the aircraft.  Further searches after daybreak revealed the wreckage in heavily timbered terrain, several miles to the south-east of the airfield.  The aircraft was totally destroyed and the pilot would not have survived the impact.  With reference to the damage to the foliage along the flight path, it was determined that the aircraft impacted the trees in a slight nose down attitude and small degree of left bank.

805 Squadron’s Diary for Wednesday 11 April 1956 deviates slightly from the account above and reads as follows:

“We were all shocked to learn  that on return from a night Navex and while rejoining [the] circuit S/Lt Howe’s Sea Fury was seen to dive and crash south of the tower. An all night search failed to find any wreckage but a helicopter with doctor aboard found the crashed aircraft at dawn. S/Lt Howe was found to have died instantly at approximately 10pm Wednesday.”

While no definitive  cause could be established, it was assumed that while loading or attempting to fit the Very pistol into its chute, the pilot became distracted and failed to realise that the aircraft was descending,  Supporting that assumption, there was no lighting on the ground in the direction of flight and the moonless night provided no external visual reference.