Frank Albert Sturgess was born on 3 March 1929 at Brisbane, Qld, the son of Mr and Mrs Albert Sturgess. On 1 January 1941 Sturgess enlisted as a RAN Cadet Midshipman at Sydney, and was posted to the Royal Australian College, at HMAS Cerberus (FND), south of Melbourne on Western Port Bay. Cadet training at the College was comprehensive with a balance between academic and naval subjects with plenty of outdoor activity and sport. 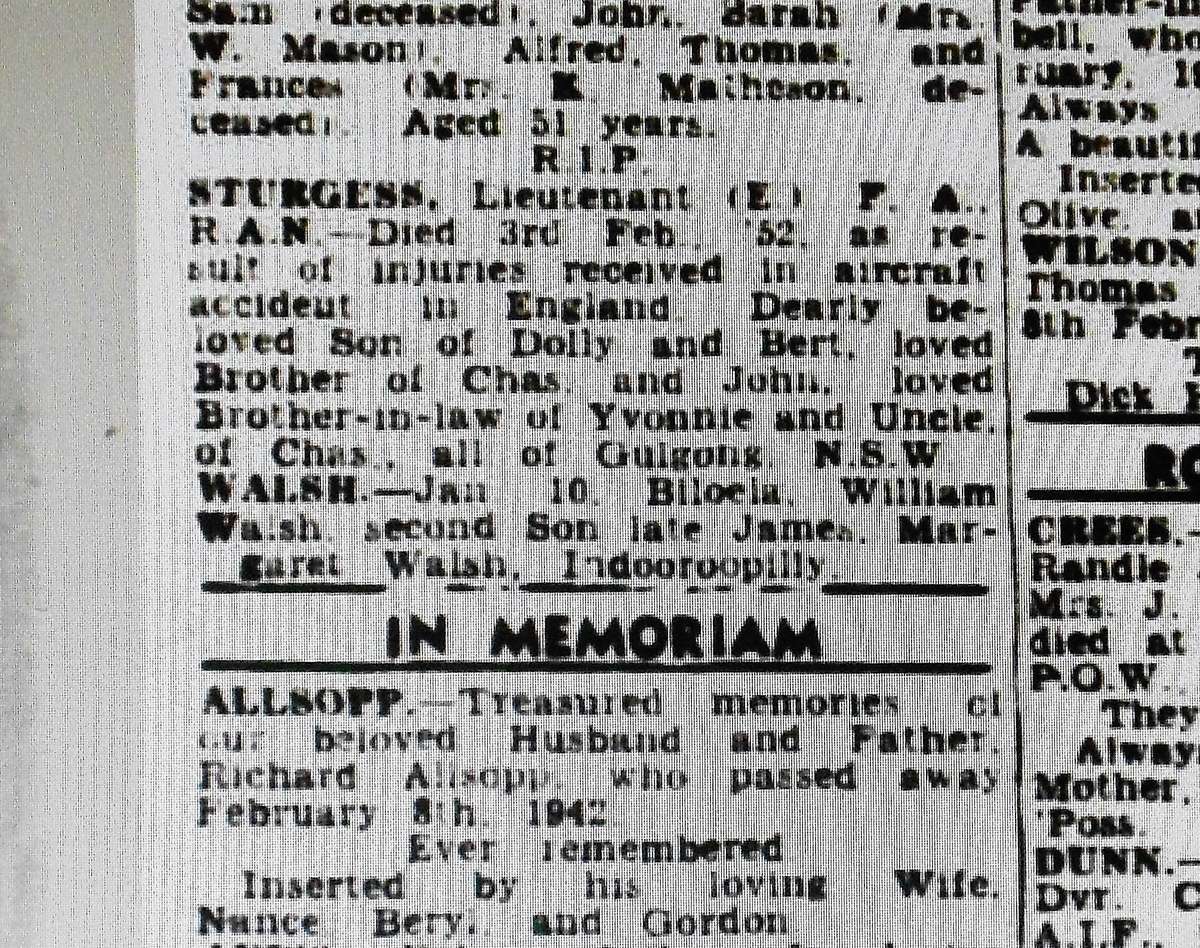 Below: Sturgess is buried at the CGC Cemetery in Helston, Cornwall. Photo by Mary Laity: ‘Australians at Rest In The UK WW2″ 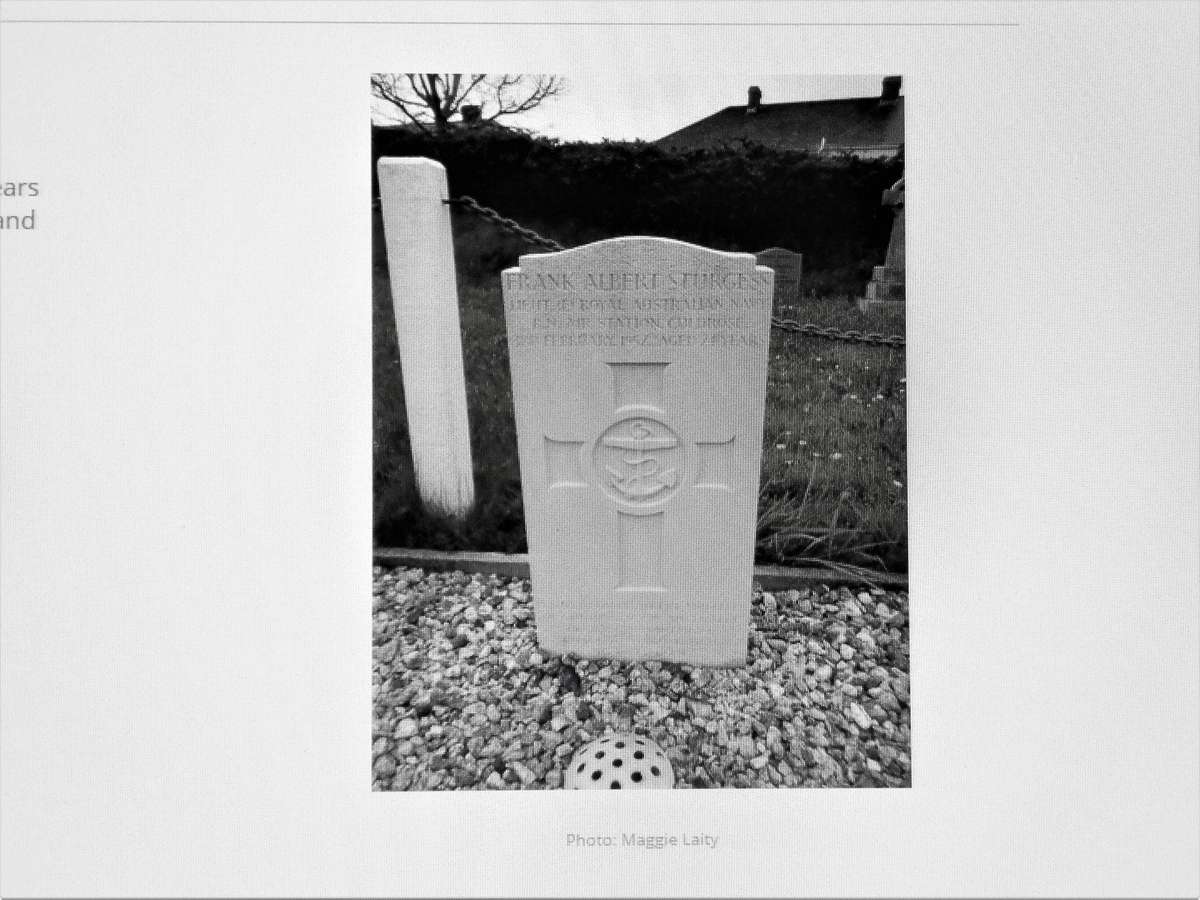 In August 1944 Sturgess graduated from the RANC as a Midshipman (E) with a First Class Certificate. After completing ‘Cruiser Training’ and having been selected for further training in the Engineering Branch, in November 1944 Sturgess embarked on MV Port Chalmers for passage to the UK. On 6 January 1945 he was posted to HMS Drake, at Plymouth Naval Dockyard, where he attended the Royal Naval Engineering College at Keyham Yard with its large engineering workshops and dry docks.

On 1 May 1946, having been promoted Acting Sub-Lieutenant, Sturgess was drafted to HMS Tamar (shore base at Hong Kong), and on 26 June 1946 he joined the cruiser HMS Swiftsure, which was part of the British Pacific Fleet. Then to HMS Fernie, an escort destroyer in the UK, and in November 1946 to the Battleship HMS Anson, which had returned to the UK after service in the Pacific. Early in January 1947 Sturgess returned to the Royal Navy Engineering College at Plymouth to further his Engineering studies. On 1 May 1947 Sturgess was confirmed in his rank as Sub-Lieutenant (E) and in April 1948 he was promoted to Acting Lieutenant (E). In September 1948 he boarded MV Kanimbla for his return passage for Australia.

After taking accumulated leave Sturgess was posted to the heavy cruiser HMAS Australia on 15 December 1948. In 15 June 1949 he was awarded his Engine Room Watchkeeping Certificate and confirmed Lieutenant (E). At that time the RAN was recruiting pilots and observers to join the Fleet Air Arm – the appeal of which must have interested Sturgess. As the Navy was encouraging applications from suitably qualified people within the RAN, his application to transfer to the FAA Air Engineering branch was soon approved.

In early 1950 Sturgess boarded RMS Orcades for passage to the UK where he began an Air Engineering conversion course at HMS Thunderer at Plymouth Dock Yard which ended in September 1950. He was then posted to HMS Merlin RNAS Donibristle, a major RN FAA air station with large repair facilities. At this point it appears (from the faded records) that Sturgess decided to move from Air Engineering to Aircrew, as his next move, on 25 October 1950, was to RAF Syerston, where novice FAA pilots were trained at the No 22 Flight Training School.

Sturgess was then posted to the RN FAA training base HMS Siskin RNAS Lee-on-Solent on 19 August 1951 where he began more flight training with RN FAA instructors. On 24 August he began his No 1 Operational Flying Training course at HMS Fulmar RNAS Lossiemouth, Scotland, converting to the Fairey Firefly and other aircraft, which continued until 13 November 1951 when he was sent to HMS Seahawk RNAS Culdrose in Cornwall, to complete part 2 of the Operational Flying Training Course.

It was during his time while flying at RNAS Culdrose that, on 01 February 1952, Lieutenant Sturgess RAN was involved in an aircraft accident at RAF Predanack, near the Naval Air Station at Culdrose.  His Sea Fury stalled on approach to the runway and although he survived the crash he  succumbed to his injuries two days later.    He was 22 years old.

Compiled by Kim Dunstan from the following References:
National Archives of Australia
Naval History Net – Casualties 1952
Australians at rest in the UK 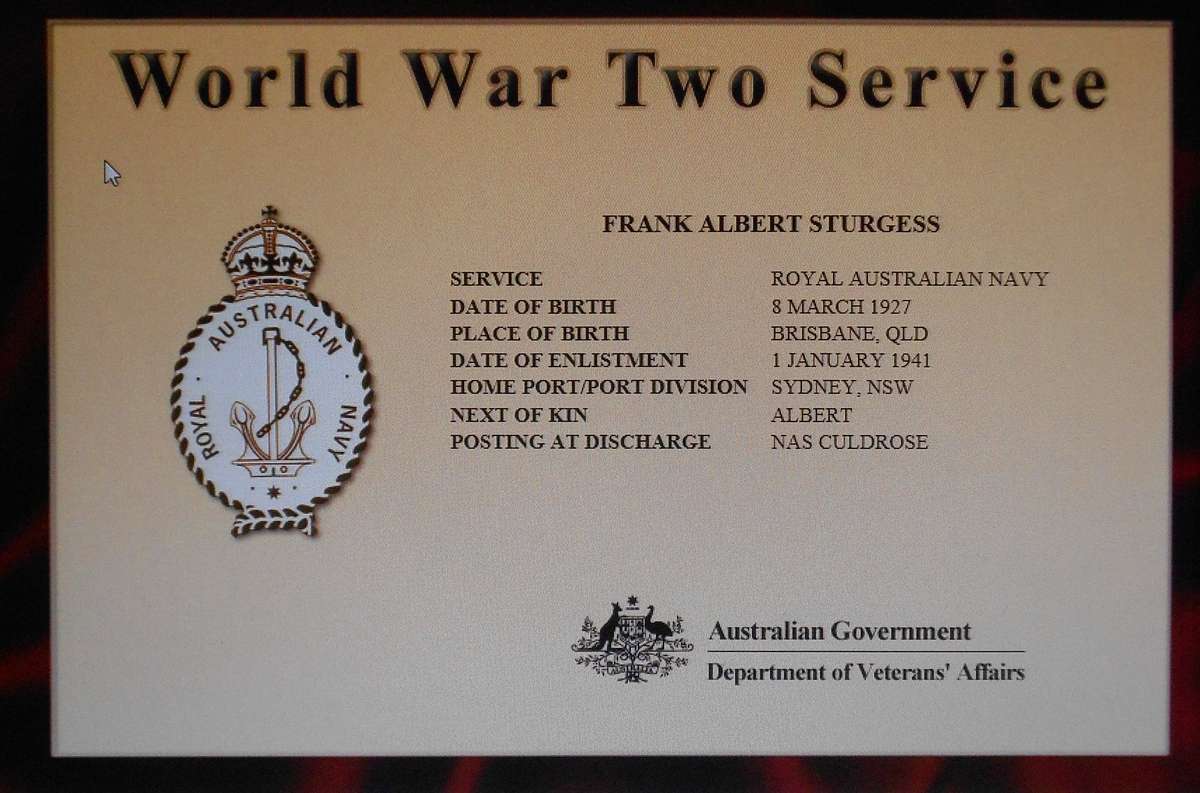