Related PTA - KALKARA Articles
Back to Heritage Index
Back to Our Heritage: Pilotless T..

Record of Kalkaras in Service. Courtesy of ADF Serials.

N28-5       Lost during exercises off Jervis Bay on the 15/12/2001. It was found by a group of walkers four months later after having washed up on a beach south of Cronulla, more than 130 kms north of where it was shot down. See DSTO investigation report here. It has since been restored by Boeing Australia and was presented to the Fleet Air Arm Museum, Nowra on the 24/08/2005.

Worth A$47 million, the Kalkara (“Storm Bird”) Pilotless Target Aircraft contract provided for 9 years of target system operation with two ground control systems, associated ground support equipment, and the provision of 20 target aircraft from 1998 to 2008. (There were originally 20 UATs purchased under the Acquisition Contract, however, an additional UAT was obtained taking the total to 21. Their serial numbers were N28-001 through to N28-021).

The first Kalkara flight was conducted from Jervis Bay on June 19, 1998 and the Kalkara was also operated from HMAS Stirling and the Woomera Weapons Range in South Australia with operational flights commencing in February 1999.

After nearly four years of trials and operations, a Kalkara successfully flew mission 100 on Thursday March 27,2006 from Gilbert Point at HMAS Stirling while the  Kalkara Flight was conducting development trials and providing aerial targets to ships missile systems. 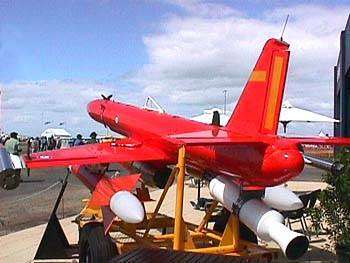 During the OR process the Kalkara system was awarded an Australian Military Type Certificate (AMTC) and became the first UAV in the world to successfully achieve a full AMTC in August 2000. Today most UAV/UAT systems in the world follow the Kalkara example and hold an AMTC or equivalent for their country of operation.

The Kalkara proved to be a valuable asset to the ADF as it was the target system used for the introduction of at least three missile systems into the AF including ASRAAM and AMRAAM for the RAAF, and ESSM for the RAN.

The Kalkara system was to be the last fixed wing aircraft to be owned and operated by the RAN.

Launched using rocket-assisted take-off from a cradle, Kalkara was been operated from basic facilities in locations on Australia’s East and West coasts working for Navy. It has also been operated at the Air Weapons Range in Woomera in inland South Australia for work with the RAAF fighter force.

The Kalkara was capable of operation between 100 feet and 40,000 feet and its top speed was Mach 0.86. Depending on its planned flight profile, its endurance was about 30 to 60 minutes.

With a 6G manoeuvre limit and low-level speed of around 360 knots, Kalkara could simulate missile and aircraft profiles that challenged ship and fighter aircraft weapon systems and operators alike. Although Kalkara was normally fitted with a variety of towed targets from the HUTTS target family, or could be targeted directly while being manoeuvred.

The Kalkara was phased out in 2008 and no UAV target has yet replaced it.