Related Sycamore - Anecdotes Articles
Back to Heritage Index
Back to Our Heritage: The Bristo..

Flying in the Sycamore During the 1960’s

as recalled by Garth (Polly) Perkins 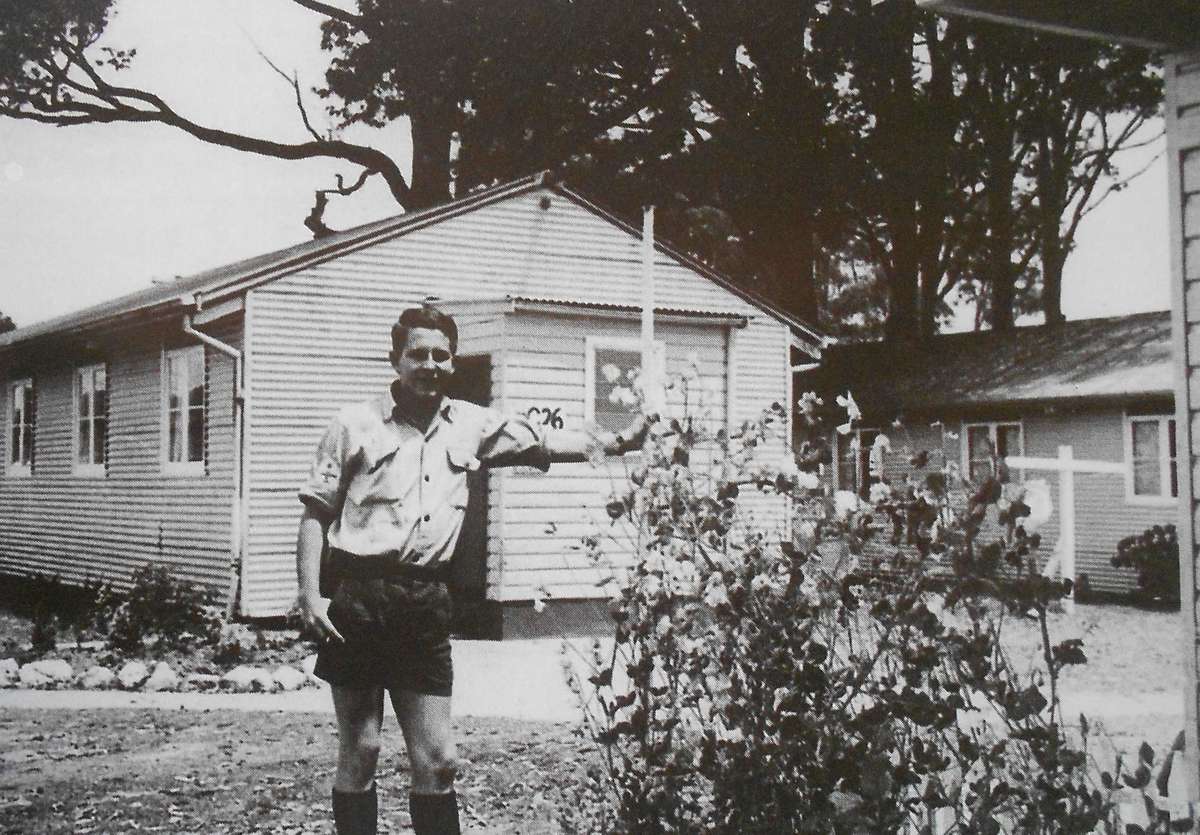 Garth Perkins standing outside one of the old ‘wind tunnel’ accommodation huts of the old days.

I started flying training on 13/6/62, my first flight as a trainee winch operator was in a sycamore XN 448, side number 852, and the pilot was Lt. O’Day, with myself trying to direct the lowered winch hook into a floating box.

Flying training lasted till we went onboard HMAS Melbourne in JB (Jervis Bay) where duty as “plane guard” Commenced on the 16/1/63. At the time I flew with Lt. Wood until we departed for Tasmania. The rest of the trip was with Lt. Jerry O’ Day and Lt. Eckersly with John (Bing) Andersen and me as winch operators. Both Bing and I were A/E (Aircraft/Engine) mechanics, so we were able to maintain the aircraft we flew in – XA 220 with the original side number 907 (later 849) was the oldest operational Sycamore in the world (photo in the book Submarine Hunter page 207). It now resides at the Fleet Air Arm Museum in Nowra.

There were a few incidents in Hobart, of particular interest was that of an American Radio ship from the Antarctic with a damaged prop shaft coupling. Imagine the problem of lowering our Chief onto the heaving deck of the cluttered ship – it was OK lowering the replacement coupling , but I was sure that winching the Chief down I was likely to impale him on one of the many aerials. We eventually persuaded the ship to lower a boat to accept our brave Chief.

Another one was when we were requested to do a wet winching display for the Queen who was on the Britannia, the Duke watched on with great interest as he had also become qualified to fly Sycamores. We winched three ‘bodies’ from their life floats, placing them in a work boat standing near by. The last person was an obnoxious volunteer from the constabulary, who was accidentally dunked a few times. In modern terminology it’s called ‘tea bagging’ and the Derwent River was icy. The Duke was not impressed. 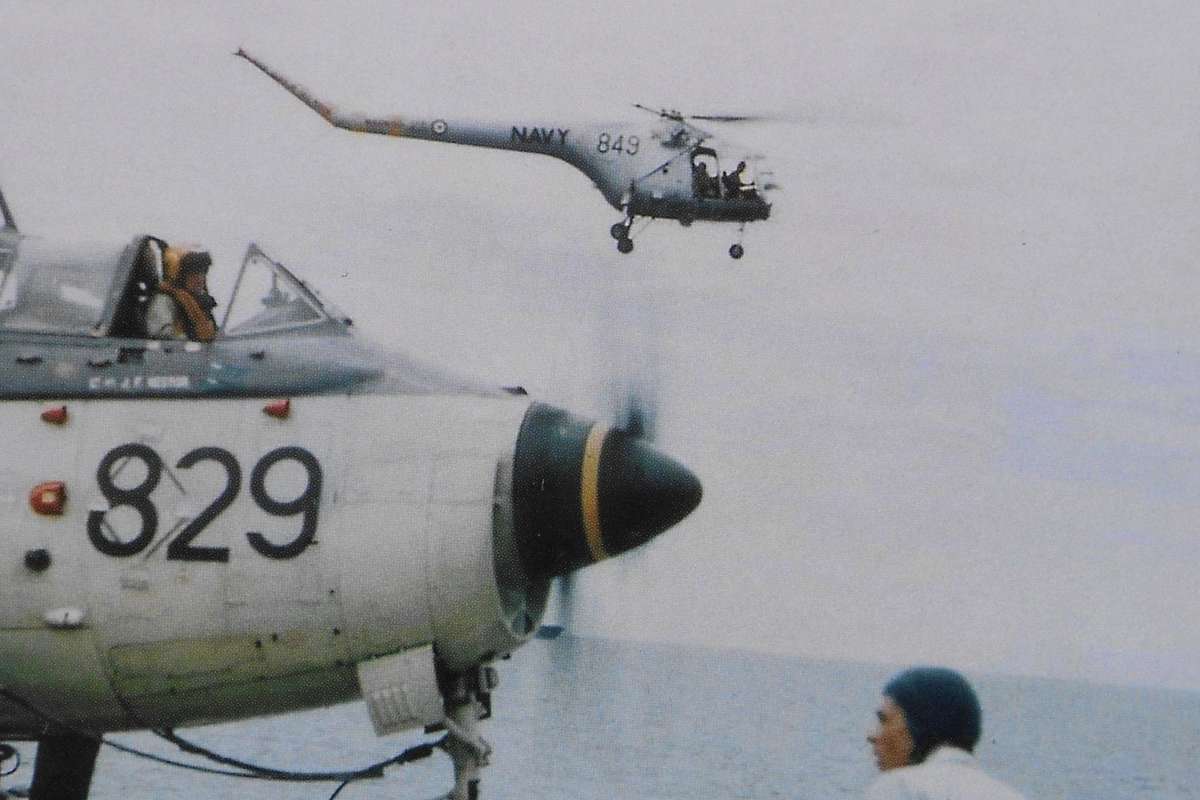 Sycamore 849 – XA220 – which is in ‘Plane Guard’ position during catapult launching. It was one of the original three helicopters transported by ‘Vengeance’. It may be Garth seated in the cabin doorway of the Sycamore.

One notable transfer in the SE Asian Sea, we spent half the night preparing ‘Pedro’ placing seat covers onto the canvas stools in the vast passenger compartment that was my workplace. Our mission was to transfer the new British Admiral from Melbourne to his Flag Ship HMS Victorious. I gave instructions to the Admiral regarding alighting procedures, mindful of his tallness and his brand new Admirals cap, and that the clearance of the rotor blade in front was only six feet. When we landed on Vic’s flight deck the whole ship’s company were on deck to welcome him, dressed in whites and the band playing, the captain and the senior officers were in front of the crew. The Admiral stepped down from ‘Pedro’ placed his cap on his head and started to walk forward. Somehow I managed to get unbuckled and running after the Admiral grabbed him to a standstill, as I held him I pointed to the almost invisible rotor blade inches away from decapitating him! I then directed him to a safe passage.

As we took off in front of both crews of the Victorious, and R21 Melbourne which had drawn nearby to farewell our guest ‘Pedro’ (crews nickname for the Sycamore), at that critical moment “farted” with a momentary loss of power. We used what height we had gained and the fact that the Victorious was two decks higher than R21, to flop back onboard. My log book indicated a flight of 15 minutes but does not register the fact that their new Admiral could have been short-lived.

One other incident that comes to mind was the mail deliveries. ‘Pedro’ was full of postal bags. The deliveries took ages as the ships were dispersed all over the ocean, it was dismal day and identifying grey ships in a grey ocean was not easy. However, each ship turned dutifully into the wind and accepted the offered mail without a thought that the brave crew of ‘Pedro’ inhaled contaminates that belched from their funnels. The final bag was delivered and we headed for home, suddenly the sun set and the traditional tropical daylight immediately became night, we were flying without night instruments and the exercise we were doing that demanded blackened ships was in force. As we neared Melbourne she blipped her deck lights for second, fortunately with peripheral vision I sighted her, and we performed the last mirror assisted landing in the world. As we reached Sydney ‘Pedro’ took off with Eck and Jerry, heading for Nowra full of rabbits. Bing and I had to find our own way home. 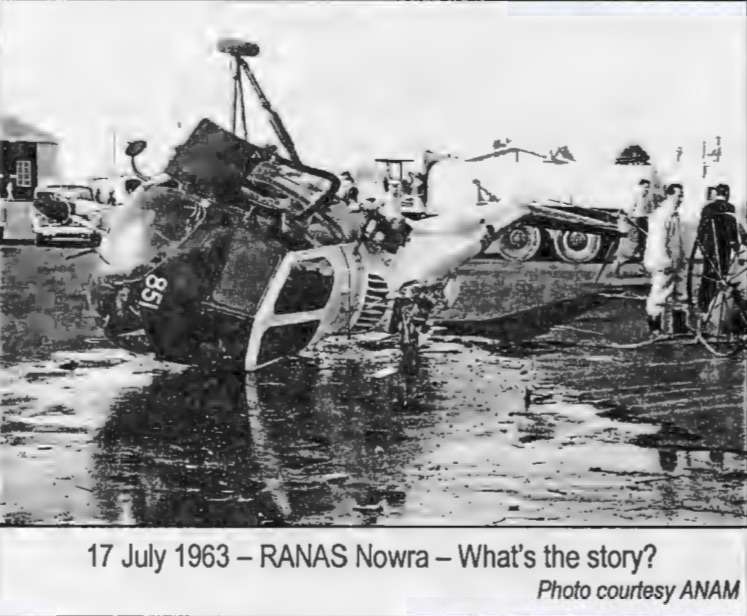 For the story about Sycamore 85I’s unusual attitude, illustrated on page 12 of the current edition of Slipstream, I would suggest that you ask my friend, former Lieutenant Robin Spratt. Unfortunately, I do not have his current address, but if my memory serves me correctly, he made an embarrassing attempt to take off in a Sycamore at about that date.

Your readers may be interested to know that British-designed Sycamore differed from later helicopter types in many respects. Firstly, it was rigged so that the controls were central in cruising flight. Secondly, the main rotor rotated in the opposite direction from that of American-designed machines, e.g. the Wessex. Thirdly, there were none of the sophisticated control interconnections such as those built into later machines; all corrections had to be anticipated and input by the pilot. Fourthly, there was no rotor speed governor, the rotor RPM were manually controlled. Fifthly, the controls were not hydraulically assisted. Finally, some Marks had the throttle mounted on the collective lever, but at ninety degrees to it, so that it was operated like a motor bike throttle, except that it worked in the opposite direction. Motor bike riders were prone to closing the throttle when they wanted to open it.

The implication of all of the above is that to take off, instead of starting with the controls central and correcting from there, it was necessary to move the cyclic back and to the right and apply full left rudder before applying collective. Failure to do so meant that the aircraft attempted to yaw right while moving left and forward as it lifted off, thus tripping over its own left main wheel. Large and rapid control movements intended to correct this movement could result in rotor droop, requiring an increase in throttle movement beyond that available to the pilot without changing grip.

Nevertheless, the Sycamore was successfully operated by at least the RAN, RAF, and some airlines for many years. Problems arose only when former Sycamore pilots who had moved on to other types returned to Sycamores. A series of similar accidents to the one illustrated which occurred at the RAF C.F.S Tern Hill in 1965 resulted in the withdrawal of the Sycamore from RAF service at that time.