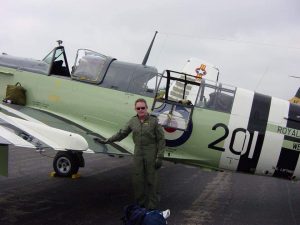 Doug Purvis joined the RAN on 21 May 1972 and was appointed to the Supplementary List as a Midshipman, to undertake RAAF Pilot’s Course No. 86. After serving at HMAS Cerberus for initial-entry training he joined RAAF Point Cook for No.1 Flying Training School, followed by RAAF Pearce for No.2 Flying Training School. Ab-initio flying was performed in the CAC Winjeel and Doug earned his ‘Wings’ in the CAC Macchi on 13 September 1973.

Upon posting to HMAS Albatross, he joined VC851 Squadron to complete Grumman Tracker OFS. During 1974 Doug undertook two months seamanship and aviation training in HMAS Melbourne and he re-joined VC851 where he not only qualified on the S-2E Tracker but also on the Hawker-Siddeley 748 turbo-prop. His first operational posting to VS816 occurred in October 1977 where he flew the S-2G Tracker, replacements obtained after the December 1976 arson attack on the Tracker squadrons at HMAS Albatross.

Whilst in VS816 Doug flew from HMAS Albatross, embarked with the Squadron in HMAS Melbourne and was part of VS816 DETDAR (Detachment Darwin), carrying out daily flights for Operation SEAWATCH, which was the patrol of northern-Australian waters for approaching Vietnamese refugee boats. According to Doug’s log books, the longest single sortie he performed on SEAWATCH was a gruelling 6.7 flying hours on 28 April 1978.

When posted back to HMAS Albatross in November 1978 Doug resumed flying with VC851 as well as performing instructional duties in the Tracker Simulator. Most likely the highlight of Doug’s military flying career was his posting in January 1982 to RAAF East Sale for Flying Instructor’s Course at the Central Flying School followed by instructor’s duties at No.1 Flying Training School, RAAF Point Cook.

Doug returned to HMAS Albatross in January 1983 to an instructor’s role in the Tracker Simulator Complex. Between this time and his eventual discharge in October of the same year, Doug performed supplementary duties as the Museum Officer where he indulged his passion for heritage aviation, particularly with the two Fairey Firefly aircraft which were Museum exhibits at the time. Doug’s naval flying comprised over 2,500 hours, with almost half of that being as ‘pilot-in-command’.

Doug set his course for a career in commercial aviation, and while engaged as a Jindivik pilot at the Jervis Bay Range Facility, he studied for and gained his Air Transport Pilot’s Licence qualification. In June 1987 Doug commenced employment as a Boeing 767 Second Officer with Qantas Airways. He flew the 767-200 and -300 for a total of fourteen years, gaining his Captaincy in 1998. Conversion to the Boeing 747-300 occurred in 2002 and Doug captained that type until his retirement on medical grounds in 2008.

Concurrent with his Qantas flying career, Doug engaged in the RAN Reserves in August 1992, remaining on the Reserves List until his 65th birthday in 2019. During that time Doug had a diverse range of employment, including C-47 Dakota pilot with the RAN Historic Flight and as co-ordinator of the Naval Aviation Prospects Scheme conducted by the Training Authority-Aviation for senior high-school students.

Doug’s most influential and successful Reserve position was as Course Officer for midshipmen aspiring to be Naval Pilots and Aviation Warfare Officers. These young officers, referred to as Naval Officers Year One (NOYO’s) spent half of their first year in the Navy, and then a month of each subsequent year, at HMAS Albatross undergoing Fleet Air Arm familiarisation training, including basic flying skills, before completing their chosen degree courses at the Australian Defence Force Academy.

The debilitating condition that caused Doug to take early retirement from Qantas worsened as the years went on, to the point where his devoted wife Julia became his full-time carer. Doug succumbed to complications caused by his illness on 8th January this year, leaving behind Julia, his two sons Daniel and John, and two loving granddaughters. During his life Doug forged many close friendships and associations with people in the worlds of military, airline and historic aviation.