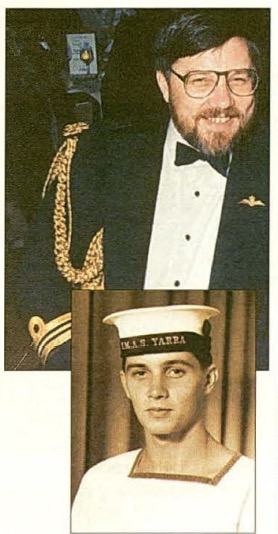 Commander Geoffrey Leonard Willot Vickridge RFD RANR passed away on 8 March 2019 after a struggle with an aggressive form of cancer.  He was laid to rest in Fremantle, WA, on 20 March.

From an early age. Geoff always set his sights on joining the Navy, first joining the Sea Scouts and, when old enough, the Sea Cadet Corps. A fifth generation sailor and the son of the late CAPT Leonard Vickridge. AM, OBE, VRD, RANR who ended his career as the Senior Naval Reserve Officer in WA there is certainly more than a tad of salt water in his veins. Geoff’s brother, LCDR Peter Vickridge, also served in the RAN and is still on the Reserve List.

Outside of his family. Geoff’s great loves have always been the Royal Australian Navy and naval history. He has been the President of the WA Branch of the Naval Historical Society of Australia for several years and had a magnificent library coupled with his large photographic collection.

It was on 1 January 1958 that 15-year-old Geoff Vickridge officially jointed the RAN as a Naval Apprentice. setting off for the unknown on a five-day railway journey which took him to HMAS Nirimba at Quakers Hill, NSW. Commencing as a Naval Artificer Apprentice and six months later as an Ordnance Artificer Apprentice, little did he then know that this was to be the commencement of a 44-year naval career which would see him work in a huge range of categories.

After two years of a fitting and turning apprenticeship, it was apparent that a ‘tiffy’s’ life was not for Geoff. Having been to sea in the survey ship HMAS Worrego and the Battle Class destroyer HMAS Anzac, he transferred to general service,

After training as a seaman in HMAS Cerberus and then in underwater control at HMAS Watson, he saw service in HMA Ships Queensborough, Quiberon, and Vendetta and then in HMAS Yarra in the Far East Strategic Reserve before drafting to HMAS Rushcutter to qualify as a ship’s diver.

From there AB Vickridge returned to HMAS Watson and then returned to sea in HMAS Queensborough to qualify for advance underwater control training. Promoted to Leading Seaman, Geoff then obtained his academic qualifications required for a commission and was promoted to Midshipman on I March 1964.

Returning to HMAS Cerberus for basic officer training, Geoff’s career then took another turn when he was selected for pilot training at RAAF Point Cook where he went solo in a Winjeel aircraft before an eye problem prevented further training.

Determined to remain in aviation, Midshipman Vickridge returned to sea for watch keeping on board the destroyer HMAS Duchess while awaiting an observer training course. Training at the Royal Navy Air Station HMS Falcon at Halfa Malta, Geoff was dux of the course and received the Herbert Lott Prize.

It is interesting to note in his general opinion of MIDN Vickridge, the Officer Commanding Observer School said in part: ‘Vickridge is a keen, smart and outspoken young officer of good bearing who has conducted himself well and who proved to be the leader of his course. He has fairly set opinions and quietly resents criticism while displaying just a hint of ‘lawyerism’ in his attitude. He is nontheless a very likeable man who always tries to give his best and who gamely joins in all squadron and wardroom activities. He should prove to be a most able and useful observer and officer.’ The Officer Commanding Observer School seemingly had young Geoff weighed off!

After completing the Gannet Operational Flying School with 724 Squadron at HMAS Albatross, SBLT Vickridge was posted to the Royal Canadian Navy in HMCS Shearwater, Halifax. Nova Scotia. There, Geoff convened to and flew Grumman Trackers of VU 32 and VS 880 Squadrons from 1965 to 1967 on both coasts of Canada as well as in Puerto Rico, Bermuda and continental USA. 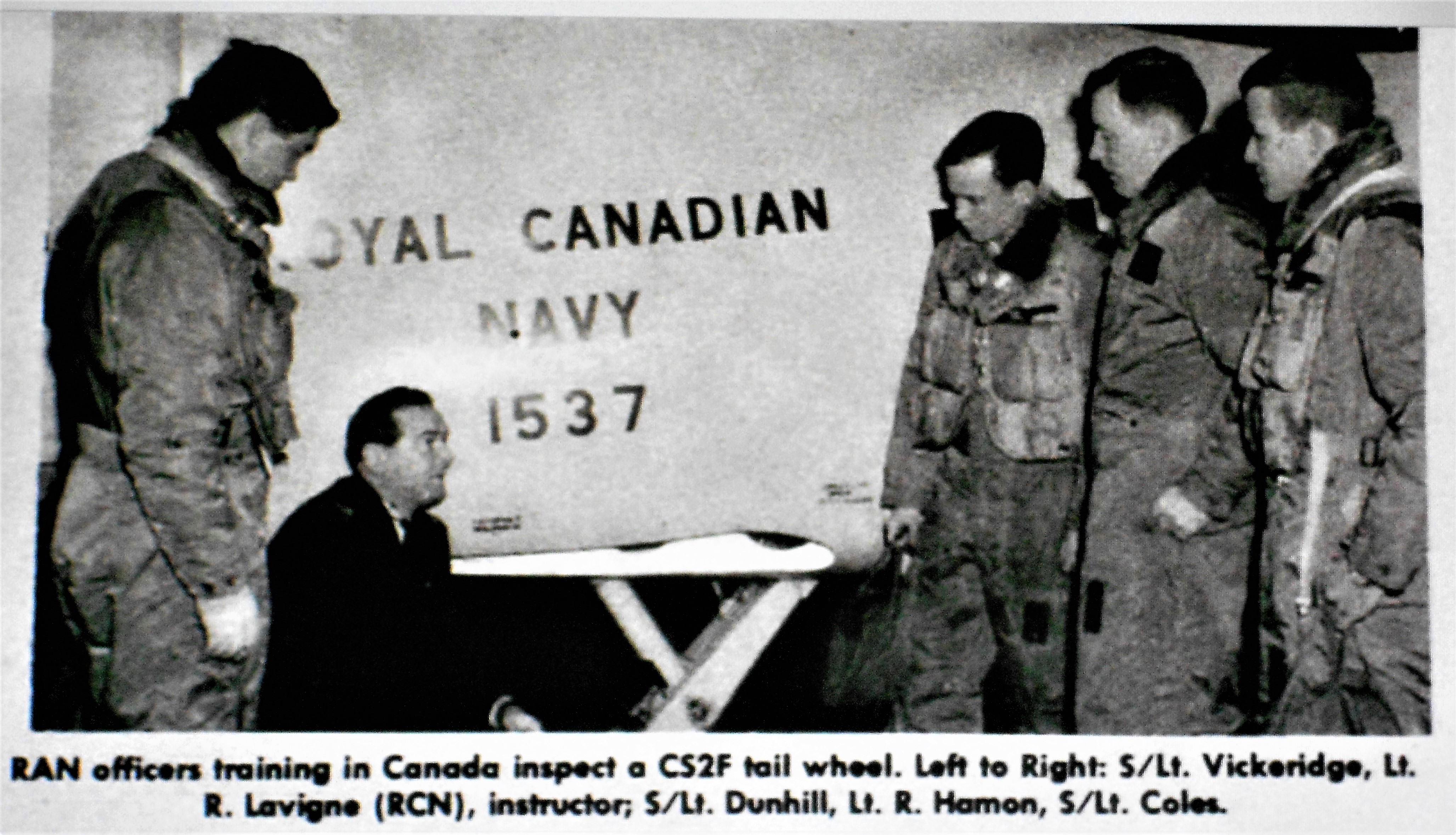 It was whilst serving with the RCN he received accelerated promotion to Lieutenant. Apart from flying in Dakotas, HS748s, and Macchis for relatively brief periods. LEUT Vickridge flew in Trackers for the remainder of his time in the RAN.

In the short span of nine years, LEUT Vickridge served with a fourth navy when he was posted to the United States Navy’s VS 41 and VS 38 Squadrons at San Diego, California, and at sea in the aircraft carrier USS Bennington

Returning to Australian in 1968, LEUT Vickridge was based at the RAN air station HMAS Albatross near Nowra over the next six years  with VS 816 and VSC 851 (Tracker) Squadrons.

LEUT Geoff Vickridge re-embarked with VS 816 Squadron in HMAS Melbourne in 1969 for the Far East Strategic Reserve and multi-nation fleet exercises. At 0315 on 3 June tragedy struck while Geoff’s aircraft was about to start engines, the destroyer USS Frank E. Evans collided with HMAS Melbourne and 74 US sailors lost their lives in the South China Sea. LEUT Vickridge was awarded a RAN Naval Board Commendation for the part that he played in the rescue of the survivors.  He was also awarded a United States Navy & Marine Corps commendation but the RAN refused to recognise it so it could not be presented.  This injustice was finally corrected almost 50 years later, and Geoff was presented with the medal in his hospital bed on 2 March 2019, six days before his death.

On returning to Australia, LEUT Vickridge with three other naval aviators set up the RAN’s first Weapons System Trainer at HMAS Albatross. After that he underwent the Advanced Navigation Course at RMF East Sale before returning to HMAS Albatross as Senior Observer of VC 851, and for a brief period, Commanding Officer.

Geoff embarked in HMAS Melbourne again in 1973 and participated in that year’s RIMPAC Exercise before resigning from the RAN on I March. 1974 to commence legal studies at the university of Melbourne. At that time he transferred to the RAN Emergency List. In 1979 Geoff Vickridge transferred to the Reserve and set up the first Naval Intelligence cell in Western Australia as part of the Fremantle Port Division after a brief period with Naval Control of Shipping.

In 1984 Geoff was appointed to the Naval Legal Panel under the then CMDR George Sadlier and shortly after prosecuted in his first court-martial. Promoted to LCDR shortly after completing the RAN Staff Acquaint Course. Geoff then became an Honorary Aide de Camp to His Excellency Professor Gordon Reid, Governor of Western Australia.

For the next three years he somehow juggled serving as an NID officer, ADC to the Governor and as a legal officer.

Affectionately known in legal circles as ‘Rumpole’, an obvious reference to his wit, booming voice and build, LCDR Geoff Vickridge prosecuted and defended at courts­ martial and Defence Force Magistrates’ Hearings as well as acting as counsel at Boards of Inquiry (BOIs). Both the HMAS Swan and HMAS Torrens BOIs provided great challenges but the greatest unquestionably was the Board of Inquiry into the fire on board HMAS Westralia.

Geoff also served in two DLO billets and relieved the Legal Officer HMAS Stirlingon numerous occasions. His final service at sea was in HMAS Success on her return from the Gulf in 1991. He co-authored the publication A Practical Guide To BOIs.

Appointed Head of Panel in 1995, Geoffrey Vickridge was promoted to CMDR in 1996 and finally retired on 30 April, 2002, the eve of his 60th birthday.   He served as an active member of the WA Division of the Fleet Air Arm Association for many years, and will be sorely missed.

An article from the West Australian Newspaper dated Monday 13 May 2019 can be seen here.