Ken worked as a clerk for Sydney Water Board before joining BATC 2/66 at HMAS CERBERUS in March 1966. He was one of the first batch of Midshipmen to travel to Pensacola, Florida USA to undertake pilot training with the United States Navy (USN)and flew both the T34B Mentor and T28 Trojan aircraft including carrier qualifying aboard the USS Lexington before commencing rotary-wing training.

On return to Australia, Ken completed an Iroquois conversion in 723 Squadron and was posted to No.5 Squadron RAAF (Canberra ACT) for operational training and then served as a UH-1H pilot attached to 9 Squadron, RAAF, at Vung Tau, Vietnam in 1968-69. During this time, he spent time with the 135th Aviation Company (EMUs) made up of personnel from the US Army and Royal Australian Navy.

On return he served in both HT725 and HS817 flying Wessex 31B including time embarked in HMAS MELBOURNE. He married Mary in early 1971 and was selected for the QHI course in the UK. Back in Australia, he was posted to No.5 Squadron as SNO. This time Ken instructed ab-initio helicopter conversions for RAN/RAAF fixed-wing pilots freshly out of No2 FTS.

When the Sea King flight returned from the UK Ken was posted to HS817 as an Instructor and during this period he became Senior Pilot HS 817 on the Queen’s Silver Jubilee Cruise. Whilst in the UK he categorized as an A2 QHI. HC 723 as Senior Pilot for Operation Bursa in Bass Strait was followed by two years in Navy Office, Canberra and his final posting was as a QHI with 5 Squadron RAAF.

After 20 years of service Ken’s first civilian flying was with the media helicopters in Sydney. He then began a long stint as a rescue/medevac pilot with Care Flight, finishing up in Orange, NSW where he met and married Jan.

He also had a short period of “semi-military” flying when sent to Darwin to train Army pilots in the finer points of multi engines, autopilots, and IF.

Ken was a true character who achieved his lifelong dream of flying for a living or, perhaps really, flying for fun! He certainly was one of the good guys and will be sadly missed.

I know you join with us in offering our most heartfelt condolences to Jan, Camilla, Gemma, and Nick.

A Funeral service was held in Orange on Friday 28th October, at which many of Ken’s friends and associates paid their respects to him.  As one of the larger than life personalities of the FAA, he will be sadly missed.

I first came across Ken Vote when I joined VC 724 Squadron in early February 1978 from leave in WA and having just graduated from 101 Pilots Course at RAAF Pearce in December 1977. I’m pretty sure it was the first Friday afternoon after posting into Naval Air Station, HMAS Albatross, and it was the “boggy” pilots’ introduction to the Air Station’s Wardroom life. And, of course, it was a drinking competition between Squadrons and individuals various – upside down from the rafters.

Ken had two speeds in life – fast and faster, and on Friday afternoons from lunchtime it was warp-speed. Similarly, he had two personas – an elegant and sophisticated Naval Officer and a challenging and talented helicopter pilot, the former with subtlety and the latter without but brilliant at both. As always, he was in the thick of things and setting the pace. I immediately liked and admired him.

So there he was on that first Friday afternoon, raucous, rambunctious, and upside-down drinking copious beers and demanding that us “newbies” join him in the rafters!! Then, as now, I couldn’t drink beer (it came up faster than it went down) so my drink of choice in those days, was Bundy and Coke. The challenge was accepted and the longer term results predictable though luckily without any concussion or broken bones. This continued until dinner, at which time the married officers would start to make their way home or would be sitting outside finishing off the last couple of drinks. For the latter that was until the high-pitched scream of their name emanated from the Married Patch, across the Oval, demanding their return home for dinner and to give their wives “a severe listening to!”

Invariably, Ken was one of the last to obey these instructions that only got more threatening with each repetition and much to the merriment of us “singlies.”

Having completed our time being checked out on the Macchi, the three 101 Course Navy graduates departed Nowra in mid-March to join Helicopter Conversion Course 37 with our RAAF colleagues at 5 Squadron, RAAF Fairbairn, Canberra. My next encounter with Ken occurred in April 1978 when he came over from Nowra to recertify the Navy instructors (QHIs) at 5 Squadron in their instructional qualification. Of course, Ken timed the visit to co-inside with a Mess Dinner the night before the check.

Ken was to check out my instructor, John “Bomber” Brown, who was a colleague of Ken’s from Vietnam service with 9 Squadron and now the Senior Naval Officer, 5 Squadron. The topic for checking was whatever skill-set we were up to on the conversion course and it was tactical approaches with quick-stops and tactical departures at maximum load conditions. Of course this was “bread and butter” for Ken and Bomber but one of the more exciting exercises for students.

Following Bomber’s textbook briefing we mounted the Iroquois UH-1B with me in the right seat, Bomber in the left and Ken sitting in a jump-seat in the middle, just behind the lower consol. We flashed up and transited to the practice area south-east of Canberra and picked out a confined area to practice to. Bomber took the controls to demonstrate.

“Right Dowsing – follow me through on the controls.” Off we went from on-top the target confined area; upwind, then left to downwind building up speed to 90 KIAS; downwind checks, around the corner and lined up on the termination area maintaining speed; hard back on the cyclic, lowering of collective (watching the revs and almost full left pedal), rolling off the throttle for autorotation with forward speed rapidly decreasing to zero over the landing area; simultaneous cyclic forward to level the aircraft and rolling on the throttle and engaging the spragg clutch; then descending to land in minimum time. “Your turn Dowsing – normal departure then a tactical circuit to demonstrate the approach, quickstop and landing. Any questions?” No questions, so off we went – all good until it came the time to execute the quick-stop. Far too cautious with the attitude, far too slow with the lowering of the collective and far to slow with the rolling off of the throttle and we went sailing past the termination point at about 40 KIAS!

“Taking over,” yells Bomber, a bunch of expletives, a quick landing in the pad, and a wack to the back of my helmet from Bomber.

“Are you trying to embarrass me as an Instructor?” yells Bomber. “I’ll show you again.” Around we go and just as we land, Bomber gets a wack on the back of his helmet from Ken.

“Bomber, you were useless at these in Vietnam, and you still can’t do them properly; and don’t hit your students!” Less than 30 seconds later, there are two very senior QHIs out of the helicopter, wrestling amongst the kangaroo shit. Opinions sorted, they returned to the rotors-running Iroquois and I was instructed to return us to RAAF Fairbairn. The flight back occurred in silence, the de-brief was minimal, I was deemed competent, and Bomber awarded his recertification. Ken and Bomber had a few beers in the Mess that night (upright as there were no rafters in the Fairbairn Mess), all returned to normal-level thrusting, and Ken flew back to Nowra the following day. Mission completed.

Ken was always immaculately presented. He was obviously and rightly proud of his service as a Naval Aviator and he was a great example to us, whether we were just starting out or had progressed beyond Ken’s rank. I’ll always remember that he polished his Wings such that, while they glistened in the sunlight, there was almost no definition left on the face of them.

The other abiding memory I have of Ken is that while the consummate professional, he always sought the fun in any task and was always ready to do his share of the work regardless of what it entailed. He was a great example.

My final memory is associated with the last telephone call I had with Ken which occurred just after last year’s Anzac Day. “Boong, thanks for getting us the ASM CT/SR. I’ve now got one more medal than my son, and he’s pissed off!” Not sure whether this was true or not but in the photo I received a couple of days later, there he is with his son, laughing, both looking resplendent with their medals gleaming and beers in hand. What a man, what a dad, what service from them both. 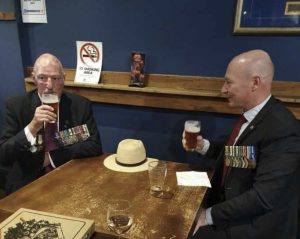