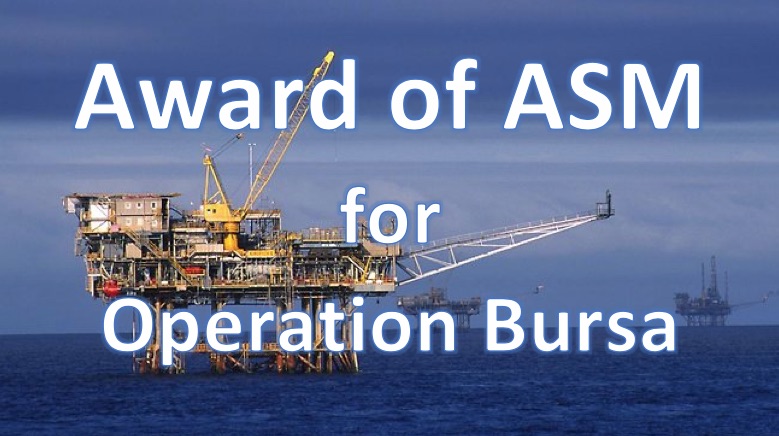 Operation Bursa was the counter-terrorist operation which commenced in 1980 to defend the Bass Strait oil and gas platforms against potential terrorist attack.

Navy provided air support to Special Forces (SF) operations from the commencement of Op Bursa, until the task was handed over to Army Aviation in 1990.  While eligible Army personnel were granted the ASM for Op Bursa, recognition of the contribution of Fleet Air Arm personnel was denied. This situation has now been rectified.

This web page gives readers background information, advice on eligibility of FAA veterans and the process of applying for the award.

Requests to have Navy personnel included under the same guidelines as Army Aviation were denied.  To address this inequity, a small group of dedicated personnel, including CDRE Brett Dowsing and CMDR Paul Fothergill, set about establishing criteria which could validate the award for Navy.  This was ultimately successful, with approval finally signed in October 2020.

The eligibility requirements include Navy personnel, or allied foreign Defence Force members, who:

The 60 consecutive days qualifying period includes deployment, training and while on a reduced Notice-To-Move (NTM) (generally less than four hours) in support of Op Bursa. This award includes all personnel who meet the eligibility criteria.

Periods attached to a ship’s Flight, deep maintenance units not on a reduced NTM, or while on course are NOT counted in the qualifying requirements.

You can read the relevant Regulation here.

You will need to apply for this Award, if you believe you are eligible.

The previous on-line form at this website is no longer available.

Applications must be made by downloading the .pdf form from here, filling it out manually and scanning/emailing it to the Op. Bursa recognition team at op.bursa@defence.gov.au    If you prefer you can post it to the address given on the form.  In either case your application must contain the form and supporting documentation.

Before you do that please read this page carefully and gather your evidentiary documentation to attach to your application.

Verifiable evidence is essential for the processing of any application in order to maintain the integrity of the Honours and Awards system. Applicants are required to provide evidentiary documentation which will show:

To expedite the Awards as much as possible, submissions will be processed in batches rather than as a “job lot”.

The following types of personal documentation are to be provided with your emailed/posted application to support your claim:

Column 1 and column 21 cannot be scanned simultaneously with a standard A4 scanner as they are at opposite ends of the double page.  If using an A4 scanner (rather than photographing the pages), scan the left hand page then the right hand page.  The hours on the left page and right page generally allow matching up of the two scans, but for ease, put a sticky note on the page before scanning (eg 1a, 1b, 2a, 2b, etc).

Maintainers.  Scans of any suitable documentation such as Record of Training and Employment and posting record that indicates qualification and employment on the aircraft type while engaged in Op. Bursa, over the period that complies with the qualification requirement.

Due to the period of time under consideration, Navy records may not be readily accessible or contain the required detail, so it is necessary to rely on personal records in the first instance.  This information will be cross-referenced with any available Navy records. In cases where you don’t have personal records, contact the project team to seek advice.

If you need to access your old records from Defence, email ADF.Records@defence.gov.au with your request.

Quality of scans/photos.  A number of applicants have sent scans/photos that are unreadable.  This has resulted in delays in processing their application as they have had to resubmit (sometimes on multiple occasions) until a version that can be read by the Team is received.  For photos in particular, DO NOT send LO-RES photos.

If your documentation is a very large file, you may need to break it up into multiple emails no larger than 5Mb to prevent the Defence firewall stripping off the attachments.  The Defence firewall also prevents access to cloud storage, so do not send links.

Please spread the word to your mates about the Op Bursa ASM project, where to get information and how to apply. The project team is currently working part time, and will respond to your emails as soon as practicable.

The email address to send your application and supporting documentation is: op.bursa@defence.gov.au

The Team aim to reply to your emails within 14 days, so if you have not received a response within that timeframe, try again.

The application form can be downloaded here:  Application Form