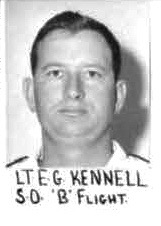 Edward George Kennell was born on 10 August 1936, at Cairns in North Queensland. He enlisted in the Royal Australian Navy (RAN) at Brisbane on 22 January 1954 for six years – dated from 10 August 1954 at age 18 – his employment at the time was listed as stockman. Drafted to HMAS Cerberus (Flinders Naval Depot) at Crib Point, south of Melbourne, he commenced his basic training as a Recruit Seaman on 26 January 1954.

Having progressed through basic training Kennell was rated Ordinary Seaman on 22 August 1954. In November of that year he applied for a transfer from General Service to the Fleet Air Arm. After completing the aircrew selection tests he was rated Provisional Naval Airman (Aircrew) on 04 January 1955, before being posted to RAAF Uranquinty in April to join the Basic Flying Training School.

The training at Uranquinty involved flight theory, navigation and basic airmanship with flying lessons in Tiger Moths. The next step involved the more powerful Wirraway a dual seater training aircraft, enabling trainees to commence advanced flying exercises. It was around this time that Kennell decided against becoming a pilot, as he applied for a transfer to an Observers Course. After passing the necessary evaluation tests on 11 November 1955 he was posted to HMAS Penguin to await the next training opportunity.

On 04 December 1955, Kennell was promoted Midshipman and drafted to HMAS Albatross, the Naval Air Station at Nowra south of Sydney, where he arrived on 06 December. After an introductory course, he transferred to HMAS Cerberus for Divisional Officers’ training before returning to Albatross where he began a 12-month Observer Training Course.

There is no mention of trainee Observers being attached to specific squadrons, but the course involved a good deal of flying in the C-47A Dakota ‘flying classroom’ and other aircraft on day and night-time exercises – involving navigation, photography, radar and sonar buoy plotting. This was a busy time as the RAN set high standards for its Observers. Having successfully completed the course on 22 November 1956 Kennell was promoted Acting Sub Lieutenant (O) and granted a 7-year Short Term Commission.

After completing his Observers course, he spent a short period with 851 Squadron for work experience. On 23 February 1957 Kennell embarked on SS Arcadia for the UK, upon arrival he began a specialist Observers night-fighter training course. On completion he was assigned to 724 Squadron, a fixed-wing training squadron based at Nowra. In August 1957 he participated in the No.1 Night-Fighter Course, flying two-seater, radar-equipped DH Sea Venom aircraft. As some of Kennell’s Service Records are faded his movements at this stage are difficult to follow – but indicates he was promoted Sub Lieutenant (O) on 23 November 1957.

Over the next few years Kennell served as an Observer variously with 724, 808 and 805 Squadrons, the latter two being front-line Sea Venom squadrons that embarked on HMAS Melbourne, joining allied Far East Strategic Reserve & SEATO exercises in SE Asia and the Pacific. On 22 September 1958 Kennell was promoted Lieutenant. In 1959 he joined 724 Squadron at Nowra for a short period before being appointed to 816 Squadron, the front-line Fairey Gannet squadron specialising in anti-submarine work.

Between 1959 and 1963 Kennell was posted variously to 805, 724 and 816 Squadron occupying senior positions, including several embarkations on HMAS Melbourne doing South East Asia duties. On 02 June 1963 Kennell was granted a Permanent Commission, followed by an appointment as Executive Officer of the destroyer/anti-submarine frigate HMAS Quiberon prior to her decommissioning; returning to 724 Squadron at Nowra as Senior Observer in July 1964.

Lieutenant Kennell re-joined 816 Squadron on 25 October 1965, and because the strategic situation in SE Asia had deteriorated, Sea Venoms fighters were added to 816 forming a ‘B’ flight. 816 Squadron embarked on HMAS Melbourne at Jervis Bay on 19 February 1966, sailing for SE Asia for SEATO exercises and escort duties with HMAS Sydney. During flying operations in the Sulu Sea (in the Philippines), at about 3 pm on 28 April 1966, Sea Venom WZ900 touched down on Melbourne’s flight deck. It engaged No 2 arrestor-wire which broke during pull-out, allowing the aircraft to race unrestrained along the flight deck. Because the Sea Venom had insufficient speed to take-off it drifted over the ship’s side before crashing into the sea.

The Pilot of the Sea Venom Lt. Da Costa and the Observer Lt. Kennell were both highly skilled aviators. As the aircraft approached the brink of the flight deck Lt. Da Costa called ‘eject’ making a successful low-level ejection – and to be rescued soon after. It is thought that Lt Kennell ejected just as the aircraft hit the water. An airborne Wessex air-sea-rescue helicopter was swiftly on the scene, and realising Lt. Kennell was injured a diver leapt from the helicopter into the sea, but Kennell had disappeared. Despite great efforts no trace was found of him, and the search was eventually abandoned in the heartbreaking realisation he was lost at sea.

Further details of the accident that claimed Lt. Kennell’s life can be found here.

In 2018 the HMAS SYDNEY & VLSV (Vietnam Logistical Support Veterans) Association held a Dedication Service at the Naval Association Club, to veil a memorial plaque in memory of the late lieutenant Edward (Ted) Kennell. Senior officers and a chaplin from HMAS CERBERUS attended, together with a large contingent of South Vietnamese armed forces veterans wearing their uniforms of their respective units. 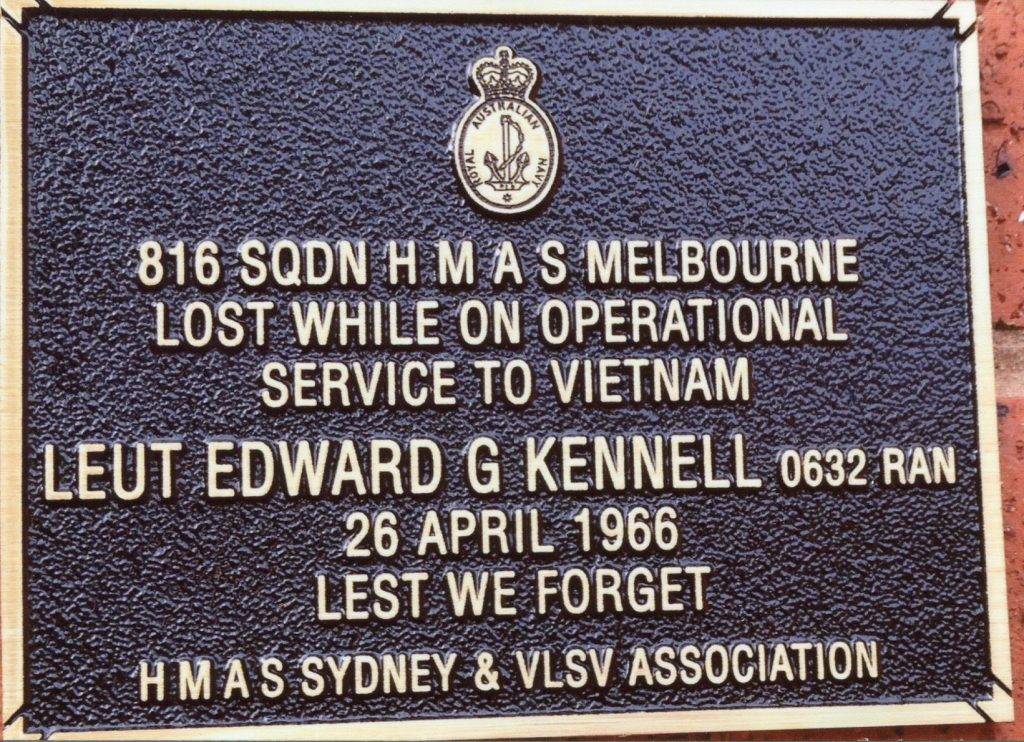 The Service was held because at the time of the accident HMAS Melbourne was on operational service engaged in FESR patrols along with the RN. She was despatched from these operations to rendezvous with HMAS Sydney to provide anti-submarine and air protection for Sydney as she approached Vietnam. Because the accident occurred during the transit phase between the two areas of operation, Lieutenant Kennell is not officially recognised for this operational service.

Dr John Carrol (a former serving officer and member of the HMAS Sydney and VLSVA) has for a long time been attempting to have Lieutenant Kennell’s name added to the National War Memorial Memorial Wall. A photo of the plaque is shown right.
x
Compiled by Kim Dunstan with references from:
National Archives of Australia
AWM: HMAS Melbourne reports of proceedings
ANL Trove newspaper archive
Fleet Air Arm Museum, Nowra
The HMAS Sydney Association (formerly the HMAS Sydney & VLSVA)
Roll of Honour