Douglas Hamilton Saunders was born on 11 March 1930 in Brisbane, QLD. On 3 February 1948, at Brisbane, Saunders enlisted in the RAN for 12-years as a Recruit Naval Airman and was posted to HMAS Cerberus (FND) at Western Port Bay, near Melbourne (official number A35776), to undertake basic training and be assessed for further training as aircrew.

In line with the procedure at the time, Saunders was drafted to RAAF Point Cook Air Training School on 5 October 1948 as a Probational Naval Airman (P), to begin the process of learning to fly. This involved both flight theory and practical work, beginning with exercises on the Link Trainer and progressing to flying lessons in the DH 82 Tiger Moth. Once sufficient hours flying the Tiger Moth and the required level of expertise had been achieved, he would have commenced training in the more powerful Wirraway aircraft. On 25 January 1951 Saunders graduated from Point Cook as a Naval Airman Pilot 2.

After returning to Cerberus for Divisional Training, Saunders was promoted on 4 March 1951 to Acting Sub-Lieutenant (P) on a Short Term Commission. He was then posted on loan to the Royal Navy Fleet Air Arm (FAA) for advanced training and conversion to front line aircraft. On 31 March 1951 he embarked on RMS Orontes for passage to the UK.

On arrival in the UK on 9 May 1951 he was drafted to one of the Royal Navy’s major training bases at HMS Fulmar in Scotland (RNAS Lossiemouth), to begin his Operational Flying School (OFS-1) ‘strike’ course flying Fairey Fireflies. Then on 20 August 1951 he moved to HMS Gannet (RNAS Eglington in North Ireland), for the next level OFS-2 fighter course, flying Seafires; this included some time doing aircraft carrier deck landings on HMS Illustrious.

On 29 October 1951, Saunders transferred to HMS Siskin RNAS Lee-on-Solent for a short safety equipment and survival course. On completion he embarked on RMS Strathnaver on 22 November 1951, for the return voyage to Australia, disembarking at Sydney on 22 December of that year. After taking leave, he reported for flying duties at HMAS Albatross RANAS Nowra, which was the RAN Fleet Air Arm’s premier base.

Saunders joined 816 Squadron, which formed part of the 21st Carrier Air Group (CAG) on 6 January 1952. The squadron operated Fairey Firefly Mk 5 ‘strike’ aircraft, and Firefly AS6s modified for anti-submarine work. Saunders had received thorough training on the Firefly at Lossiemouth, and had been recommended for this type of aircraft. Because 816 was an operational Squadron new pilots were immediately engaged in rigorous ‘work-up’ exercises to bring them up to front-line standard.

This involved a broad training program with realistic exercises proceeding by night and by day. It was on one of these exercises that Saunders flew from Nowra on a night-time anti-submarine patrol from which he failed to return. His last reported position was south of the coastal town of Moruya.

With the aircraft overdue an intensive search began. Although it was late at night, Air Sea Rescue craft from Jervis Bay were quickly dispatched; and aircraft from Nowra flew a search pattern up to 30 miles out to sea, together with RAAF aircraft. Several RAN ships from Sydney were also sent to quarter the area. The search continued for several days, but no trace of the Firefly or its crew was ever found. 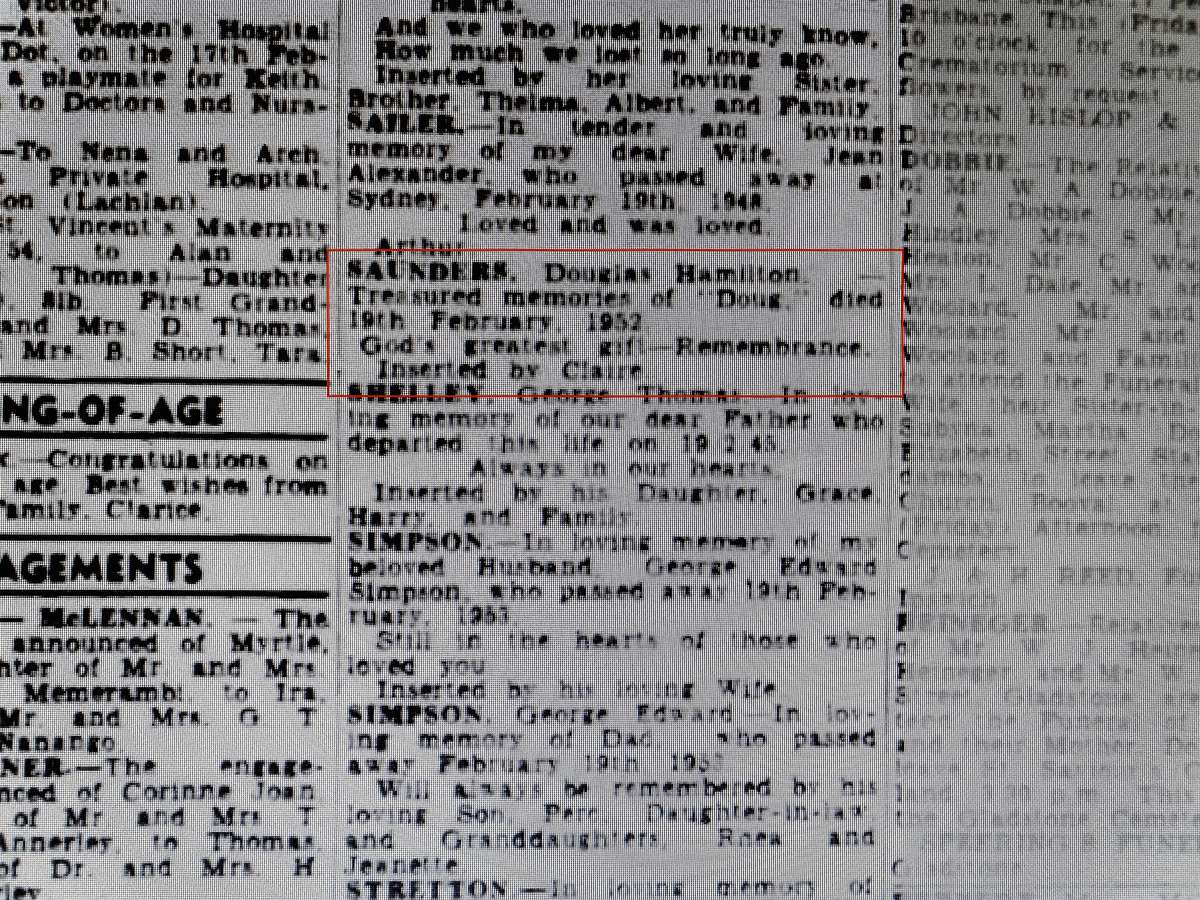