Durrant Phillip Ernest Small was born on 20 June 1930 at Annandale, NSW, son of Mr. and Mrs. Alexander Small of Canley Vale, Sydney. The early life and education of Small remains unclear, but he has been described as ‘having a pleasant personality, very keen at all activities, and a good sportsman. Academically slow but should graduate if he works hard’.

On 30 April 1948 Small enlisted in the RAN in Sydney for 12 years as a Recruit Naval Airman, O/N A36177, and was drafted to HMAS Cerberus (FND) the RAN training base on Western Port Bay south of Melbourne. Here he began the basic RAN recruit training course and was assessed for aircrew. On 27 February 1949 Small was rated Probationary Naval Airman (Pilot) and transferred to RAAF Point Cook, where he joined the Flight Training School to start of learning flight theory, then to begin lessons on the Link Trainer before taking to the air in a DH 82 Tiger Moth basic trainer.

In September 1949 Small took sick leave that resulted in him being assigned to a later class. However, by March 1950 he had resumed flying and had gained sufficient hours flying Tiger Moths to be upgraded to the more powerful Wirraway aircraft. In August 1950 he graduated from Point Cook Flight Training School with his ‘wings’ and was rated Naval Airman (P) IV.

On 3 September 1950, Small returned to Cerberus for a short Divisional Course and was promoted to Acting Sub-Lieutenant on a short-term Commission. The procedure at the time was for RAN trainee pilots to travel to the UK to continue their training with the Royal Navy Fleet Air Arm. On 20 September 1950 Small embarked on RMS Orontes at Melbourne for passage to the UK, arriving on 22 October. He was posted to HMS Fulmar (RNAS Lossiemouth on the Moray Firth in Scotland) to begin advanced training at the Operational Flying School (OFS 1).

RNAS Lossiemouth was one of the major RN FAA training bases and on 25 October 1950 Small began a ‘strike course.’ This involved converting to front line aircraft, such as the Fairey Firefly and Supermarine Seafire; engaging in long range navigation exercises over the ocean, exercising with fleet units, and weapons training. The course was demanding and intensive with day and night exercises.

After completing the OFS 1 course, at Lossiemouth, Small was drafted to HMS Gannet (RNAS Eglington in Northern Ireland) to begin part two of the Operational Flying School (OFS 2) course, which commenced on 31 January 1951. The course focussed on anti-submarine exercises with a major part of the flying taking place in Fairey Firefly aircraft which had a crew of two (Pilot and Observer), and which were equipped for anti-submarine work. Again, the training was rigorous and included learning to do arrested landings and catapult take-offs from an aircraft carrier.

Having finished his OFS 1 & 2 courses, Small was transferred on 14 May 1951 to HMS Phoenix, a shore base at Portsmouth, for a special warfare training course; then at the end of May he moved to HMS Victory College at Portsmouth for a Divisional Course. On 11 June 1951 Small transferred to HMS Siskin RNAS Lee-on-Solent to attend a safety equipment course. Having completed his training in the UK, Small embarked on RMS Stratheden for passage to Australiaon 5 July 1951, disembarking at Sydney on 10 August.

On arrival in Sydney, Small took accumulated leave and then reported to HMAS Albatross RANAS Nowra, the RAN’s main air station and training base. Here he was assigned to 816 Squadron for flying duties. 816 was a front-line squadron equipped with Fairey Firefly AS-5 aircraft, and Small was soon involved in ‘work-up’ exercises to develop his skills as a Firefly pilot – to bring him up to font-line operational standards. 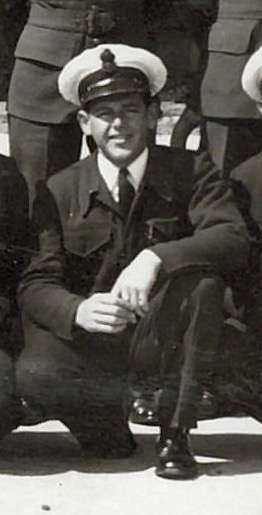 The Fairey Firefly had a crew of two (Pilot and Observer) and could variously carry bombs, depth-charges, or unguided rockets, with some equipped with 20mm cannons. As anti-submarine work was a major part of 816 Squadron’s duties, Small began flying long-distance search patterns over the ocean with an Observer navigating, using sonar buoys to detect submarine noises and dropping marker flares to mark positions. These exercises were carried out during daylight hours and at night time.

It was during one of these night time exercises that Small, while flying his Firefly over the ocean some distance from Jervis Bay, on South Coast NSW, that he lost his life. This happened while making a dummy run at flares floating on the sea – when he failed to pull out of a dive and crashed into the sea. Accompanying aircraft saw wreckage but no sign of the two crew members. Air Sea Rescue launches and aircraft from Nowra continued a lengthy search of the area with other rescue vessels – but no trace of the men was ever found.

On 22 February 1952, A/Sub-Lt (P) Durrant Phillip Ernest Small RAN and his Observer 1, John George Sharpe RAN were declared missing, presumed dead.  Tragically, A/SBLT Small was to be married in the coming weeks and SBLT Saunders, who had been killed in a similar accident some three days earlier, was to have been his Best Man.