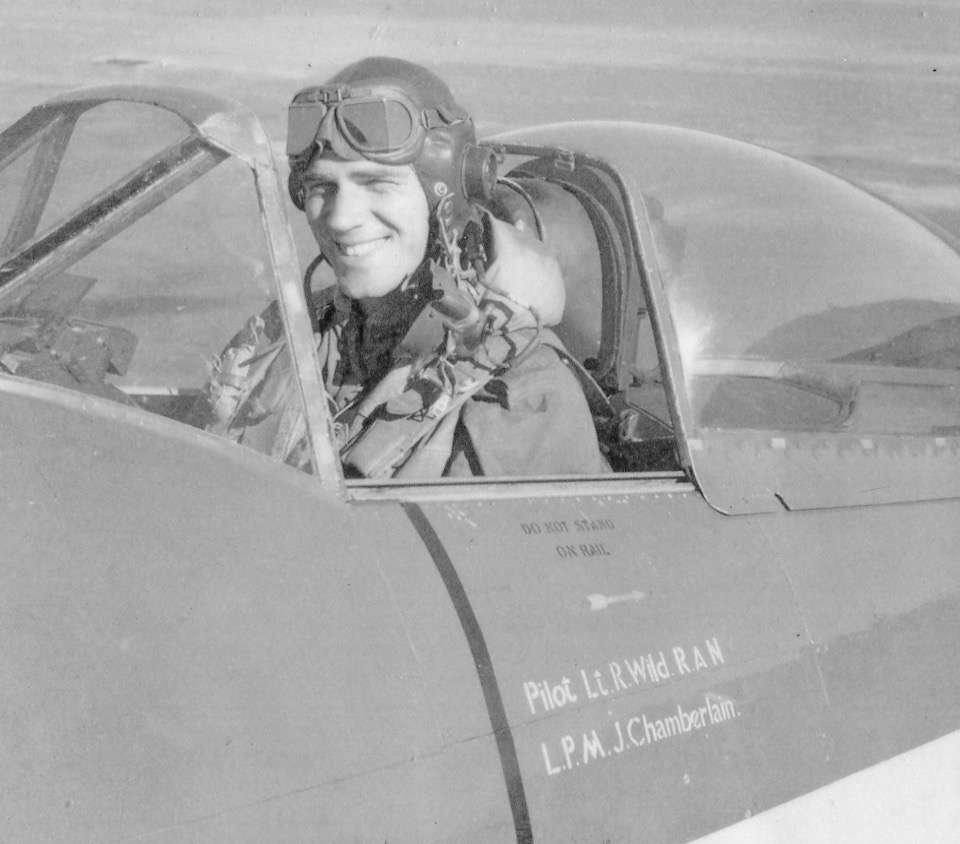 Lieutenant Commander Reginald Albert Wild DFC, RAN lost his life in a Sea Fury near Wagga on 17 May 1953, when his aircraft collided with a Tiger Moth.  He was the Commanding Officer of 850 Squadron, and had previously served in the RAAF during WW2.

An unconfirmed account of the accident was found in the Atherton Aero Club Magazine of Feb/Mar 2014, allegedly from the pilot of the Tiger Moth, Richard Jackson. He was an Air Force Technical Apprentice at the time.

The text of that account can be found here, and reads as follows:

‘The story begins on 17th May, 1953, at the RAAF School of Technical training at an air base just out of Wagga. I had completed my first solo on the previous day and my instructor decided that a circuit or two on this pleasant day would be a good idea. As I began to ‘kick the tyres’ on my DH82 Tiger Moth in preparation for my flight, I heard the rumble of seven RAN Navy Sea Furies cranking up. These aircraft arrived the previous day as one of their ilk was to be married and all of his pilot mates arrived to help with the celebrations. The Hawker Sea Fury was one of the fastest and most effective fighters of its day. The Sea Fury was powered by a Bristol Centaurus 18 cylinder radial engine developing 2480 h.p. and was noted as the fastest propeller driven aircraft at the time. Securely strapped into my aircraft and waiting for a clearance to taxi, I noticed the Sea Furies taxying out for departure. I signalled my instructor who came over to me. ‘It’s going to be a bit crowded up there, isn’t it?’

‘Not to worry’, he said. ‘When they depart they will be heading east to Nowra, their Navy base’. Not being one to mix with all that metal up there, I decided to wait until they had departed. After a short time, the last of the Furies had departed and had turned east so I decided to taxi to the holding point on the grass. On reaching the take off point on the grass field with all of my pre-take off checks religiously completed, I lined up for take-off and waited for the tower. Within seconds the controller gave me the green and soon I was pushed back in the seat as the 135 h.p. Gypsy Major engine careered me across the grass. When flying speed was attained, I gently raised the nose to the heavens and I was flying again.

I recall glancing at the altimeter – airspeed OK and trim set. Then I heard a tremendous noise and almost instantly, I found myself in a left hand spin with the earth circling up to me. Remembering my spin recovery technique: full opposite rudder and forward stick until the spin stops. I don’t recall closing the throttle but I do remember looking ahead and finding the propeller stopped!

Observers on the ground stated that it only took me around five seconds to hit the ground but it seemed much longer. Hitting the ground was clearly a fait accompli as I hit the ground really hard. Although I have no recollection of this, the word got around that one second after I hit the ground I was standing outside the aircraft wondering what happened.

Very soon after, a service vehicle (a baby Austin) arrived at the scene and the officer helped me in and took me to the local RAAF hospital. Replying to my obvious question, the officer told me that I had been hit by one of the Sea Furies as they buzzed the field. In the hospital, my body was beginning to complain about the treatment I received in the crash. I was in severe pain as the doctor tried unsuccessfully to put my dislocated shoulder back into place. I was then put into an ambulance and taken to the Wagga base hospital where they reset my shoulder under a general anaesthetic. Two days later saw me back in the RAAF hospital where I received treatment for my many sprains and bruises. A week later saw me out of the hospital on light duties and in another week I was back in the air.

What really happened? Well it seems that the Navy pilots filed a flight plan to fly direct to Nowra but they apparently changed it just after take-off and instead of tracking to Nowra, they decided to fly to Uranquinty air base and do a ‘beat up’. Uranquinty was a RAAF basic flying training unit some 15 miles from our base. Having done their beat up they decided to do the same at our airfield on the way to Nowra. Now all of these changes were not relayed to the controller and the first time he saw them was when they passed over the fence at fence height doing 300 kts! It was only a heartbeat later when they pulled up into the climb and encountered poor little me!

Unfortunately, the leader of the formation didn’t see me until he was almost on top of me. As the photographs show, other members of the formation saw me in time and began to break away early. The investigations revealed that as the leader hit me, his propeller literally chewed my aircraft into matchwood and in doing so, the reduction gearing on his propeller failed and he lost all power. In an attempt to fly to an almost suitable field a short distance from the aerodrome, he failed to clear some trees and crashed. Unfortunately, he did not survive the accident.

As I indicated, there was not much left of the Tiger Moth. I counted three objects: the slightly damaged propeller which I gave to the officer’s mess at the station, the fuel tank cap and my seat! Incidentally, the attending photos were taken by the trainees who came up to the tarmac area to watch the formation depart. As they flew past, several trainees with box brownies these photos.

As an addendum to this story, I was visiting a friend living near Wagga around four years ago. He told me that he knew the tower controller on that fateful day. We drove out to his farm and met him. We had an interesting chat about that incident in May some sixty years ago.’ 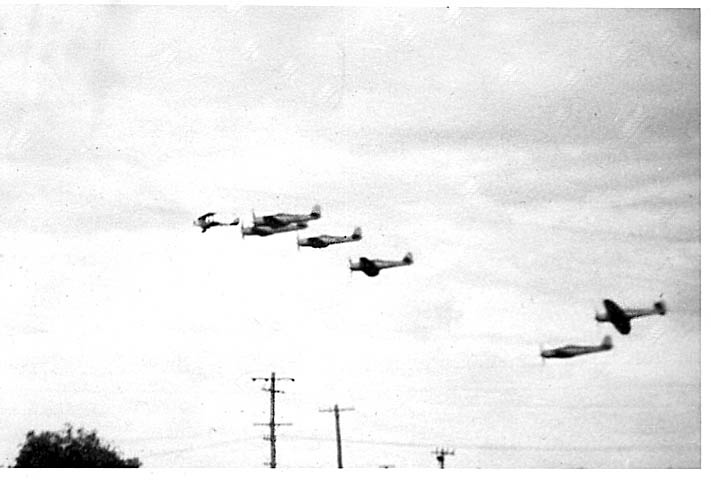 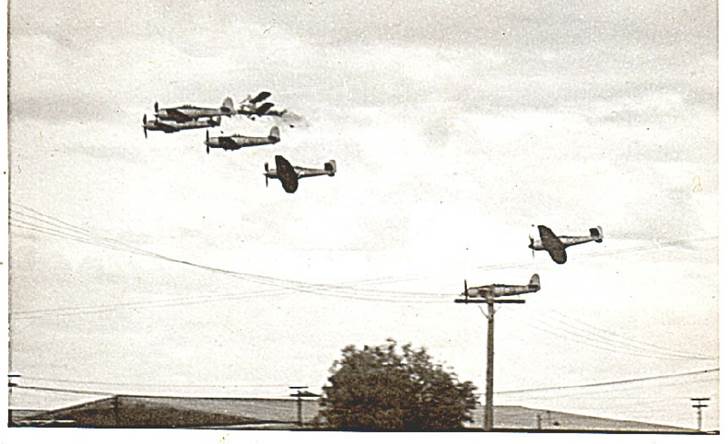 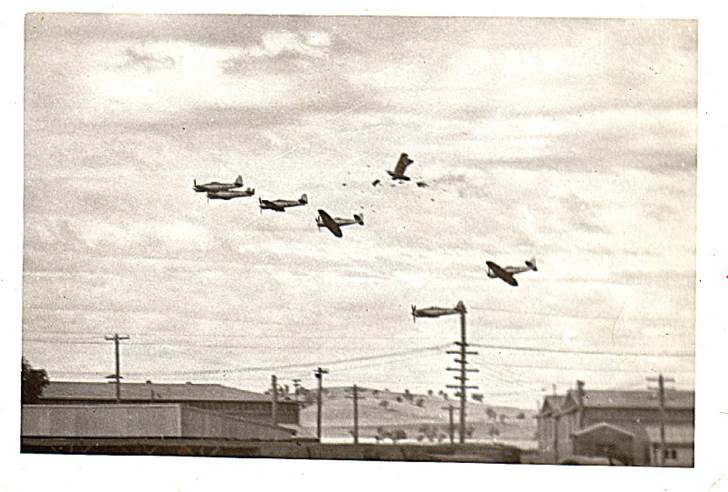 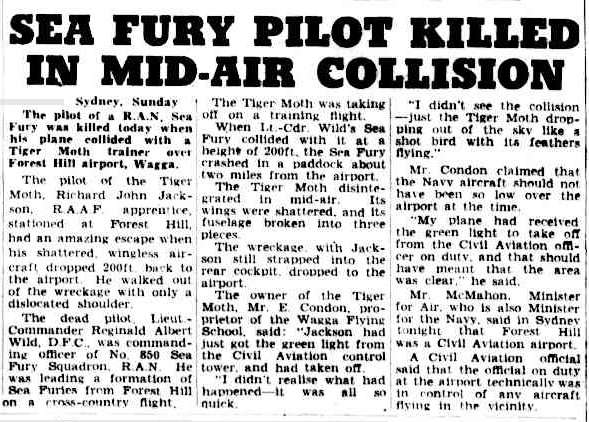 Above: The accident as reported in the Melbourne Argus, 18 May 1953.