The RAN’s 27 Wessex were built at the Westland factory near Yeovil in Somerset and came off the production line at the rate of about three per month. Each aircraft was then flight tested in the UK before being partially dismantled and shipped to Australia, where they were reassembled and test flown again before being assigned to a Squadron.

The material below is a collation of memorabilia on the delivery of the Wessex.

Below: An early photograph of some of the maintenance team sent to the UK in preparation for the introduction of the Wessex.  The top two photographs were taken at the D. Napier & Sons Aero Engine Factory at Action, UK, in 1962.   The bottom photo jumps forward 34 years. Images courtesy of John Selby via Slipstream.

Below.  This 21st Anniversary poster from Westland Helicopters reproduces the Record of Contract for the very first of the RAN’s Wessex (WA-200) which was ‘signed off’ by R.R. Clayton, Westland’s Test pilot.  LCDR John Salthouse accepted the aircraft on behalf of the RAN on 6th September 1962.

The formal handing over ceremony of WA-200 from Westland to the RAN at Yeovil, UK. From left to right are David Collins, Westland Works Director; Commander ‘Freddy’ Sherborne; Mr ‘Ted’ Wheeldon, Westland Managing Director and Captain Ian Purvis. The silver model of the Wessex now resides in the Wardroom Mess of HMAS Albatross. (Westland Image) 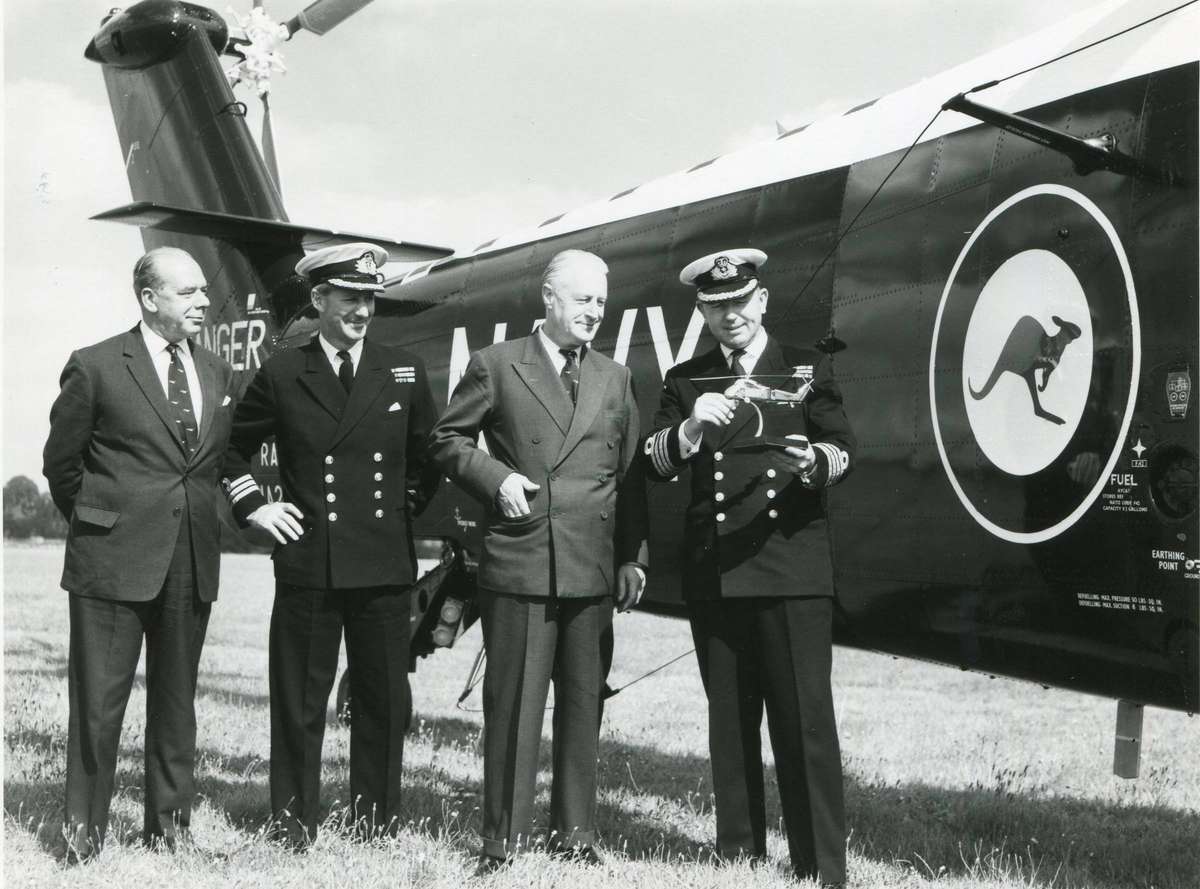 Below.  ‘Before and After’ shots of unpacking a brand new Wessex at HMAS Albatross. They arrived in enormous packing cases of good quality timber that was in high demand for ‘rabbits.’ Inside the helicopter was swathed in large quantities of green plastic.  The packing, although not very substantial, appears to have been effective as there are no known reports of any damage to the new aircraft.  The date of each photograph is not known, although the second appeared in the ‘Slipstream’ magazine of September 1962.  It is likely that the images were of different deliveries as the outfits of the people shown varies from winter to summer rig. (RAN images)

Below:  Another Wessex packing case arrives at Nowra.  It can be seen that the case is marked with the aircraft serial number (in this case WA213) with a suffix “1”.  There’s also obvious gratuitous advice like “Lift and Lower Carefully”!  It is not known how many cases were furnished for each aircraft.

Below:  As one of the local newspapers saw the Wessex…

Below:  The Wessex delivery and assembly as seen by ‘Slipstream’ magazine in May 1962. The caption refers to the previous helicopter buy (the Sycamore).

Note:  This page will be converted to a ‘History in Photographs’ page.  It is currently under construction.

Below: Captioned “Loading crew into Navy Wessex at Mt Murray. Feathertop in the background. These fires were the largest single aerial firefighting operation up to that time and valuable lessons were learnt. January 1985.” This striking photo is attributed to Peter McHugh.

For those who haven’t seen one, this is what a Wessex 31B inflation bag looks like.  Stored in white canisters, there was one on each main wheel – easily removed or installed by simply sliding it into the respective wheel axle and securing it with a pin.  The bag was armed by a master switch behind the pilot’s right shoulder, and inflated automatically if immersed in water (ie. if the aircraft ditched).  They were designed to keep the aircraft afloat long enough for the crew/passengers to escape.   The weak point was where the bag was attached to the canister, which tended to chafe in choppy water. If one bag detached (or burst) the aircraft would still be held but it was upside down under the water. If both bags were lost the aircraft would sink.