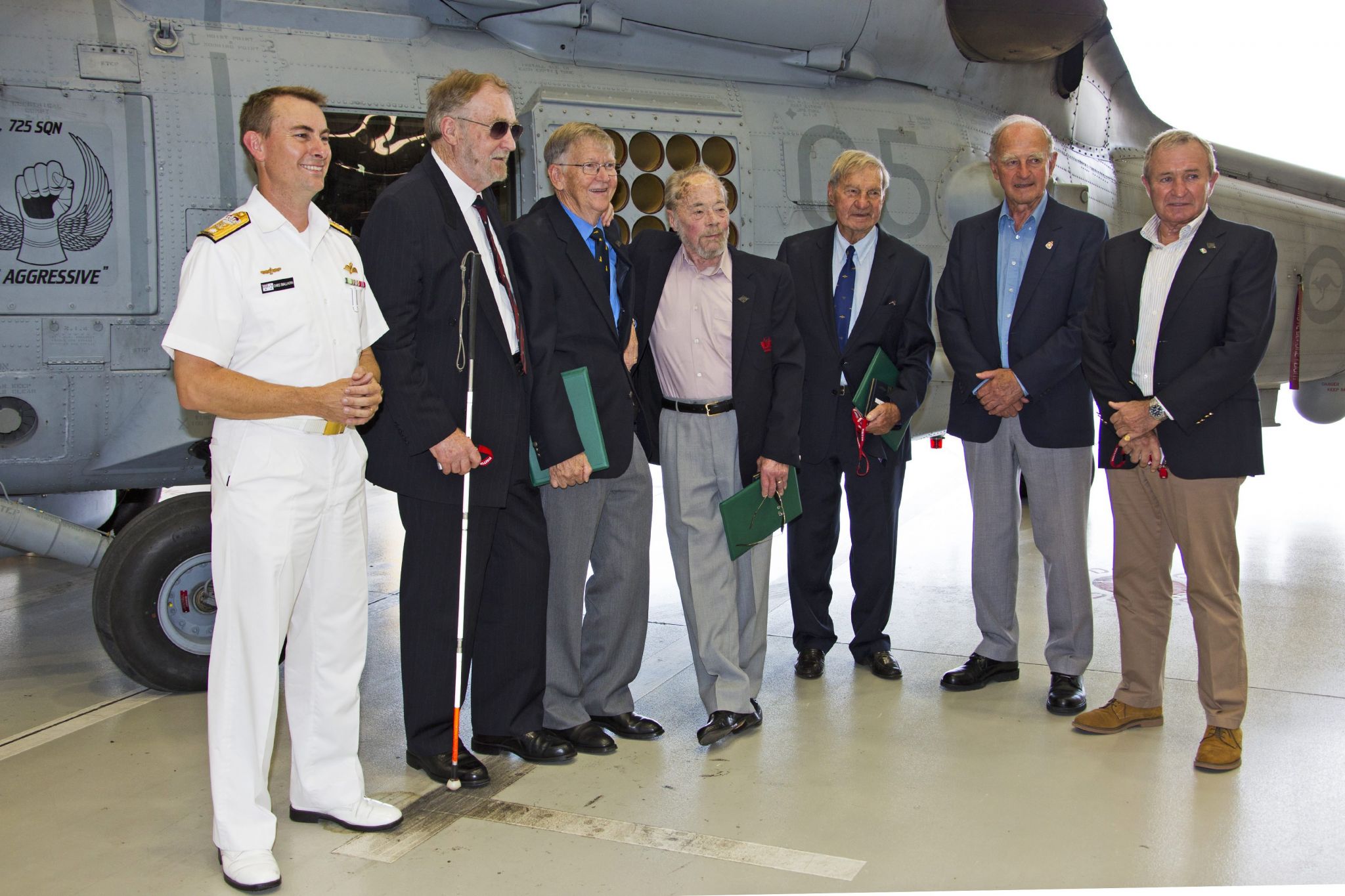 Six members of the first rotation of Royal Australian Navy aircraft to serve in Vietnam have been honoured with the United States Air Medal.
In a special ceremony held at HMAS Albatross, at the new home of 816 and 725 Squadrons, the aviators were presented with their medals by the Commander Fleet Air Arm, Commodore Chris Smallhorn, who paid credit to their service, which ranged from October 1967 to October 1968.

Flying Iroquois helicopters or Hueys as they were known, the crews were from the 723 Squadron, joining the 135th Aviation Company (Experimental Military Unit) and the United States Army Military Assistance Command Vietnam.

The United States Air medal for distinguishing themselves by meritorious achievement while participating in sustained aerial flights in support of combat ground forces in the Republic of Vietnam.

During the period of duty they actively participated in aerial missions over hostile territory in support of operations against Communist aggression.

See your ad here
During all these flights, they displayed the highest order of air discipline and acted in accordance with the best traditions of the service.

By their determination to accomplish his mission, in spite of the hazards inherent in repeated aerial flights over hostile territory, and by their outstanding degree of professionalism and devotion to duty, they have brought credit upon himself, the 135th Aviation Company (Experimental Military Unit) and the United States Army Military Assistance Command Vietnam.

Commodore Chris Smallhorn said it was a historical and memorable event.

“To stand here in front of some of the men who have written the history of the Fleet Air Arm is a honour,” he said.

“You created a legacy and left something very special for the FAA.

“When thinking about what I could say here, one phrase kept coming to mind – Stand on the shoulders of giants.

“You created the legacy which lives on here today.

“It was not just by what you did when you got there (Vietnam) or the illustrious careers afterwards and when you left the service. It was before, during and after in your careers.

“You showed the necessary courage and dedication and service for your country. You stepped off our shores and went and did what was asked.

“It is a legacy that is in safe hands and continues today.”

He said Australia’s first FAA contingent to Vietnam which joined the the experiment flight was a special group.

“It was something special. An alliance that never left go from the end of the Korean War, formed during World War II and part of World War I,” he said.

“We now have an alliance which continues to serve the country. It is a little piece of that history that you wrote.

“You were all 723 men and that squadron is still at the base today. While its role may have changed and perhaps changed dramatically from when you were here, and may be doing different jobs, they certainly have the same fervour.”

Commodore Smallhorne also paid credit to the families and in particular the wives, a number who also attended the presentations, who were left at home when the personnel went off to war.

All six recipients were proud to be recognised for their service.

Flyers honoured to be recognised

Nowra based Neil Ralph went on to become a Rear Admiral and said it was important Australian service is recognised.

“It’s great we have been honoured this way, even if it was nearly 50 years ago. But there are still a lot of other people who should also be recognised,” he said.

“Our teams of maintainers who kept us in the air day after day, should also get recognition. Then you have ships’ companies who should also be acknowledged.

“It is an issue I certainly feel strongly about and I’m working with a group to try and ensure everyone gets recognised.

“It is one thing that still disturbs me.

“Hopefully, in the next year or so we can have this situation rectified.”

“It is a great honour,” Stafford Lowe said.

Now living in Hazelbrook in the Blue Mountains, he said to be recognised was superb and the presentation was a great occasion.

“It is great after all this time to be recognised,” he said.

Vic Battese, who lives in Canberra, was delighted and “blown away” with the whole effort that was undertaken on the day.

“It was fantastic they went to so much trouble to bring us old RAN FAA guys back and honour us,” he said.

“They gave us such a welcome and it was great to see the regard in which they held and still hold what we did.

“Everyone was so welcoming and I was just so impressed that they actually cared.

“To be able to tour the squadron and talk with the current personnel and see the wonderful work they are doing was special. The Fleet Air Arm certainly is in good hands.

“After all these years for the current FAA Commander to take such an interest in us and his genuine heartfelt presentation was memorable.”

Gordon Edgecombe has also returned to live in Nowra and said the group shared some incredible experiences.

“We all went through the same things together,” he said.

“Some of us may not have caught up with each other for 10,15 or 20 years but having everyone back together is just like getting the family back together.

“We were a big family, not only us as flyers but our wives and families. We all went through the same things together.”

He said the veterans were given the opportunity to talk to some of the young, current day flyers who were amazed how much time the crews actually spent in the air during Vietnam.

“I know Vic [Battese] flew for 14 hours and 20 minutes in one day alone in Vietnam. I was in the air for 13 hours and 10 minutes. The young guys couldn’t fathom that. They tell us now days they may not even get that much time in a month let alone a day.

“And we were doing it day after day.”

He said there were big operations where up to 80 slicks [troop transporters] and gunships were in the air at the same time.

“I became air advisor to the US and the scope of the work we undertook and the size of the operations we were involved in was incredible,” he said.

David Cronin, who now lives in Canberra, said being awarded the air medal was “a great honour.”

“It is great to also get everyone together again and catch up,” he said.

Jeff Dalgleish now lives in Sydney and said to be recognised some 49 years later was magnificent.

“It is a great feeling to be recognised. But we must also remember that there was four personnel from our first rotation in Vietnam who didn’t come back,” he said.

Although impressed with the modern day helicopters, especially the new Seahawk Romeo they were able to inspect during their visit, the veterans still say the sound, performance and presence of the Huey takes a lot to beat.

And although there is a lot more sophisticated technology in the modern helos, a few of the flying pioneers would certainly love to “have a crack” at the new aircraft.