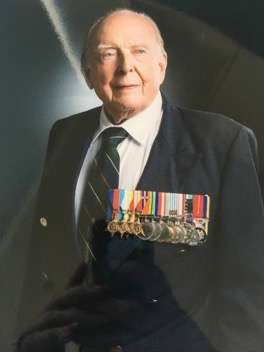 John Stevenson entered the RAN as 13 year old Midshipman at the RAN College at Cerberus. During the second world war he served with the Royal Navy, including in the Atlantic and Indian Oceans and the Mediterranean sea. After being wounded in an air attack he served on HMAS Shropshire in the Pacific Theatre and was present for the Japanese surrender in September of 1945.

At the end of the war he was assigned to POW recovery duties around Nagasaki, where he saw first hand the devastating effects of the atomic bomb dropped on that city.

After the war Lieutenant Stevenson undertook specialist navigation and air direction courses, and served in RN ships in the Indian Ocean, Persian Gulf, Atlantic Ocean and Mediterranean, including active service in the Malayan Emergency. He returned to Australia on HMAS Sydney in 1950 as a brand new Lieutenant Commander.

Promoted to A/Captain in July 1959, he sat on the Board of Inquiry for the Melbourne/ Voyager collision – an unfortunate irony considering the tragedy that was to befall him five years later.

Captain Stevenson assumed command of Melbourne in October 1968.  On 3 June 1969 disaster struck when his ship collided with the USS Frank E. Evans in the early hours of the morning, with the loss of 74 lives.

A joint USN/RAN Board of Inquiry into the tragedy held Captain Stevenson partly responsible stating that, as Commanding Officer of Melbourne, he could have done more to prevent the collision from occurring; however, a subsequent RAN court-martial cleared him of any responsibility. The integrity of the initial Board of Inquiry has since been questioned, particularly as it was presided over by Rear Admiral Jerome King, USN, the officer in overall tactical command of Evans at the time of the collision. Stevenson’s defence council, Gordon Samuels, QC, later Governor of New South Wales, said that he had “never seen a prosecution case so bereft of any possible proof of guilt.”

Captain Stevenson subsequently resigned from the RAN, ending what had been 35-years of distinguished service. He went on to enjoy a successful career working for the Australian Gas Light (AGL) company while the story of his experience of the Melbourne/Evans tragedy was told by his wife, Joanne, in the books ‘In the Wake’ and ‘No Case to Answer’.

He retired from private enterprise in 1987 and resided in the Southern Highlands of NSW until Joanne’s death in 2012. In December of that year, Stevenson received an official apology from the Minister for Defence, the Hon Stephen Smith, MP, in which he states that Stevenson was not treated fairly by the government of the day and the Australian Navy following the events of 1969, and describes Stevenson as ‘a distinguished naval officer who served his country with honour in peace and war’. Stevenson was appointed as a member of the Order of Australia (AM) in the 2018 Australia Day Honour’s List.  He passed away in Sydney on 29 January 2019 at the age of 98.

Below: Before leaving HMAS Melbourne CAPT Stevenson wrote to every member of his ship’s company, thanking them for their Service. A copy of the letter is shown below. 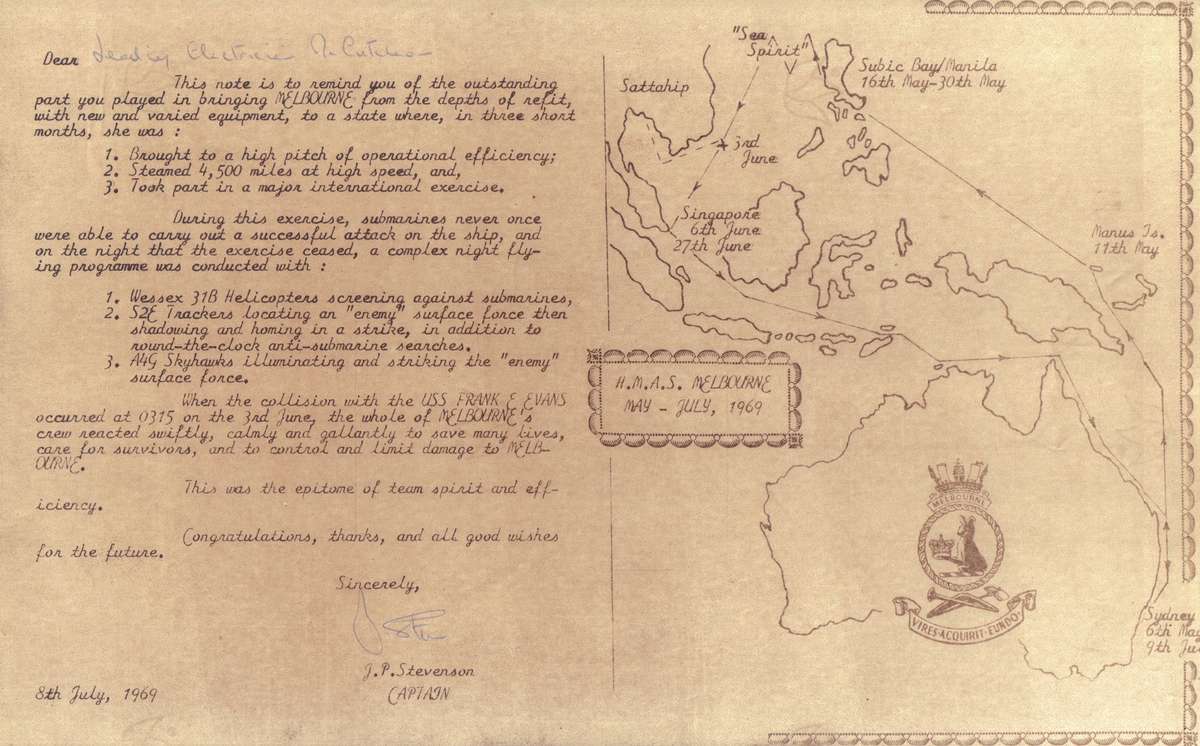