Information on this page was kindly provided by Charles Page.
If you have any more information on Michael Willams, and in particular a later photograph of him, please contact the webmaster. 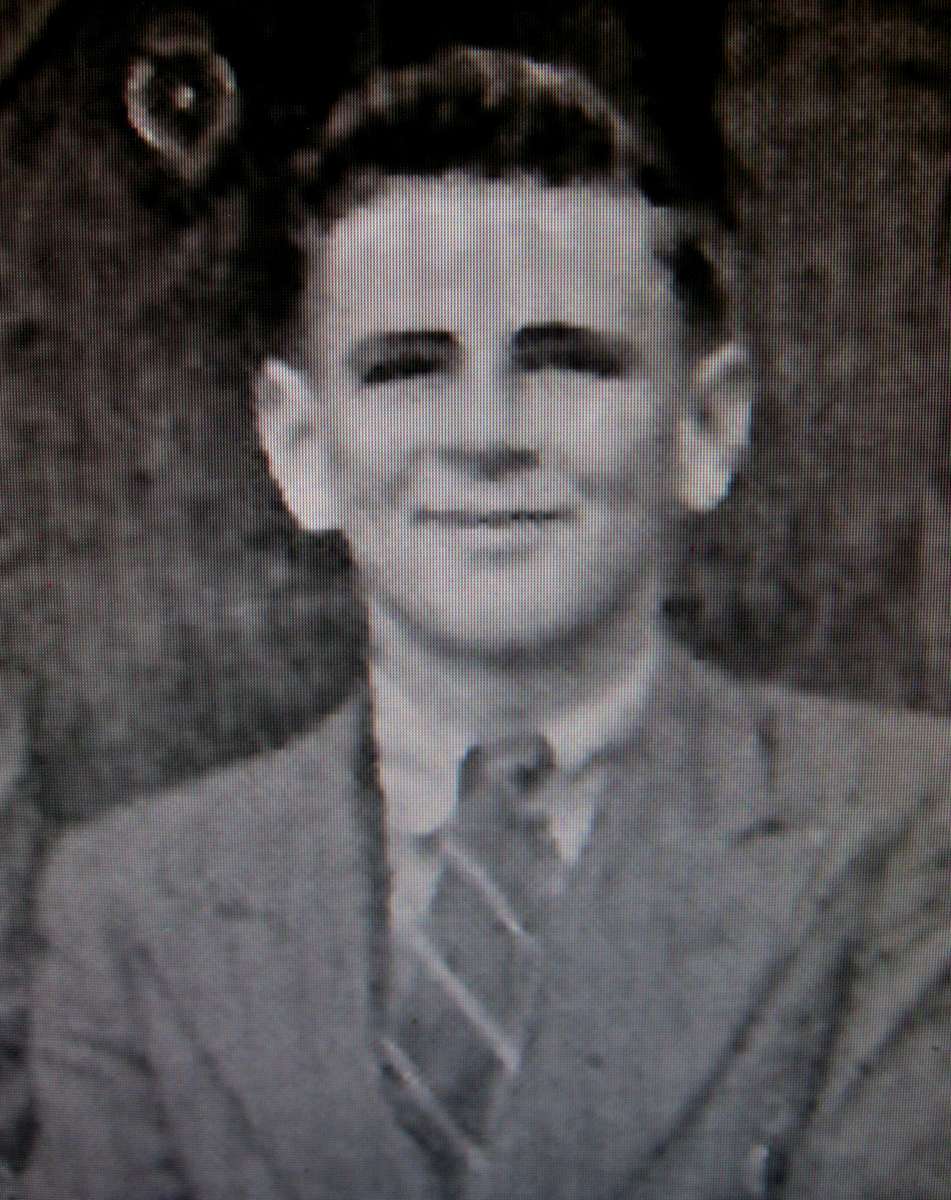 Michael Clarence Williams was the son of Mr and Mrs Percival Clarence Williams, of 25 Patricia Street, East Victoria Park, Western Australia. He attended Christian Brothers’ College (CBC) Perth from 1948 to 1952, passed his junior certificate, and was a regular place winner in swimming and diving.

Michael also joined the school’s No.12 Flight ATC on 15 February 1949, and enjoyed the rifle shooting, and the summer camps at RAAF Pearce. He also took part in the tenth anniversary of the ATC, with a march through the city and a service in St Mary’s Cathedral, with RAAF Chaplain, Father Vawdrey.

On 15 March 1956, Michael enlisted in the Royal Australian Navy for a six year engagement. He was first posted to shore-based HMAS Cerberus for initial training, This was followed by a posting on 25 June 1956, to No.1 Basic Flying Training School at RAAF Uranquinty. But after several hours flying Tiger Moths, Michael found that flying as a pilot was not to be.

Instead he was posted back to Cerberus, then to Naval Air Station Albatross at Nowra, NSW. Meanwhile, Michael married his wife Janet and applied for training as Observer. The RAN was using the RN Fleet Air Arm for training Observers, and so on 1 February 1958 Michael and his new wife found themselves on the SS Strathaird, bound for UK. After disembarking on 14 March 1958, Michael commenced No.33 Observer Course on 28 April. He successfully completed his training and was promoted to Acting Sub Lieutenant.

Michael flew back to Australia on 21 December 1958, and after leave was posted to Naval Air Station Albatross at Nowra. There on 7 January 1959, he joined 724 Squadron, which was equipped with Sea Vampires and Sea Venom FAW 53s. The squadron was tasked with providing night and all weather training, interception practice for radar plotters at HMAS Watson, radar calibration exercises for ships working up, target towing, and mock attacks. Also during 1959, the squadron formed its own formation aerobatic team, The Ramjets.

On 20 May 1959, Michael and his pilot Lieutenant Stanley Carmichael were detailed for a low-level photographic reconnaissance exercise off the south NSW coast. The pair took off from Nowra in Sea Venom WZ909 (RAN code N4-909) and headed out to sea. The aircraft was seen to circle the merchant vessel Komona before crashing into the sea at 1514 hrs, approximately 18 miles east of Ulladulla.

The Komona alerted naval authorities, and made its way to the crash scene, but only the wing tip fuel tanks were recovered. No sign was found of the two crew, and A/Sub Lt Michael Williams and Lt Stanley Carmichael were presumed killed.

Twenty nine years later, on 18 May 1988, the remains of their aircraft were discovered by the CSIRO fisheries research vessel Soela. The wreckage was brought to the surface, and the port wheel cover is now displayed at the Fleet Air Arm Museum, Nowra, NSW. 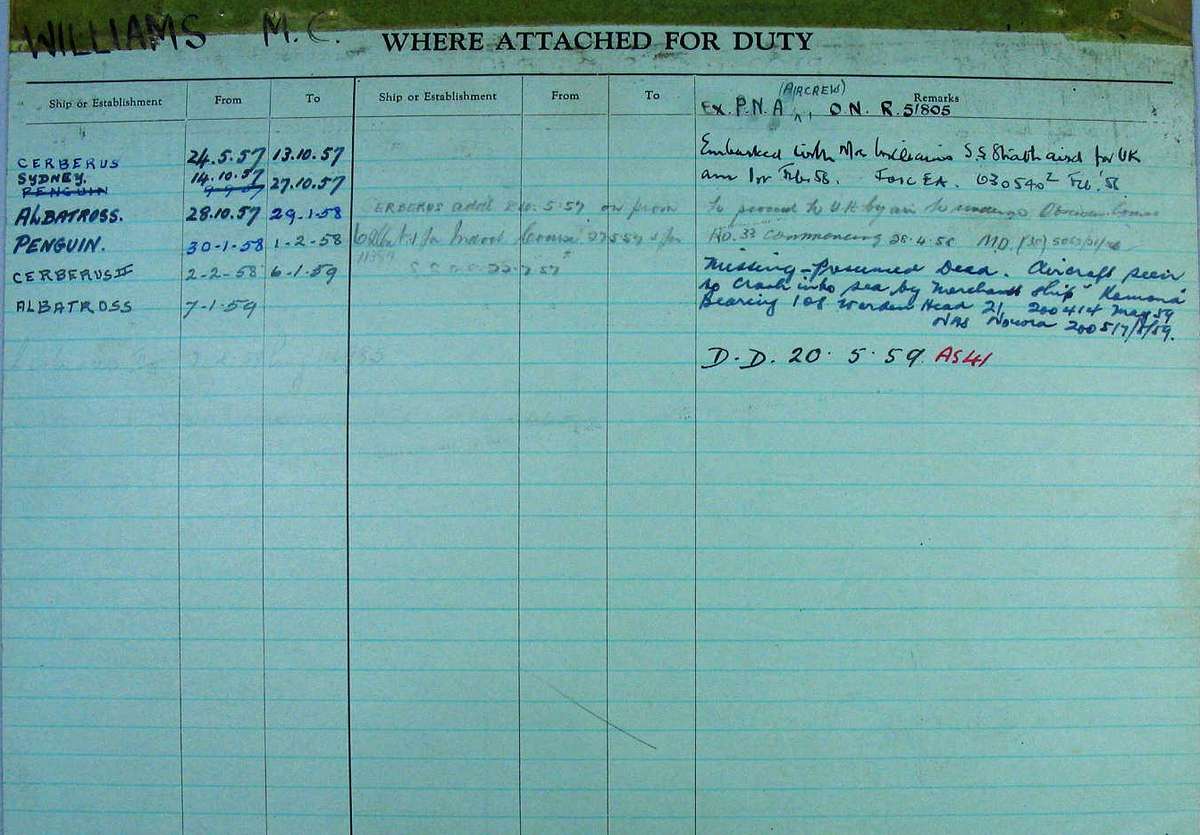 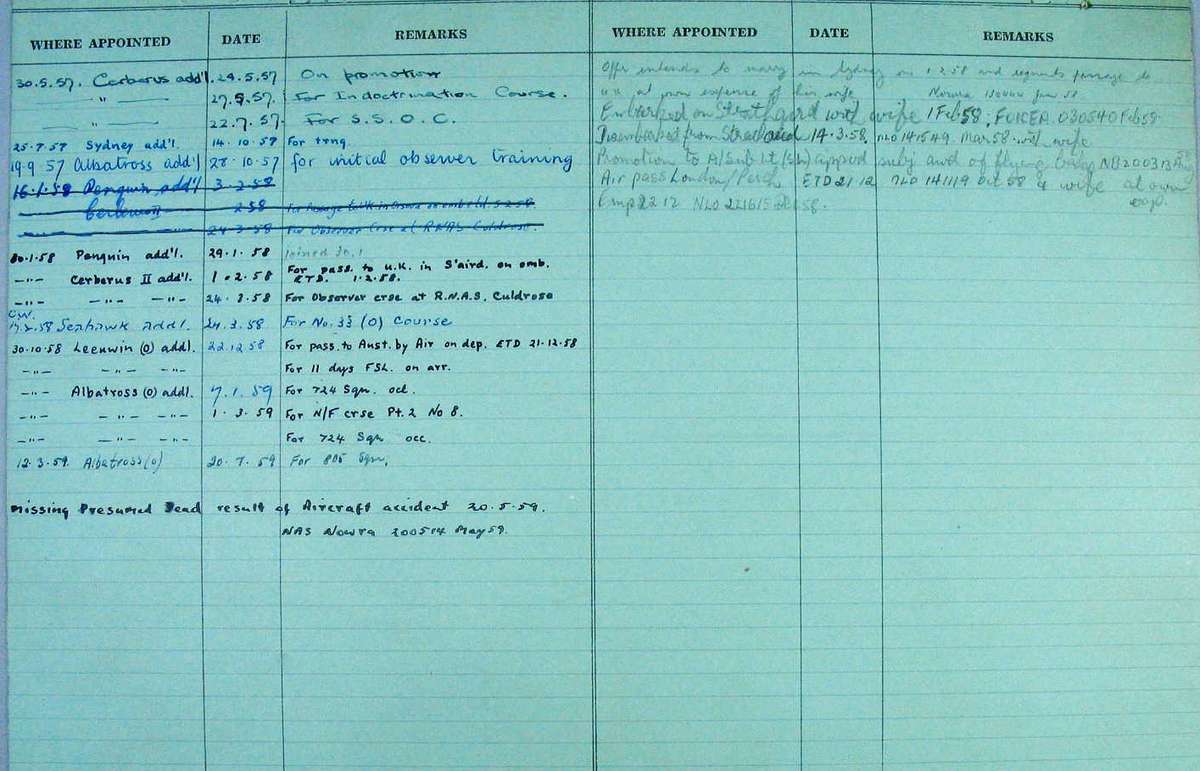 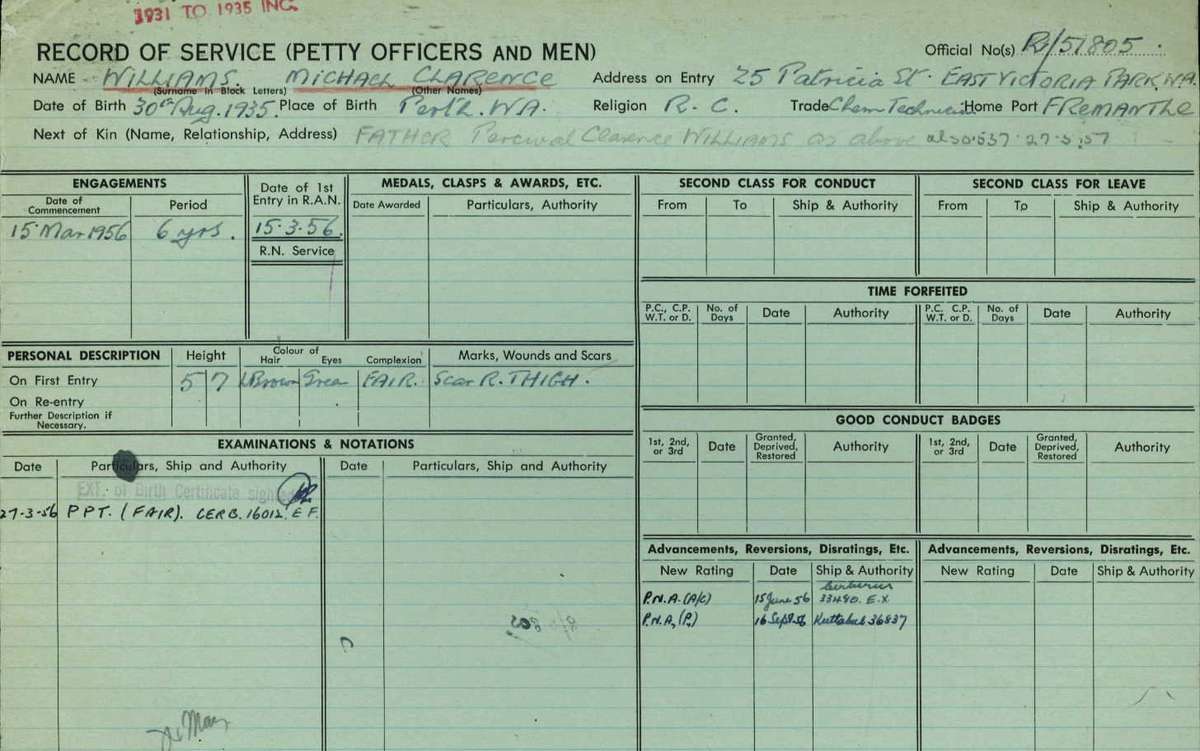 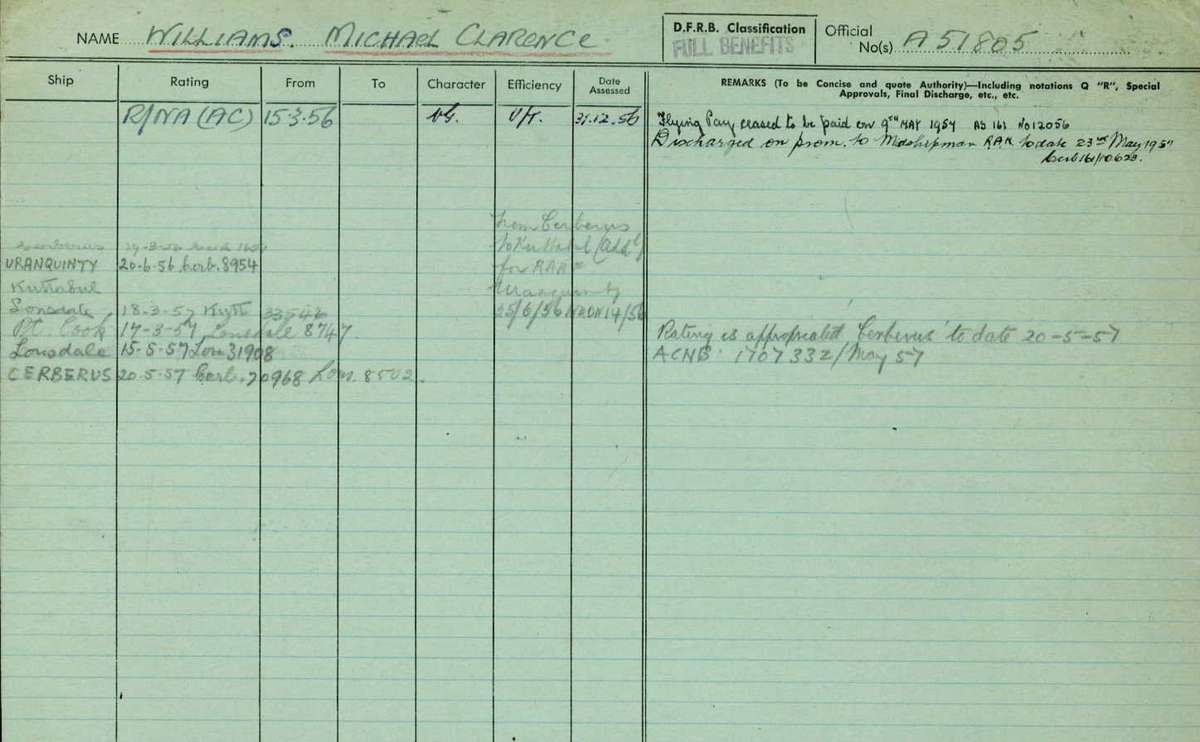 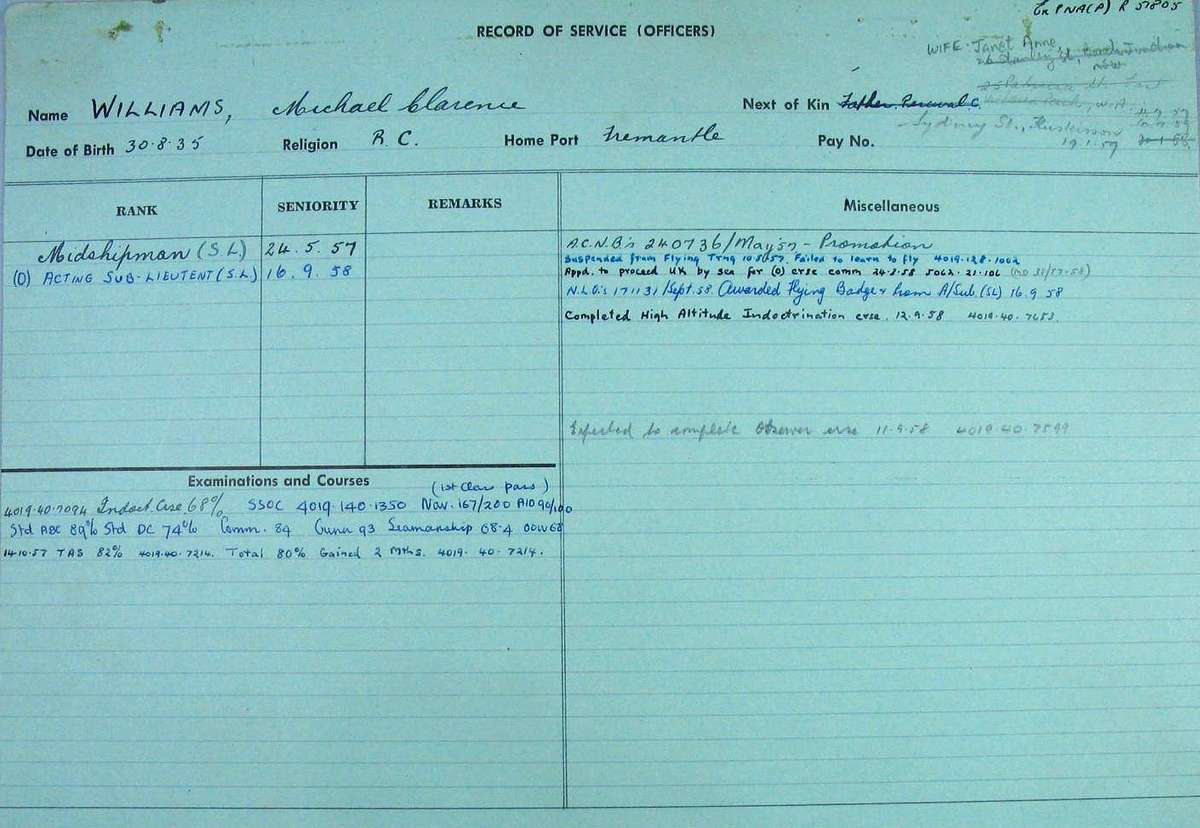 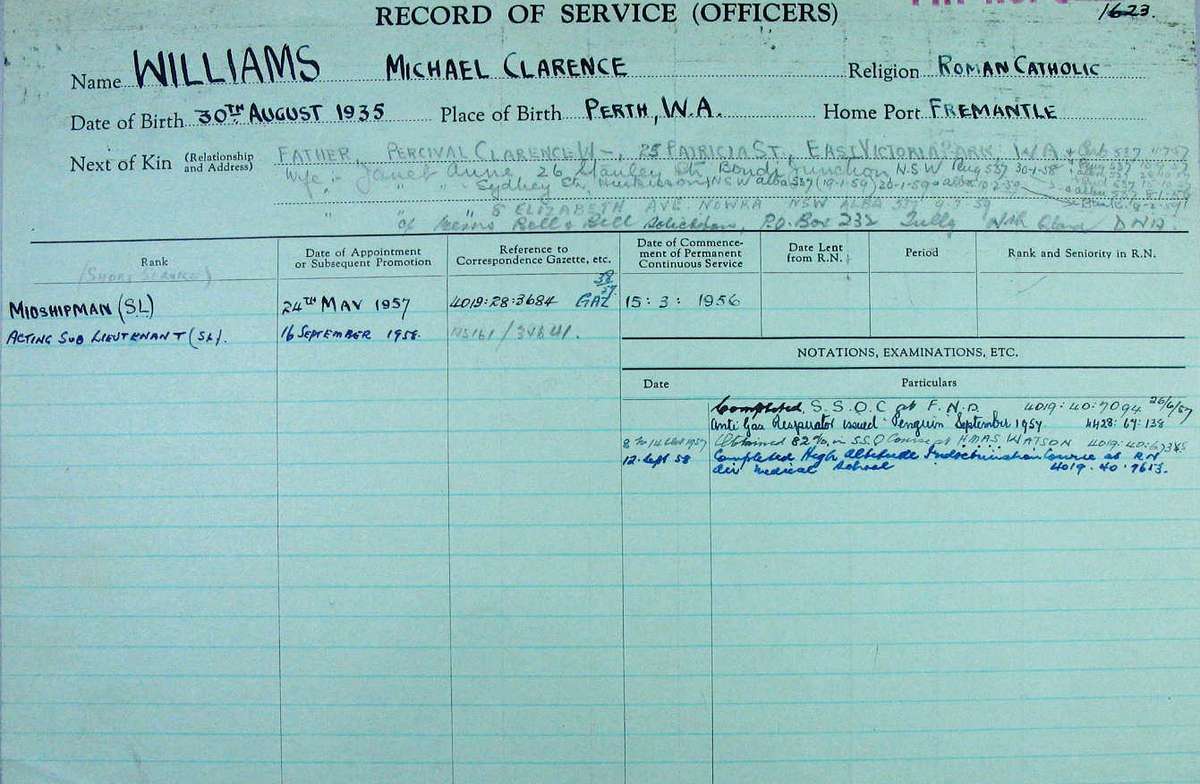 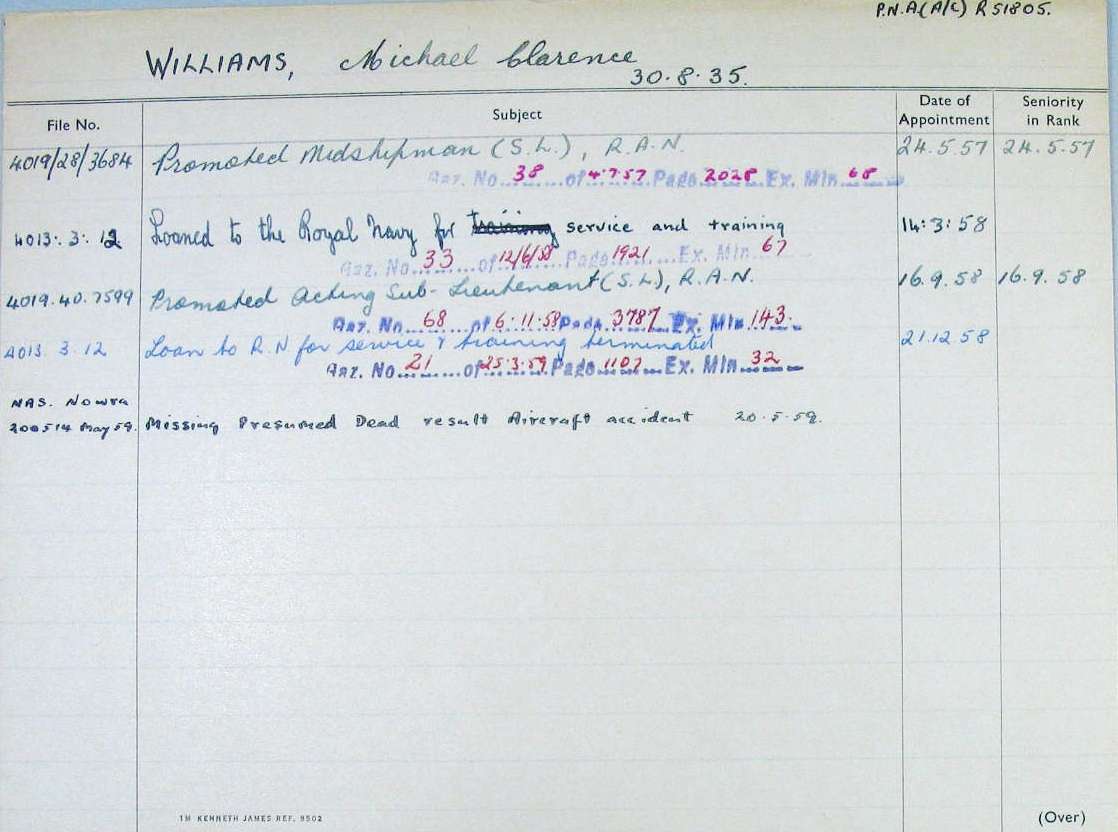