Related Wessex - 824 Articles
Back to Heritage Index
Back to Wessex - Airframe Histori..

Below: Notice of Tender, issued by AUSTENDER on 2 August 2016.   N7-214 is offered for sale to AHO (Australian Heritage Organisation) only.  Noting that the industry briefing in regard to this tender was held at Williamtown, it is likely the aircraft was still there at the time. 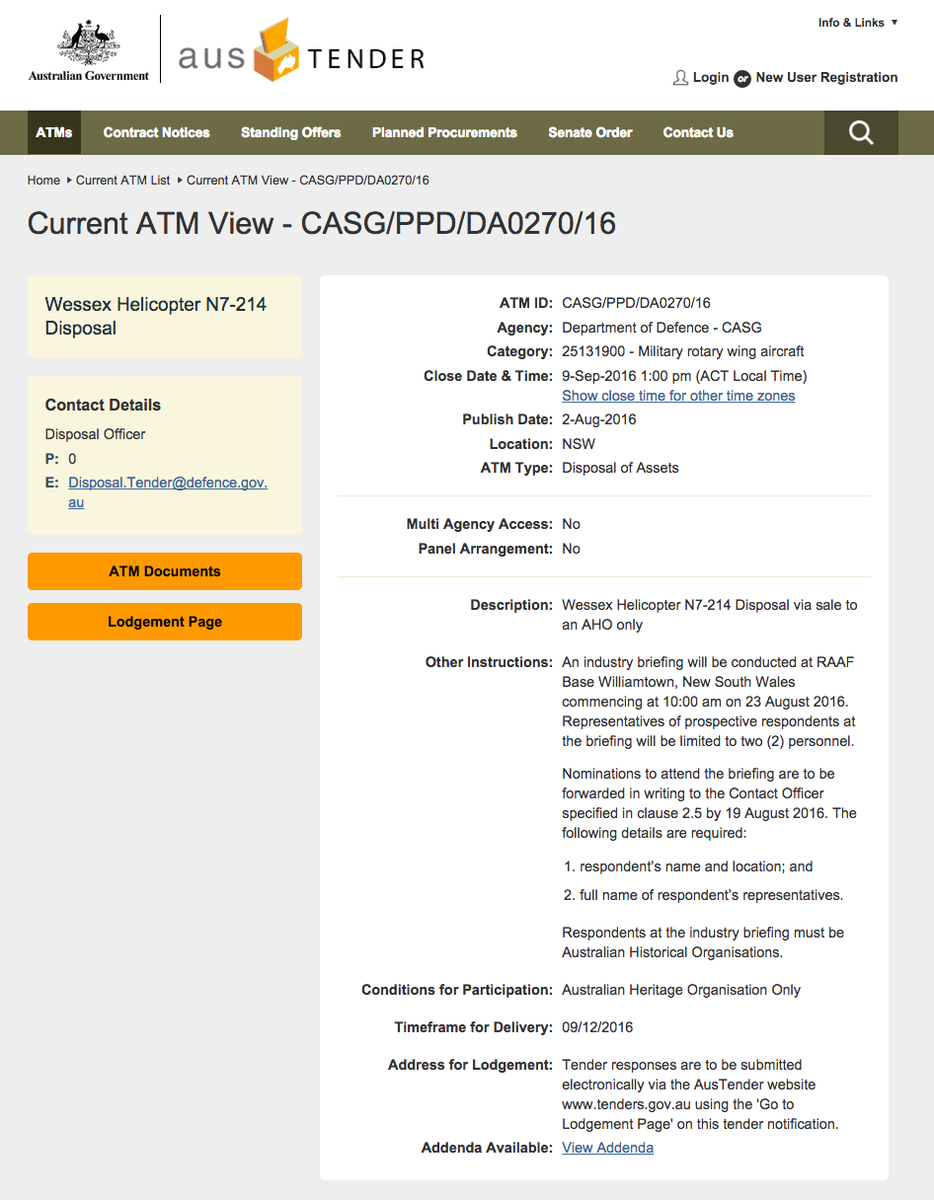 As a result of the above Tender, the Australian Aviation Heritage Centre (Queensland) secured ownership of 214. Warbirds Online was on hand to assist with the recovery and transport of the new acquisition to Caboolture Qld. Australian Aviation Heritage Centre – QLD members and volunteers, along with the support of RAAF and Navy personnel dismantled the aircraft at Williamtown NSW RAAF base in preparation for the move to the AAHC (Qld) base at Caboolture Qld.
The aircraft is a long time resident at Williamtown, having served as a training aid since retirement from service on 31 December 1989. Thankfully the aircraft had been located in a hangar most of its training aid life and although dusty and dirty, was complete and sound.
Work commenced on moving the aircraft on 16th July 2017 with a survey of the aircraft and then implementing the dismantling plan which included removing the main rotor blades, removal of tail rotor, doppler antenna from fuselage belly, port and starboard HF antenna stand-offs from tail cone and fuselage sides, antenna cabling, both main wheels and then the landing gear once the transport dollies were placed in situ to support the aircraft. Then the engine nose-cone was removed and the tail rotor folded back onto the fuselage.
The large Helicopter was then lifted onto a flatbed semi-trailer and securely tied down for the long drive back to Caboolture, a distance of 800 plus kilometers. All of the other components were packed into the fuselage or onto the AAHC Qld trailer for the trip home to Queensland which commenced on Friday 21 July 2017.
The long haul relocation was uneventful and she arrived at her new home safe and sound. Volunteers and members immediately began work to quickly reassemble her main components upon arrival at Caboolture.
It is planned to restore the aircraft to pristine static condition and display her alongside the fellow Vietnam era DHC4 Caribou A4-228 and the airworthy Cessna O-1 Bird Dog to represent this era of Australian Military Aviation.
More photos and history on the Heritage Centre website here.
Or see Channel 10 Qld News coverage of the Wessex move here.